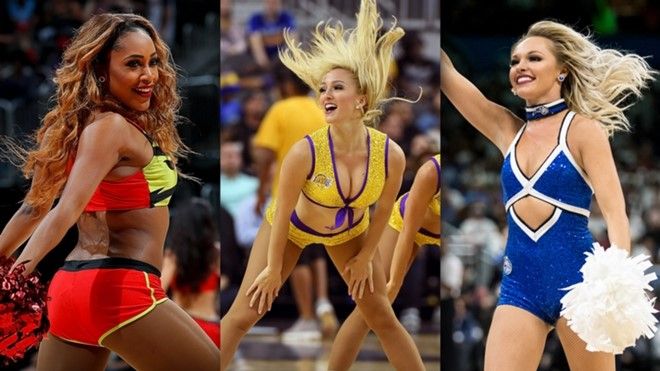 Pro sports isn’t complete without team dancers and cheerleaders. Not at all. We searched the league and found these ten sexy cheerleaders from the NBA’s 2018-19 season:

Klaudia is the youngest member of the Luvabulls but she is already in her second season on the team. Born in Mount Prospect in Illinois, Klaudia studied at Harper College and is a Competition Dance Coach by profession. He first dance job was as a dance instructor at Park District and she once worked as a dental assistant years back.

Klaudia loves cheese fries and her favorite place to eat in Chicago is Parlor Pizza. She enjoys watching shows like Criminal Mind and The Bachelorette. She appeared on Season 3, Episode 16 of the TV series Empire. This Luvabull once owned a Mitsubishi Eclipse GST manual transmission car and revealed that she has traveled throughout the West Coast on an RV. Her weekly workouts include cardio, abs and weight lifting.

You can call her Tawn, Tata or T. Your pick but this 5 year veteran and captain of the Boston Celtics Dancers is our pick. Tawnee hails from Albuquerque, New Mexico and by profession, she is a Student and Victim Witness Advocate. She considers it an honor to represent the most prestigious team in the NBA and to be the Captain of the dance team is icing on the cake.

Her favorite player is Paul Pierce and she loves watching That 70’s show and Chopped on TV. As for her favorite movie, she listed down the Nutty Professor and The Strangers. Tawnee also loves going to the beach and she loves to listen to R&B music while her favorite food are nachos.  According to her bio, Tawnee considers herself as determined, kind-hearted and genuine.

After a multi-awarded high school dance career, Alexis W received multiple scholarships and picked the Dance Department at the University of Southern Mississippi. She danced for four years with the Southern Misses Dance team and then graduated from the school with a degree in Fine Arts in Dance Performance and Choreography.

Post college, Alexis has danced professionally including two years for the NFL’s New Orleans Saints and now for the Atlanta Hawks in the NBA. She has appeared in a Netflix movie called “Dancin’ It’s On” and in the television show “Flip My Food”. She loves to travel and does so every time she has the chance.

25 year old Carolina is in her second year with the Jazz Dance team. From downtown Salt Lake City in Utah, she started dancing at an early age with Radio Disney. She joined the Drill Team and Dance Company when she was in high school before she got the opportunity to dance for two different AFL teams before landing a spot in the Jazz Dance team last season. She says since watching her first Utah Jazz game, it was always her dream to be a Jazz Dancer. Now she is living that dream.

Carolina’s favorite movie is “How to lose a guy in 10 days” and her favorite movie character is “Belle”. She also likes watching the TV show “The Voice” and has a big crush on Liam Hemsworth. She looks up to her sister whom she says is the most dedicated person she knows and she also has three dogs whom she says are like her children. Her favorite food include Oreo and Rocky Road Ice Cream.

Dreams do come true and Kirsten says she is the living proof of that. She used to perform for the Jr. Grizzlies Dance Team and after their rehearsals, she would stay and watch the Grizz Girls and wish she were one of them. Well now she is one of them and is on her third season as a Grizz Girl.

But while dancing is Kirsten’s release from all things, she is an Accountant by profession. Her favorite dancer is Janet Jackson while her favorite TV show is Law and Order. She loves the barbeque and the hospitality of Memphis. Kirsten also adds that if she had the money she would open a non-profit organization for young women to focus on their self- esteem because she believes that every woman deserves to feel beautiful.

Jeanna has been dancing for over 20 years. In her bio, she said that her earliest memory of dance is her first ballet class and how excited she was wearing a pink leotard and tutu. During the last 20 years, she’s made so many memories but her most favorite moment as a DND is her first ever performance during a preseason game against the OKC Thunder ( she remembers the game).

When she isn’t dancing for the Nuggets, Jeanna works as a revenue manager at a hotel. Among her office tasks are to receive positive performance reports and feedbacks on the hotel’s performances. This Denver, Colorado hometown girl lives by the saying: “Worrying does not empty tomorrow of its troubles. It empties today of its strength.” Jeanna isn’t worrying though, not with her fun and upbeat personality.

One of the most popular Pistons Dancers is Felicia who many say looks a lot like Paris Hilton. Aside from dancing, Felicia loves doing make-up and is in fact a make up-artist when she isn’t doing numbers for the Detroit Pistons. Her favorite song to dance to is David Guetta’s Titanium while her favorite dance movie is Center Stage.

In her team bio, Felicia confessed that she doesn’t know how to ride a bicycle and that her biggest pet peeve is running late. She believes that everything happens for a reason and her advice to girls who want to be dancers on a pro sports team is never to give up on yourself or your dream.

Sophie took up Economics and Fashion Marketing at Pace University Pforzheimer Honors College.Aside from being a dancer for the Brooklyn Nets, Sophie is a model signed with Major Models New York. She has appeared in Vogue Runway twice, Hues Magazine and Bmetro Magazine. Sophie has also modeled for Macys and Philosophy.

Born in Malolos, Bulacan in the Philippines, Kyla dazzles the Staples center crowd with her dance moves. She has been dancing since middle school and it was one of her dance teachers, who used to be a Clippers Spirit Dancer, who pushed her to join the group. She did and now she’s in her second year with the team.

Kylie’s dancing background is hip-hop but she also does ballroom but not much. Aside from being a Spirit Dancer, she is busy with her studies (she is a nursing student) and her modelling career. Kylie also works part-time as a dance instructor and is active in community and charity events in her area.

What list would be complete without the most famous cheerleading team in the NBA? The Laker Girls are an icon in pro sports cheerleading and dancing. The group has produced the likes of Paula Abdul, Lisa Joann Thompson, Tina Landon, Emily Harper and Moon Bloodgood.

But our featured Laker girl in this article is the lovely Kianna, who is from Huntington Beach, California and who is a graduate of UC Santa Barbara with a degree in Communications. Kianna is in her first year as a Laker Girl and for sure, this won’t be her last. She likes taking yoga classes and swimming.