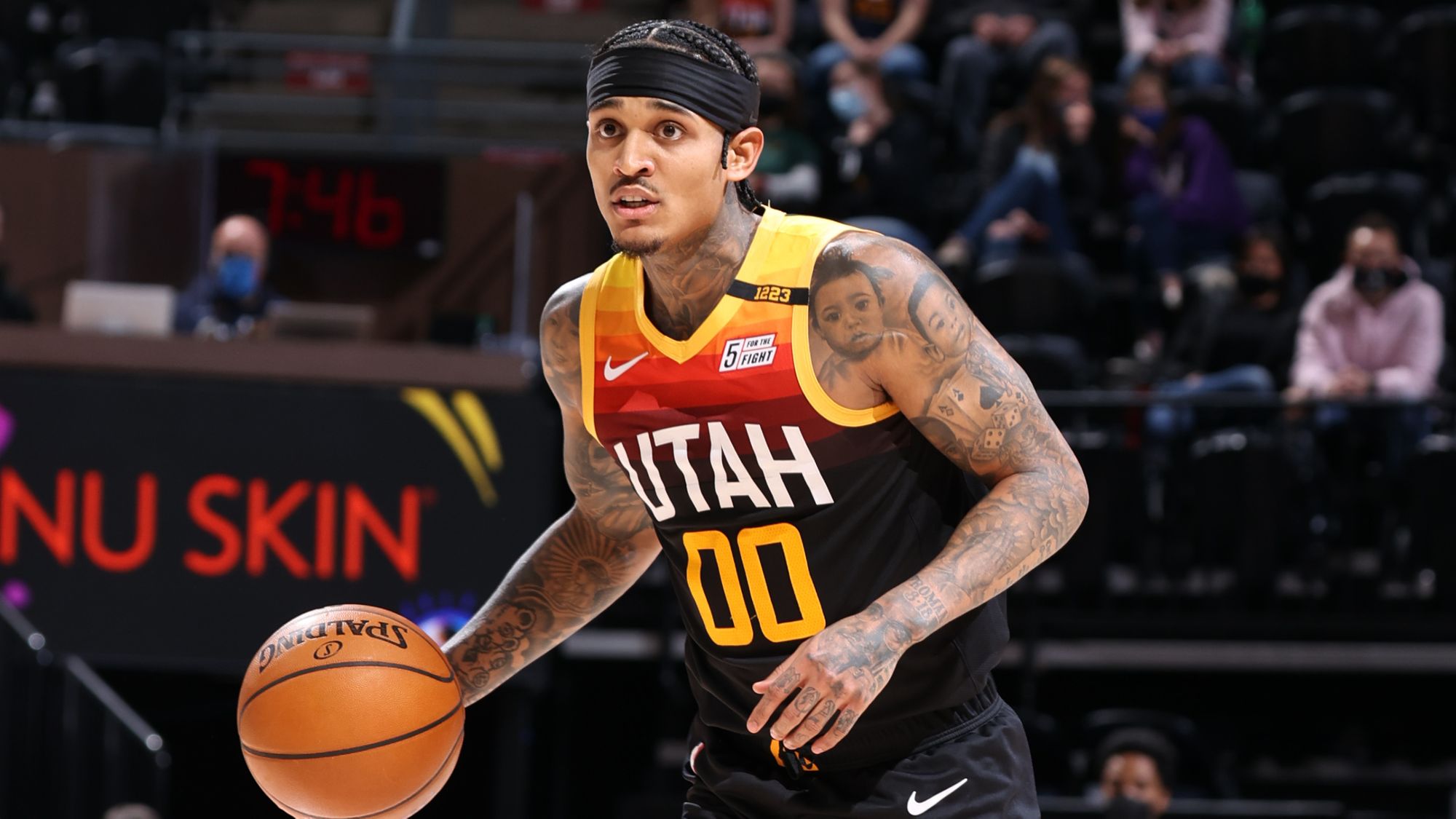 Jordan Clarkson is the best and most productive player off the bench this season. The NBA has announced that the 28-year-old combo guard has won the Sixth Man of the Year award this season, beating out fellow Utah Jazz teammate Joe Ingles and New York Knicks veteran guard Derrick Rose for the coveted individual recognition.

Clarkson, who is on his second year with the Jazz since being acquired in a mid-season trade deal during the 2019-20 NBA season, is currently putting up solid numbers of 18.4 points, 4.0 rebounds, 2.5 assists and 0.9 steals per contest. He is doing all those tremendous stuff off the bench, while logging in 26.7 minutes per contest. He also remained healthy this season, having played all but four games of the Jazz.

But to be able to get to this stage, Clarkson said that it was not easy and that it definitely took a lot of work. As per Sarah Todd of the Deseret News, Clarkson said that having high-scoring and highly-skilled teammates like J.R. Smith, Lou Williams and Jamal Crawford absolutely helped him be the player that he is right now. Clarkson also took the time to give this thanks to Ingles, and then pointed out that their collective goal is to win the NBA championship this season.

“Having a teammate like J.R., Lou Will, and even just having          conversations with Jamal (Crawford), there’s just something they all kind of passed down to me,” Clarkson said. “I remember Lou was big on me in L.A. with slowing down with life and everything, just giving me so much knowledge that I really wasn’t able to accept when I was a young player in the NBA...but all the stuff he told me I really took it into  account as I got older.

This is wild,” Clarkson said. “This trophy does mean something, means a lot of work. But we’re going for something else, we’ve got bigger goals ahead of us and that’s what we’re going to try to go get, we’re trying to get another trophy. One of my closest teammates,” Clarkson said. “We’ve sat in locker rooms where it’s just been me and him and had conversations about my personal life and stuff like that, and he sits across from me on a plane and we hang out. We drink beers together and we should come out with a beer company soon with how many beers we drink on off days.”

Clarkson, who is on his seventh year in the league, was the 46th overall pick in the 2014 NBA Draft. He was selected by the Los Angeles Lakers, and had the opportunity to play alongside the late great Kobe Bryant. Clarkson immediately showed that even though he is a second-round draft pick, he has what it takes to have a long and productive career in the best basketball league in the world.

Ever since he stepped foot into the NBA, Clarkson has been norming double-digit averages in the scoring column. In just his second year with the Lakers, the 6-foot-5 spitfire gunner averaged an all-around stat line of 15.5 points, 4.0 rebounds, 2.4 assists and 1.1 steals per contest. He was a point guard prior to his career in the NBA, but also quickly solidified the scoring facet of his game.

But a couple of years after, Clarkson found himself being traded to the Cleveland Cavaliers. The Cavaliers, who were then chasing a championship through the leadership of LeBron James, looked at him as a quality scorer that they can bring off the bench. But the Cavaliers would lose to Stephen Curry, Kevin Durant, Klay Thompson and the Golden State Warriors during the 2018 NBA Finals.

Clarkson would stay with the Cavaliers for a couple more seasons, before finally being shipped to the Jazz in 2019. Since his first game with the Jazz, there was no doubt that they both needed each other. As per an interview with Tony Jones of The Athletic earlier this month, Clarkson said that the Jazz organization gave him the freedom to be the player he wanted to be. Clarkson says that it only shows how appreciative he is of the valuable role that the Jazz coaching staff has in store for him right from Day 1.

“The organization has let me be myself, and that’s meant a lot. So, winning the Sixth Man of the Year would mean a lot. I don’t need it for validation. My teammates and coaching staff and the organization have given me that. So, I can let my work speak for myself. It just means there’s an appreciation for my role and for what I’ve grown into. It shows a lot of growth period and figuring things out. It shows that I’ve been accepted in the league. I had a lot of doubters growing up. So, I just have to take the constructive criticism for what it is and keep trying to improve.

It’s taught me to lock in and take advantage of the opportunity. It’s taught me to not take anything for granted. The trade was definitely a lot to take in. I didn’t know what to expect. But when I got here, the team, the coaching staff, the city and the fans, they welcomed me with open arms. The Jazz showed they invested with me and made me feel comfortable. I feel free here.”

As for Clarkson’s competition for the Sixth Man of the Year award this season, there is no doubt that Ingles also deserved to win the award. Ingles, who is also on his seventh year in the league, is putting up his own set of all-around numbers of 12.1 points, 3.6 rebounds, 4.7 assists and 0.7 steals per contest.

Just like Clarkson, Ingles is only averaging 27.9 minutes per game, a great indicator of just how efficient his minutes are with the Jazz. Ingles has always been a Swiss Knife of a player. Aside from being a great shooter, which is evident in his career-high 45% clip from the three-point line this season, Ingles is also excellent at facilitating the Jazz’ offense and hitting his open teammates with accurate assists.

On top of all those qualities, Ingles has never suffered a major injury in his career. He has always been great at remaining healthy, which we all know is quite a skill nowadays. So why and how did Clarkson beat out Ingles for the Sixth Man of the Year award this season?

Jones said that the fact that Ingles already started 30 games for the Jazz this season could have been a factor. Jones also reiterated that Clarkson was a better fit for the sixth man prototype in the NBA.

The main reason Clarkson won over Ingles is that Clarkson by true definition of the award was a sixth man and Ingles wasn't. Ingles started 30 games for the Jazz, and when he did come off the bench, it was more as a seventh man. Also, the sixth man typically goes to a pure scorer, and Clarkson fits that type more than Ingles, who is an all-around player capable of doing a little of everything. In the end, the Jazz had two terrific players coming off their bench.

Clarkson is vital to the Jazz for two reasons. He's a fearless and dynamic scorer, who has fortified the bench and allowed it to thrive in the last year and a half. He and Donovan Mitchell are masters at creating their own offense, which counters the rest of the Jazz roster that normally runs a structured offense. Clarkson's fit with the Jazz has been seamless, on and off the floor. He's embraced his role, and the Jazz have embraced his strengths and incorporated what he does well with aplomb.

But of course, Clarkson and Ingles are not just gunning for an individual award this season. The Jazz ended the regular season with the best record in the league, and they are bent on making a deeper run in the playoffs this year. They were ousted by Nikola Jokic and the Denver Nuggets in the first round of the playoffs last year, and they surely want to bounce back from that disappointment.

But to get to the second round of the playoffs this season, the Jazz have to get rid of star point guard Ja Morant and the resilient Memphis Grizzlies. The Grizzlies won two games in the play-in tournament, earning the last playoff spot in the stacked Western Conference.