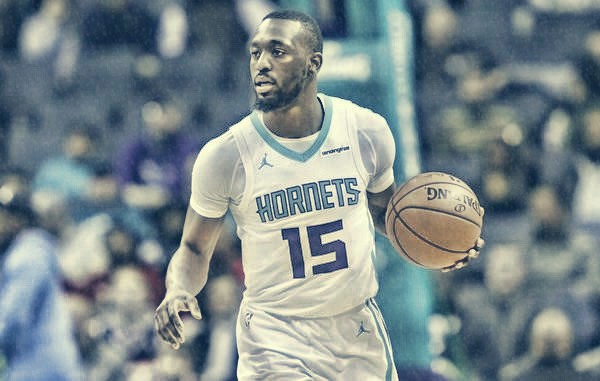 The Charlotte Hornets have reportedly made superstar guard Kemba Walker available in trade discussions. Loaded with bad contracts, the Hornets are reportedly willing to include Walker in a big trade that will involve unloading one or more of Charlotte’s ‘undesirable’ contracts.

In a report from ESPN, the Hornets have already made available Nicolas Batum ( $100M, 4 years ), Dwight Howard ( $47M, 2 years ), Marvin Williams ( $42M, 3 years ) and Michael Kidd- Gilchrist ( $39M, 3 years ). But the four are difficult to shop in the market mainly because of their contracts, hence the Hornets are willing to package Walker along with one or more of them.

The season has not turned out well for the Hornets who are currently at 18-25 and at 11th place in the Eastern Conference. With the team likely headed to the lottery and the trade deadline nearing, the Hornets look to shed some contracts while attempting to pick up new assets who could finally push them to the level of title contenders.

This is the first time in Walker’s career that his name has been included in trade rumors and although he is the Hornets’ franchise player, he could be seriously on the move before the trade deadline.

Here are potential trades that the Hornets could make for Kemba Walker, as approved by ESPN’s trade machine: 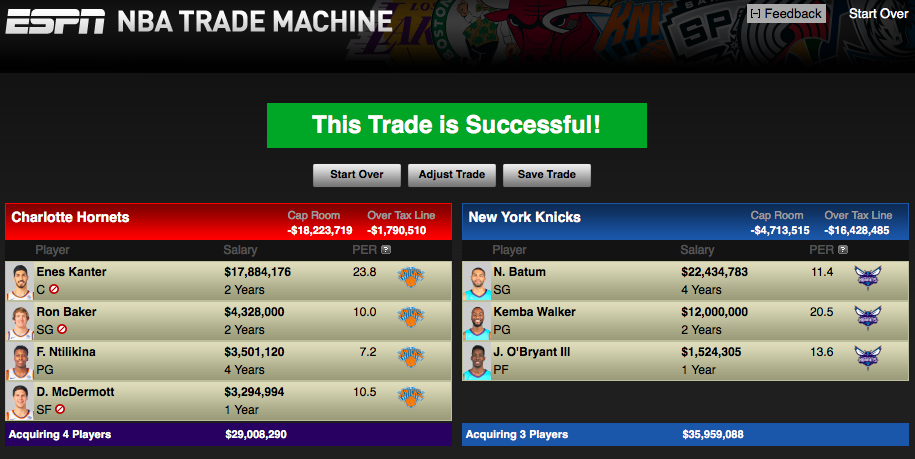 The New York Knicks have began their rebuild by trading Carmelo Anthony last summer and giving the keys to the team to their unicorn, Kristaps Porzingis. They’ve also added young players like Enes Kanter, Doug McDermott and Frank Ntilikina who could be a good part of their future as supporting cast to Porzingis. But halfway the 2017-18 season, the Knicks are out of playoff contention and while they have made some improvements from last season, it’s not been enough.

Frank Ntilikina may be the point guard of the future. But with Porzingis beginning to play like the franchise player that he should be, the Knicks can’t wait for Ntilikina to develop. In order to fast forward their rebuild and give Porzingis the playmaker he deserves, they need a premier point guard to run the show.

New York experimented with starting Jarrett Jack but after a couple of good results, it has not worked. The Knicks are currently trying out Trey Burke but it doesn’t appear that he’s going to be the long term solution for the Knicks. Having said that, acquiring Kemba Walker would change all that.

The return should not be a problem for the Hornets who will get Ntilikina and several serviceable young players from the Knicks. But for the Knicks to get Walker, they should foot Batum’s bill. At 29, Batum would still be an asset for the Knicks. A two-way guard, Batum gives New York a little bit of everything. The key however is getting Walker, a New York native.

The Detroit Pistons are reportedly interested in joining the Kemba Walker sweepstakes. That doesn’t come as a surprise because the Pistons have struggled since the Christmas Day injury to Reggie Jackson. Jackson isn’t expected to return until at least after the All-Star break so the Pistons could really need some help in the backcourt.

Should Detroit pursue Walker, then there would be no need for Jackson to return because they play the same position. But because Jackson is currently on the injured list, the Pistons need to sweeten the deal by adding shooting guard Avery Bradley and young player Stanley Johnson. They would definitely qualify as the ‘young talents’ that Charlotte wants in exchange for their franchise player.
In giving up Bradley, the Pistons lose their starting SG. But in getting Walker, they will have to pay the price of getting Nicolas Batum’s bad contract. However, Batum is a shooting guard who has some resemblance to Avery Bradley. The main difference between the two is that Batum is expensive.

Stanley Johnson has shown improvement this season and is slowly showing us the reason why he was the Pistons’ 8th overall pick in 2015. He should be a good find for the Hornets along with Bradley, who is one of the best defensive guards in the NBA today. 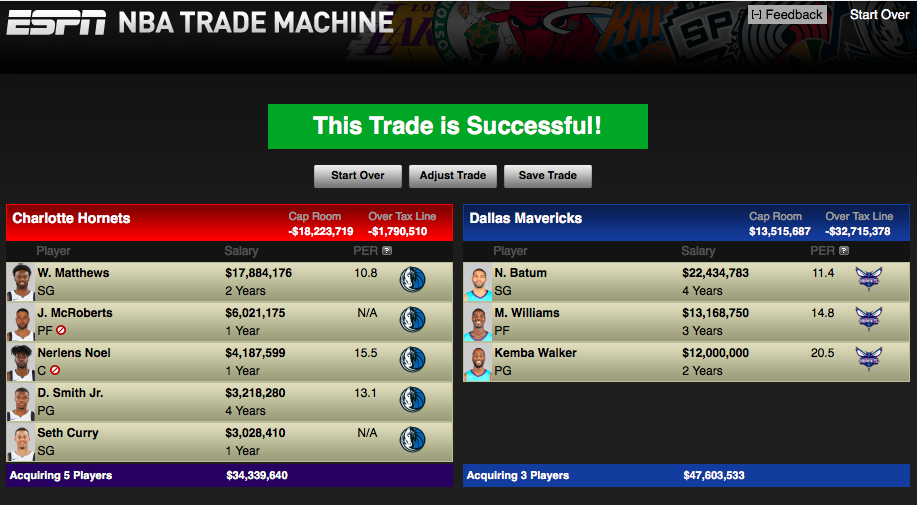 The Dallas Mavericks already have their point guard of the future in Dennis Smith Jr. Smith was considered as the steal of the draft before the start of the 2017-18 season. But as the season progressed, Smith has been overshadowed by late first round picks like Donovan Mitchell of the Utah Jazz and Kyle Kuzma of the Los Angeles Lakers.

To his credit, Smith is playing like the steal that he was said to be in the month of January. In 7 games played so far, Smith is averaging 17.6 points, 5.3 assists and 1.4 steals per game. But because Smith is owed just over $3M, the Hornets have to take in a big contract from the Mavs. That should be Wesley Matthews.

Man for man, the Hornets would be losing Nicolas Batum. Matthews should fill in Batum’s role with the team immediately. Matthews hasn’t lived up to expectations in Dallas but at 31, he can still hit the three pointer and do some damage. Contract wise, Matthews will be expiring in two years will Batum is still owed four. So that’s still a bonus for the Hornets.

Nerlens Noel, Seth Curry and Josh McRoberts have expiring contracts so the Hornets will not have only unloaded Marvin Williams and Batum, they will have more cap space next summer. Why Marvin Williams and Nicolas Batum to the Mavs? Dallas had interest in Batum and Williams before so they’d probably take both in in order to get a franchise player like Walker on board. 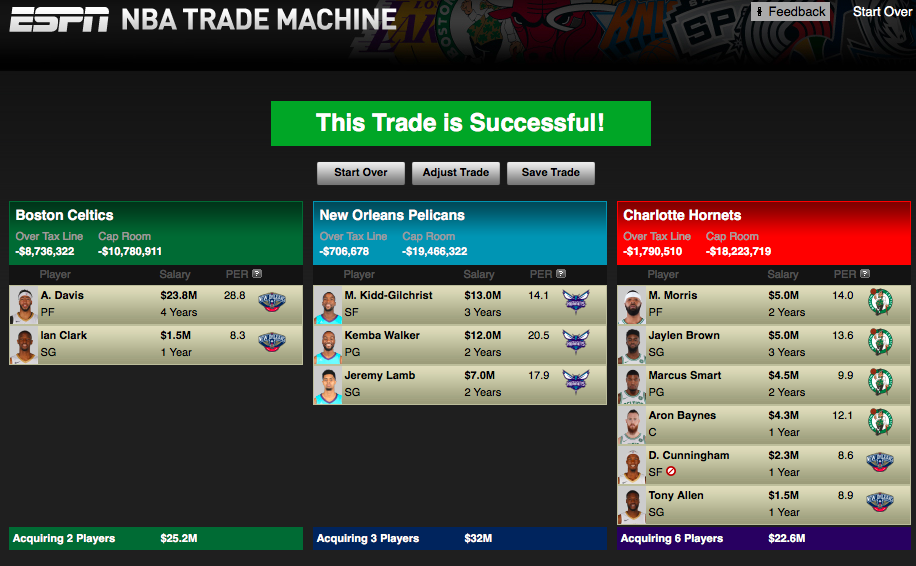 The rumor of Anthony Davis going to the Boston Celtics refuses to die. But that’s only because the Celtics appear to be seriously pursuing the Brow. New Orleans has said that the only way for Davis to be traded to Boston is if the Celtics give them the New England Patriots and the two planes they recently bought. That’s funny. But what if the Pelicans were offered another franchise player in exchange for their own franchise player? That may be a different story.

Getting Kemba Walker, Michael Kidd Gilchrist and Jeremy Lamb would be an equitable return for parting with only Anthony Davis. As for the Hornets, they wouldn’t only be getting Marcus Smart and Jaylen Brown but Boston will sweeten the deal with the Sixers’ pick they got in the Jayson Tatum deal. Now that pick could be valuable in the 2018 Draft, given the depth and the Lakers’ woes.

Boston would be sad to part with Smart and Brown but they still have Rozier plus Ian Clark as an extra piece in the trade. But the bottom line is getting Anthony Davis whom the Celtics believe will be the final piece of their championship puzzle.

But the decision will likely depend on what LeBron James does next. There are rumors that the King is leaving the Land a second time and should that happen, the kingdom will be in ruins. But not if they get a franchise player first. In this trade, the Cavs get Kemba Walker plus assume Dwight Howard’s contract with the Hornets. Now Howard is no longer the same dominant force he was in his youth but he is still a serviceable big man who can help the Cavs in the playoffs.

In getting Walker, Cleveland must part with Tristan Thompson and J.R. Smith. Smith will be the excess baggage for the Hornets but given that they will get a 26 year old all-star potential in Tristan Thompson plus the pick that the Cavs got from the Celtics in the Kyrie trade.

That pick is the Brooklyn Nets’ 2018 first round pick and given that the Nets got the first pick in the previous draft lottery ( but yielded it to the Celtics in the Paul Pierce deal ) there is a chance that it’s going to be a high lottery pick in the 2018 NBA Draft. Brooklyn’s scrappy team is doing okay with 17 wins but it’s still too early to tell. The Nets could end up in the bottom of the standings and given the depth of next year’s draft class, the Hornets might covet it.

So where do you think Kemba Walker is headed? That is if the Hornets do trade him at all? The NBA’s trade deadline is on February 8th 3PM ET. It’s going to be interesting to see if Walker is indeed moved and where.