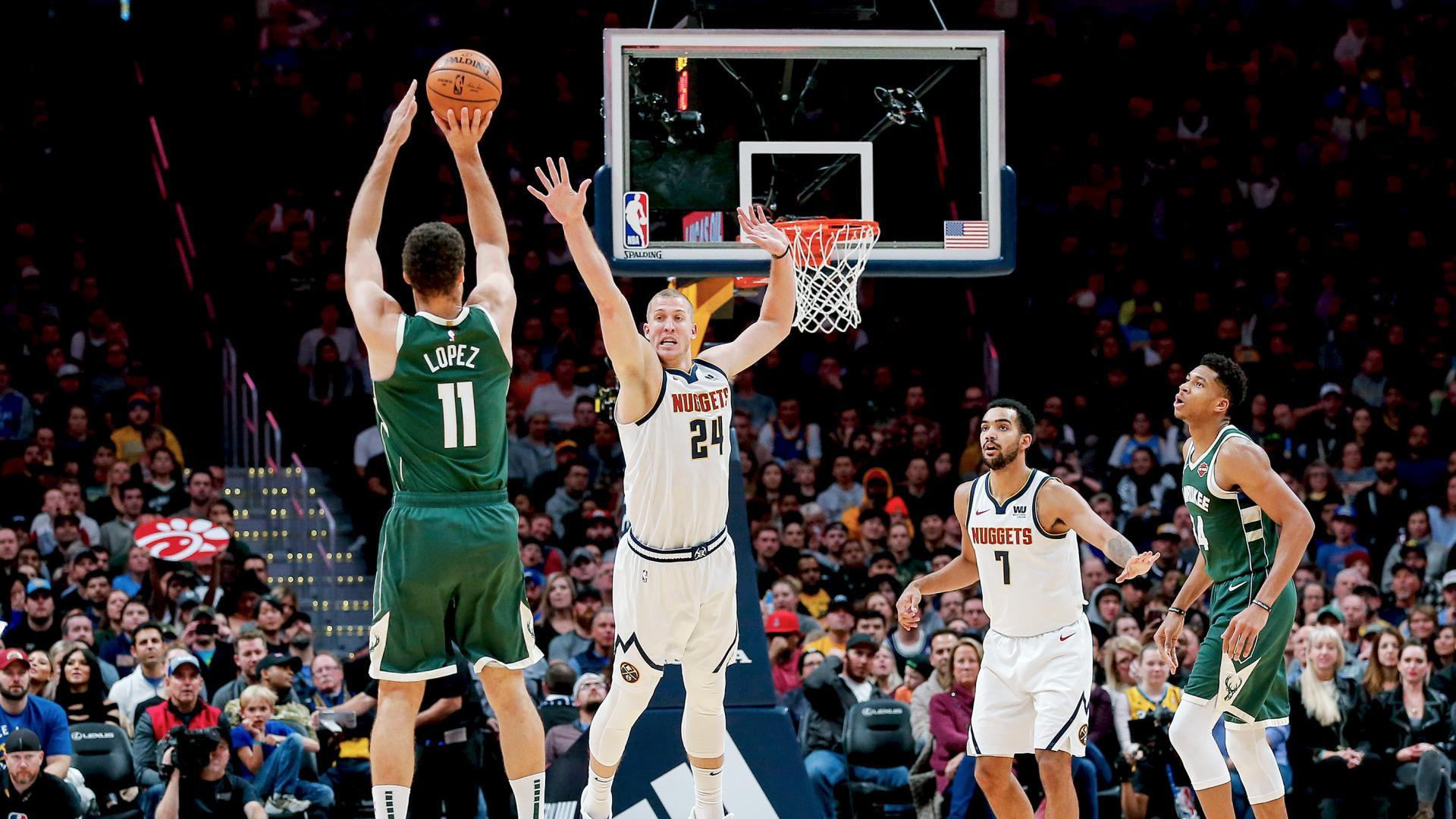 Last month, Golden State Warriors shooting guard Klay Thompson broke out of an early season shooting slump by setting a new NBA record for most three point baskets made in a single game. Thompson entered the Dubs’ October 29th game against the Chicago Bulls shooting just 5-36 from behind the arc. The Splash Brother made 10 three pointers in the first half alone and left the game with the record in the third quarter. Imagine what he would have come up with had Steve Kerr let him play. But this isn’t about Klay Thompson. This is about big men who shoot like Klay Thompson and in that category, we can name a handful of big men who can shoot the three ball like the best of them can.

One of the big men noted for his ability to drill the three pointer is Brook Lopez of the Milwaukee Bucks. Lopez was the former franchise player of the Brooklyn Nets. He was the 10th overall pick out of Stanford by the then New Jersey Nets in 2008. Since his arrival in the NBA, Lopez has always been known for his feathery touch. Since the 2016-17 season, Lopez has expanded his smooth stroke to the three point area.

On Sunday, Lopez made a career best 8 three pointers while scoring 28 points to help the Bucks snap an eight game losing streak in Denver as the Milwaukee Bucks beat the Denver Nuggets 121-114.

"That was an interesting experience," Lopez said after the Nuggets began face-guarding him at half court later in the game in a bid to slow down his perimeter shooting. "I'm just super proud of our team, especially after the Clippers game (a 128-126 overtime loss Saturday on a last-second Los Angeles basket). I think we all feel we let that one get away. To see the way we committed on the defensive end, especially after they made that run to start the fourth. That was so big and I think definitely shows what we're capable of because that's a great team that we just beat."

Lopez has become a three point threat in the last three seasons but it’s interesting to note that he didn’t make a single three pointer in his first six NBA season. Right now, he’s made at least six three pointers in three out of his last four games and went 8-13 on Sunday night.

According to ESPN Stats and Info, Lopez is only the third seven footer in NBA history to make 8 three pointers in a single game. The other two are Dirk Nowitzki and Lauri Markkannen:

Arguably the best three point shooting 7 footer in the history of the game, Dirk Nowitzki revolutionized the game by becoming the prototype for the Stretch Four Position. While Nowitzki didn’t play center, he played power forward. At a time when the power forward position was linked to Karl Malone, Nowitzki changed the game with his sweet shooting touch.

Dirk is a career 38.3% three point shooter. He’s made a total of 1,918 three pointers, the most by any seven footer in the history of the NBA.

Lauri Markkanen was the 2nd seven footer in NBA history to make at least 8 three pointers in a single game. Markkanen accomplished the feat during the Chicago Bulls’ 122-119 overtime win over the New York Knicks. Markkanen played a total of 46 minutes in that game while scoring a career high 33 points.

Markkanen was the 7th overall pick of the 2017 NBA Draft by the Minnesota Timberwolves but traded to the Chicago Bulls as part of the Jimmy Butler deal. He averaged 15.2 points per game as a rookie and shot 36.2% from deep. 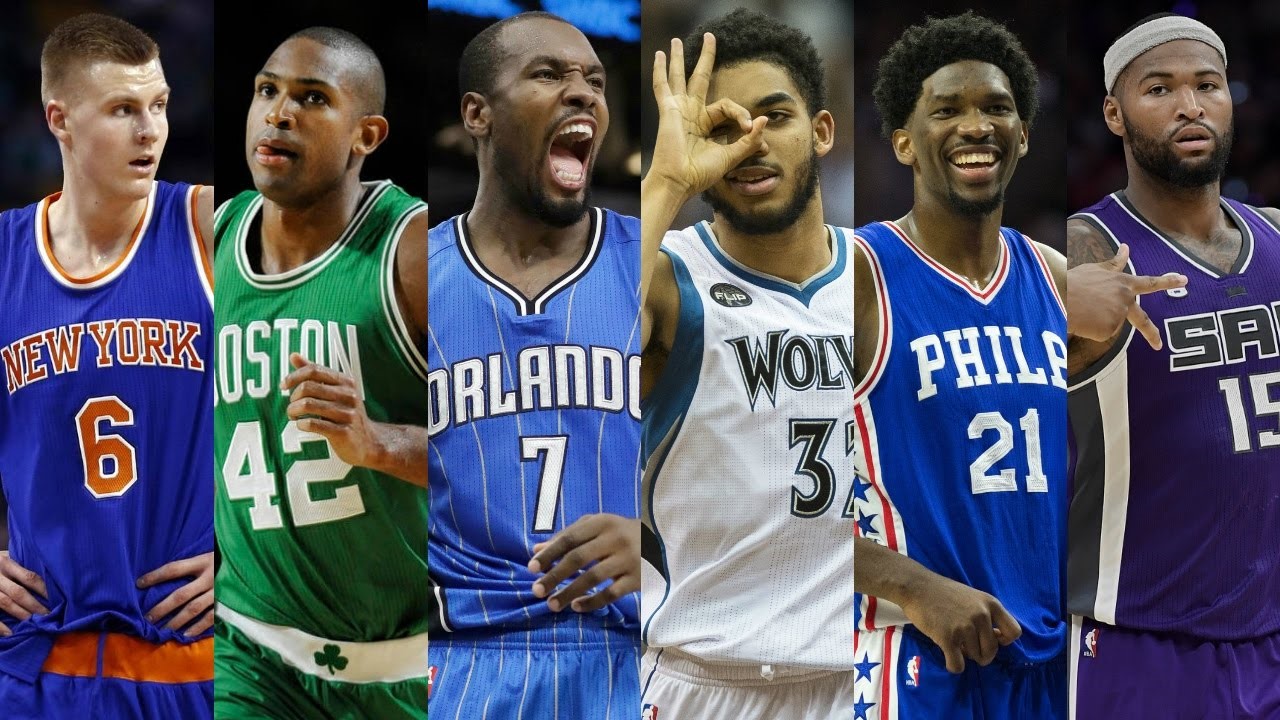 Here are the list of the other natural centers in the NBA who’s made at least six three pointers in a single NBA game:

In this current NBA era where the three point shot has crowned champions, big men called unicorns have the ability to shoot three pointers. We’ve mentioned guys like Marc Gasol, Joel Embiid and Nikola Vucevic. But there are others like Nikola Jokic, Karl Anthony Towns, Kristaps Porzingis and DeMarcus Cousins who can step out of the shaded lane to knock down the three ball consistently. In the past decades, we’ve also seen the likes of Sam Perkins, Arvydas Sabonis, Raef LaFrentz, Brad Miller, Bill Laimbeer and Manute Bol to name a few who could score regularly from behind the three point region.

Last season, five centers made at least 100 three pointers in a single season. These were Towns, Lopez, Jokic, Gasol and Cousins. Boston Celtics starting center Al Horford, who is also an excellent three point shooter, made 97 three pointers last season. Horford led all centers in three point percentage last season at 42.9%. Only Horford and Karl Anthony Towns (41%) were the only centers in the NBA last season to shoot at least 40% from behind the three point ares. It’s still too early this season but there are currently four centers who are shooting at least 40% from behind the three point area and these are Marc Gasol (46.2%), Brook Lopez (41.9%), Nikola Jokic (41%) and Karl Anthony Towns (40.6%). Given how far the shooting range has expanded for NBA big men and how good they have been in shooting the three ball in recent years, it won’t be surprising to see one of them make 10 three pointers very soon.