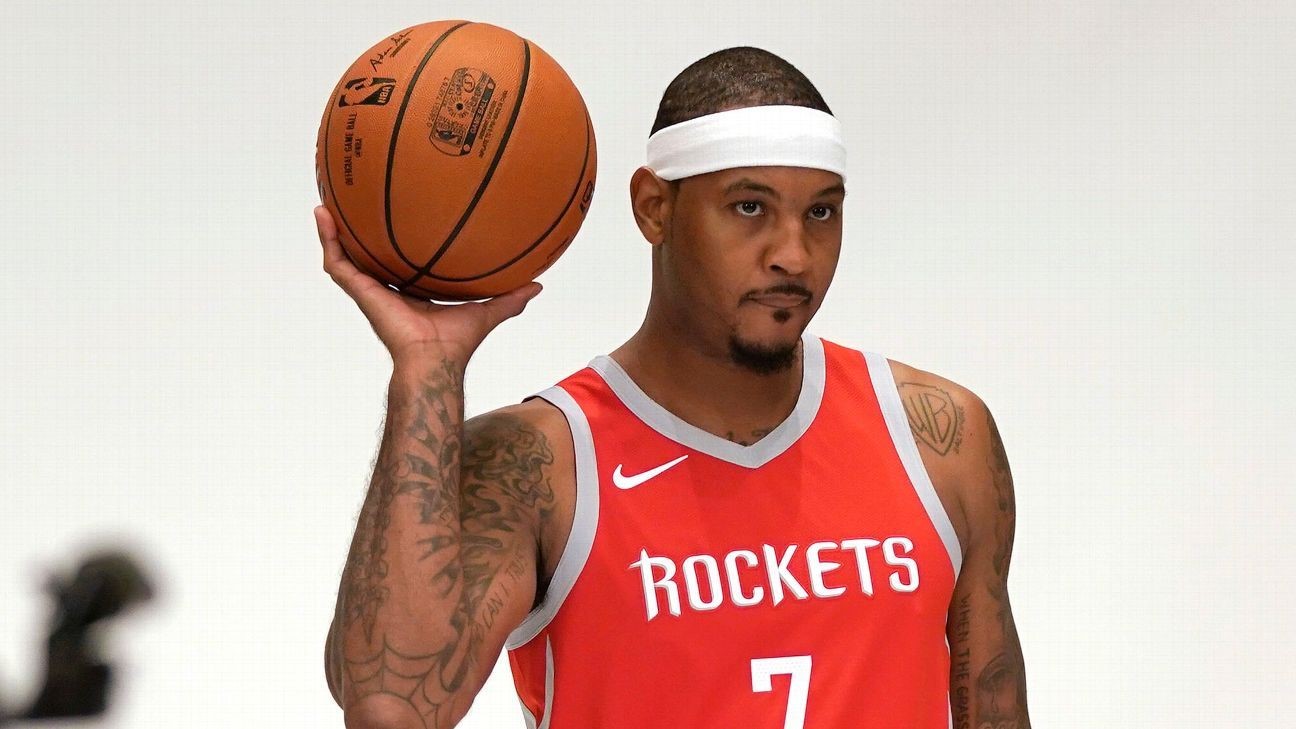 Carmelo Anthony Now “Open” To Coming Off the Bench For Rockets

Who doesn’t remember Carmelo Anthony’s “Who me?” reaction when he was asked if he would come off the bench for the Oklahoma City Thunder last season?

Last July, Anthony was asked about the same topic again and while he didn’t say it black and white, Melo still sounded like he didn’t want to come off the bench:

"I know how to play this game of basketball. I've been playing it for a long time. When I feel like I'm ready to take that role, then I'll take that role. Only I know when it's best for me to take that role. I'm not going to do that in a situation where I still know my capabilities and what I can do. And at the end of the day, the people who really matter know my capabilities and what I can still do. You start getting to the media and debates, it's going to always be kind of back-and-forth."

Many believed that Anthony’s hard stance on starting or coming off the bench could become an issue with his new team, the Houston Rockets. But it appears like Melo has finally mellowed and is now open to playing off the Rockets’ bench.

Melo Has Mellowed Down 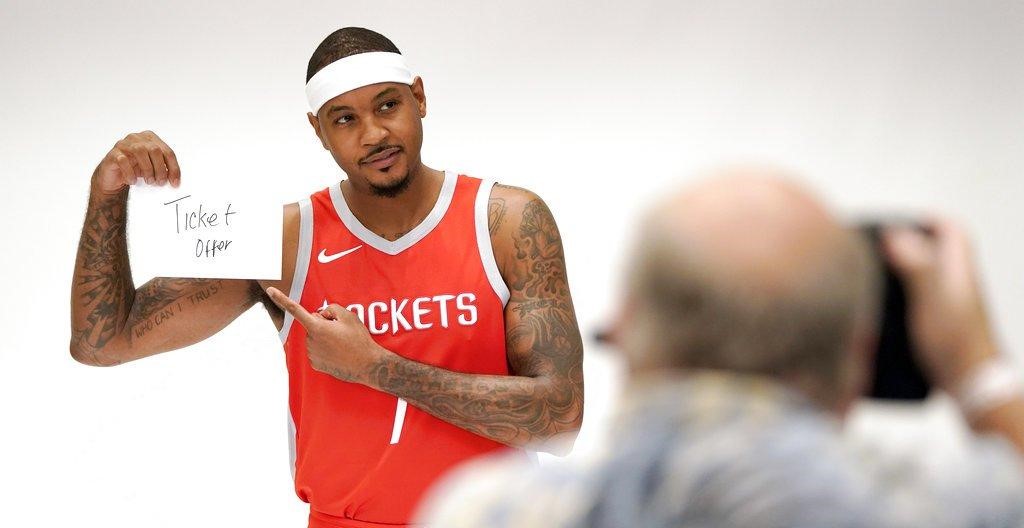 During Media Day on Monday, Melo was signing a different tune. Although he did not flat out say that he was willing to do so, Anthony’s statement sounded like he was “open” to doing so. Said Anthony to reporters:

While the first portion of Anthony’s reply further clouded the matter, the last line in the paragraph is a very welcome sign that Melo has indeed mellowed down from a year ago. When Anthony says “whatever”, he is clearly opening himself to the possibility that he might come off the bench for the Rockets this season, even if that would mean sacrificing an All-Time record that may be within his reach before the 2018-19 season is over.

Anthony has started all 1,054 games of his career which is the second most consecutive starts to begin an NBA career, behind only Patrick Ewing’s All-Time record of 1118. With the NBA’s 82 games regular season, Anthony can easily pass Ewing if he starts the first 65 games of the upcoming season. But with the Rockets more concerned about dethroning the Golden State Warriors as NBA champions, Melo’s streak may be in jeopardy.

Not An Automatic Starter

While there is a vacancy in the Rockets’ starting forward position because of the departure of Trevor Ariza to Phoenix, Melo isn’t automatically the starter just because he is Carmelo Anthony.

"You can't discount that," D'Antoni said. "Again, we'll look at everything. To me, P.J. Tucker is one of the best players in the league. Here's a guy that maybe plays the best defense in the league. That's half the game right there. He might be the best, if not one of the top five. Now you've got a guy who as a starter shot [39.1] percent from 3, [46.7] percent in the playoffs. Really, there's a lot of guys shooting better than that? And a guy that will get every loose ball, every chemistry play, every play he is playing all out. I don't know how we judge people. That is a great player. He is a great player on our team."

Even if Anthony slides down to his natural small forward position, he isn’t also without competition for that starting position. The Rockets signed forward James Ennis III in free agency and the athletic 28 year old who started 58 games for the Memphis Grizzlies the past two seasons is believed as the shoo-in for Ariza’s old role.

Ennis averaged 7.1 points, 3.1 rebounds and 1.0 assists last season but his length, athleticism and ability to play defense which may put him ahead of Anthony in the Rockets’ rotation.

Aside from Ennis and Tucker, Houston also acquired Marquese Chriss from the Phoenix Suns in a trade for Ryan Anderson. Although Chriss is considered a work in progress, the former 8th overall pick in the 2016 NBA Draft is a potential who could blossom under D’Antoni. While Chriss won’t take a starting spot, he’ll surely take away some of Anthony’s playing time if indeed D’Antoni plays him at power forward. This isn’t even counting Gerald Green, who shot 36.9% from behind the three point line last season. Green is listed as a shooting guard but also played meaningful minutes as the Rockets’ small forward.

So with many role playing forwards in Houston, Anthony’s starting role and even playing time isn’t guaranteed.As for D’Antoni, he remains non-committal about Melo’s role in Houston. When D’Antoni was asked about the matter on Monday, the Rockets’ bench tactician simply said:

"We'll see how it fits," D'Antoni said. "I don't know how they play together, they fit together. We have a great analytics team that will help [in addition to] gut feel. We do a lot of it scientifically, that this is the best way to go."
If Anthony and D’Antoni can be on the same page, the better it will be for the success of the Rockets. The chemistry though between coach and player will be tested because this is not the first time that D’Antoni will be coaching Carmelo Anthony.

But years have passed since their first team-up and Anthony said when he signed with the Rockets that he and his former coach are in better terms now. Said Melo:

"When Mike was trying to run his system in New York, the timing wasn't right," Anthony said. "We both acknowledge that. I'm glad he was able to understand that. This is our second chance to rewrite our story."

If they can rewrite their history, maybe Houston will etch its name in history too. Houston was one win away from eliminating the Golden State Warriors during the 2018 Western Conference Finals but an injury forced Chris Paul to miss Games 6 & 7 in Houston. The Warriors won both games and went on to win their second straight NBA titles and their third in four seasons. As for the Rockets, they went back to the drawing board thinking what if CP3 had not been hurt.

Rockets’ GM Daryl Morey said last season that the NBA has become an arms race with Golden State having most weapons. But with the addition of Carmelo Anthony, Houston has certainly upgraded their offensive arsenal. Melo may be coming the worst season of his NBA career, but he isn’t the NBA’s 19th all-time leading scorer for nothing. If he can get assimilated to the Rockets the soonest and he puts his pride on the side, Houston does have a legit chance of dethroning the Dubs this season.