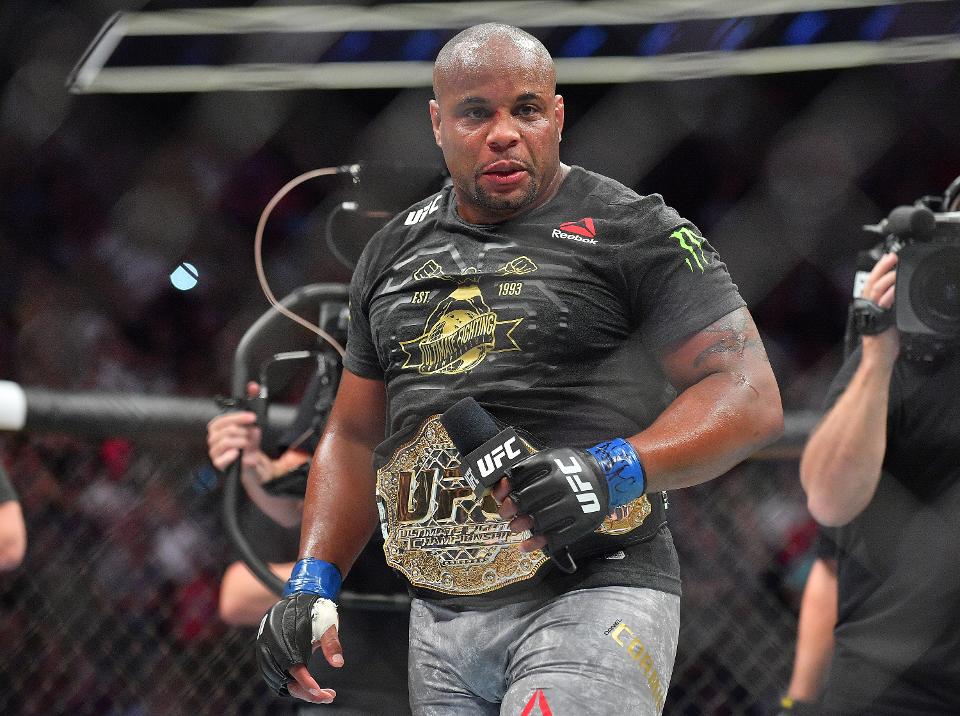 Daniel Cormier is the new UFC heavyweight champion. That’s correct, not a typo.

The 39 year old light heavyweight champion moved up in weight to challenge Stipe Miocic at the main event of UFC 226 at the T-Mobile Arena in Las Vegas, Nevada on International Fight week. He went home with the biggest prize of them all and the right to be called the baddest man on the planet.

Cormier shone in the biggest fight of his life, knocking out Miocic at the 4:33 mark of the very first round. Miocic entered the bout with the most successful title defenses in the history of the UFC’s heavyweight division. But what the likes of Alistair Overeem, Junior Dos Santos and Francis Ngannou could not do, Daniel Cormier did.

Miocic stung Cormier several times in the opening minutes of the contest. But DC kept his composure and late in the round, he found an opening after a clinch. He landed a right hook that dropped Miocic flat on his back. Four unanswered punches after that forced referee Marc Goddard to put a halt to the contest.

According to Cormier, he and his trainers noticed that Miocic had a tendency to drop his hands coming from the clinch. They prepared for that and waited for the opportunity. Cormier cashed in and now he has earned the right to be called a true champion in the UFC.

DC is actually a two-time light heavyweight champion. But he won his first title after Jon Jones was stripped of the belt. His second title came to him on a silver platter after Jones was found guilty of PED use in their last fight. Cormier lost to Jones twice but is now a two time 205 pound champion like Bones.

After Saturday night, Cormier is now also the UFC heavyweight title. With the victory, DC joins Conor McGregor, Randy Couture and B.J. Penn as the only fighters to win world titles in two different weight classes. Cormier is also only the second fighter to hold two belts simultaneously.

While Cormier’s victory was a bright moment for UFC 226 after the expected heavyweight war between Francis Ngannou and Derrick Lewis turned out to be a dud, the event ended in bad taste after former UFC heavyweight champion Brock Lesnar stole the spotlight.

But for all the drama and history made at UFC 226, the UFC ruined everything by allowing Brock Lesnar to come up inside the octagon after Cormier’s win. Some people call it staged and even if it weren’t Lesnar being permitted to enter the ring without legitimate business inside it was all planned.

The UFC is badly bleeding for PPV buys and 2017 was one of the worst in the history of the promotion. In fact, the only reason why the UFC survived 2017 on a positive note was because of its share in the Mayweather-McGregor PPV revenue. Other than that, events bombed out one after the other. And with McGregor nowhere in sight, the UFC needs a homerun in 2018.

The UFC tried to resurrect Georges St. Pierre in the hopes of perking up their PPV numbers. But after GSP’s comeback fight against Michael Bisping at UFC 217 generated 875K PPV buys in November 2017, St. Pierre has chosen to retire again. With St. Pierre gone again, perhaps forever this time around and McGregor still not available, perhaps UFC President Dana White remembered Brock Lesnar.

Before McGregor arrived in the picture, Lesnar was the UFC’s top PPV draw along with St. Pierre. In fact, Lesnar’s UFC 100 win over Randy Couture was the UFC’s top selling PPV event of all-time before McGregor broke the record twice. Lesnar fought nine times in the UFC, eight were PPV events and five of those he headlined. With that kind of resume, Brock would be the perfect choice to pull the UFC PPV numbers up while McGregor is in hiatus. But at the expense of UFC 226?

Lesnar also shoved Daniel Cormier, who had just become the fourth fighter in UFC history to win titles in two different weight divisions. Cormier is also only the second fighter to hold two world title simultaneously. But instead of getting his moment after that historic win, his post fight octagon interview turned to a WWE circus.

All About PPV Numbers

Well it didn’t help that Cormier called out Brock Lesnar himself. But it looked more like he was instructed to do so rather than he wanted Lesnar to interrupt his moment of glory. Like his bitter rival Jon Jones, Lesnar’s UFC legacy is tainted with PED use. But while DC despises Bones so much, he is truly madly deeply in love with fighting Brock Lesnar for obvious reasons.

Cormier is already 39 years old and has said before that he will retire in March of next year. But before he hangs up his four once gloves, Cormier believes that he can still squeeze out two more bouts from his battle weary body. A fight with Jones and Lesnar would be the perfect way to close his career, or so he said. But now he wants Brock and he may be getting that fight probably in November.

DC is at a point in his career where he wants the big money fights. He talked his UFC 192 title bout against Alexander Gustafsson which bombed out and generated just 250K in PPV buys. Now, Cormier says he doesn’t want to fight #2 heavyweight contender Curtis Blaydes because it’s a dangerous fight to take. He’d rather wait for Brock Lesnar to be reinstated and fight the Beast Incarnate for a fat retirement fee.

For sure, Lesnar vs Cormier would be a hit. No doubt about that. But it erases the sport side of MMA. Lesnar is coming off a drug suspension and isn’t even ranked by the UFC. There are contenders like Blaydes, Alexander Volkov or Derrick Lewis who bust their asses trying to improve their rankings. Then there is Miocic, who obviously deserves a rematch against Cormier.

But money is more important to the UFC. After all, without it, the promotion would not run. Fighters won’t be paid. And given the $3B the new owners forked out to purchase the UFC, Dana White and company need to start producing PPV hits. And that’s what exactly they did by allowing Brock Lesnar to steal the show at the end of UFC 226.