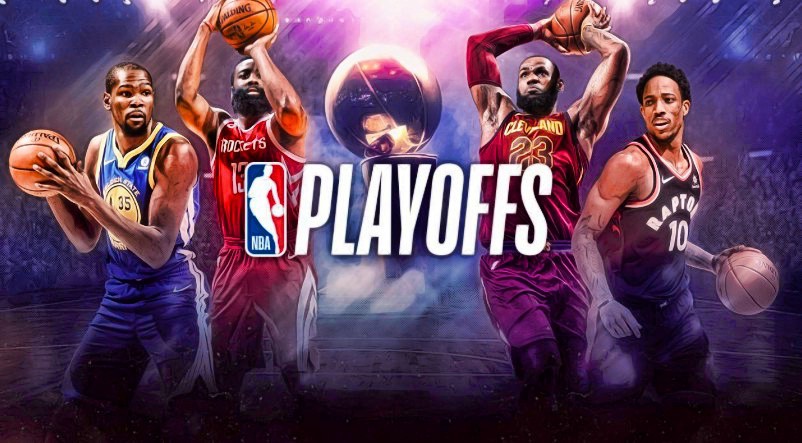 The 2018 NBA Playoffs has officially begun. Half of the pairings took the court today to play Game 1 of their respective Round 1 series.

The defending champions opened this year’s playoffs by hosting the 7th seeded Spurs who are making a remarkable 21st playoff appearance. The Warriors struggled to finish the season without two time MVP Stephen Curry. Meanwhile, Coach Steve Kerr downplayed any problems saying their season begins only today. Was Kerr correct?

In the second game, the East’s #1 team the Toronto Raptors began their 2018 postseason campaign against the Washington Wizards who were free falling from the team standings. Toronto had never won a Game 1 of a first round series before and the Wizards have just gotten All-Star guard John Wall back. Washington looked to pull off a major upset up North. But did they?

The upstart Philadelphia 76ers headlined the third game of the day, with their first Game 1 at home since Allen Iverson was MVP in 2001. There have been plenty of questions surrounding the Sixers’ success. One is their lack of playoff experience and the other being Joel Embiid’s orbital bone injury. The Miami Heat are a team with plenty of experience and a tough crew to handle. They also have three time NBA champion Dwyane Wade back. Would experience prevail over youth?

In the nightcap, the West’s 6th seeded New Orleans Pelicans visited the 3rd ranked Portland Trail Blazers. The Pelicans have played well despite losing All-Star center DeMarcus Cousins to an achilles injury. Meanwhile, the Blazers are having one of their best seasons in years behind the MVP type season from Damian Lillard. With the Pelicans led by another MVP candidate in Anthony Davis, which team was victorious?

Sit back and relax. We have all the answers right here. 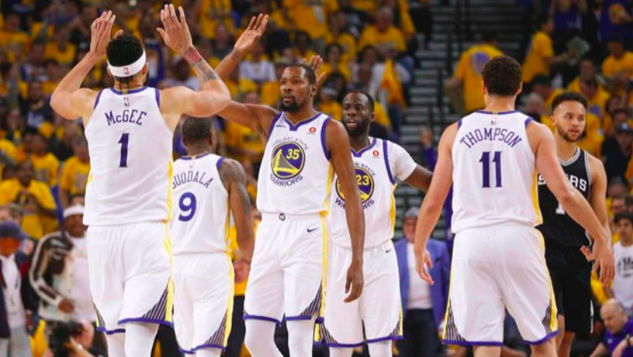 The Warriors had never looked more vulnerable than they did heading to the playoffs. Stephen Curry is likely out of the first round of the playoffs and the Warriors lost seven of their last ten regular season games. Worse, they were playing not to lose instead of winning. The defense that complimented their offensive firepower wasn’t there this season.

But Steve Kerr promised that the real season would begin today. He was right. The doubters were wrong - for now.

Kevin Durant set the tone early for the Warriors and he finished with 24 points, 8 rebounds, 7 assists and 2 steals. The Spurs had no answer for him all game long and with Klay Thompson pumping in 27 points, the rout was on the way. Shaun Livingston, who averaged just 5.5 points in 71 regular season games, shot 4-6 and scored 11 points with 5 rebounds. Andre Iguodala made a surprise start at point guard. He took only four shots and had three points. But he added 7 boards and 4 assists in 23 minutes of action.

Overall the Warriors played so good, we almost forgot that Stephen Curry wasn’t playing. During the postgame interviews, Spurs Head coach Gregg Popovich said the only way to stop Kevin Durant is for Danny Green to grow four to five inches and if they beg KD not to be that good. Well, that’s just short of saying it’s impossible. San Antonio needs to treat Game 2 like an elimination game because if the Warriors go up 2-0, it’s going to be almost impossible to stop them.

Finally, A Game One 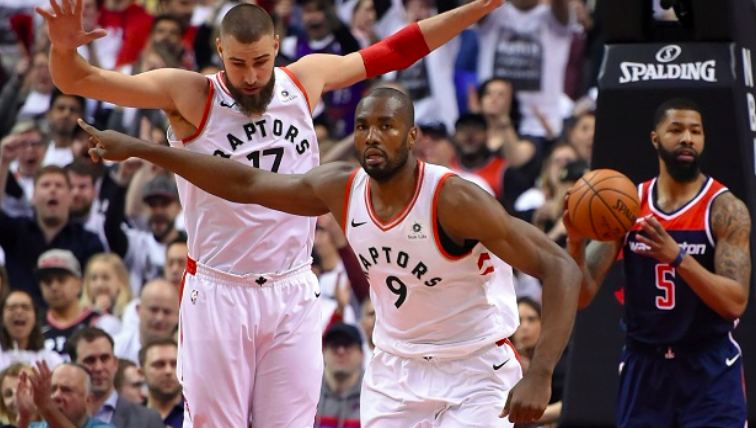 The Toronto Raptors had not won a Round 1 series opener in 17 years. The only Game 1 victory they’ve had in their history was in the second round of the 2001 playoffs. But the 10 game jinx finally came to an end on Saturday.

Serge Ibaka had a double double with 23 points and 12 boards while Delon Wright added 18 points, including 11 in the payoff period where the Raptors withstood the Wizards’ spirited charge to prevail 114-106. Washington was up 91-88 before Toronto reeled off 7 straight points after a flagrant foul on Mike Scott. Washington fought back with five straight points to take the lead again but the Raptors closed the show behind Wright and C.J. Miles.

Miles added 12 points while DeMar DeRozan scored 17 and Kyle Lowry had 11 points and 9 assists. Toronto made a franchise playoff record with 16 three pointers made. Miles had four three pointers while Ibaka and Wright had three apiece.

John Wall has a monster night with 23 points and 15 assists for the Wizards but his team came up short in the final period. Markieff Morris added 22 points and 12 boards for Washington while Wall’s backcourt mate Bradley Beal scored 19 points. Despite the loss, the Wizards proved that they are deadly as an 8th seed and if they can play good for 48 minutes, they can be a handful for the Raptors.

Passing The Test With Flying Colors 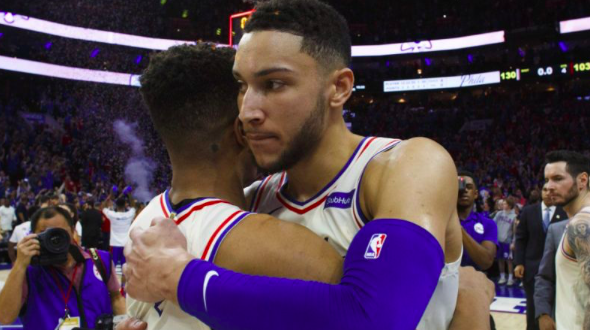 The Philadelphia 76ers opened their playoff campaign with more questions than answers. How was this team going to do without Joel Embiid who is out with an injury? How will they handle Miami’s playoff experience being newcomers in the postseason? Well those questions were answered and the Sixers passed their test with flying colors.

Ben Simmons was one rebound shy of a triple double in his playoff debut. The Sixers’ super rookie scored 17 points, grabbed 9 rebounds and issued 9 assists to lead his young team to a 130-103 blowout of the Miami Heat.

Philadelphia’s gunners were right on target, making 18 of 28 three pointers. With the win, the Sixers extended their winning streak to 17 and 10 in a row without Embiid. J.J. Redick led the Sixers with 27 points while super subs Marco Belinelli and Ersan Ilyasova, acquired via the buyout market, added 25 and 17 respectively for the Sixers.

Miami took a double digit lead early and led the Sixers 60-56 at the end of the first half. Behind Kelly Olynyk and James Johnson, coach Erik Spoelstra’s team looked like they were ready to push the Sixers to their limits. But the Sixers had other plans.

With the crowd behind them and Embiid cheering loudly from the bench, the Sixers outscored the Heat 34-18 in the third period and never looked back. It will be interesting to see how the Heat will respond to this red hot Sixers team in Game 2.

How can we say that there were no surprises tonight when the Pelicans beat the Blazers 97-95 in Portland?

The Portland Trail Blazers easily have the better backcourt than the New Orleans Pelicans. After all, they have the second highest scoring backcourt duo in the league. But New Orleans has the best player in this series in Anthony Davis and the Brow showed his supremacy tonight.

Davis had 35 points, 14 rebounds and 4 blocks as the New Orleans Pelicans held off the Portland Trail Blazers in Portland to steal home court advantage from the Blazers. The Pelican’s underrated backcourt beat the Blazers’ high scoring duo as Rajon Rondo had 6 points, 7 boards and 17 assists while Jrue Holiday added 21 points.

Aside from his scoring, Holiday stopped the Blazers’ final two possessions by forcing Damian Lillard to a tough runner and blocking Pat Connaughton’s layup. Although Damian Lillard and C.J. McCollum rallied the Blazers in the final period, the Pelicans’ defense limited them to a combined 13-41 from the field and an aggregate of 37 points.

New Orleans is one of the teams considered to be the dark horse in these playoffs because they have a Top 5 player in Anthony Davis and have veterans like Rajon Rondo and Jrue Holiday in their backcourt. They proved their worth in Game 1 as Davis won his first playoff game. Can they upset the Blazers in Round 1? For sure. But don’t count Lillard out. He and McCollum have not had too many off nights this season.