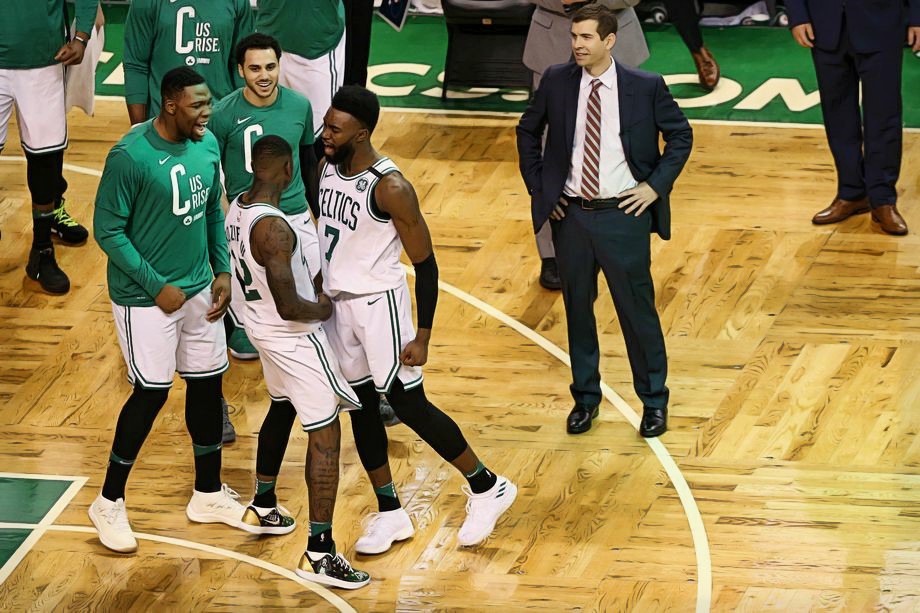 The Boston Celtics continue to defy the odds.

Given up for dead after Gordon Hayward was lost to a season ending injury on opening night, Boston won 16 straight games and took the early lead in the Eastern Conference. They lost Kyrie Irving to a season ending injury late in the season, they managed to hold on to the East’s 2nd seed. Now faced against the Milwaukee Bucks and probably the next big thing in the NBA in the Greek Freak Giannis Antetokounmpo, the depleted Celtics have managed to hold their own. Nothing spectacular. They just keep on getting the job done.

In Game 1, the Bucks took the fight to the Celtics, but Brad Stevens’ team refused to fold. Even when Khris Middleton nullified a spectacular potential game winner from Terry Rozier with 0.5 seconds left in the game, the Celtics fought hard to win the game in overtime.

With Rookie star Jayson Tatum struggling with just 4 points in Game 2, the Celtics found other ways to score and won the game 120-106. Now they’re up 2-0 on the Bucks and Milwaukee looks shell shocked with the way this starless but solid crew has played so far.

21 year old sophomore Jaylen Brown led the Celtics with 30 points on 12-22 shooting, including 5-12 from behind the three point arc. Backcourt partner Terry Rozier, starting in just his second postseason game, added 23 as the Celtics’ starting backcourt outscored their Bucks counterpart 53-14 ( they also outscored Bledsoe/Snell 43-11 in Game 1 ). 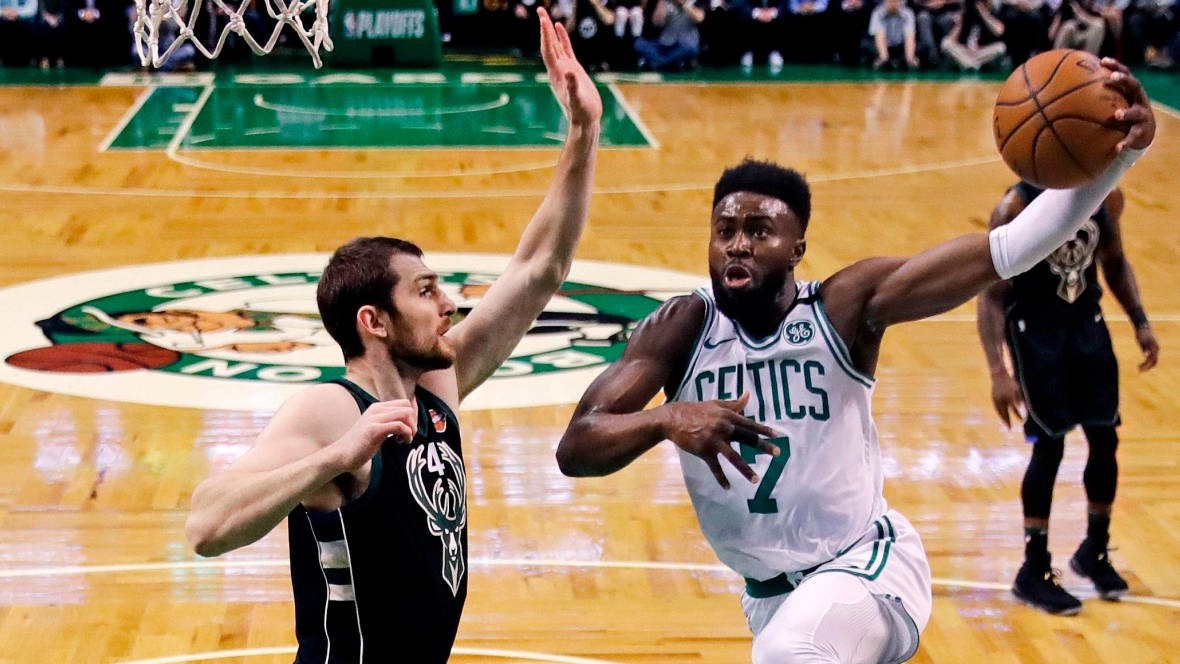 To say that it was a career night for Jaylen Brown would be an understatement. Sure, he missed topping his career scoring high of 32 points but 30 represents Brown’s first and highest playoff scoring game ever.

Brown didn’t just set a career playoff high for himself, he also set a new franchise playoff record as the youngest player in Celtics’ history to score at least 30 points in a playoff game. At 21 years and 175 days, Brown surpassed Tommy Heinsohn’s record which stood for 61 years. Heinsohn was 22 years and 209 days when he scored 30 points against the Syracuse Nationals on March 23, 1957.

Likewise, only three active players have scored 30 or more points in a playoff game at an age younger than Jaylen Brown. These players are LeBron James, Derrick Rose and Brandon Jennings. Brown also set a playoff career mark with 12 field goals made and 5 three pointers connected. 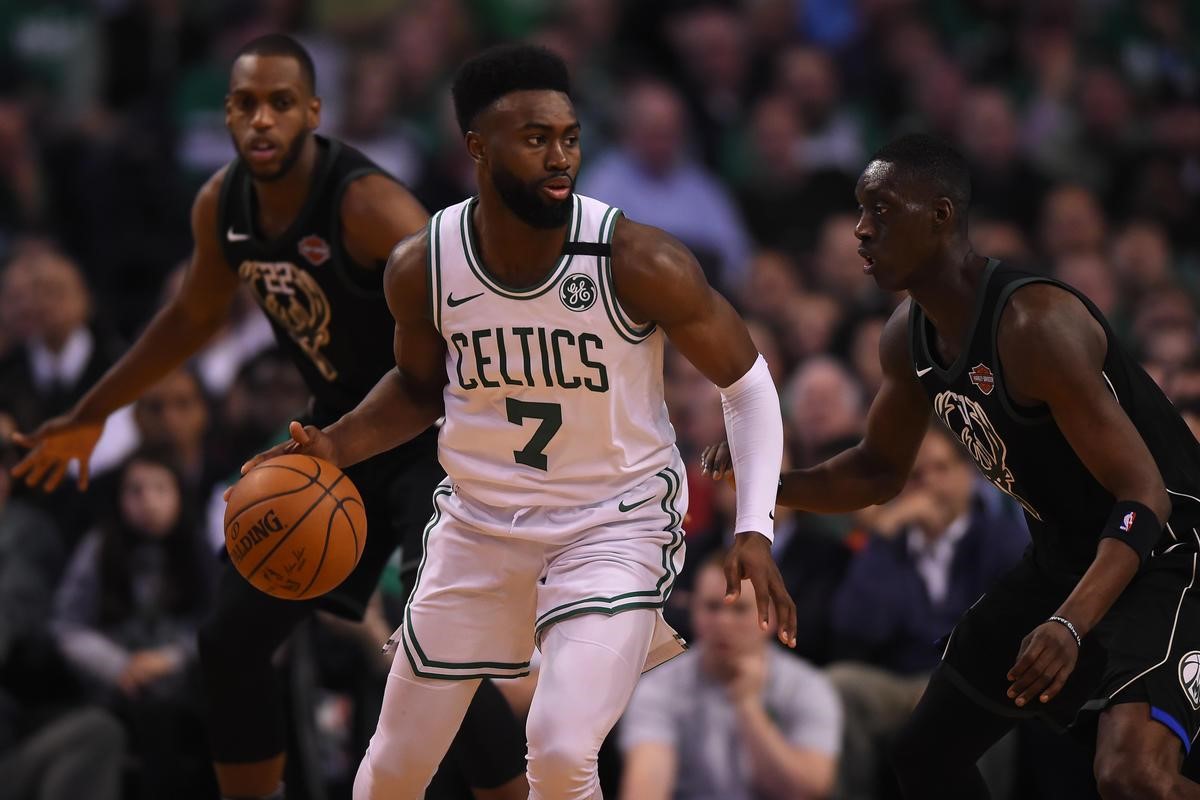 But before Brown came to his own this season, he wasn’t expected to play the kind of role he has played. He was a 20 year old who was being slowly thrown in the fire last season. The 3rd pick of the 2016 NBA Draft, Brown averaged just 6.6 points and 2.2 rebounds in a modest 17.2 minutes per game appearance last season. He did however showed flashes of brilliance in the playoffs, but not the kind of stuff we are seeing from his this season.

The injury to Gordon Hayward thrust him into this situation. As a result, his minutes nearly doubled this season ( from 17.2 to 30.7 MPG ) and his scoring average more than doubled ( from 6.6 to 14.5 PPG ). More importantly, he has gained the confidence of a seasoned veteran, one that is ready to take the big shots when needed.

“I think Jaylen loves the moment," said Celtics coach Brad Stevens. "I think he really appreciated the opportunity to compete on this stage and at this level. And we've seen him against the better teams in the league all year be able to really raise his level in some of the biggest games."

A lot of players can play great all year long. Only a few can raise their level in the playoffs. That’s the stuff that the legends are made of. 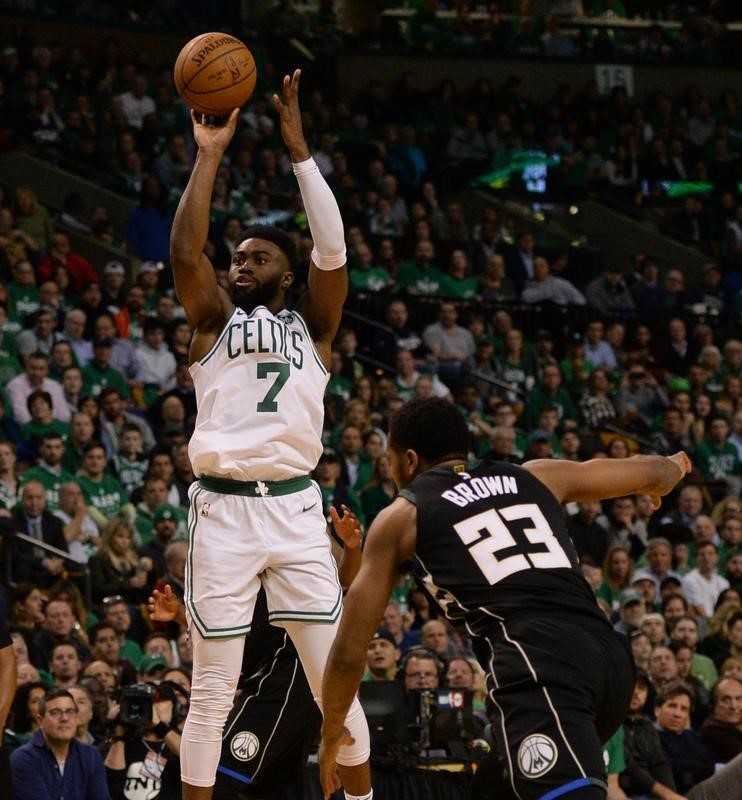 Brown’s Game 2 effort not only helped the Celtics hold court and give his team a lead 2-0 in their Best of Seven series against the Sixers, it felt like it has broken the Bucks’ spirit somehow. The Bucks tried to threaten several times in the game but each time they did, the Celtics had all he answers.

Jaylen Brown scored 12 points in the first quarter as Boston opened an 11 point lead at the end of one quarter. The Bucks cut the lead to single digits in the second period and got as close as 62-68 in the third period. But Brown pumped in 10 more points in the third frame as Boston created the separation it needed to put the Bucks away for good.

In two playoff games this year, Brown is averaging 25 points, 4.5 rebounds and 2.5 assists per game. He’s shooting the ball at at .510 ( 21-41 ) from the field and .410 ( 7-17 ) from behind the three point line in 39.5 minutes of action per game. That’s impressive, considering he is just 21 and is playing in just his second postseason. That’s also scary, considering he may only be just beginning to scratch the surface. 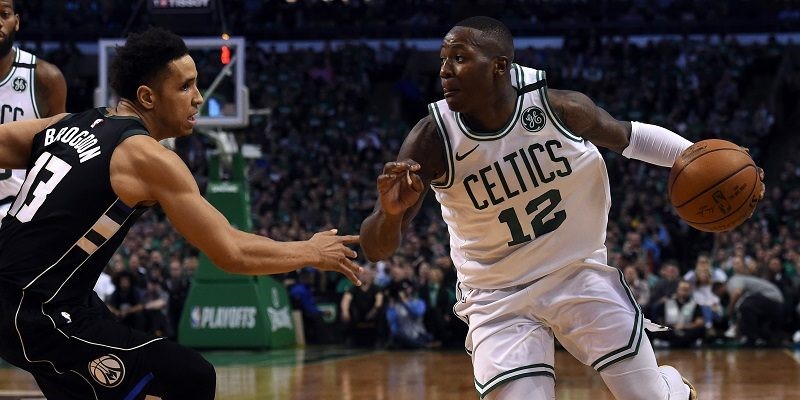 If Brown is scary good, the Celtics are scarier deep because it’s not just Jaylen Brown who’s playing at a different level in the first two games of the playoffs.

Terry Rozier hasn’t been just been filling up Kyrie Irving’s shoes, he’s wearing them as if it were his own . Rozier has averaged 23 points, 3.5 rebounds, 5.5 assists and 1 steal per game this series. More impressively, Rozier has not committed a single turnover in a total of 78 minutes of playing time.

In Game 1, Rozier drilled a clutch three pointer with 0.5 seconds left but the potential game winner was erased after Khris Middleton sent the game to overtime with a miracle shot. But in the extra period, Rozier calmly sank four free throws in the final 18.8 seconds to preserve Boston’s Game 1 win.

But Rozier isn’t just doing it in the playoffs. In the 16 games he’s started this season, Rozier has increased his regular season averages by 5.4 points, 2.1 rebounds and 2.8 assists per game. After Game 1, Rozier talked about being thrown in the spotlight:

"I just know I gotta step up," he said. "I know I gotta fill big shoes. I don't feel no pressure. I'm glad to be in this position."

The Celtics are certainly glad they drafted him in 2015. 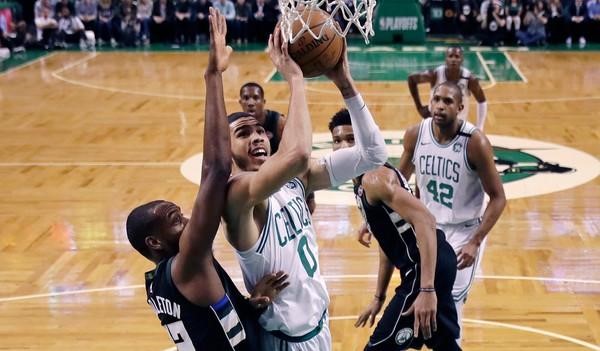 With Rozier and Brown combining for 53 points in Game 2, nobody even noticed that rookie sensation Jayson Tatum had an off-night. The 3rd pick of the 2017 NBA Draft missed his first six shots and finished with 4 points on 2-9 shooting. One game ago, Tatum became the first rookie in the Celtics’ storied history to record a double double in both his regular season and playoff debut. The former Duke standout had 19 points, 10 rebounds, 4 assists and three steals in Game 1.

Considering that Boston played without Hayward, Kyrie Irving and Marcus Smart in the first two games of the playoffs, they have shown tremendous depth. Imagine three bench players are already in the starting line-up because of injuries, yet the Celtics’ remaining bench still managed to contribute 41 points in Game 2. That’s impressive considering the Bucks’ second unit only managed to come up with 25 total points.

With the way Boston has been playing despite the absence of its stars, you’ve got to wonder whether this team is really incredibly deep or is head coach Brad Stevens pulling the right strings. Stevens is known as a coaching prodigy who is known to make the most out of whatever he has. And given this injury plagued situation, he’s surely done the best job anybody could, especially with trusting his young guys off the bench.

Remember that the Celtics returned just four players from their 2016-17 roster. They virtually overhauled their line-up to get both Kyrie Irving and Gordon Hayward. Yet they’ve ended up playing the postseason without both. In two games so far, that has not mattered. The stakes change though as the rounds progress and while nobody is expecting the Celtics to win the title, it’s fair enough not to count them out too.