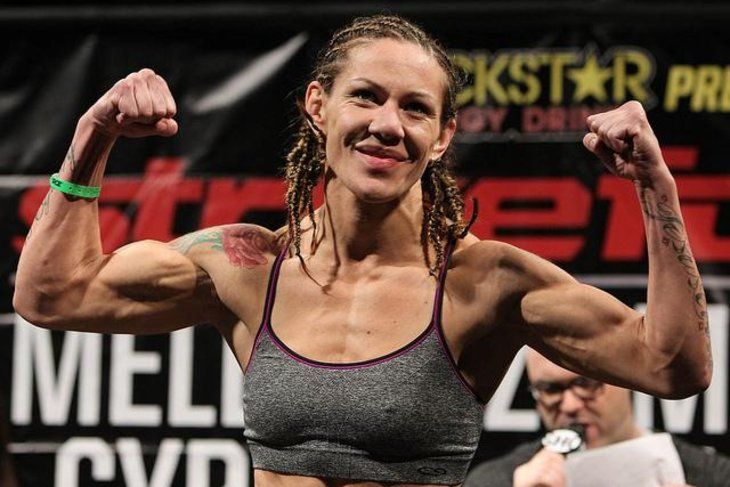 Is Cris Cyborg The Next MMA Star To Transition To Boxing?

Recent footage of Cris Cyborg sparring with two time Olympic gold medalist boxer Claressa Shields is all over the internet.

The almost two minute video, uploaded by social media accounts linked to both fighters, was just part of Cyborg’s preparations for her upcoming UFC 214 women’s featherweight title bout against Tonya Evinger. But because of the buzz created by the fight between Floyd Mayweather Jr. and Conor McGregor, many are wondering if Cyborg is going to follow in the footsteps of the Notorious One.

The Most Dominant Featherweight

A former Strikeforce Women’s Featherweight champion and the former Invicta FC Featherweight title holder, Cyborg is one of the most dominant female mixed martial artists of all-time. She has not lost since getting submitted in her first MMA bout and has won 17 fights in a row, including 15 knockouts. She rose to fame when she knocked out women’s MMA pioneer Gina Carano to win the inaugural Strikeforce Women’s Featherweight title in 2009. Carano retired after the brutal loss. Cyborg became the sport’s most feared fighter.

Cyborg, born Cristiane Justino, was often linked to a super fight with Ronda Rousey back during the latter’s glorious years. But the fight never happened. Eventually, Cyborg found her way to the UFC where she first fought at catchweight bouts. But with the recent addition of a women’s featherweight division, Cris Cyborg may have found her ‘home’ and her UFC 214 bout is one step to winning yet another world title in the world’s premier MMA promotion.

Looking for A Fight

At the time she was chasing Ronda Rousey, there was no brave soul who would fight Cris Cyborg inside the MMA cage. In frustration, Justino inquired about a boxing bout with the queen of female boxing, Cecilia Braekhus in 2016. Braekhus took Cyborg’s query seriously and challenged her to a boxing match. The talks of that bout died down when the UFC finally created a women’s featherweight division. But will Cyborg really be content with beating up the lesser known UFC female featherweights?

Cris Cyborg is one woman not afraid of any challenge. In 2014, Cyborg challenged undefeated Muay Thai champion Jorina Baars at the inaugural Lion Muay Thai women’s world featherweight title at Lion fight 14. She lost that fight via unanimous decision but earned much respect for being able to stand her ground against one of Muay Thai’s best fighters. Prior to that Muay Thai title bout, Cyborg also competed in submission grappling. She was a bronze medalist in the 2009 ADCC submission wrestling world championships and a two time gold medalist in the IBJJF World Jiu Jitsu Championships ( female purple belt ). Is Cris Cyborg interested in boxing?

Cris Cyborg has many times hinted that she wants to fight in a boxing ring someday. She reiterated that desire after her sparring session with Claressa Shields.

Shields may have gotten the better of Cris Cyborg during their sparring session, but the former U.S. Olympic star was all praises for her sparring mate:

"She’s physically strong, physically fast, very athletic…...Cris is strong, she’s fast. I looked at (Cyborg’s films) and I was like 'ok, I see a few things that I wanna tell her to work on,' and then, the best way to learn is from experience,” Shields said. "From today, she’d be a great transition in over to boxing. It would be not be hard for you. A year of just training in boxing, six months, you’ll able to take on some of the top girls.”

For now, Cyborg is focused on UFC 214 and winning MMA’s biggest prize- a UFC title belt. Barring any major upset, she’s going to wrap that strap around her waist. But what comes next after she wins the UFC featherweight belt? There is of course Holly Holm, the former UFC women’s bantamweight champion who ended Ronda Rousey’s dominant reign. After he though, there aren’t big names in the division. With Rousey’s imminent retirement, there isn’t a big name at all in women’s MMA. So will Cris Cyborg turn to boxing to get the big fight she always wanted?

"It’d be a heck of a match-up between her and Cris.That would be a really good fight. Wouldn't be like Cecilia Braekhus would just have in the bag. And long as Cris is in shape, gets the boxing down and be focused on it, it would be very, very competitive.” 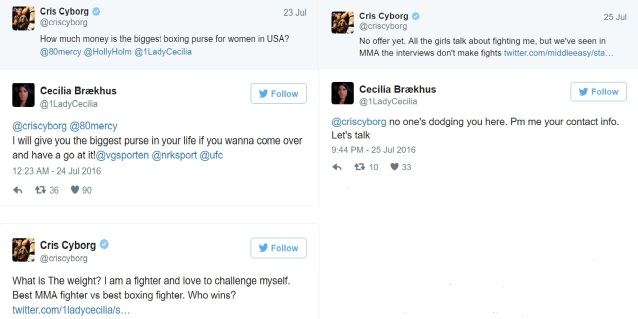 For now, let’s leave the super fight to Mayweather vs McGregor. And let Cris Cyborg hoist that UFC featherweight belt first at UFC 214. But the two minute video won’t be the last time you’ll see Cris Cyborg put on boxing gloves. Boxing is that one thing that’s always been in her bucket list.

"I already did competition in just jiu-jitsu, already did competition just muay thai, I did just wrestling, and one thing that I never did was one boxing fight…..If I go to the (Shield's) gym, where she’s training just boxing, I think I’m gonna learn a lot of things, a lot of experiences, and to improve my game and better better, for me it would be amazing. I told her, after my fight I’m gonna be with her and train every day and follow her, and learn.”

In October 2016, Cecilia Braekhus told media that she wants to do two things in 2017: fight in the United States and fight Cris Cyborg. Regardless of what some people say, let’s hope the crossover fight between Mayweather and McGregor won’t be the last of its kind. Putting aside all the hype and money, it’s going to be a very interesting fight.