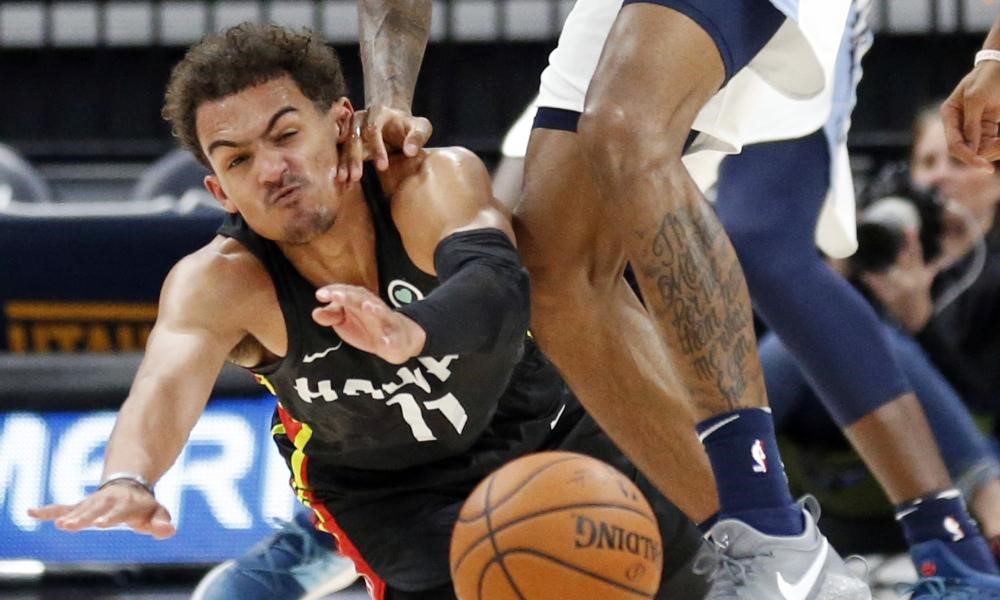 Is Trae Young’s Early Struggles A Cause Of Concern?

First impressions last. That’s why Trae Young’s Summer League debut will always be talked about. Young entered the 2018 NBA Draft with Steph Curry comparisons and we saw countless highlights of him draining very looooong three pointers. His range was unlimited. Or so it seemed.

Expectations are high in Atlanta especially since the Hawks traded Luka Doncic, a player considered by scouts and experts to be the most NBA-ready player in the 2018 draft class. Sure, the Hawks got an additional first round pick (conditional 2019 first rounder) during the deal. But the trade was about Trae Young and Luka Doncic.

Sure, Young proved that he can create his own shots. He took 20 shots in his debut and 16 in his second Summer League game. But there’s a big difference between being able to get your shot up and making baskets. The former is cute but it’s the latter that really matters.

Through two games, he’s made only 9 total shots and is shooting the ball at a 25% (9/36) clip. His three point shooting? He was 1-11 in his debut and 1-5 during his second game. 2-16 in two games? That’s entering Lonzo Ball territory already. But while three point shooting wasn’t Lonzo’s specialty, it was supposed to be Trae Young’s calling card in the NBA. It still is and the Hawks hope that his three ball is going to start falling soon. Or else the Dallas Mavericks could have the last laugh.

Light At The End Of The Tunnel 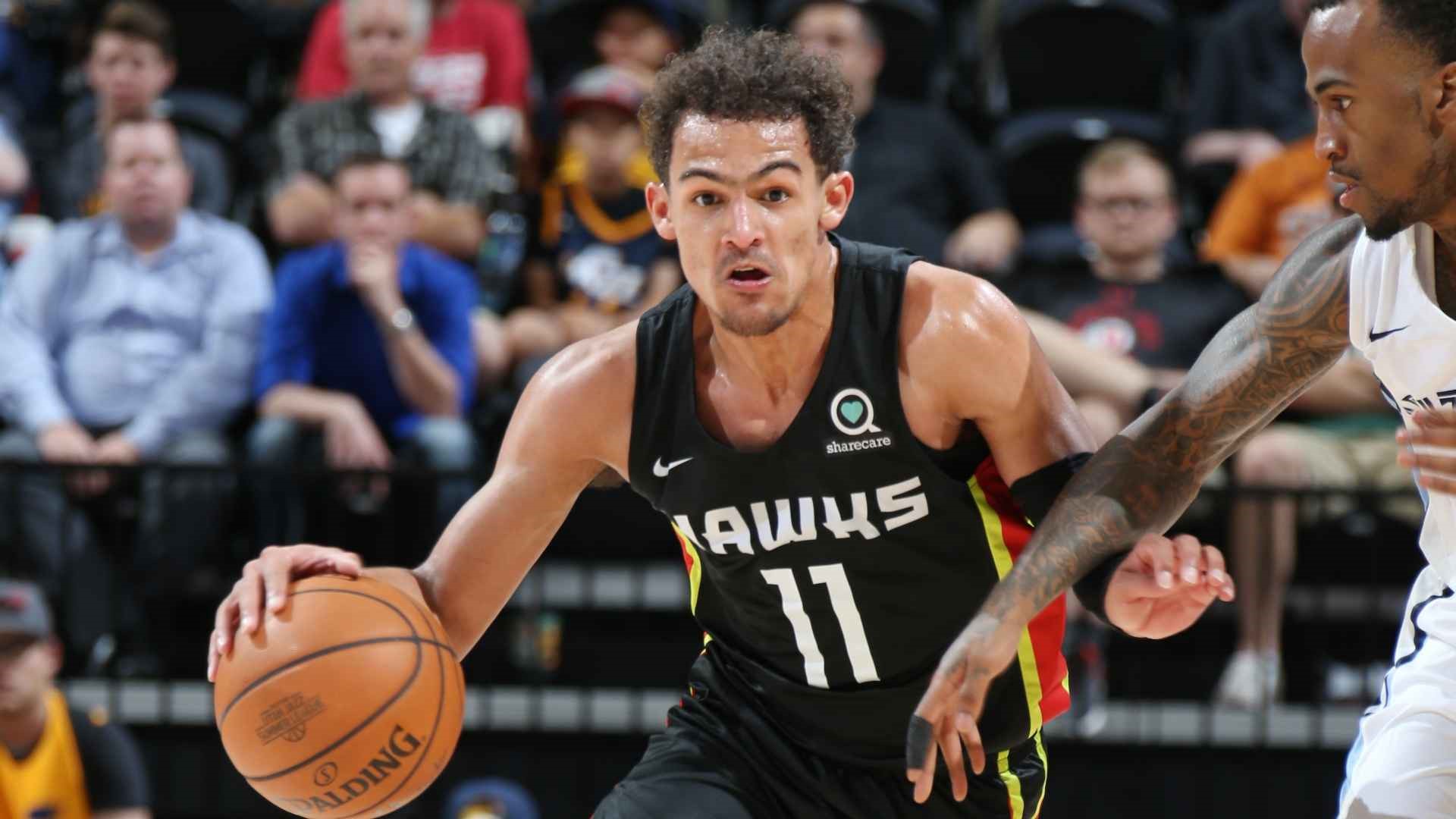 After the Atlanta Hawks only got one trip to the Eastern Conference Finals in 10 playoff appearances, the franchise hit the reset button last season. Tired of losing in the first or second round of the playoffs over and over again, the Hawks traded their veteran players and experimented with young and unproven talents. At the end of the 2017-18 season, the Hawks finished at 24-58, the worst record in the Eastern Conference and the third worst overall in the league.

Thanks to their worst season since 1999-2000, the Hawks got the fourth best chance in the draft lottery to draft first overall in the 2018 NBA Draft. They also had a 42.3% chance to land a Top 3 pick. Given that the class of 2018 was considered one of the deepest in recent memory, the Atlanta Hawks surely looked at the draft as the light at the end of the tunnel.

Sure, the Hawks didn’t get the #1 overall pick. That went to Phoenix. But they still won the draft lottery by bagging the 3rd overall pick. Given that they finished with the 3rd worst record in the NBA last season, getting the #3 overall pick was just fine. In fact, that was the Hawks highest draft pick since they picked 3rd overall in 2007. That pick produced Al Horford, one of the main catalysts during the Hawks’ best season ever in 2015 when they won 60 games for the first time in franchise history.

But after DeMarre Carroll left for Toronto the following season, Horford and Kyle Korver followed suit two seasons later. Korver took his three point shooting skills to Cleveland where he won an NBA title with the Cavs in 2016. Horford meanwhile, signed with the Boston Celtics and is currently the leader of a young and promising contender. The Hawks? They were forced to start from scratch and the 2018 NBA Draft would be their main hope. 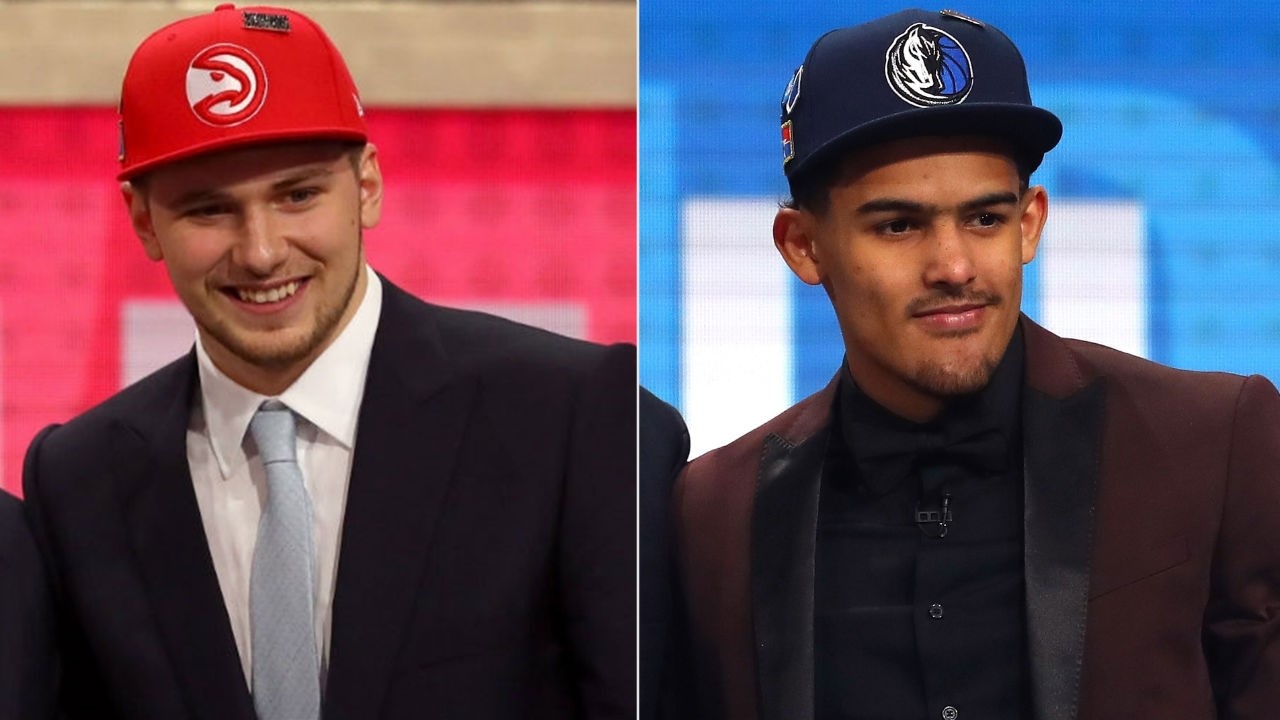 Not only did the Hawks own the 3rd overall pick, they also owned the 19, 30th and 33rd picks, meaning they really had one of the best chances to get rich in the talent laden 2018 draft class. The Phoenix Suns were a lock to pick DeAndre Ayton with the top pick and when it was clear that the Sacramento Kings had their sights set on Marvin Bagley III of Duke, the coast was clear for the Hawks to pick Luka Doncic.

Doncic had been on top of the mock drafts for many months leading to the actual draft day itself. As a teenager, his exploits in Europe were unheard of. His achievement were impressive and he is considered as the best draft prospect ever from Europe, the likes of Dirk Nowitzki and Kristaps Porzingis notwithstanding.

But as draft day grew nearer and nearer, Doncic’s stock started to plummet. More and more, it was Ayton whose name began to appear on top of mock drafts. Ayton’s affinity with the Phoenix area made him more appealing. The Sacramento Kings meanwhile, weren’t keen on taking a point guard. They already drafted D’Aaron Fox with the 5th pick of the 2017 NBA Draft.

The Hawks have a very good point guard in Dennis Schroeder but with this current reboot, he may have become expendable too. Likewise, Schroeder hinted about leaving the Hawks to and doing what’s best for him. Schroeder still has two years left in his existing Hawks contract. But with the developments around, he may not be part of their long term plans.

So picking Luka Doncic was ideal for the Hawks. Doncic is only 19 and already has tons of experience playing professional basketball. He may not have the NCAA experience of Ayton or Bagley but he has played in the highest level of European basketball and has achieved the highest awards in those leagues. And yes, Luka Doncic plays point guard although he can also play the two guard position.

When Adam Silver called out Doncic’s name as the third overall pick of the 2018 NBA Draft, it was supposed to be victory for the Hawks and their fans. But even before they could start to celebrate, the team had traded him to the Dallas Mavericks, who owned the 5th pick, for Oklahoma guard Trae Young.

The Next Steph Curry 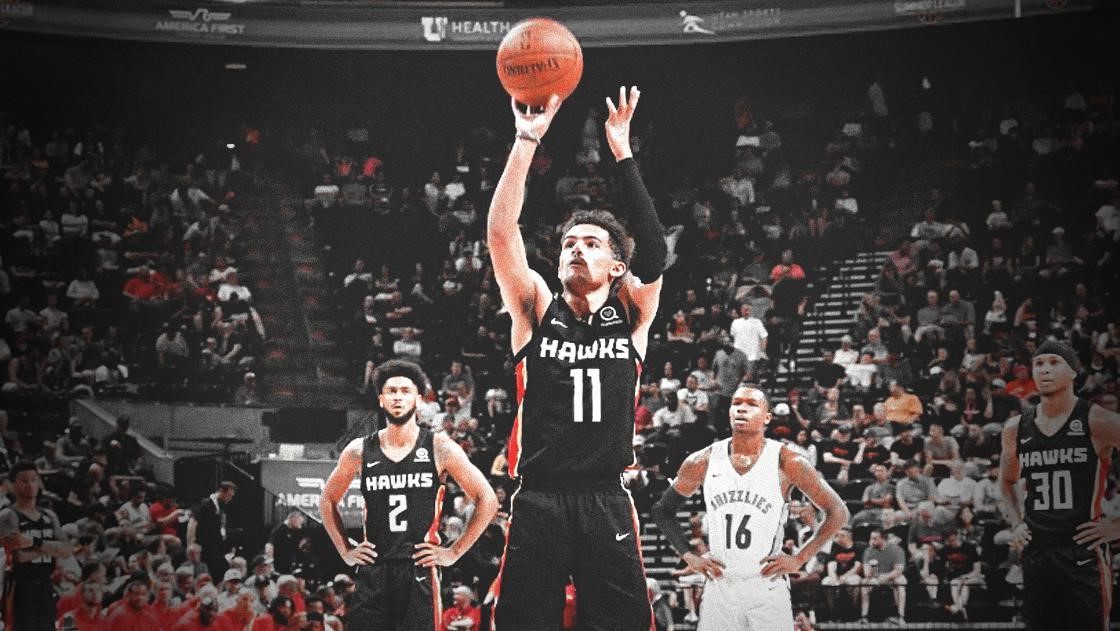 Young had captured the imagination of America as the next Steph Curry with his silky smooth shooting stroke and his uncanny ability to make plays. Young led the nation in scoring and assists, the first player to ever do so. But while Young was always a brilliant playmaker, it was his incredible shooting touch that caught the attention of scouts, experts and fans alike.

Young wasn’t just stroking the three pointer in college, he was rocking it by shooting from a distance even farther than the NBA three point range. In his one and done season with the Sooners, Young shot the three ball at a very good 36% accuracy, 5th best in the Big 12. Young’s 118 three pointers made last year was also the most in the Big 12.

Offensively, Young was a machine in his lone college season. He was the first player to lead the NCAA Division 1 in both scoring and assists. He also led the nation in Points Produced (935 points), points produced per game (29.2 points) and offensive box plus/minus (11.2). His offensive win share total of 4.6 ranked 10th in the entire country.

But the drawback on Trae Young was his size. Listed at a generous 6-2 and 180 pounds, Young lacked the height and heft to match up with the elite point guards in the NBA. Just take Russell Westbrook and John Wall as two examples. You can just imagine Trae Young guarding either all-star point guards and what a mismatch it would be.

Size was the main reason why Young was projected to be picked outside the Top 5 - #7 or #8 in many mock drafts. In a league where size and athleticism rule, Young was expected to struggle in the NBA and for some, they didn’t think he was going to make it big in the NBA. So while it was a surprise that the Hawks traded Doncic, it was a shock why they chose to do so in favor of Trae Young.

Nothing against Young but the trade didn’t make much sense, really. If the Hawks didn’t want Doncic, they could have picked Jaren Jackson Jr., Mohamed Bamba, Wendell Carter and Colin Sexton. Instead, the Hawks put their money on Trae Young and now all eyes are on them and Young. 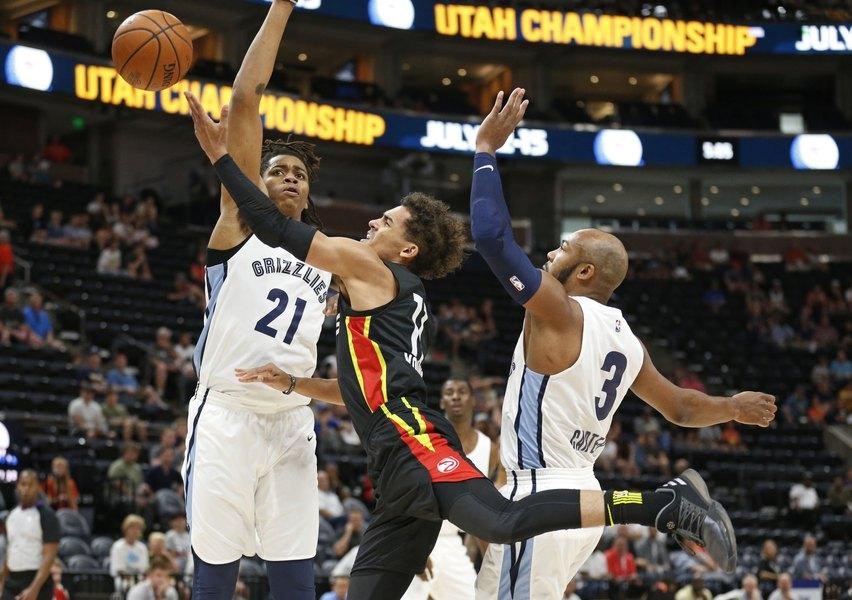 The NBA Summer League doesn’t guarantee NBA success. Not at all. In fact, while the likes of Blake Griffin, John Wall and Damian Lillard won the award, players like Tyus Jones, Glen Rice and Josh Selby were also Summer League MVPs. Last year’s Summer League MVP was the Los Angeles Lakers’ Lonzo Ball. He didn’t even make the All-Rookie first team and was upstaged by teammate Kyle Kuzma, selected 25 picks after Ball.

Going back to Trae Young. It would be unfair to judge him after just two Summer League games. But the fact that he struggled to shoot against Summer League defense is a reason to be noticed. During his debut against the Grizzlies, Young was guarded by West Virginia defensive stopper Jevon Carter and he shot 4-20 from the floor. Carter is a good college defender but at a listed height of 6-2, he is nowhere near the likes of Klay Thompson or Marcus Smart. So what happens when Young gets defended by the NBA’s best lockdown defenders?

Young has acknowledged his early shooting struggles. But after two games, he talks about making the right plays as the most important thing. No question he is a smart playmaker and he makes the right plays most of the time. But that’s not what he was supposed to be in the NBA for. The playmaking was supposed to be a bonus. If the Hawks wanted just a playmaker, then they should have just kept Doncic.

Interestingly, Jaren Jackson Jr. outplayed Trae Young in that Grizzlies vs Hawks game. Jackson scored 29 points in that game, going 9-15 from the floor including 8-13 from behind the NBA three point line. To think that three point shooting wasn’t his calling card, Jackson was impressive and his opening game success only magnified Trae Young’s struggles. But once again, that was just a Summer League game. It’s not a gauge of how good Jackson will be during the regular season. Still, first impressions last and for Trae Young, it’s going to add more pressure to him and the Hawks this coming season. It’s not a cause of concern but you can’t blame the Hawks fans if they’re worried.