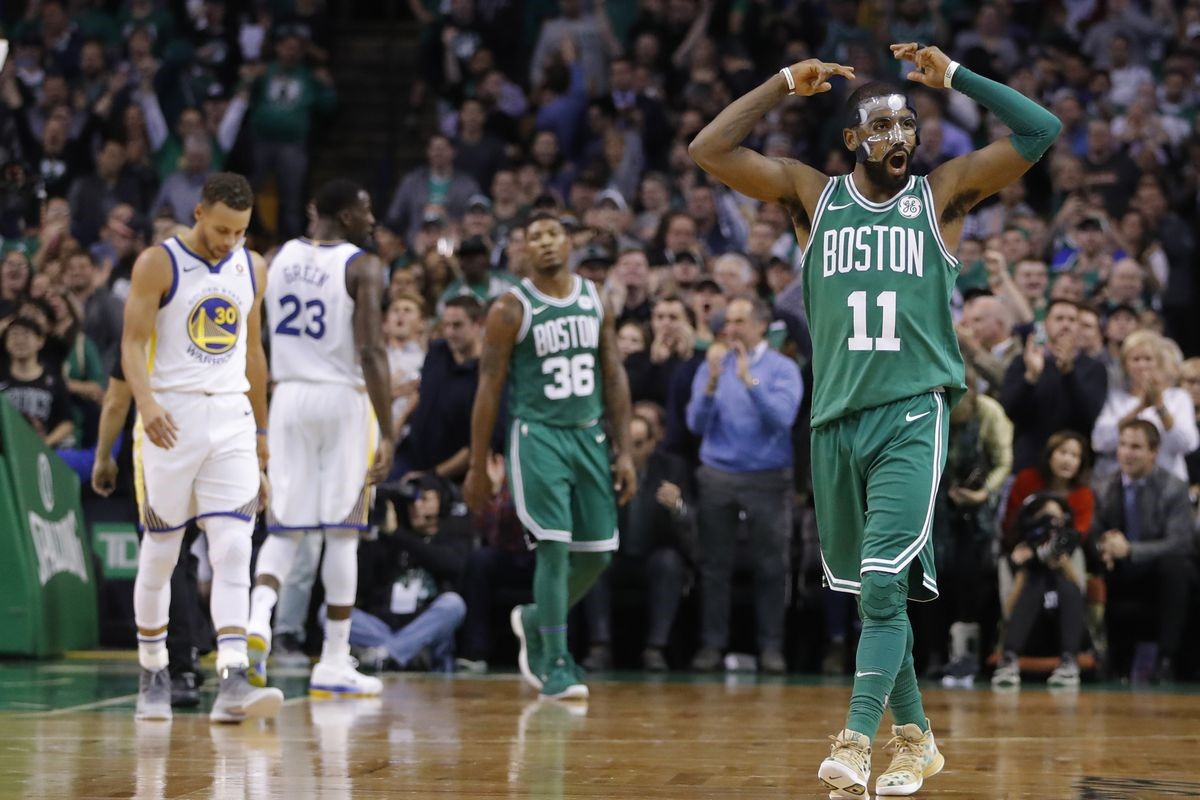 Kyrie’s Kicks Are On Fire Too

You’ve heard about the luck of the leprechaun in Boston and if you think that, in a way, helped the Celtics defeat the defending champions Golden State Warriors last week, well you are very wrong. But well, the Celtics did need some “luck” to beat the Warriors but it’s not the luck that you are thinking about right now.

If you watched the game, perhaps it was Kyrie Irving’s protective facial mask that caught your attention. Everyone noticed how Irving ditched the mask in the latter part of the game and risked his health by attacking the basket fearlessly despite still nursing a facial injury. But if you watched the game more closely, you would have noticed that Kyrie used two shoes to the game. He played one in the first half and another in the second half.

Irving literally brought ‘luck” by debuting the "Luck" colorway of his Nike Kyrie 3 signature sneaker in the first half of their game against the Warriors. The Celtics' themed shoe features a hardwood inspired tan colored upper with green clovers scattered all around the shoe. The shoe was made available last November 17, 2017 only at Washington St. in Boston ( of course ) and House of Hoops in Harlem, New York.

Check out the kick's pics below: 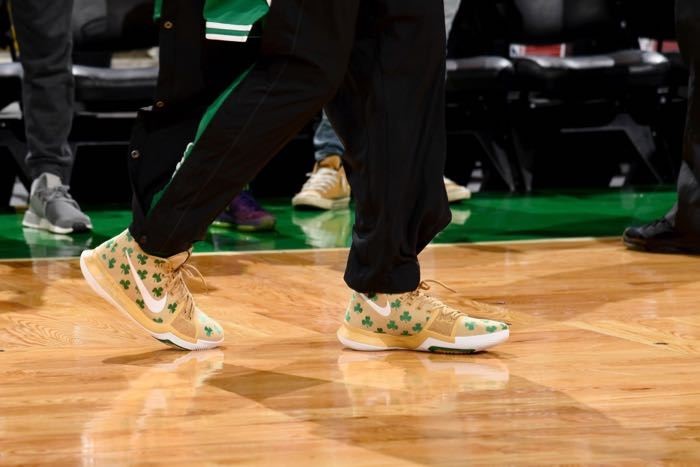 Here’s Kyrie driving to the basket in the first half of that game: 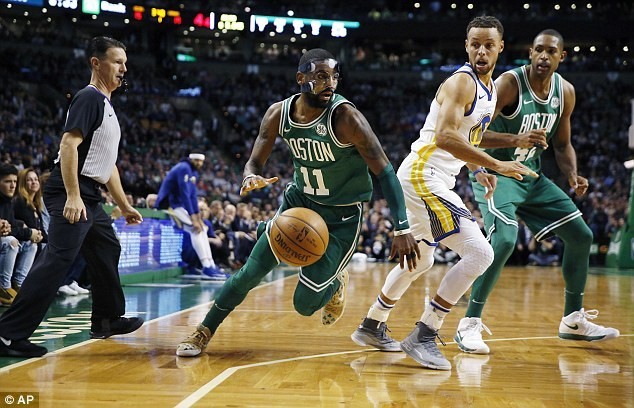 Here are more detailed images of the shoe: 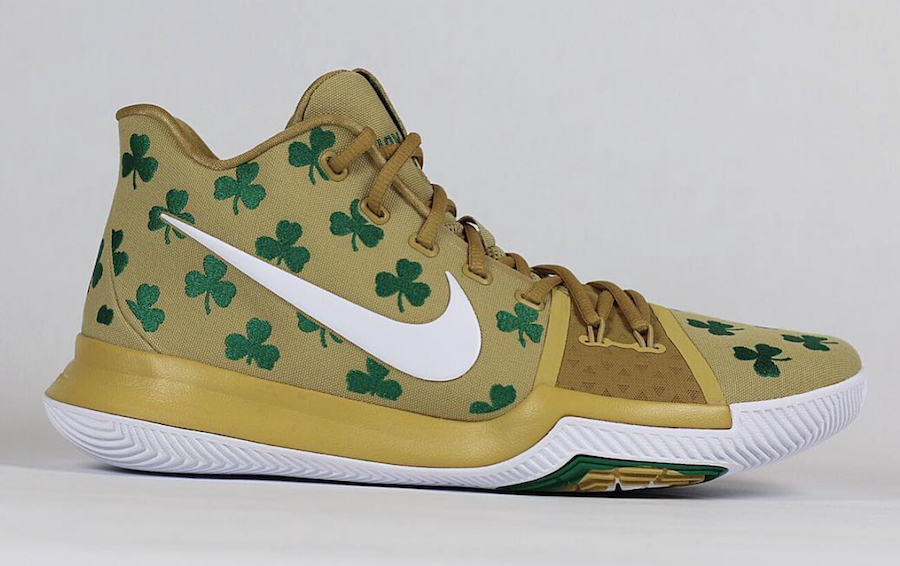 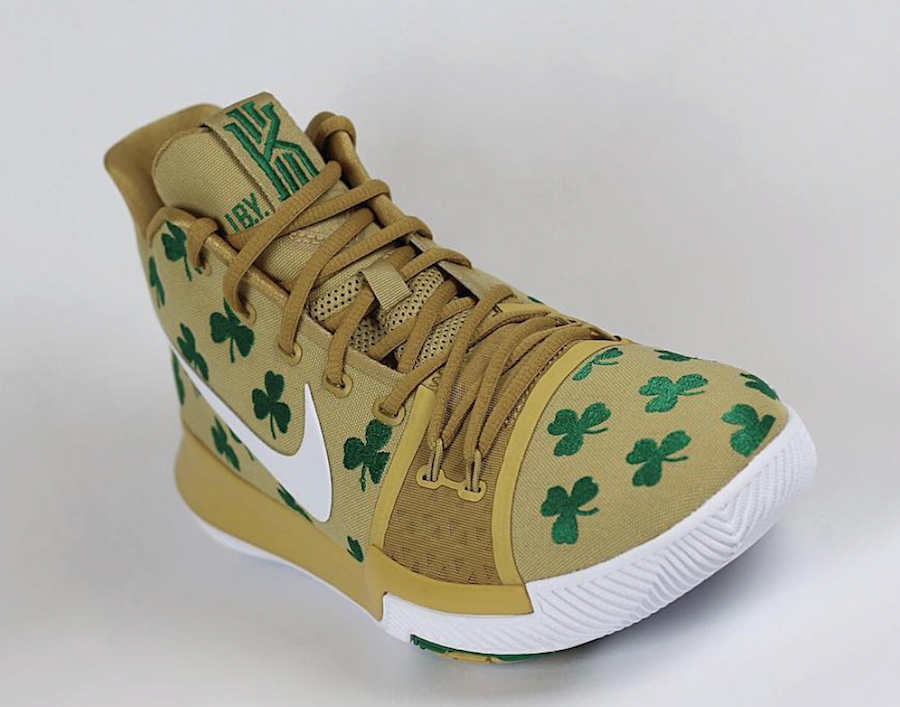 Without ‘luck’, Irving found more success. Kyrie scored 11 of his 16 points in the 4th quarter, helping Boston rally from a 17 point deficit to win 92-88. Irving wore another colorway of his shoe in the second half, this was was called “Mom”, an obvious tribute to his mother Elizabeth who died when Kyrie was just four years old.
Watch Kyrie celebrate with “Mom”: 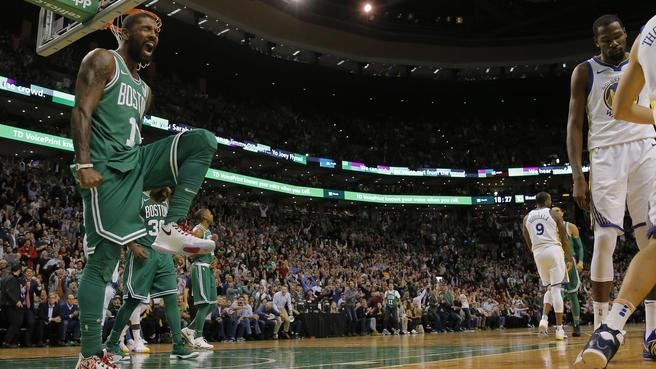 According to Sneaker Room’s Instagram post, the colorway isn’t just dedicated to Kyrie’s mom but to all mothers:

INSIDE THE ROOM SNEAK PEEK: First glimpse of our upcoming @nikebasketball project. A sneaker dedicated to all the moms out there! Stay tuned for design details & launch information. #SneakerRoom #LiveTheLifestyle

INSIDE THE ROOM SNEAK PEEK: First glimpse of our upcoming @nikebasketball project. A sneaker dedicated to all the moms out there! Stay tuned for design details & launch information. #SneakerRoom #LiveTheLifestyle

New Jersey's Sneaker Room and Nike have collaborated on a number of shoe models in the past, the most recent of which was Nike Air More Money for Breast Cancer Awareness ‘Mom ‘is the pair’s newest collaboration, with the release to be announced soon.

The Kyrie 3 Mom Irving used against the Warriors had a red rose petal embroidery on its base, gloss overlay on the Swoosh, polka dot interior, translucent outsole, a leather tongue with the word MOM replacing Kyrie's own logo.

On November 14 or one game before the Warriors, Irving debuted a different version of “Mom”. This one had black laces and a golden rose embroidery. This was the pair which Irving gave to a U.S. army service woman after the game: 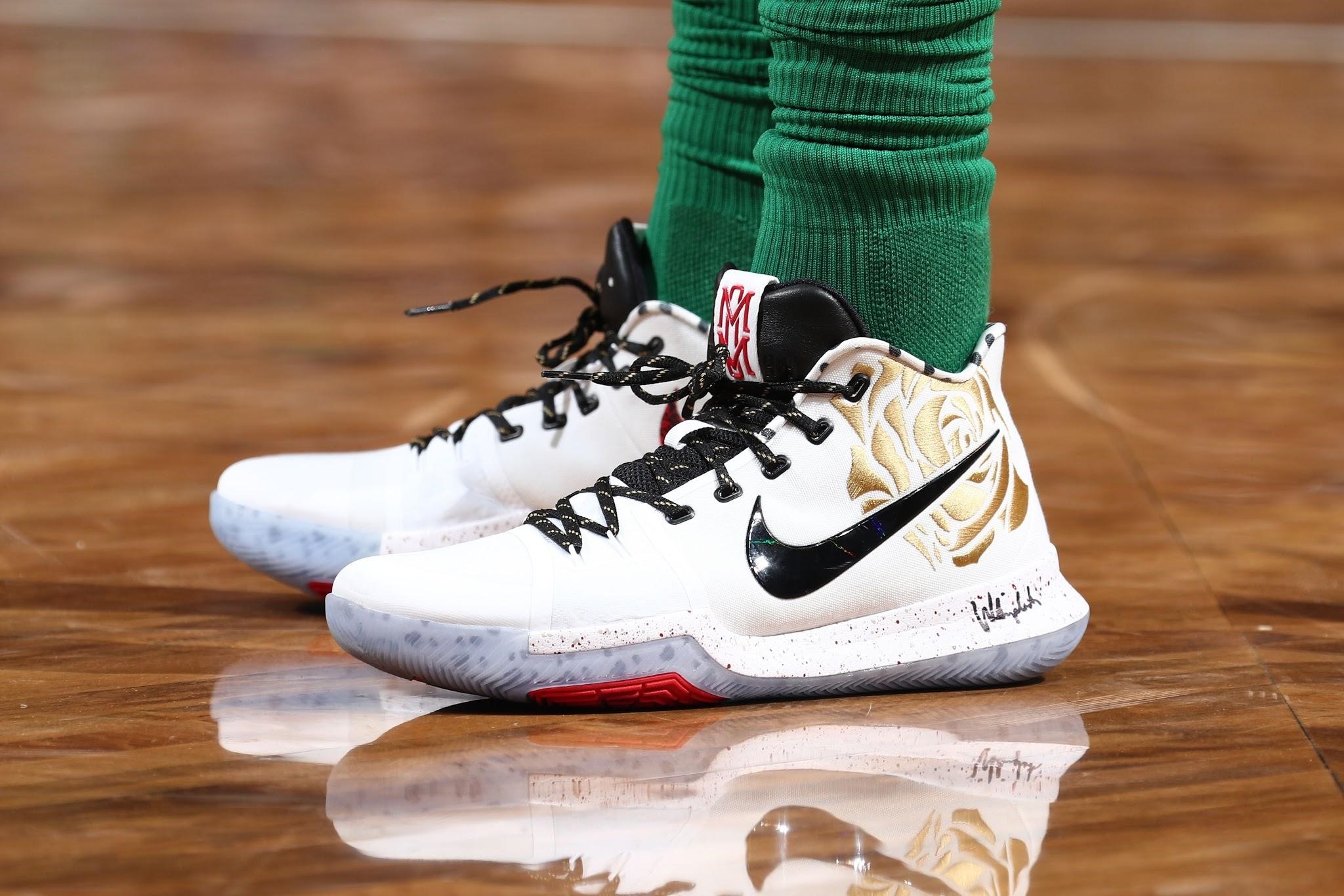 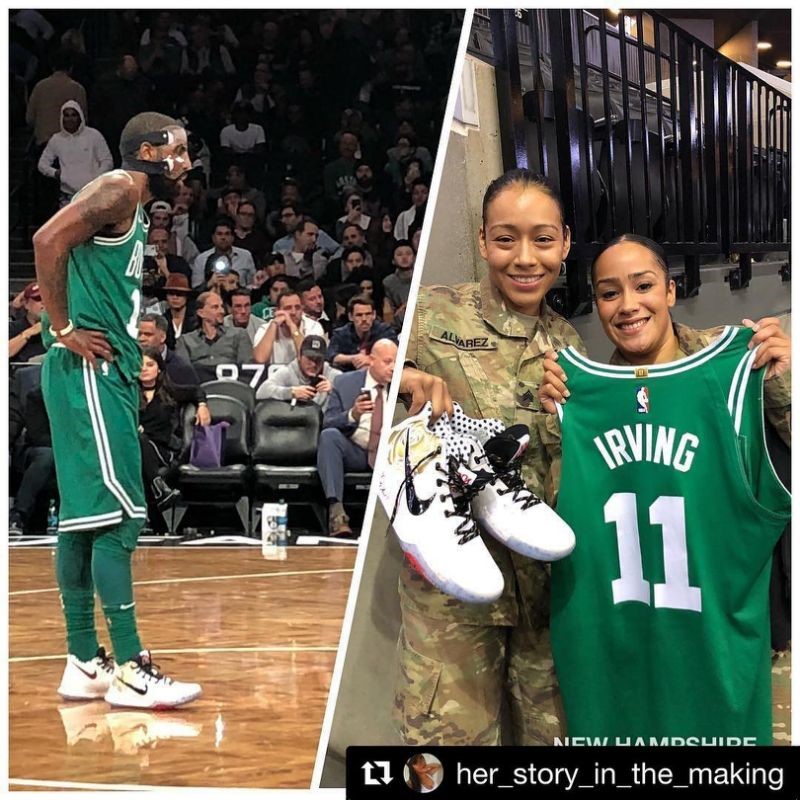 Nice gesture on paying homage to the army on Military Appreciation Night in Brooklyn. But the shoes though are on the spotlight again. 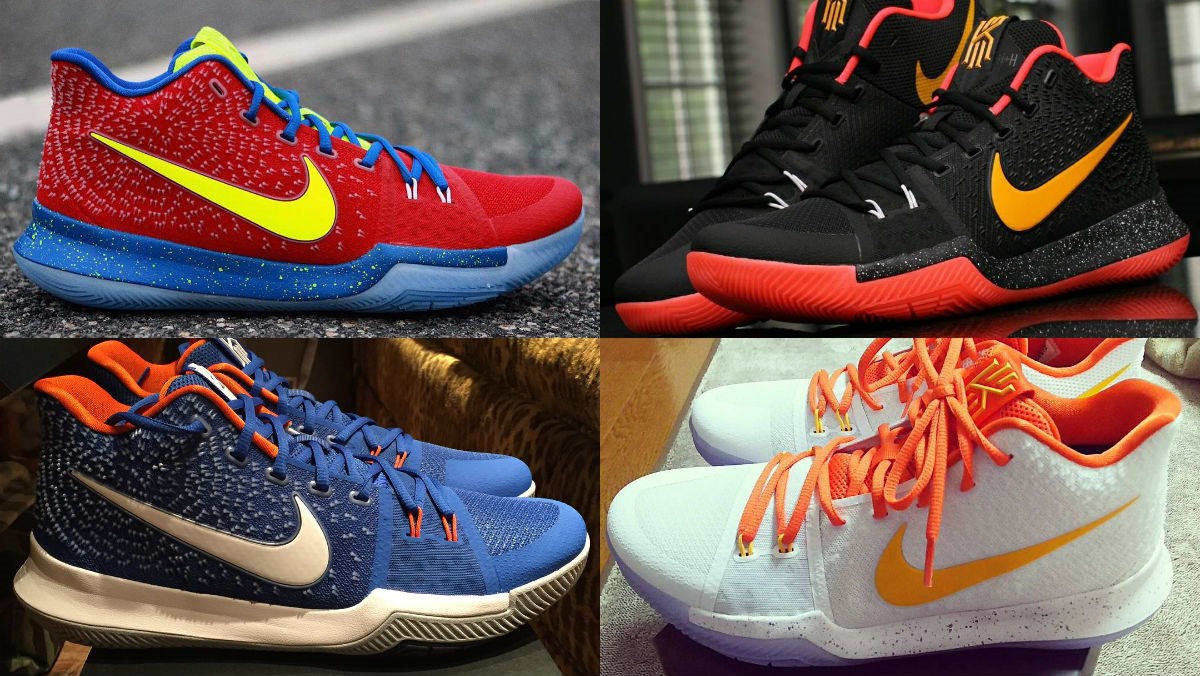 While Mom and Luck were the two of the highlighted sneakers during week 5 of the 2017-18 NBA season, those aren't the only color ways for the Kyrie 3. In fact, the Kyrie 3 has been reproduced in a lot of colorways since its launch last December. And why not? According to Nike Brand President Trevor Edwards, Irving's signature shoe is the top-selling performance basketball shoe in the market. NPD Group sports industry analyst Matt Powell confirmed that Kyrie 3 is beating the other performance shoes in the market.

The success of the Kyrie 3 mirrors the success that Irving has been having inside the basketball court. While players like LeBron James, James Harden, Giannis Antetokounmpo and Kristaps Porzingis are putting up big time numbers, Irving has been key in delivering wins for the Celtics. The Celtics haven’t lost since dropping their first two games of the season and are currently the owners of the league’s best record.

So far, it’s been a great year for Kyrie Irving, on and off the basketball court. Inside it, Irving’s full potentials are being unleashed in Boston. Outside it, his kicks continue to rise up in rank at Nike. Now are we hearing that the Nike Kyrie S1 Hybrid is coming out soon? 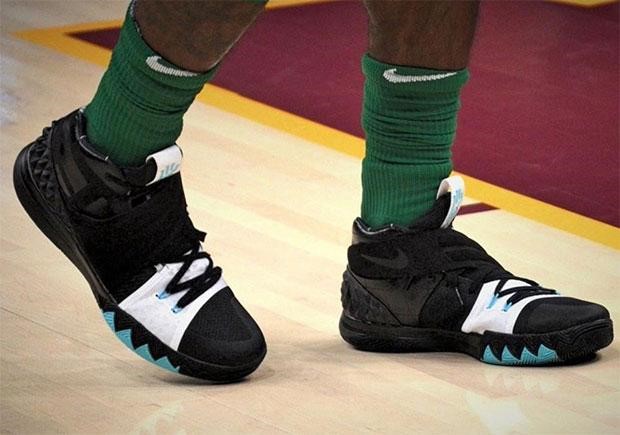 Irving wore this sneaker frankenstein on opening night but it’s not out on the market yet. When it goes out, expect it to be another blockbuster with Nike putting its marketing money on Kyrie Irving.