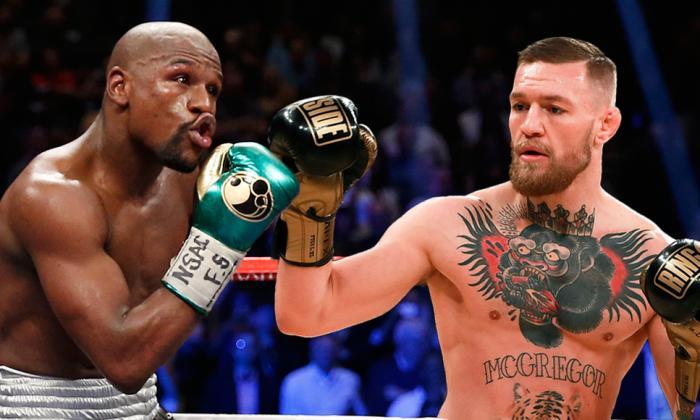 The fight has been booked. Now the fighters are busy talking fans into buying the bout.

Floyd Mayweather Jr. and Conor McGregor heated up Los Angeles’ Staples Center in the first of four press tours to promote their August 26, 2017 crossover boxing match. Given that these two are the best trash talkers in their respective disciplines, fireworks were expected. And while detractors say it was nothing more than a WWE-like presentation, the verbal exchanges were classic. Both fighters had their punchlines but whether we like it or not, Conor McGregor took round 1.

The two division UFC champion was more verbose than boxing’s undefeated pound for pound king. He articulated his thoughts pretty well and spoke them in a more organized manner.

Here are five of McGregor’s best lines at the L.A. presser:

“He’s in a fucking track suit. He can’t even afford a suit anymore! The Rolls is a 2012 outside. He is fooked.”

This was a two-in-one jab at Floyd.

While McGregor was smartly dressed in a pinstripe suit ( not pinstripe at close look. We’ll talk about that later ) Mayweather looked like he was underdressed for such a big event. But as he said during the second presser, the real men who got money don’t have to wear suits. He even cited UFC President Dana White as an example. To his credit, Mayweather wore his country’s colors in his ‘track suit.’ That was one. Being ‘fooked’ was another.

We all knew this was no more than a money fight. Now we know what the money is for. Money May needs money. Whether he’s going broke or not, we don’t know. But the IRS is reportedly hot on Mayweather’s trail and boxing’s Money man is said to have asked the taxman to wait until August 26 to get a collection. Until he settles his score with the IRS, Conor is correct. Floyd is fooked.

“As far as the fight ... he will be unconscious inside four rounds. The movement, the power, the ferociousness — he’s not experienced this. He’s fought people who have shied away from him. I don’t fear him. I don’t fear this limited set of fighting. This is a limited set of rules that makes this half a fight, a quarter of a fight. This isn’t a true fight. If this was a true fight, it wouldn’t even take one round.”

Nobody, except perhaps the Irish faithful, truly believe that Conor McGregor has a chance at winning this fight. Despite that, the Notorious One gives a definitive prediction on the outcome of the fight. McGregor’s known to correctly predict the outcome of his MMA fights. That’s why he used to be known as ‘Mystic Mac’. Remember how he predicted knocking out Jose Aldo in one round? McGregor may be a heavy underdog but he’s not lacking in confidence.

Mayweather has easily avoided the punches of the best offensive fighters of his era: Arturo Gatti, Oscar De La Hoya, Miguel Cotto, Canelo Alvarez and Manny Pacquiao. McGregor easily has the best left hand in MMA. But as to he can land cleanly on the best defensive fighter boxing has ever seen, that’s another story.

These two are fighting under boxing rules, at 154 pounds and using 10 ounce gloves. Mayweather won this part of the war, getting McGregor to agree to every demand. But what choice did the Irishman have? None because Floyd is the A-side here. But when he got the chance to speak, Mayweather said he’d fight Conor with 4-ounce gloves in an MMA contest. You think he’d really do that? No, McGregor got to his head with this statement. That’s for sure. And Conor saying all he needs is a gum shield to fight? That made him look tough. But tough enough to beat the slick Mayweather in boxing? Of course not.

“How’s this suit look? It’s a cracker. In August, McGregor line, I’ve got my own line of suits coming out. If you zoom in on the pinstripe it says, “f*** you”.

McGregor looked smart in his pinstripe suit but looked smarter at closer look. Who would’ve thought those stripes weren’t stripes after all. Those were “f*** you” words repeated over and over again. He didn’t have to pick up the mic to say his favorite words to Mayweather. The words were written all over him. Right in front of Mayweather when they stood face to face. Clever? Yes, but you bet the McGregor line is going to sell a lot of suits come August.

“I mean, no-one’s done this s*** before, you gotta give me that. No-one’s done this. No MMA guy has crossed over like this. There’s been a few times in history where people have crossed over. Muhammad Ali fought Antonio Inoki in Japan many years ago under MMA rules. He thought at the time that was a wrestling contest so that wasn’t like this. Then James Toney, who had a very big problem with the sport and a problem with the UFC, very similar to the way Floyd has, but he crossed over into our world. Floyd has a problem but doesn’t want to come over and deal with it. He wants me to come over his side. That’s no problem, I’ll do that. That’s confidence.”

This isn’t the first time MMA crossed paths with boxing. But in the two most high profile meetings between the sports, the boxers made the adjustments. Muhammad Ali fought Inoki under special rules while James Toney fought Randy Couture under UFC rules. This one’s different. McGregor fighting Mayweather under boxing rules is unprecedented and it speaks volumes of McGregor’s confidence in his boxing skills, however limited they may be. But

then again the money is too hard to say no to. He’d be making more in this fight than he’ll ever make in his entire MMA career. Who would say no? Still, McGregor made himself look like the confident underdog in this fight. That’s another victory for the Notorious One. But then again, it’s just a moral victory because the real winner will be announced on August 26.