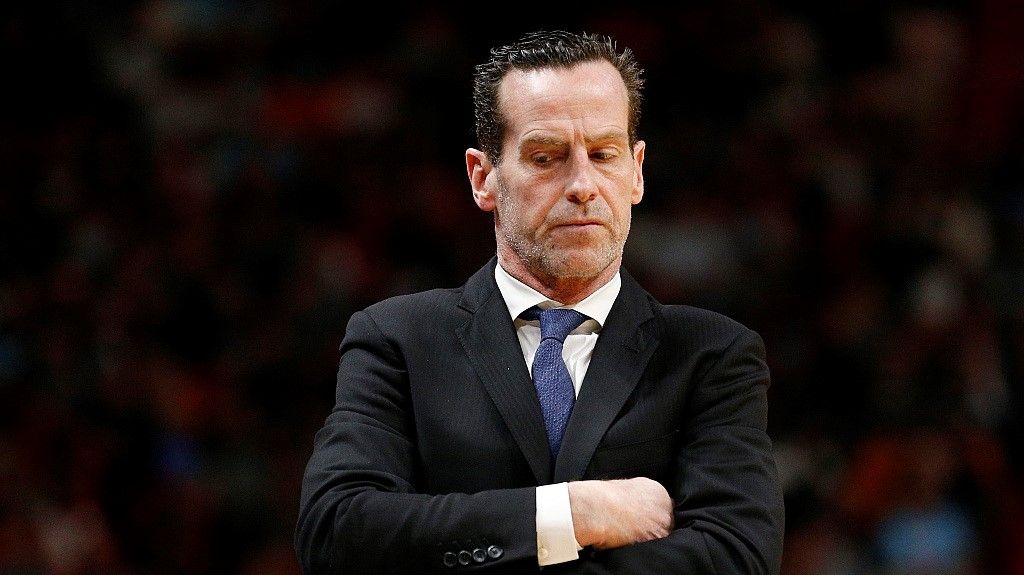 Important figures back up Atkinson’s case for next Knicks coach

Just days after reports had it that former Chicago Bulls and Minnesota Timberwolves tactician Tim Thibodeau had the inside track on the New York Knicks head coaching position, rumors are now swirling around another former Eastern Conference coach. Kenny Atkinson, who was surprisingly sacked by the Brooklyn Nets midway through this season, is now getting very positive recommendations for the Knicks job.

SNY’s Ian Begley recently wrote that Atkinson is receiving “legitimate internal support” from the Knicks organization. The 53-year old basketball strategist actually started out as an assistant coach for the Knicks from 2008-2012, before serving the same role for the Atlanta Hawks and breaking into a head coaching position for the Nets.

With regards to Atkinson, the support among some at MSG for the former Nets head coach stems, in part, from the success he's had developing young players. As a head coach in Brooklyn and an assistant with New York and Atlanta, Atkinson built a reputation as one of the top player development coaches in the NBA.”

Atkinson’s firing this season was one of the most stunning sub-plots of the 2019-20 campaign. He did a brilliant work with the pieces he had last season, leading a young underrated Nets squad to the playoffs. He helped turn around D’Angelo Russell’s dwindling value, even guiding him to an All-Star selection last year.

But with Russell gone, and newly-acquired stars Kevin Durant and Kyrie Irving recovering from major injuries, Atkinson just doesn’t have the pieces to totally compete with the best of the best. Still, the fourth-year head coach was able to make the most of the Nets’ supporting cast. The team is still sitting on the 7th spot in the East, even without Durant and Irving.

Atkinson may have compiled a losing record of 118 wins against 190 defeats in the three and a half years he coached in Brooklyn, but there was never a conversation pertaining to him as a bad coach. In fact, many important figures around the league point out to Atkinson’s brilliance as a player development coach. One of those figures is Milwaukee Bucks coach Mike Budenholzer. In an interview with Marc Berman of the New York Post, the reigning Coach of the Year emphasized how Atkinson does it all on both ends, from player development to on-court tactics.

“I’d love to see him be coach of the Knicks. It’s a great opportunity. He understands he’ll have a bunch of opportunities and situations. He’s had an amazing life with a great family. It would be a home run for him. There’s nothing like coaching the team you grew up with, he worked with. And with what they’re trying to do and where they  are.

He’s just interesting because he’s so unique in that he is so true to player development and can really help players improve. The league has gotten a lot better with [development], but he’s one of the first — his ability doing it at a super-high level. And that’s married with a guy who has a great feel for the entire sport — five-on-five, game concepts, defensively and offensively. He has a very rare high ability to execute being a good player-developmental coach.”

Should the Knicks front office pursue a path that would lead them to an Atkinson hiring, it would do plenty good for their young players. Rookie gunner RJ Barrett and sophomore defensive big man Mitchell Robinson, two high-impact young guns who could be All-Stars in a couple of years, should benefit from the development program that Atkinson would implement.

On top of that, the Knicks have an opportunity to land a Top 5 selection in this year’s draft. Pair that top prospect with Barrett, Robinson and a couple of underachieving youngsters in Kevin Knox and Frank Ntilikina, the Knicks do have an intriguing future cornerstone on their hands.

The NBA has now issued a statement allowing respective head coaches to start work with their players. A week after league commissioner Adam Silver hinted about his reservations on allowing older coaches like Gregg Popovich or Mike D’Antoni to be on the sidelines, ESPN now reports that all coaches can be with their players during the voluntary workouts.

“The NBA has given teams a full training camp timeline, with head coaches allowed to work with players beginning June 23, according to a memo obtained by ESPN's Adrian Wojnarowski.

Players traveling outside of the U.S. need to report by June 15 to team markets -- with the rest of players arriving by June 22, according to the memo. Beginning on June 23, a head coach can be one of the two coaches working with players in voluntary workouts, the memo outlines.”

With the regular season games officially resuming on July 30 at the Walt Disney World Resort in Florida, the league has also released the training camp schedule. It will run from July 9 to 29, complete with three scheduled intersquad scrimmages.

This is quite a 180-degree turn for the NBA. With the thinking that older coaches would be more vulnerable to the coronavirus, Silver talked about the possibility of not allowing them in the Orlando bubble. It was met with heavy criticism from the basketball community, especially those teams who would be directly affected.

In a column written by ESPN’s Jackie MacMullan, Houston Rockets coach Mike D’Antoni thrashed this idea and emphasized that there will never be a “zero risk” in any situation.

I know the NBA is going to make it as safe as possible for everyone involved. But there's no such thing as zero risk. I'm not worried about it because I don't think [preventing older coaches from interacting with their players on the bench] will happen. I know Adam talked about that on TNT, but since then he's walked it back pretty quick. I think he got a little ahead of himself."

But with this recently released memorandum, it is now becoming apparent that the league has indeed backtracked from that plan.