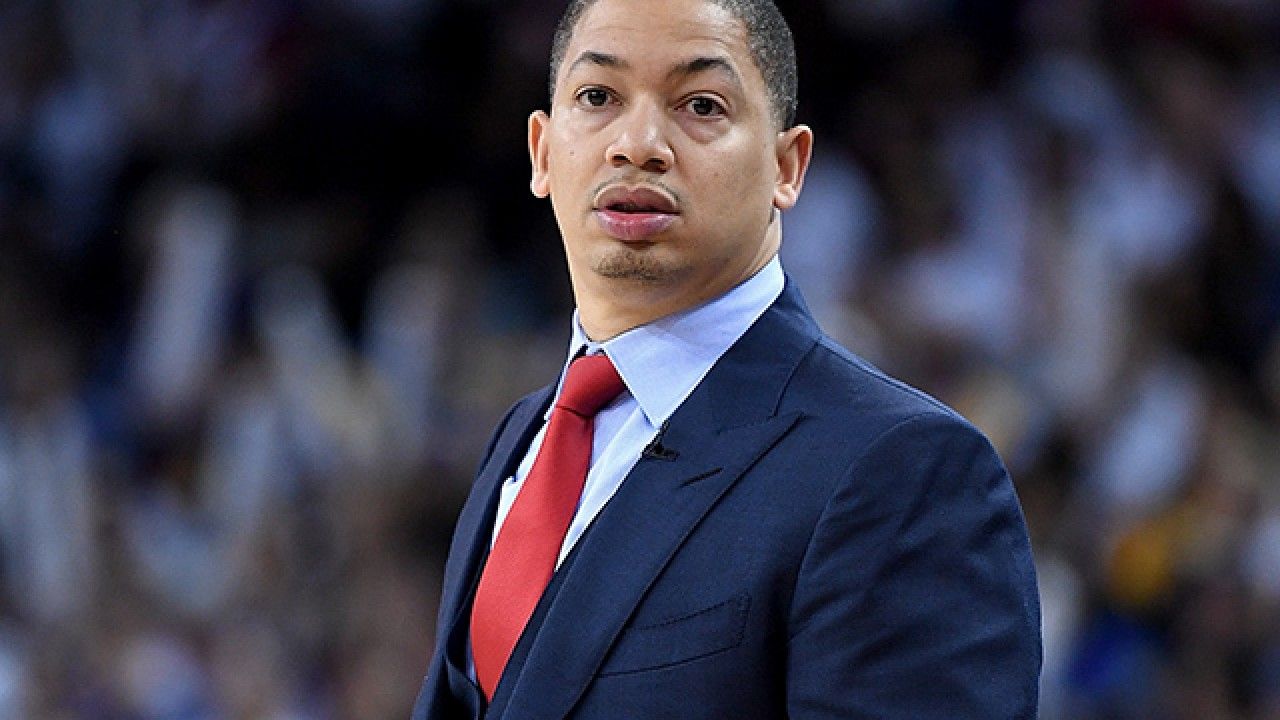 The Los Angeles Clippers have found their new coach and it was a familiar face for the franchise. The Clippers hired Tyronn Lue as their next head coach, replacing Doc Rivers, who was fired after a second-round exit in the 2020 NBA Playoffs. Lue was an internal candidate for the Clippers, as he served as the lead assistant coach of the team behind Rivers last season.

According to Adrian Wojnarowski of ESPN, Lue signed a five-year deal with the franchise. The Clippers considered several candidates in the search process until it was trimmed down to two choices. But according to Joe Vardon of The Athletic, Lue had a huge advantage over his fellow candidates because of his familiarity with the roster. The ownership group felt that Lue "can push the right buttons" with the current players that the team has.

During his one-year tenure as lead assistant, Lue reportedly developed strong relationship with the players, recognizing their different personalities and the way of handling each player. Clippers stars Kawhi Leonard and Paul George were reportedly consulted during the process. While they did not influence the front office to hire a certain candidate, both Leonard and George reportedly approved the hiring of Lue.

"Lue had a leg up on other candidates," Vardon reported. "The Clippers understood  his high Q rating with the team’s players. The Clippers consulted Leonard and George on the candidates they were considering, and what qualities they sought in a head coach, league sources said. Neither player wanted the final say on the decision, but both offered to share their input, if the Clippers saw it necessary. Ultimately, both players told the Clippers that they trusted the front office and were on board with Lue’s hiring."

The 43-year-old coach is no stranger to handling multiple superstars in a team. During his tenure as head coach of the Cleveland Cavaliers, he handled a team led by LeBron James, Kyrie Irving, and Kevin Love. During his first season at the helm, Lue managed to prove his worth, as he led the Cavaliers to their first championship in franchise history back in 2016, beating the Golden State Warriors in seven games.

The Clippers front office was reportedly impressed with Lue's versatility and his plan regarding the current roster. According to Vardon, the Clippers will have a much faster pace centered on ball movement with Lue at the helm. Their young players, who did not get a lot of opportunities under Rivers especially during the playoffs, is expected to get enough burn time to prove their worth.

"Some changes that Lue will bring to the Clippers next season include better ball movement and a faster pace," Vardon said. "The Clippers will experiment more on the defensive end, mixing in more zone coverages and varying pick-and-roll schemes. The younger players on the roster -- Ivica Zubac, Landry Shamet, Terance Mann and Mfiondu Kabengele -- will be given larger roles and more minutes. The Clippers plan to stagger Leonard and George’s minutes more, as well as testing out different role players around them to see what lineup combinations work best."

Lue will also be given the opportunity to bring his own coaching staff next season. Multiple reports confirmed that former NBA champion guard Chauncey Billups will be his lead assistant. Billups reportedly spent a lot of time with Lue during the lockdown to prepare for a jump to coaching. Larry Drew, who served as Lue's assistant with the Cavaliers, is also expected to sign a deal with the Clippers.

The Clippers will still be one of the top contenders next season if they decide to keep Leonard and George. This is reportedly the reason why Lue had the Clippers on top of his list despite interviewing for the coaching vacancies around the league. However, Paolo Uggetti of The Ringer said that accepting the Clippers job was a huge gamble for Lue because the Clippers have a lot of pressure on their shoulders next season after failing to win the title this year.

"He essentially turned down a chance to coach LeBron and win another ring to now take a job with somehow even bigger stakes," Uggetti said of Lue's decision to snub the Los Angeles Lakers last season. "If he thought the pressure the Clippers shouldered this season was a lot, it will be nothing compared to the expectations they’ll have to carry this upcoming year. Kawhi Leonard and Paul George will be free agents in the 2021 offseason, and given that the Lakers and the rest of the West seem likely to only get better, the Clippers’ clock is now ticking even faster."

Clippers owner Steve Ballmer was reportedly livid after the Clippers blew a 3-1 lead against the Denver Nuggets in the second round of this year's playoffs. The flamboyant owner reportedly has high hopes that the solution to their woes last season "was sitting right there along" the bench beside Rivers. It remains to be seen, though, how the Clippers roster will look like next season.

The New Orleans Pelicans are taking a cautious approach in their coaching search. They were reportedly interested in Tyronn Lue before he was hired by the Clippers. With Lue now out of the picture for the Pelicans, New Orleans is expected to trim their list down to the finalists for the coaching vacancy.

According to Adrian Wojnarowski of ESPN, former Miami Heat, Orlando Magic, and Detroit Pistons head coach Stan Van Gundy is expected to become a finalist for the Pelicans job. Wojnarowski revealed that the Pelicans front office are expected to name four finalists before making a decision.

New Orleans is an attractive destination for coaching candidates because of their young core led by Zion Williamson, Brandon Ingram, and Lonzo Ball. According to William Guillory of The Athletic, if the Pelicans want to hire a coach who could bring immediate changes and someone who could make the most of Ball and Williamson, they should hire Van Gundy as their next head coach.

"Van Gundy is known for making sure his teams are more mentally prepared than their opponents, and his late-game adjustments are legendary," Guillory said. "If New Orleans’ goal is to hire a smart coach who can turn the Pelicans into a smart team, there aren’t many candidates better qualified than Van Gundy. He also has a history of success with ball-handling guards and big men who dominate at the rim."

Van Gundy had success coaching big-time players like Shaquille O'Neal, Dwyane Wade, Dwight Howard, Blake Griffin, and Andre Drummond. If he gets the Pelicans coaching job, most of the focus will be on how he will develop Williamson, the first overall pick in the 2019 NBA Draft.

Williamson showed a lot of glimpse of his potential in the 24 games he played last season, where he posted 22.5 points and 6.3 rebounds. Guillory thinks that Van Gundy would be a perfect coach for Williamson because the veteran tactician could teach the former Duke University how to make a huge impact through a "cerebral approach" and not just by relying on sheer athleticism.

"It’s about finding someone who can build a relationship with Williamson that’ll get the 20-year-old to take a tough look at himself, even when things are going well on the court," Guillory said of the Pelicans coaching search. "The ability to pick Van Gundy’s mind daily would be tremendous for Zion because the veteran coach has such a brilliant way of seeing every aspect of the game and how they’re all connected."

While there were questions marks about his ability to develop a long-term relationship with his players, Van Gundy might also benefit from having a familiar face within the organization. Guillory said that JJ Redick, who previously played under Van Gundy, might have a huge influence if he decides to voice out his support for his former coach. Redick, because of his experience, is one of the most respected players within the organization.

Getting the Pelicans job will be easier said than done for Van Gundy, though, because he might face strong competition from available coaches like Kenny Atkinson and Mike D'Antoni. Atkinson has been getting a lot of attention because of how he managed to develop the young players of Brooklyn Nets like Caris LeVert, Spencer Dinwiddie, and Jarrett Allen.

D'Antoni, on the other hand, is one of the most respected coaches in the league. The Rockets were reportedly interested in keeping him, but the veteran wanted a change of scenery. D'Antoni was a strong candidate for the Philadelphia 76ers before they hired Doc Rivers. The 69-year-old coach is currently being mentioned as a possible candidate to become an assistant to rookie coach Steve Nash.

Alex Schiffer of The Athletic thinks that the D'Antoni will likely join Nash in Brooklyn to guide his former player as he begins his coaching journey. Schiffer also added that D'Antoni has developed a good relationship with Nets superstar Kevin Durant when he worked as an assistant coach for USA Basketball before.