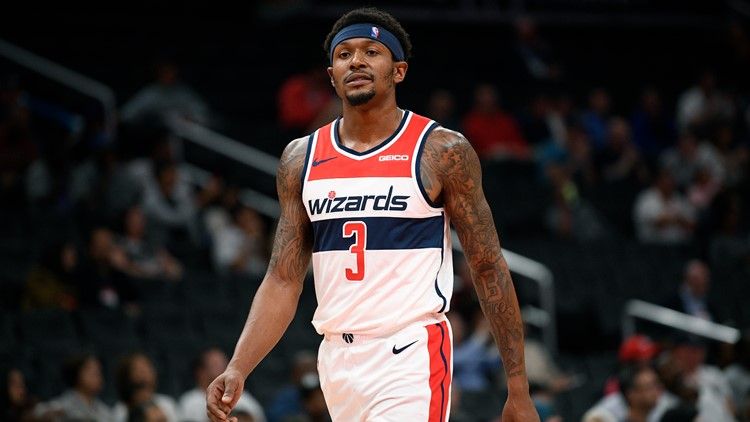 NBA Coronavirus Outbreak: Beal Will Not Play For Wizards In Orlando Bubble

Wizards will be “star-less” in Orlando

The Washington Wizards will be without their top scorer Bradley Beal when they go after a playoff spot in the NBA’s season resumption. The 9th-seeded Wizards are chasing the almost-impossible as they are holding a 24-40 record going into the Orlando bubble. But with reports now saying that Beal will not participate, their chances of entering the playoffs have lessened all the more.

In a statement released by the Wizards organization, team general manager Tommy Sheppard revealed that their star shooting guard is still not fully-recovered from the right rotator cuff injury he sustained. It’s not really known if Beal can play through the injury, but the team deemed it unnecessary to risk further setback.

Sheppard also emphasized that Beal did “everything possible” to prepare his body for the grind of the season restart, but the team’s coaching and medical staff came to the decision of having their star sit out the games.

“Bradley did everything possible to be ready to play, but after closely monitoring his individual workouts we came to the conclusion that it was best for him to sit out the upcoming games in Orlando and avoid the risk of further injury. Although he was able to play through the majority of the season with the injury, the layoff from March until now did not leave any of us feeling comfortable that he would have enough time to be ready to perform at the extremely high level we are all accustomed to seeing and agreed that not participating in the games in Orlando was the right decision.”

Beal’s absence should indeed be a huge blow to the Wizards’ already-slim chances. The 27-year old spitfire gunner is norming career-highs of 30.5 points and 6.1 assists per game, while also averaging 4.2 rebounds and 1.2 steals. It is still mind-boggling as to why the league left him out of the All-Star game, but it is of certainty that he is already a Top 5 shooting guard in the NBA right now.

Aside from Beal, the team is already without key cogs John Wall and Davis Bertans. Wall, their All-Star point guard, has been out for almost two years now. There are reports saying that he has already recovered from his injury, but is still not in a competitive shape for the restart. On the other hand, Bertans also decided to sit out to avoid being injured. The sweet-shooting big man is slated to be an unrestricted free agent this offseason, and is expected by many to garner a lucrative multi-year contract.

Going back to Beal’s injury, he and the team were already mulling the decision to sit out for some time now. In a report written by ESPN’s Ohnm Youngmisuk last Monday, Wizards head coach Scott Brooks made it known that Beal’s physical condition has continued to progressed over the past few days. However, Brooks also reiterated that the team will not get in the way if it is deemed too risky for Beal to play through an injury that is not yet fully-healed.

"He's looking great. His physical condition has been pretty good and continues to improve every day, along with our other guys. We are all getting tested every day and as of right now, he's a go, and we are all going down there ready to compete and get better and play to get in a playoff position. He looks great.

The guys that are going down there, we are going to have a system in place. The guys are going to continue to work on our conditioning and continue to slowly integrate physical contact and then get into some 3-on-3 and 5-on-5, and then we make decisions on all of our guys. We are not going to put one player on our team at risk if they are not ready to play in an NBA game.”

Howard will play in season restart

After weeks of mulling whether he will sit out or play in the Orlando bubble, Los Angeles Lakers big man Dwight Howard has decided to compete and chase the coveted Larry O’Brien championship trophy. The 15-year veteran has been one of the Lakers’ key cogs in their success this season as the former Defensive Player of the Year is putting up efficient numbers of 7.5 points, 7.4 rebounds and 1.2 blocks in just 19.2 minutes of play in every game.

During an appearance on “CNN Tonight with Don Lemon”, Howard revealed that he is committed to playing for the Western Conference frontrunners in the season restart. He said that he has a “contractual obligation” to his team, and also emphasized that he will be using his platform there to continue the fight against social injustice issues. (h/t ESPN’s Dave McMenamin)

"I have a contractual obligation to my teammates, to my fans, the Lakers, the  organization and everyone, but at the same time, I also have an obligation to my family and to my community. We will be getting a lot of work done here in Atlanta and around the nation as far as making sure people don't forget about us and what's going on in our communities.

During my time in the bubble, I will use that time to talk about Breathe Again, and I'm going to use my salary -- all the money, the paychecks that I'll be getting from going down in the bubble -- to help push this Breathe Again [initiative], push our movement and just make sure that people don't forget about what's going on in our society."

The eight-time All-Star also made it known that he will be donating his paychecks to the Breathe Again charity, another selfless act that has been quite the norm for Howard. Going into the season, there were tons of doubts if he could put away his ego and accept a bench role for the Lakers. But everyone in this new-look Lakeshow squad seemed to accept their roles, and Howard has been more than efficient in his job as a defensive anchor for the team’s second unit.

When he received the great news that Howard is indeed joining the team in the bubble, Lakers’ veteran shooting guard Danny Green expressed his excitement in having the big man around. The two-time champion also said that Howard has served an excellent leadership role for them, something that will be a big factor for their lofty championship aspirations.

“He’s been the leader he’s always been since Day 1. Continued to communicate with us, let us know what’s going on, in terms of on the court – where we can find a gym (to workout at) and off the court with the players association, injustices, coming together and using our platforms … everything, all around.

He’s been a great leader in that sense. He doesn’t lead just by his words but by example. He’s at the gym early, he’s leaving late, and he’s the last guy probably working the hardest and the longest. He’s been great. There’s a reason why he’s one of the greatest of all time.”

The Lakers will be going up against their hometown rivals Los Angeles Clippers for their first assignment in the season restart. They have a 5.5-game advantage over the Clippers for the top spot in the West, although that could have no bearing in terms of home court advantage. The team will play eight games to finish their regular season schedule, and the results of those contests will count into their current record of 49 wins against 14 defeats.

It is also widely reported that the Lakers brought in veteran gunner J.R. Smith, a move to fill in for the absence of two-way guard Avery Bradley. Smith won the 2016 championship with LeBron James during their days with the Cleveland Cavaliers. Smith should be able to bring shooting and scoring punch to the Lakers, whether he starts or fulfills a sixth man role off the bench. It is also intriguing how Lakers head coach Frank Vogel will figure out the team’s rotation, especially considering the fact that they also signed Dion Waiters mid-way through the season.