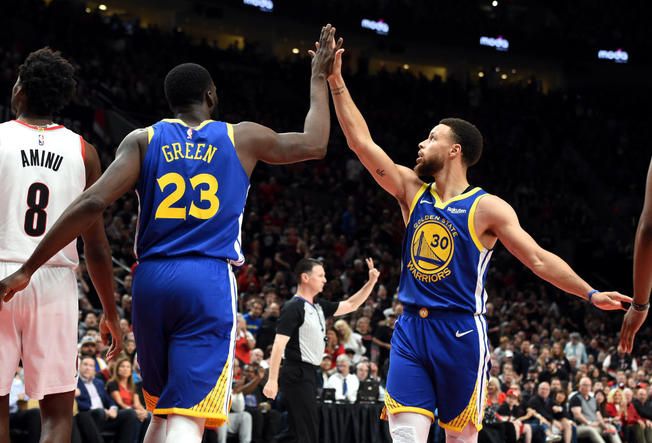 The Golden State Warriors put up yet another tremendous third quarter performance as they erased an 18-point deficit to hack out a 110-99 victory over the Portland Trail Blazers. Stephen Curry led the charge again for the defending champs, finishing with 36 points, 6 rebounds and 3 assists, while Draymond Green tallied a massive triple-double night of 20 points, 13 boards, 12 assists and 4 steals as the Warriors take a commanding 3-0 lead in the Western Conference Finals. Klay Thompson got in on the fun with an all-around outing of 19 points, 5 rebounds, 5 assists, 2 steals and 2 blocks, but it was Golden State’s championship composure that ultimately led them to the win.

The Warriors’ gallant display of incredible will to erase the Blazers’ big lead was led by the versatility of Green on both ends of the floor, as what Klay points out, per Martin Rogers of USA TODAY.

“The stat line is ridiculous. Doing it on both ends. But it is nothing new. I have seen him do it for seven years. He is a like a second point guard out there and relieves a lot of pressure off of me and Steph. He makes us go, but knowing Dray, he is  probably not satisfied.”

From Portland’s standpoint, they should be concerned about their star point guard Damian Lillard’s health as it was reported that the spitfire scorer is playing though separated ribs, per Shams Charania of The Athletic.

Lillard obviously struggled with his shots in Game 3, coming up with only 19 points on a low 5-18 shooting clip from the field. CJ McCollum topscored for the Blazers with 23 points and 5 assists, but missed 8 of his 10 shots from beyond the arc. Still, it was a golden opportunity for the Blazers to beat the Warriors at their home floor and make this series interesting. But the Warriors drew an avalanche of a second half on them, and Portland wasn’t able to recover.

It was an ugly, defensive-oriented game but Kawhi Leonard and the Toronto Raptors finally came out on top with a hard-earned 118-112 double overtime win against the Milwaukee Bucks in Game 3 of their Eastern Conference Finals match-up. Leonard led all scorers with 36 points, on top of 9 rebounds, 5 assists and 2 steals, while Pascal Siakam brushed off two crucial bonkers from the free throw line in the fourth quarter to scatter a double-double outing of 25 points, 11 rebounds and 3 steals. Most importantly, Toronto’s supporting cast showed out this time as All-Star center Marc Gasol netted a tremendous all-around night of 16 points, 12 boards, 7 assists and 3 blocks, while small forward Norman Powell came off the bench to chip in 19 markers and 6 assists.

The Raptors had the chance to close out the game in the fourth quarter as they held a 96-92 lead with only 40 seconds remaining on the clock. Bucks combo guard Malcolm Brogdon drove to the lane for a difficult finish around Leonard to trim the deficit to two, then Siakam flunked on his two free throws at the ensuing play. Khris Middleton, Milwaukee’s other All-Star this season, had the play set up for him at the baseline, attacked the rim, got blocked by Raps guard Danny Green, but stayed with it and was rewarded with an easy putback to force overtime. Both teams would then find it difficult to score during the two overtime periods, with Giannis Antetokounmpo fouling out early in the second extension period. Siakam atoned for his charity stripe misses with a big block on Brook Lopez late in the second overtime, then Leonard put on the moves to finish around the rim and give the Raptors a safe four-point lead with only seconds remaining on the clock.

When asked about his obvious limping when he appeared to sustain a non-contact injury in the first quarter, Leonard just shrugged it off and said that he’s good to go for another game, per Jeff Zillgitt of USA TODAY.

“I’m good. I’m just going to keep fighting. ... Fifty-two minutes and it’s the playoffs. You definitely feel. When you play 30 minutes, you feel it. Just got to not worry  about it and get my treatment and move on to the next one.”

It was the second unit guys for Milwaukee who topscored for the team as George Hill finished with 24 points and 7 boards, and Brogdon amassing 20 markers. Giannis again struggled in taking care of the ball, committing 8 turnovers, but did everything he could on both ends of the floor with 12 points, 23 rebounds, 7 assists and 4 blocks.