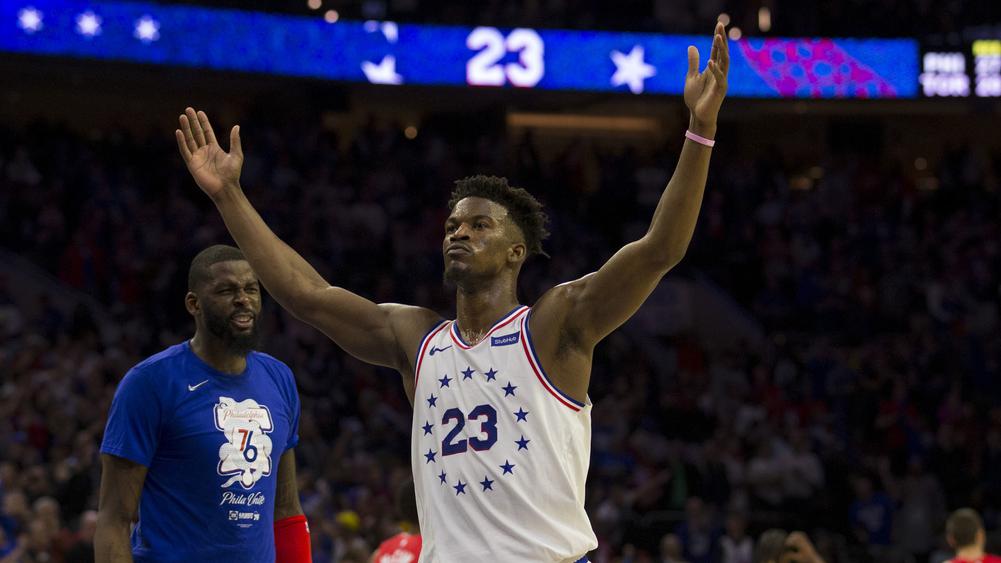 The Philadelphia 76ers didn’t waste any time getting into a rhythm as they stormed out the gates from the opening period to carve a convincing 112-101 victory over the Toronto Raptors. All-Star swingman Jimmy Butler topscored for the Sixers with 25 points, 8 assists, 6 rebounds and 2 steals, and was a main cog in Philly’s inspired first half that saw them erect a 15-point lead after two quarters. Joel Embiid, despite reportedly being sick, came through with a double-double performance of 17 points, 12 rebounds and two big blocks on Raptors superstar Kawhi Leonard in the final period.

But the player who starred the most in Game 6 was the 22-year old sophomore point guard Ben Simmons, who had his imprints all over the place. Simmons put up an all-around stat line of 21 points, 8 rebounds and 6 assists, but his energy and court smarts energized a Philly squad with their backs on the wall. Sixers head coach Brett Brown says that Ben was quite the leader of the team in Game 6, per Andrew Porter of the 94WIP Sports Radio.

“For Ben to be our bell-ringer with some of those other performances sort of confirms what I think he did tonight. His no turnovers, his attack mode, I think he had four offensive rebounds, his push and pace on missed shots especially, all those things were what made him be an NBA All Star at 22-years-old. And I thought he was excellent tonight and we needed it all.”

The Raptors still got an excellent double-double outing from Leonard, who produced 29 points, 12 rebounds and 5 assists to lead the visiting team. Pascal Siakam chipped in 21 points and 6 boards, but Toronto only managed to make 9 of their 36 shots from deep, most of them uncontested shots. The Raptors also did a poor job in controlling the boards, giving up 16 offensive rebounds to the Sixers. Siakam knows that this was one of the main factors for their loss, per ESPN’s Kevin Arnovitz.

"We've got to rebound the basketball better and just kind of limit the transition. We've got to limit them to one shot and make them play in the half court."

Game 7 of this back-and-forth series is slated at the Scotiabank Arena at Toronto.

The Portland Trail Blazers again relied on their star backcourt duo as they staved off elimination to defeat the Denver Nuggets, 119-108. All-Star point guard Damian Lillard led all scorers with 32 points and 5 assists, while CJ McCollum netted 30 points of his own, on top of 6 rebounds and 3 assists. The Portland bench was again instrumental in the win, with Rodney Hood tallying 25 big points and Zach Collins scattering 14 markers, 4 boards, and a massive count of 5 rejections. The Nuggets actually started out the better team as they had a 34-26 lead after the first quarter, but the Blazers were able to weather the storm as they dictated the tempo of the rest of the game.

Still, the X-Factor of this series is Hood, who was also a key performer during the Blazers’ quadruple-overtime win in Game 3. Even Nuggets head coach Mike Malone gave heaps of praises for the lefty gunner, per Sean Meagher of The Oregonian.

“You can’t speak enough about Rodney Hood. Not just the impact that Rodney had  tonight, but the impact he’s had the whole series. He averaged three points a game in the first round. So talk about a young man stepping up and taking advantage of a situation in an elimination game. It was a great performance by Rodney Hood.”

However, Malone also believes that his squad has the advantage going into Game 7, which will be held in Denver, per the Associated Press.

"I thought our Game 6 here in Portland was better than our Game 6 in San Antonio.  Now we go home and have the best home-court advantage in the NBA."

Nikola Jokic led the way for the Nuggets with 29 points, 12 rebounds and 8 assists, while Jamal Murray came up with a double-double outing of 24 points and 10 boards.