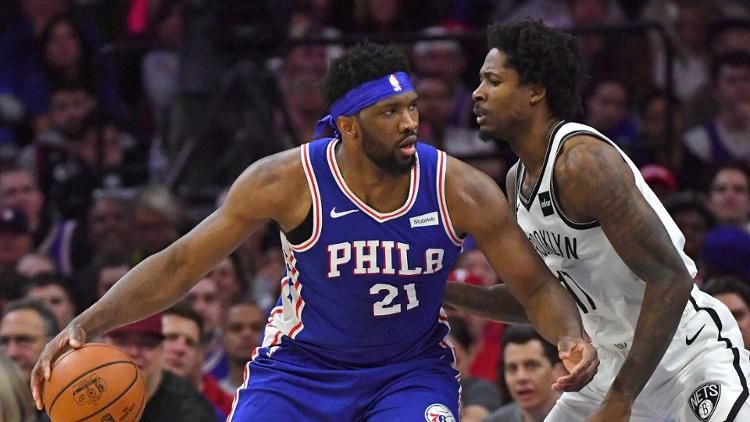 Starting things off with a spirited run in the opening canto, the Brooklyn Nets put on quite the show in Game 1 to shock the Philadelphia 76ers, 111-102. All-Star point guard D’Angelo Russell topscored for the Nets with 26 points and 4 assists, while Caris LeVert came off the bench to chip in 23 points and 4 boards. Combo big man Ed Davis had himself a double-double of 12 points and 16 rebounds, as Brooklyn continued their magical run with this massive Game 1 win. Russell, who led his team with 19 points in the second half, reiterates that the battle has just began and people shouldn’t count out Philly just yet, per Kevin F. Love of SB Nation.

“It’s early to tell. Trying to add our regular-season games into this series is just  impossible to do, but when you got a player like Jimmy [Butler] and Joel [Embiid]  over there, like those caliber players, you can never count them out. Our job is to  keep getting stops, have a defensive-minded mentality going into the game and our  offense clicks so we’re not really worried about our offense.”

It’s also worth noting that Sixers star center Joel Embiid, who is still dealing with a minor knee injury, played only 24 minutes, obviously an indicator that the team is limiting his playing minutes. Embiid still put up a double-double outing of 22 points, 15 rebounds and 5 blocks, while Jimmy Butler tallied a game-high 36 markers in the loss. All-Star point forward Ben Simmons only had 9 points in the game, while Tobias Harris was entirely passive with his shots, putting up just seven attempts and finishing the game with just 4 markers.

Arguably the least talked-about point guard in this playoffs, 31-year old D.J. Augustin re-introduced himself to basketball fans with a clutch three-pointer to carry the Orlando Magic past Kawhi Leonard and the Toronto Raptors, 104-101. Augustin led the charge for the Magic with a game-high 25 points, including the last five points that gave the visiting team a safe three-point lead with a little over a second remaining on the clock. It was also a balanced offensive attack for an Orlando squad that saw seven of their players put up double-digit markers. A Leonard baseline fade-away jumper put the Raps up by 101-99, before the 6-foot-flat Augustin made a beeline to the hoop for a creative finish, tying the game at 101. Toronto failed to capitalize on the other end, providing the stage for the Augustin game-winning triple.

Here’s what Augustin has to say after the gut-wrenching victory, per Rachel Brady of The Globe and Mail.

“Nobody expected us to be here today or win tonight. We’re a team that’s not gonna give up.”

The heroics of Kawhi weren’t enough to turn back the Magic, who finished the regular season by winning 11 of their last 13 games. Leonard led Toronto with 25 points and 6 boards, while Pascal Siakam had a near double-double of 24 markers and 9 rebounds. Outdueled by Augustin, All-Star point guard Kyle Lowry laid an egg on the scoring department, but had 8 assists and 7 boards in the defeat.

The Stephen Curry show was in full effect as the Golden State Warriors take Game 1 with a convincing 121-104 drubbing of the Los Angeles Clippers. Curry logged in one of his best playoff performances ever, tallying 38 points, 15 rebounds, and 7 assists, while making eight of his 12 attempts from beyond the arc. Kevin Durant, who was ejected at the latter part of the fourth quarter due to an altercation with Clippers defensive guard Patrick Beverley, contributed 23 points, 4 boards and 3 blocks for the defending champs. It was also a historic night for Curry, who passed Ray Allen for the most made three-pointers in playoff history. Doc Rivers, the head coach of the opposing team, couldn’t help but marvel at Curry’s ability to be an excellent game-changer.

“He’s great, he’s a great player. I was telling the coaching staff I still think Stephen  Curry is one of the most underrated players in the NBA. I don’t even know how that  happens, but he is. He’s taken for granted. All I know is when he’s on the floor, he’s  a handful, and he makes them better in so many ways. He was one of their best  rebounders today.”

Leading Sixth Man of the Year candidates, Lou Williams and Montrezl Harrell, topscored for the Clippers with 26 and 25 points, respectively. Young point guard Shai Gilgeous-Alexander had one of the better playoff debuts for a rookie as he finished with 18 points, 5 boards and 3 blocks in the Game 1 loss.

Spurs use defense and late-game execution to escape in Denver

Through the all-around brilliance of star shooting guard DeMar DeRozan and their vaunted defense, the San Antonio Spurs handed the 2nd-seeded Denver Nuggets a rousing 101-96 defeat. DeRozan, who was much-criticized for his lowly playoff showing last year, carried the team with an all-around outing of 18 points, 12 rebounds and 6 assists, including some clutch makes in regulation. Derrick White was also instrumental for the Spurs as he scattered 16 points, 5 assists, 3 boards and a game-deciding steal off Nuggets point guard Jamal Murray when Denver had the chance to tie game in the dying seconds. Spurs head coach and master tactician Gregg Popovich praised White’s stability on the playmaker role, via the Associated Press.

“He was spectacular. For somebody who got put in that position and to learn that position with a bunch of new players, it’s really remarkable what he’s done. Hopefully, he’ll continue to play that way because it’s going to be a long series.”

The Game 1 victory also puts Popovich at the top of the all-time head coaching wins with 1,413, passing the great Lenny Wilkens for the top spot. Gary Harris topscored for the Nuggets with 20 markers, while All-Star center and MVP candidate Nikola Jokic pulled in 14 rebounds and 14 assists, but had a quiet scoring night of only 10 points.