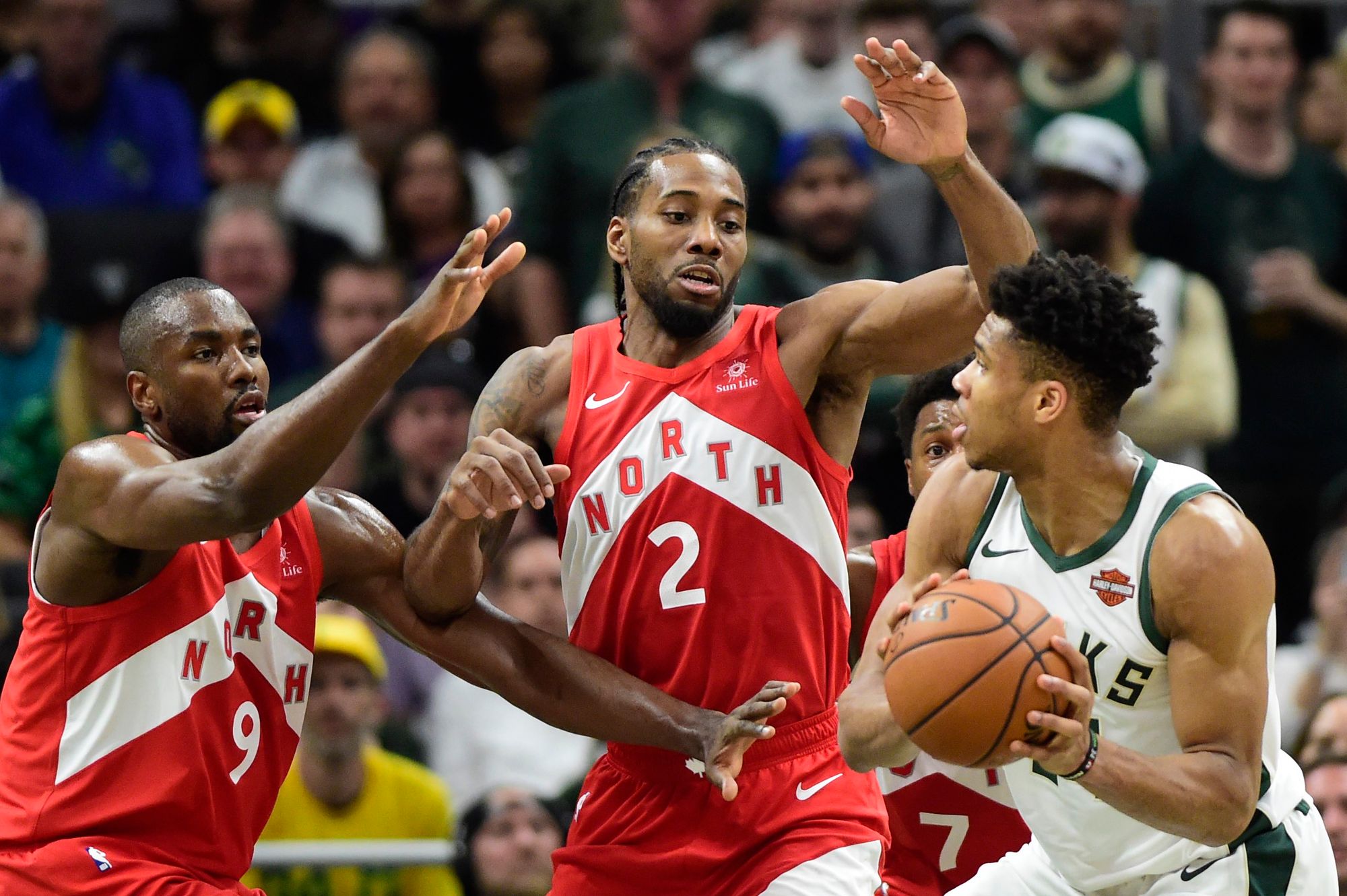 Kawhi Leonard and the Toronto Raptors had to erase multiple double-digit deficits in Game 5 as they successful mounted a comeback to rally past Giannis Antetokounmpo and the Milwaukee Bucks, 105-99. Leonard turned in another all-time playoff performance as he finished with 35 points, 9 assists, 7 rebounds and 2 steals, including several difficult shots to bail out the Raptors in regulation. Back-up point guard Fred VanVleet continued his new-found hot shooting streak with 21 points off the bench, built on seven makes from beyond the arc. The Raptors weathered the storm that their opponents brewed as the Bucks hacked out an 18-3 run to start the first quarter. Toronto came back to chip away at the deficit, but Milwaukee still had a double-digit lead during the mid-way point of the third period. Facing a large deficit on the road, the Raptors turned to their superstar to carry them in the deciding period. Leonard hit two consecutive step-back trifectas over the outstretched arms of Bucks center Brook Lopez to give his team an 85-81 lead with seven minutes remaining in the quarter. Pascal Siakam’s putback dunk gave the Raps an eight-point cushion, but it turned out to be a back-and-forth affair from that point forward.

A Lopez drive to the rim cut the Raptors’ lead to four points, only to be answered by a Marc Gasol triple in the ensuing possession. Milwaukee would then answer in a big way as two consecutive baskets, capped by a Giannis three-pointer trimmed Toronto’s lead to 92-90. Then Lopez popped a triple of his own in the two-minute mark of the contest, tying the game at 93. But VanVleet would not be deterred as he hit another trifecta, while Giannis answered with an alley-oop dunk off a Malcolm Brogdon lob. From that point, Kawhi would will the Raptors on his shoulders as he made two straight trips to the free throw line and gave his squad a 99-95 lead with a little over a minute remaining on the clock. A Siakam breakaway dunk ultimately iced the win for the Raptors, who have suddenly come alive and have taken a commanding 3-2 lead in the series.

Kawhi, who put up 15 of his 35 points in the fourth quarter, says that his mindset during the game was to get to his spots and involve his teammates on offense, per Jeff Zillgitt of USA TODAY.

"I'm not afraid of the moment. I enjoy it. And this was our workout for the summer. You've just got to go out and shoot the ball, I guess. That's my mindset. Get to a spot, try to help my teammates win the game.

Just trying to win, either if it's me scoring points or getting my teammates wide-   open looks, just out there trying to win. It's not really about me scoring, it's just about being aggressive and don't shy away from anything."

But it wasn’t just on offense where Leonard impressed – his defense was equally tremendous, according to Raptors head coach Nick Nurse.

"As impressive as his offense is — and it's impressive — I get more impressed when he's down there guarding and making plays and blocking shots and flying in for rebounds. My favorite thing is when he just decides once or twice a game to just go take it from somebody and go the other way. Those are huge momentum plays, and  that's impressive to me."

Antetokounmpo topscored for the Bucks with 24 points, 6 rebounds and 6 assists, but found himself shut down in the fourth quarter. Brogdon scattered an all-around outing of 18 points, 11 boards and 6 assists, while Eric Bledsoe and Brook Lopez chipped in 20 and 16 markers, respectively. After claiming the first two wins of the series, the Bucks have suddenly found themselves in the brink of elimination as they play Game 6 before a hostile crowd in Toronto.