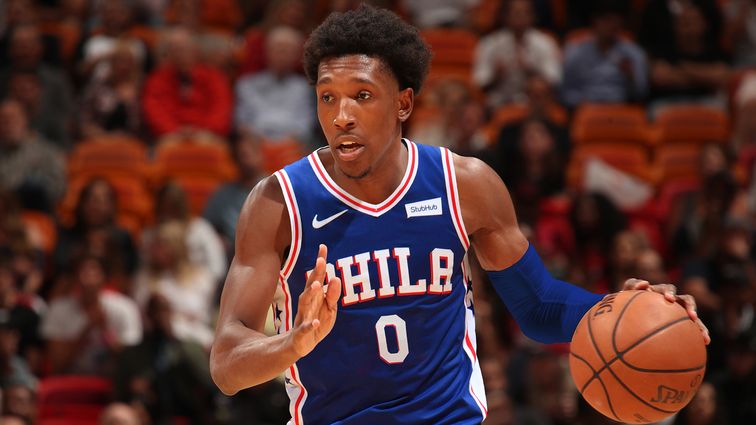 Richardson impress on both ends as Sixers win

Philadelphia 76ers recently-acquired combo guard Josh Richardson showed off his versatile skill set as he and his new team trounced the Orlando Magic, 126-94. The former Miami Heat cager did it all as he finished with an all-around stat line of 13 points, 4 rebounds, 5 assists and 5 steals. It was a great reminder of what Richardson can bring to the table on both offense and defense. After the victory, Sixers All-Star point guard Ben Simmons gave positive remarks on how Richardson is fitting into the team so far, per Keith Pompey of The Philadelphia Inquirer.

"He’s been amazing so far. Defensively, obviously he’s been a presence communicating with everybody. But offensively, he’s gifted. He can get to the rim and shoot the ball. He has great touch and he’s been a great addition so far.”

Aside from the scoring and defensive abilities he put in, the Sixers also get the luxury of having an excellent backup point guard in Richardson. Although he is already a regular starter for the Sixers, head coach Brett Brown obviously employed a strategy in which he staggered J-Rich’s minutes with Simmons. Through that strategy, he served as the Sixers’ point guard when Simmons sits on the bench.

Philly superstar big man Joel Embiid topscored for the team with 15 points and 9 boards, while Tobias Harris totalled 14 markers. Al Horford, another offseason pick-up for the Sixers, started alongside Embiid and contributed 11 points and 4 rebounds in just 19 minutes of action. Rookie shooting guard Matisse Thybulle was again consistent off the bench as he put up 10 markers.

Despite the loss, the Magic got another solid outing from Markelle Fultz. Fultz, the 2017 top draft pick, led the team with 12 points, 5 assists and 2 steals. Seeing the third-year combo guard play his game was a sight to behold. The young gunner endured a major shoulder injury that forced him to repetitively tweak his shooting form. Amidst all the criticism he took, this season might be the year Fultz finally breaks out. His recent performance earned him the praise of his former head coach. Brown detailed what he liked the most in Fultz’ offensive skill set.

“He’s hard to guard. He has that downhill fluid motion where you think you got him stopped and he can spin back and find cracks and find seams. He’s so long that he get his shot over bigs in the paint.”

Sophomore center Mohamed Bamba displayed his long-range ability with two three-pointers on his way to 12 points, 3 boards and 2 rejections. Al Farouq-Aminu, a new face in Orlando, also contributed 12 markers off the bench.

The Boston Celtics displayed a very strong showing on the defensive end as they beat the helpless Cleveland Cavaliers with a convincing 118-72 victory. The home team held the Cavs to a 26-point first half, including just 9 total points in the second quarter. Rookie wing Max Strus led Boston in scoring with 14 points, built on four makes from beyond the arc. Kemba Walker scored 12 markers in just 15 minutes, while Jaylen Brown showed the full repertoire as he finished with 10 points, 3 boards and 3 assists.

Still, it was defense that won the game for the Celtics. Cleveland only shot a poor 32% from the field, including a measly 7-40 clip from three-point territory. Cavaliers starting power forward Larry Nance Jr emphasized how Boston’s lengthy wing players made it hard for him and his teammates to really get it going on offense, per NBC Sports Boston’s Michael DePrisco.

"You know, they're a pretty big team. You know, obviously Brown, Tatum, Hayward on the wings is not easy. This is historically a really good defensive team, so I assume they're going to be that this year."

Sindarius Thornwell topscored for the Cavaliers with 12 points and 5 boards, but he was the only player who scored in double-digits for his team. Nance and Margues Bolden had nine points apiece as Cleveland lost their second straight preseason game. Veteran big men Kevin Love and Tristan Thompson, along with prized rookie guard Darius Garland, didn’t play for the Cavs.

LaVine puts on another shooting display in Bulls victory

Spitfire guard Zach LaVine showed that his previous explosive performance were no flukes as he led the Chicago Bulls to a rousing 105-91 win over the defending champions Toronto Raptors. LaVine had a game-high 26 points, efficiently making nine of his 14 field goal attempts. He also grabbed 5 rebounds, dished off 4 assists and stole the ball twice to produce an all-around outing for the winning team. Rookie point guard Coby White also joined the show as he contributed 18 points off the bench, while stretch big man Lauri Markkanen pulled off a double-double night of 15 points and 13 boards.

Known as a one-dimensional star due to his tunnel focus on offense, he has been on the receiving end of many criticisms. But after the game, LaVine emphasized how hard he is working to improve his skills on defense. The young budding star had two steals against the Raptors, and was obviously more active on that end. What could be his motivation for improving his defense? Here’s LaVine’s statement, as per Darnell Mayberry of The Athletic.

“I’m just tired of people talking shit about my defense. I’ve always been a good on-ball defender. But there’s no reason I can be this good offensively and not be that good on the defensive end. So I’m taking more pride in it. I’m pretty sure it’ll show. I’ll make sure of that.”

The ex-Minnesota Timberwolves star is already posting an excellent stat line of 23.3 points, 4.7 boards, 3.3 assists and 1.3 steals this preseason. If he can show off a more consistent performance on defense, LaVine may well be on his way to an All-Star appearance.

OG Anunoby, the Raptors’ promising forward who missed most of last season, led his team with 15 points, 4 assists and 2 steals. Toronto missed the services of their key players in the loss. Kyle Lowry is still recovering from the thumb surgery he went through in the summer, while the team’s coaching staff opted to rest Pascal Siakam, Marc Gasol, Fred VanVleet and Serge Ibaka.