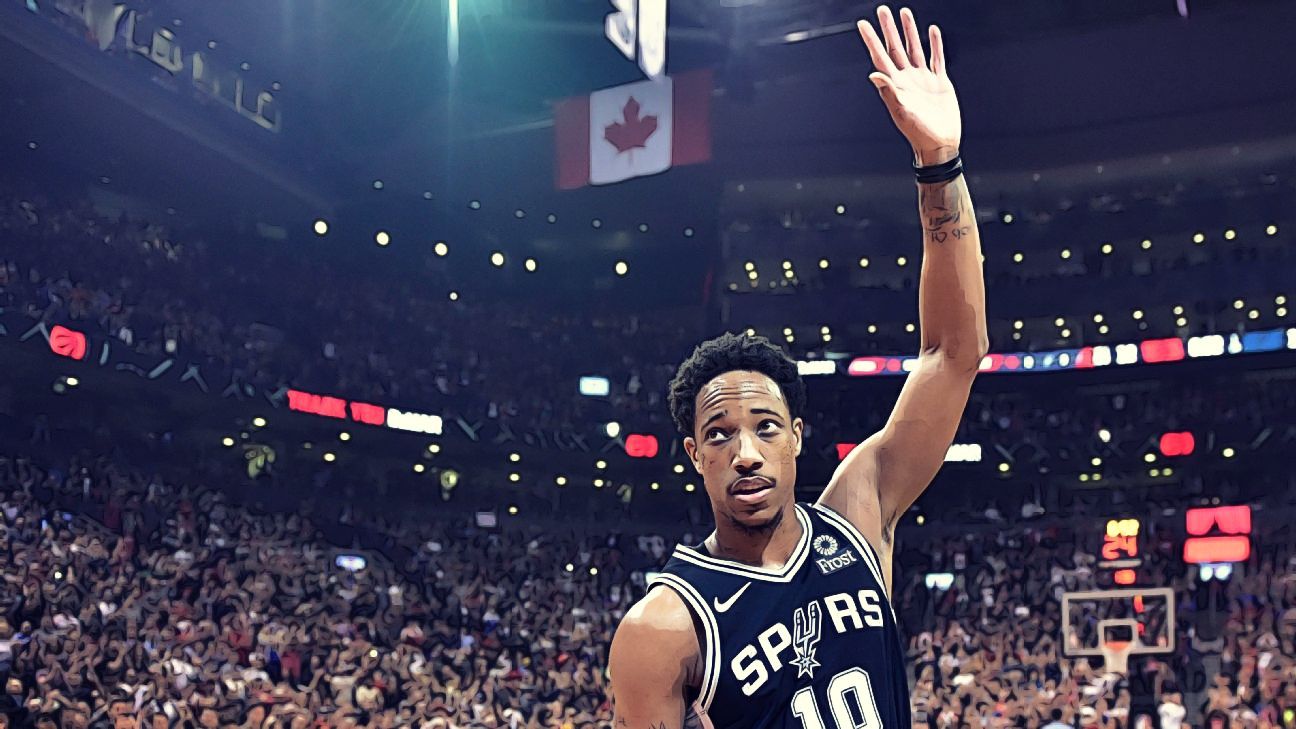 In a night when DeMar DeRozan finally returned to the court where he spent the first nine years of his team, it was the Toronto Raptors who emerged victorious as they defeated the visiting San Antonio Spurs, 120-117. Kawhi Leonard, the star forward who the Raptors exchanged DeRozan for, led the home team with 25 points and 6 rebounds, including crucial plays down the stretch. DeRozan was tallied 23 markers and 8 assists in his first game back in Toronto, but had two consecutive broken plays that ultimately crashed the Spurs’ hopes of stealing a road win. First, DeRozan fumbled the ball while being double-teamed by former teammate Kyle Lowry and Leonard, leading to a breakaway dunk by Kawhi to give Toronto the lead. Then with a chance to reclaim the lead, DeRozan would pass up the chance to hit a mid-range jumper – a shot he has always made in his career. Pascal Siakam chipped in 22 points in the win, while Serge Ibaka contributed another double-double of 13 points and 15 boards.

Spurs shooting guard Marco Belinelli helped the team’s cause with 21 points off the bench, but All-Star big man had an unusually-quiet night, only finishing with 6 points in the loss. The defeat drops the Spurs to a 33-27 record, while the Raptors climb to 44-16, just 1.5 games behind the league-leading Milwaukee Bucks.

After coming out the gates flat in the first period, Kemba Walker and the Charlotte Hornets would put on a commanding second quarter performance and never looked back from there to beat the Washington Wizards, 123-110. Walker topscored for the Hornets with 27 points and dished out 11 assists to complete a double-double night. All the Hornets’ starters put up double-digit scoring, with Nicolas Batum tallying 20 points and 8 rebounds. Jeremy Lamb, one of the team’s most consistent scorers this season, scattered 16 points and 4 steals off the bench.

Wizards All-Star shooting guard Bradley Beal exploded for 46 points on just 25 shot attempts, on top of 7 assists and 6 rebounds. But that was not enough for the visiting team as their overall defense failed to stop Charlotte’s efficiency on the offensive end. It’s the third consecutive loss for the Washington, dampening their playoff hopes as they fell to a 24-35 record.

Despite not a single player cracking 20 points in the game, the Denver Nuggets turned to their excellent roster depth to turn back the Dallas Mavericks, 114-104. All-Star center Nikola Jokic almost came up with another triple-double, finishing with 19 points, 13 rebounds and 8 assists in the win. Veteran forward Paul Millsap also tallied a double-double of 17 points and 13 rebounds, while scoring point guard Isaiah Thomas came off the bench to produce 16 points in just 15 minutes of play. Seven Nuggets player put up double-digit points, including everyone from the starting line-up.

George and Westbrook combine for 88 points in double overtime victory

The game was as close as it can be but the Oklahoma City Thunder showed more poise at the end, hacking out a hard-earned 148-147 double-overtime win over the Utah Jazz. All-Star forward Paul George came up with the game-winning bucket on his way to tallying a game-high 45 points, 9 rebounds and 7 assists. Fellow All-Star teammate Russell Westbrook also exploded for 43 points on six made three-pointers, but fouled out with a little over a minute remaining in the first overtime. Westbrook, who also grabbed 15 boards and 8 assists, failed to extract a triple-double, halting his streak to eleven games. George’s high-arching floater over the outstretched arms of Jazz defensive center Rudy Gobert proved to be the game-winner.

The Jazz got 38 big points from sophomore shooting guard Donovan Mitchell, who hit clutch baskets and crucial plays. Gobert chipped in 26 points and hauled down 16 rebounds, while Derrick Favors contributed 24 markers and 11 boards.