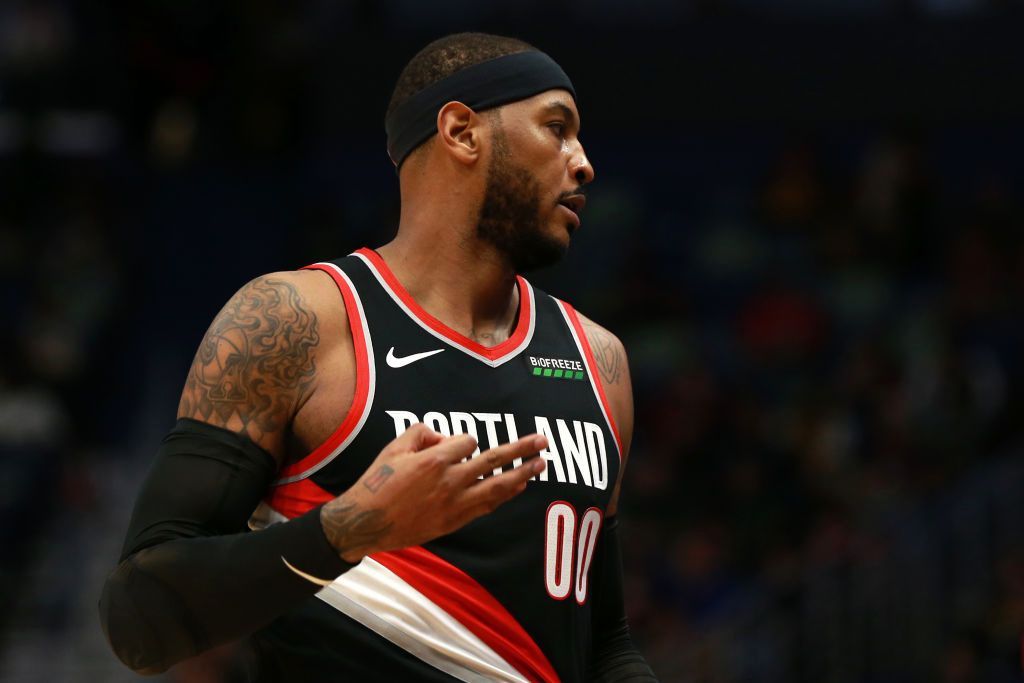 Despite all the hype that came with the return of ten-time All-Star Carmelo Anthony, it was the New Orleans Pelicans who stole the show as they defeated the Portland Trail Blazers, 115-104. Young budding star Brandon Ingram returned from a four-game absence to put up an all-around show of 21 points, 7 rebounds, 5 assists and 2 steals. Jrue Holiday came up with a double-double performance of 22 points and 10 assists, while veteran gunner JJ Redick fired four three-pointers on his way to 18 markers.

The 22-year old Ingram didn’t look rusty as he should have after recovering from a right knee soreness injury. He even announced his return with an emphatic poster dunk in the first quarter, a great indicator that he is now fully healthy. Ingram reiterates that he didn’t have any restrictions to his movements or minutes entering the game, per Brett Martel of The Associated Press.

“I think trying to get to my spots and assert myself a little bit and getting other players involved, I think I did an OK job. I felt pretty good today. I didn’t have any restrictions.”

It was also the Pelicans’ third win in the last four games. Despite missing prized rookie Zion Williamson and the services of their key players, the young Pelicans squad is finally coming together and racking up the wins.

CJ McCollum led the charge for the Blazers with 22 points, 5 assists and 2 steals. Hassan Whiteside had himself a double-double night of 14 points and 14 boards, and young point guard Anfernee Simons contributed 13 markers. The Blazers played without superstar Damian Lillard, who is currently sidelined with back spasms.

It also marked the return of Anthony to the NBA. The three-time Olympic gold medallist poured in 10 points and 4 rebounds, but showed quite the rust as he turned the ball over five times and missed 10 of his 14 shots from the field. Still, Anthony says that he just needs to get himself more on the flow of the game but he felt his conditioning is already “great.”

Rookie Nassir Little came off the bench to also contribute a double-double stat line of 12 points and 11 boards, while Kent Bazemore chipped in 11 markers, including three makes from beyond the arc. Melo and the Blazers will try to arrest their two-game skid when they visit Milwaukee to face Giannis Antetokounmpo and the Bucks. Reports have it that Lillard is still set to miss the big game in Milwaukee.

The depleted Sacramento Kings banked on the heroics of swingman Bogdan Bogdanovic as they beat the Phoenix Suns, 120-116. Bogdanovic easily had his best game of the young season, finishing with 31 points, 7 assists and 3 steals. On top of that, the Serbian shooting guard was very efficient in offense, making seven three-pointers and missing just three of his 14 total field goal attempts. Richaun Holmes dominated on the inside with 20 points, 15 rebounds and 2 blocks, while his frontcourt partner Nemanja Bjelica totalled 17 points and 8 boards.

The Kings, who played without key cogs De’Aaron Fox and Marvin Bagley, raced right out the gates with a 33-point first quarter. The Suns eventually caught up in the fourth quarter, but Sacramento was able to weather the storm. Despite missing their primary playmaker in Fox, they still compiled 28 total team assists, a testament of their willingness to move the ball and find the open man.

Kings’ main scorer Buddy Hield, who just had 12 points in the win, expressed his joy in seeing how his team has put a premium on sharing the ball, per James Ham of NBC Sports.

“That’s what’s so fun about us -- we enjoy everybody’s success and we love that about everybody. We love to share the ball, we love to play together. That’s great for us and that’s going to help us keep growing and help us win ball games down the stretch.”

It also marked the Kings’ sixth win in the last eight games, an incredible comeback for a team who started the year by losing their first five games. They will travel to Brooklyn on Friday to go up against Kyrie Irving and the Nets.

As for the Suns, this second straight loss and their third in the last four contests. Devin Booker topscored for them with 30 points, while also grabbing 5 boards and dishing out 8 assists. Kelly Oubre Jr displayed his versatility on both ends of the floor with 20 points and 5 steals, while Mikal Bridges and Cameron Johnson both came off the bench to chip in 20 and 18 markers, respectively. The Suns will go back home on Thursday as they host the Pelicans and gun for their 8th win of the season.

The Los Angeles Lakers extended their winning streak to five games as they turned back Chris Paul and the visiting Oklahoma City Thunder with a 112-107 victory. Anthony Davis displayed his all-around brilliance as he finished with a game-high 34 points, 7 rebounds and 4 assists. The Brow also stayed active on the defensive end, compiling 4 steals and 2 blocks. LeBron James had himself another triple-double night of 25 points, 11 boards and 10 assists as he created history as the first player to put up a triple-double stat line against every team in the league.

James, who will turn 35 next month, logged in 37 heavy minutes in the win. Load management has been a trending recovery process for superstars like him, but it looks like James isn’t taking any of that. He says that he is more than ready to log in heavy minutes if his coach and his team need him to, per Harrison Faigen of the SB Nation’s Silver Screen & Roll.

“I’m with whatever, honestly. It doesn’t matter for me. I train my body. I train my mind to be able to push the limit at any time. I go into a game expecting to have to play big minutes. Obviously I know that’s not going to be the case, but that’s just how I prep my mind and my body so that we’re good for whatever.”

Dennis Schroder led the way for the Thunder with 31 points off the bench, while veteran scorer Danilo Gallinari reinforced him with 25 markers. Chris Paul had a quiet scoring night of only 4 points, but distributed 10 assists and racked up 4 steals in the loss. This was the Thunder’s 9th defeat in 14 games, and they will try to avenge their loss when they face the Lakers again on Friday.