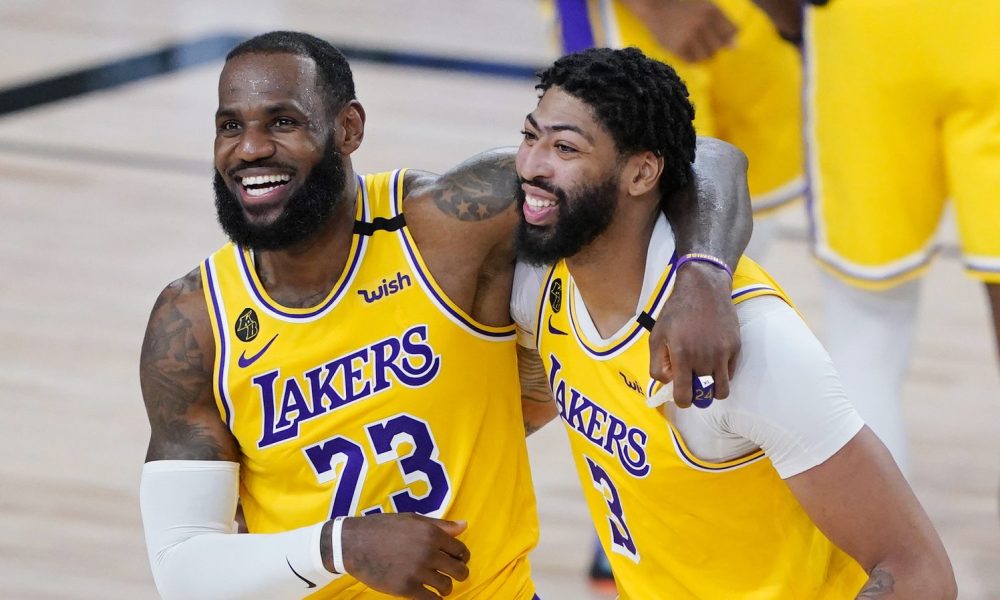 The Los Angeles Lakers will move on to the second round of the 2020 NBA Playoffs after scoring a 131-122 win over the Portland Trail Blazers in Game 5 of their first-round series on Sunday. The Lakers won the series 4-1 and will get past the first round of the playoffs for the first time since 2012.

LeBron James and Anthony Davis showed why they are arguably the deadliest duo in the league this season after dominating the Trail Blazers. James had a triple double with 36 points to go along with 10 assists and 10 rebounds, while Davis racked up 43 points on 14-for-18 shooting with four three-pointers to go along with nine rebounds and four assists for the Lakers.

The Lakers won four straight against the Blazers after losing in the series-opener. There were doubts about their ability to beat the red-hot Portland squad. James said that they expected that it won't be easy defeating the Trail Blazers, but the four-time NBA Most Valuable Player said that they were able to get better as the series progressed.

"We got better throughout the course of the series," James said via ESPN. "We knew we were coming into a series versus a hot Portland team that was playing the best basketball inside the bubble along with Phoenix. So we wanted to just come in and try to work our game, get better and better as the games went on, as the series went on. And I believe we did that."

The Lakers had a hard time closing out the series, though. Despite playing without injured superstar Damian Lillard, the Trail Blazers managed to stay within striking distance for the entire games. Portland managed to tie the game at 100 early in the fourth quarter. However, the Lakers put the clamps on the Blazers down the stretch, while James and Davis took over to hold off the Blazers, earning a ticket to the second round.

"They’re a good team," Davis said of the Blazers via Los Angeles Times. "No matter who they have out there, they’re going to compete. They didn’t get this far just to give up. And we knew that. Close-out games are already tough, but we’ve just gotta keep  fighting."

Kentavious Caldwell-Pope had another decent game for the Lakers, as he finished with 14 points on 5-for-12 shooting, including a 4-for-9 clip from beyond the arc to go along with five assists and three steals. Dwight Howard also provided a big lift off the bench with 11 points and six boards for the Lakers, who shot 54.5 percent from the field with 14 conversions from beyond the arc.

CJ McCollum, the other half of Portland's deadly backcourt duo, led the Trail Blazers with 36 points on top of seven assists and six rebounds. Carmelo Anthony had a vintage performance for Portland with 27 points on 9-for-16 shooting from the field, while Jusuf Nurkic had a double-double with 16 points and 10 boards. Gary Trent Jr. chipped in 16 points and four rebounds, while Anfernee Simons contributed 13 points and five boards.

Blazers coach Terry Stotts had nothing but praises for his team despite failing to advance to the second round. Stotts said that he had no regrets about going into the bubble, lauding the effort of the league to continue the season despite the current situation brought by the pandemic and social justice issues in the country.

"Going into the bubble, I really wanted to be a part of this, personally," Stott said via Oregon Live. "The fact that the league could pull this off in the middle of a pandemic, in the middle of social unrest (and) social injustice that’s going on. If we could pull it off, I wanted to be a part of it. This year, 2020, has been an incredible year, and this is just one part of an incredible year."

The Lakers will wait for the winner of the series between the Houston Rockets and the Oklahoma City Thunder. The Lakers are the top-seeded team in the Western Conference after finishing with a 52-19 record during the regular season.

Milwaukee Bucks Move on to Second Round

Like the Los Angeles Lakers, the top-seeded team in the Eastern Conference moved on to the second round of the playoffs. The Milwaukee Bucks earned a ticket to the East Semis with a 118-104 win over the Orlando Magic on Sunday to win the series, 4-1, inside the NBA bubble.

The win came days after the Bucks opted not to play in Game 5 on Wednesday as part of their protest following the shooting of Jacob Blake in Kenosha, Wisconsin. Bucks head coach Mike Budenholzer and Lopez said that the recent turn of events brought them closer as a team, which showed in the series-clinching win.

"You could just feel the closeness," Lopez said via ESPN. "We're still out there on the floor taking care of our mission and what we want to achieve, but I think being through all this brought us together even more.

Trying to end racial injustice and end racism and make this world a better place is still more important than anything we did today," Budenholzer said. "Our players, their professionalism and their ability to come out and play today, it's what we expect from each other, but it's still hard to do."

Nikola Vucevic ended his season with another solid performance, tallying 22 points and 15 rebounds on top of five assists. In five games against the Bucks, the 29-year-old All-Star center averaged 28.0 points, 11.0 rebounds, and 4.0 assists for the Magic. Despite losing in the first round for the second-straight year, Vucevic believes that they made a lot of progress this year, which they can build on for next season.

"We were better this year," Vucevic said of the Magic, who played without star forward Aaron Gordon and Michael Carter-Williams in the entire series due to injuries. "Obviously, there is still a lot of work to do. We exited again in the first round. There are things that we need to get better at and stuff we need to improve on if we want to move forward. I’m still very proud of my teammates, very proud of all we did, fighting through a lot of ups and downs this season, a lot of injuries, a lot of adversity. I thought we put up a good fight."

With the win, the Bucks arranged a showdown with the fourth-seeded Miami Heat in the Eastern Conference semifinals. Miami advanced to the second round after sweeping the Indiana Pacers in their best-of-seven playoff series.

The Houston Rockets moved a win away from advancing to the second round of the playoffs. The Rockets scored a 114-80 blowout win over the Oklahoma City Thunder in Game 5 on Saturday to take a 3-2 lead in their first-round series in Orlando, Florida.

James Harden was on target with 31 points on 11-for-15 shooting with four three-pointers to go along with five assists and two rebounds. Robert Covington added 22 points and seven rebounds, while Eric Gordon posted 20 points on top of four rebounds and two steals for the Rockets.

Russell Westbrook played his first game in this year's playoff. The superstar point guard, who missed the first four games of the series, finished with just seven points and seven assists, but Rockets head coach Mike D'Antoni said that the former MVP gave them the spark that they needed.

"We've missed him the first four games. Now we've got him, and let's see what we can do," D'Antoni said of Westbrook via ESPN. "I knew he was going to be a little rusty,  but he gave us a nice little spark."

Things got heated for both teams when Thunder guard Dennis Schroder hit Rockets forward PJ Tucker in the groin in the third period. Tucker was not too pleased with the hit and head-butted Schroder. Both players were ejected but escaped suspension for Game 6. Schroder led OKC with 19 points off the bench before the ejection.

The Rockets will look to close out the series on Monday to earn a date with the Los Angeles Lakers in the second round. D'Antoni is not expecting a walk in the park in Game 6, knowing that both teams will go all out, particularly the Thunder, who will be desperate to extend the series into a decider.