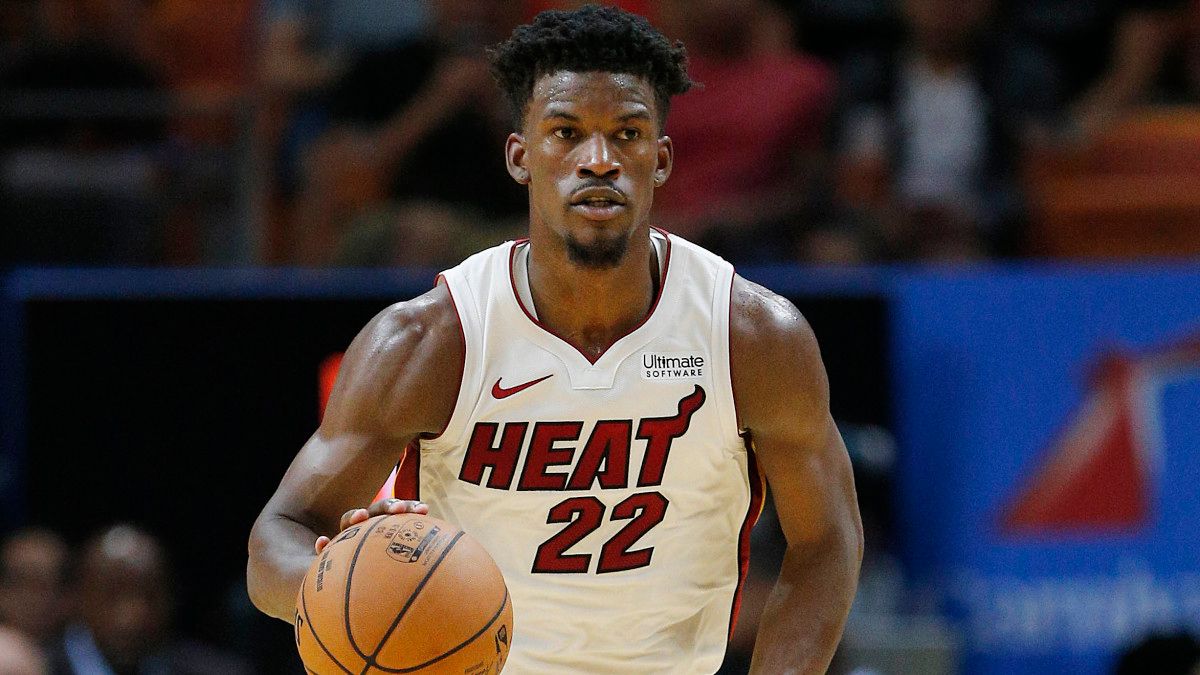 Heat flex muscles in 29-point beating of the Rockets

The Miami Heat continued their winning ways with a resounding 129-100 victory over James Harden and the Houston Rockets. Superstar forward Jimmy Butler didn’t score a lot, but he did a bit of everything for the streaking Heat squad. The 30-year old star put up an all-around stat line of 18 points, 7 rebounds, 9 assists and 4 steals. He was the anchor of the Heat’s incredible first quarter performance as they held a 46-14 lead after the opening period. Miami head coach Erik Spoelstra had heaps of praises for Butler, per Anthony Chiang of the Miami Herald.

Butler also got plenty of help from his teammates. The Heat saw six of their players tally double-digit points. Sharpshooting swingman Duncan Robinson topscored with 23 points built on seven three-pointers, while Meyers Leonard chipped in 21 markers. Veteran combo forward James Johnson played his first game of the season and netted 17 points, 4 boards and 3 assists. Goran Dragic came up with 15 markers, while rookie shooting guard Tyler Herro continued his fine play as he showed his versatility with 12 points, 7 rebounds and 7 assists.

The Heat’s fluid offense was a product of their unselfish play. They totalled 38 assists as a team, doubling the Rockets’ total of 19. Their defense was still on-point as they stole the ball 14 times, while also limiting Houston to a measly 29% clip from three-point territory. Butler, who led the game in assists with 9 dishes, points out to their pin-point passing as the most important factor of their success.

“It comes down to sharing the ball. We share the ball. Somebody is open, they’re always going to get the ball. Nobody is complaining about the shots that they take. We’re in it together.”

Harden led the way for the Rockets with 29 points, while Chris Clemons came off the bench to pour in 16 markers. Russell Westbrook struggled mightily in the loss as he only came up with 10 points, while turning the ball over seven times. The Rockets will try to improve their 2-3 record with a game against prized rookie Ja Morant and the Memphis Grizzlies. The Heat will face Nikola Jokic and the Denver Nuggets on Tuesday.

After losing their first five games of the season, the Sacramento Kings are now on a mini-winning streak as they defeated the New York Knicks, 113-92. De’Aaron Fox led the charge for the Kings with 24 points and 6 assists, while his backcourt partner Buddy Hield poured in five triples to tally 22 total points. All of the Kings’ starters showed up in the win with double-digit scoring. Harrison Barnes contributed 19 markers, while Richaun Holmes and Nemanja Bjelica chipped in 14 and 10 points, respectively.

Fox emphasized how “fantastic” their defensive performance was in this much-needed win, per Brian Mahoney of the Associated Press.

"I think it was our defense. I think obviously you have to put the ball in the basket, but the way we've performed I think the last three or four games have been fantastic."

Indeed, Sacramento’s defense was on-point in the win as they closed out well on the Knicks’ shooters and limited them to a lowly 25% clip from beyond the arc. They won the rebounding battle (49-39), and also shared the ball with 25 total assists.

Veteran scoring forward Marcus Morris had a game-high 28 points in the Knicks’ sixth loss of the year. Rookie RJ Barrett had himself another outstanding game of 22 points and 5 boards, while Allonzo Trier contributed 11 markers off the bench. Knicks head coach David Fizdale was criticized by some fans for experimenting with different line-ups at the start of the season. However, Morris leaped to his coach’s defense and reiterated that Fizdale has been very “transparent” with the team, per Stefan Bondy of the New York Daily News.

“It’s ten new guys, ten new guys on this team. And we’ve played seven games. That don’t have nothing to do with basketball. Everybody knows how to play basketball. It’s not like it’s a game-day decision (where Fizdale changes the starting lineup). We go and practice and we practice with the five that start. So it’s not like it’s just up in the air and guys don’t know what’s going on. He’s very transparent. He’s telling us the reason why he’s trying to experiment and see how it goes.”

The Knicks will try to bounce back from the loss when they fly to Detroit to face Andre Drummond and the Pistons on Wednesday. Meanwhile, the Kings visit Canada to take on Pascal Siakam and the Raptors in their next assignment.

The Los Angeles Lakers banked on another versatile performance from LeBron James as they hacked out a 103-96 victory over the San Antonio Spurs. James finished with 21 points, 11 rebounds and 13 assists, while being the team’s anchor on the defensive end. Anthony Davis again dominated the paint as he put up 25 points, 11 boards and 4 blocks. Shooting guards Avery Bradley and Kentavious Caldwell-Pope contributed 16 and 14 points, respectively.

But the Laker who really grabbed the spotlight in the win was Dwight Howard. Howard played his best game for the Lakers as he finished with a double-double performance of 14 points and 13 boards, while making all of his seven attempts from the field. In an interview with ESPN’s Dave McMenamin, Howard asserted that his purpose in this team is to do everything that they need him to do, most especially on defense.

The Lakers, who are currently the best team in the league in terms of defensive efficiency, held the Spurs to only six triples and an overall 39% clip from the field. They also forced the Gregg Popovich-led squad to commit 17 turnovers.

Dejounte Murray turned in a double-double outing of 18 points and 11 boards to lead the way for the losing team. Rudy Gay came off the bench to pour in 16 points and 10 boards, while Bryn Forbes chipped in 12 markers. However, the team’s usual go-to-scorers DeMar DeRozan and LaMarcus Aldridge were quiet on offense and only came up with 14 and 8 points, respectively.