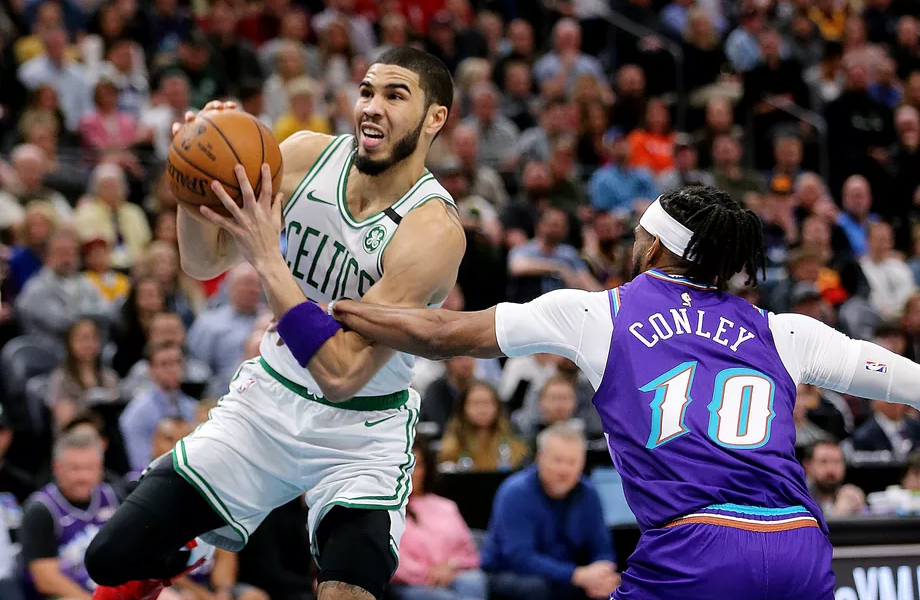 The Boston Celtics again relied on a total team effort on offense as they turned back the Utah Jazz, 114-103. First-time All-Star forward Jayson Tatum led the charge for the Celtics with a double-double performance of 33 points and 11 rebounds, while Jaylen Brown chipped in 20 markers and three hits from the three-point line. All five of Boston’s starters scored in double digits. Defensive ace Marcus Smart showed his versatility as he tallied 17 points, 9 assists and 3 steals. Daniel Theis and Gordon Hayward contributed 16 and 12 markers respectively as the Celtics won their second game in a row.

The Celtics set the tone early in the first quarter as they held the Jazz to just 15 total points. But Utah’s superstar guard Donovan Mitchell brought the team back to life in the second period, going back and forth with Tatum to chop Boston’s lead to just two points at halftime. The visiting team again clamped down on defense in the fourth quarter as the Celtics came away with their 41stvictory of the season.

It also marked another return trip to Utah for ex-Jazz Gordon Hayward. The Celtics all-around swingman was booed by the home crowd every single time he touched the ball on offense. The 6-foot-7 former All-Star spent most of his career in Utah, before joining his college head coach Brad Stevens in Boston during the 2017 offseason.

That break-up left a sour taste on Jazz fans as they thought that Hayward would lead their team brimming with young talent like Mitchell and Rudy Gobert. However, Celtics players believe that Hayward has already moved on from it and the animosity is not affecting him anymore. Brown emphasized on this matter, while also being satisfied on this very tough win, as per Tom Westerholm of MassLive.

“That’s a big win on a back-to-back in a tough environment against a team that was desperate for a win. It don’t get too much better than that. So we just have to keep building on it, man. Just keep getting better. Just keep preparing to win every game. And just building good habits getting ready for the playoffs.

Mitchell topscored for Utah with a game-high 37 markers, and starting point guard Mike Conley chipped in five triples on his way to 15 points. Gobert pulled down nine rebounds and blocked two shots, but only shot the ball four times. Although he made all his attempts, it could be beneficial for the Jazz if they feed Gobert more in their offensive sets. Royce O’Neal produced 14 markers as a starter, replacing lefty sharpshooter Joe Ingles in the starting line-up.

Despite the negative outcome, Jazz head coach Quin Snyder still thought that his players gave their best efforts in this loss, as per Matt Payne of utahjazz.com.

"It's not the result we wanted, obviously, but I thought we gave a really pure, good effort, and you could feel that watching the game. I thought we did a good job playing through it when we weren't making shots. Our defensive effort and our energy stayed  at a good level. I felt differently about tonight's game compared to the games we've played the last couple days. It's not a moral victory in that sense at all, but our team is going to keep working and finding it and keep getting better from where we were    two nights ago."

Snyder also reiterated that it all boiled down to which team was more fortunate to make more shots in regulation. The loss drops the Jazz to a 36-22 record, sitting on a two-way tie with the Oklahoma City Thunder for the fifth spot in the Western Conference. The Dallas Mavericks are also closing in as they are just a full game behind the Jazz and the Thunder in the standings.

Kristaps and Luka combine for 54 to hold off Spurs

The Dallas Mavericks stormed right out the gates after the first buzzer as they hacked out an important 109-103 victory over the San Antonio Spurs. Sweet-shooting big man Kristaps Porzingis imposed his presence on both ends of the floor as he tallied 28 points, 12 rebounds, 2 steals and 3 blocks, including four hits from beyond the arc. Luka Doncic came through with another impressive triple-double stat line of 26 points, 10 rebounds and 14 assists. Tim Hardaway Jr and Dorian Finney-Smith chipped in 17 and 14 markers, respectively.

This was a rousing start to their four-game road trip that will also pit them against the Miami Heat, the Minnesota Timberwolves and the Chicago Bulls. The Mavericks started out very strong in the first quarter, building an early 16-point lead as their defense held the Spurs to just 20 points in that period. The home team made things interesting as they chipped away on the lead, but the Mavericks’ excellent opening salvo created enough cushion to hold back the Spurs.

It was again another dynamic performance for Dallas’ star tandem. The 7-foot-3 Porzingis couldn’t help but express his excitement on how his chemistry with Luka has grown this season, as per the Associated Press.

“It’s just experience playing with each other and getting to know each other and little details about the game. I feel like also me playing at the five now more I’m more involved with him in the pick and rolls and not standing around on the perimeter as much. I’m more involved rolling, popping (and) then I have the option to pick what I want to do and play off of Luka. We have a better rhythm now.”

The Spurs played without the services of their injured star big man LaMarcus Aldridge. Aldridge sustained a minor shoulder injury that will keep him out on a day-to-day basis. With Aldridge sidelined, the Spurs employed a very small line-up with stretch power forward Trey Lyles manning the center position.

DeMar DeRozan led the way for the Spurs as he stuffed the stat sheet with his 27 points, 8 boards and 9 dimes. Veteran sharpshooter Marco Belinelli came off the bench to contribute 14 points and 8 rebounds, while Lonnie Walker IV chipped 12 markers and 3 rejections.

After the game, head coach Gregg Popovich acknowledged that they had the wrong game plan to counter the Mavericks’ attack but still praised his players for not giving up despite falling behind by 16 in the opening period.

“I think the game plan that I came out with was poor, and they took advantage of it in the first quarter. And we turned it over nine times in the first half. So, that got us in a hole, but you know they’re a hell of a team and I’m really proud of the effort and stick-to-itiveness.”

With this loss, the Spurs are now sporting a 24-33 record, dropping to the 12thspot in the Western Conference. They will try to bounce back from this tough night when they host the high-flying Aaron Gordon and the Orlando Magic on Saturday. The Spurs will then start their March assignments with a back-to-back schedule against the Indiana Pacers followed by a road game against the Charlotte Hornets.