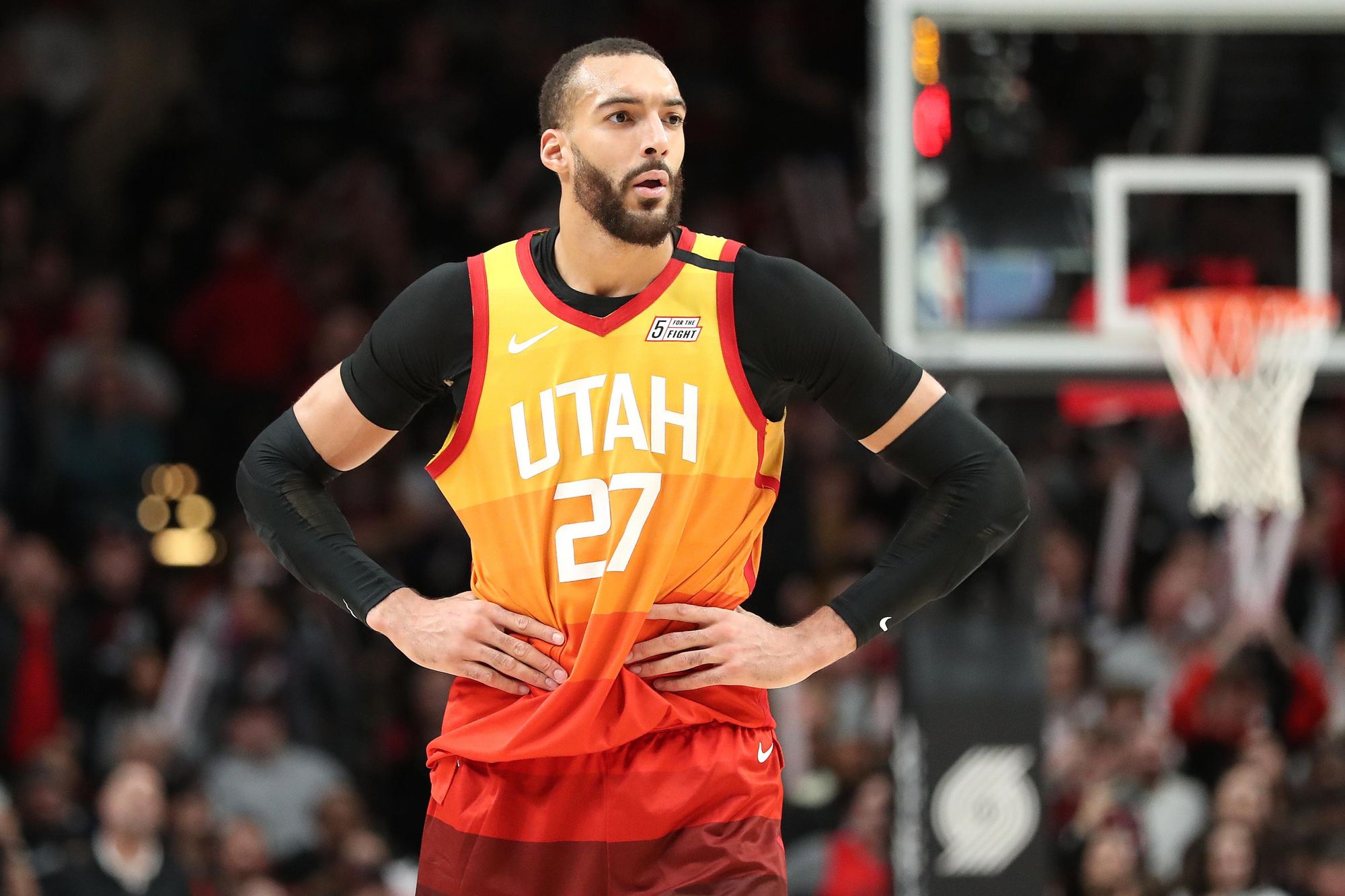 Gobert still holding the fort for the Jazz

Much has been said and criticized when the Utah Jazz gave Rudy Gobert a multi-year, supermax contract extension, but it is also true that the French big man is still doing wonders for his team. He is still putting up the nightly double-double stat lines on points and rebounds, while maintaining his role as the Jazz’ undisputed anchor on the defensive end of the floor.

Gobert, who is coming off the first All-Star appearance of his productive career, is norming tremendous numbers of 12.1 points, 13.5 rebounds, 1.4 assists and 2.7 blocks per contest. His scoring may have dipped, but Gobert is still averaging an excellent 60%  overall clip from the field. That is still an outstanding percentage for any player.

Most importantly, Gobert is still one of the best defensive stalwarts in the whole league. Being big man in the league means that it will get really difficult for you to get in the middle of multiple switches. Basketball has become a positionless type of game where teams mostly employ switch-heavy defensive schemes especially when opponents field in a small-ball line-up.

As per Taylor Griffin of SB Nation’s SLC Dunk, Gobert is not just thriving in these circumstances but he is also doing an excellent job of wreaking havoc and hindering Utah’s opponents from executing a smooth and flowing half-court set.

“Gobert has always been the king of these advanced defense metrics, and  this season is no exception. In terms of ranks in the league, he               currently has the 2nd best defensive rating, 2nd most defensive win  shares, 2nd most blocks, and 3rd most rebounds in the league. Looking at        these numbers side by side it’s easy to see Gobert’s case for yet another        Defensive Player of the Year, but a huge part of that is going to depend       on the Jazz defense as a unit and if they can climb up the ranks by the        end of the season.

Watching Gobert defend is one of my favorite things about the Utah Jazz The way Rudy impacts games is incredibly unique, and even in a three-   point shooting league, Gobzilla changes the game when he’s on the floor.     It doesn’t matter if it’s Giannis, Zion, or the entire Spurs roster, Gobert is locking down the paint.”

So it is no coincidence that the Jazz are currently 3rd in limiting opponent points per game, 1st in the rebounding department, and 2ndin opponent field goal percentage. There is also the fact that the Jazz are also 2nd in opponent three-point percentage, which means that even the seven-footer Gobert’s presence doesn’t limit the Jazz’ ability to close out on the opposing team’s best long range shooters.

Moreover, it is Gobert’s budding partnership with co-star Donovan Mitchell that is also doing wonders for the Jazz this season. Mitchell is steadily rising up the ranks and could even be considered as a darkhorse contender for the MVP award this year.

Gobert’s relationship with Mitchell was tarnished when the former obviously didn’t take the COVID-19 danger seriously, leading to him being tested positive for the virus. That ultimately led to the NBA hiatus that forced the league to shut down games for several months. But the great thing about this is that it helped Gobert to be more mature in his decisions, and the setback became a testing ground for Gobert and Mitchell’s resilience on and off the court.

As per Royce Young of the ESPN, Mitchell confessed that his partnership with Gobert took some time off after what happened the March of last year. But Mitchell also pointed out that everything is of the past now, and that he and Gobert are just focused on racking up the wins for the Utah Jazz.

“Mitchell admitted it took him "a while to cool off," and the two went an     extended period of time without talking. When the NBA resumed in the    Florida bubble, Gobert and Mitchell were forced to confront the issue and repair the fracture. They realigned with a common goal as the unifier: winning.

Monday's game was fitting for a lot of reasons, but to have Mitchell hit       the go-ahead shot and Gobert produce the winning stop showcased the      formula the Jazz have built their hopes on. Snyder referenced the growth the team experienced from that night in March, but it runs deeper than winning a basketball game almost 10 months later.”

Even though the Jazz did not make any drastic moves last offseason, they are still in the hunt for the top spot in the Western Conference. The Jazz are just trailing LeBron James and the Los Angeles Lakers for that spot, as they are currently sporting an excellent record of 13 wins against only four defeats this season.

Gobert is still the NBA’s best defender, no matter what other people try to point out against him. As per Andy Larsen of The Salt Lake Tribune, Gobert reiterated that he actually has more room to grow on that end of the floor. But the important thing for him to do right now is to communicate well with his teammates, balance out how to be smart while being aggressive, and just focus all his energy on holding down the fort and protecting the rim for the Jazz.

“Defensively for me, I think it was a really good road trip, maybe if you       take out the Brooklyn game [when the Jazz allowed 130 points]. I think        my focus as the leader defensively has been good. There’s always room to grow, but I was pretty happy in the way I was communicating with my teammates and and the way I was a little more aggressive defensively.

There’s been some games when guys will drive to the rim and I wouldn’t   necessarily go and try to block the shots — I would just try to be there  just in case they missed it,” Gobert said. “But I realized that I’m at a  point where I can be aggressive and at the same time be smart. When I play that way defensively, it changes the whole game.”

Many people are still overlooking Gobert’s impact for the Jazz’ defense. It is no joke that he already won two Defensive Player of the Year awards in his career, and there is still a lot of time for him to continue chasing more. Gobert is just 28 years of age, and there is no doubt that he still has several more seasons of peak years left in his tank.

Larsen also detailed out just how effective Gobert has been on the defensive end by showing a metric that sees the Jazz big man way ahead of the league’s other elite defenders. Even though Gobert is not that efficient as he can be on offense, his tremendous value on the defensive end steadily makes up for his weaknesses in terms of scoring the ball.

The Jazz will be going up against Luka Doncic the Dallas Mavericks in a mini two-game series, before traveling on the road to match up against Nikola Jokic and the Denver Nuggets. The Jazz are now riding an impressive nine-game winning streak, a span that saw them beat a number of playoff contending teams like the Milwaukee Bucks, the Nuggets, the New Orleans Pelicans and the Golden State Warriors.