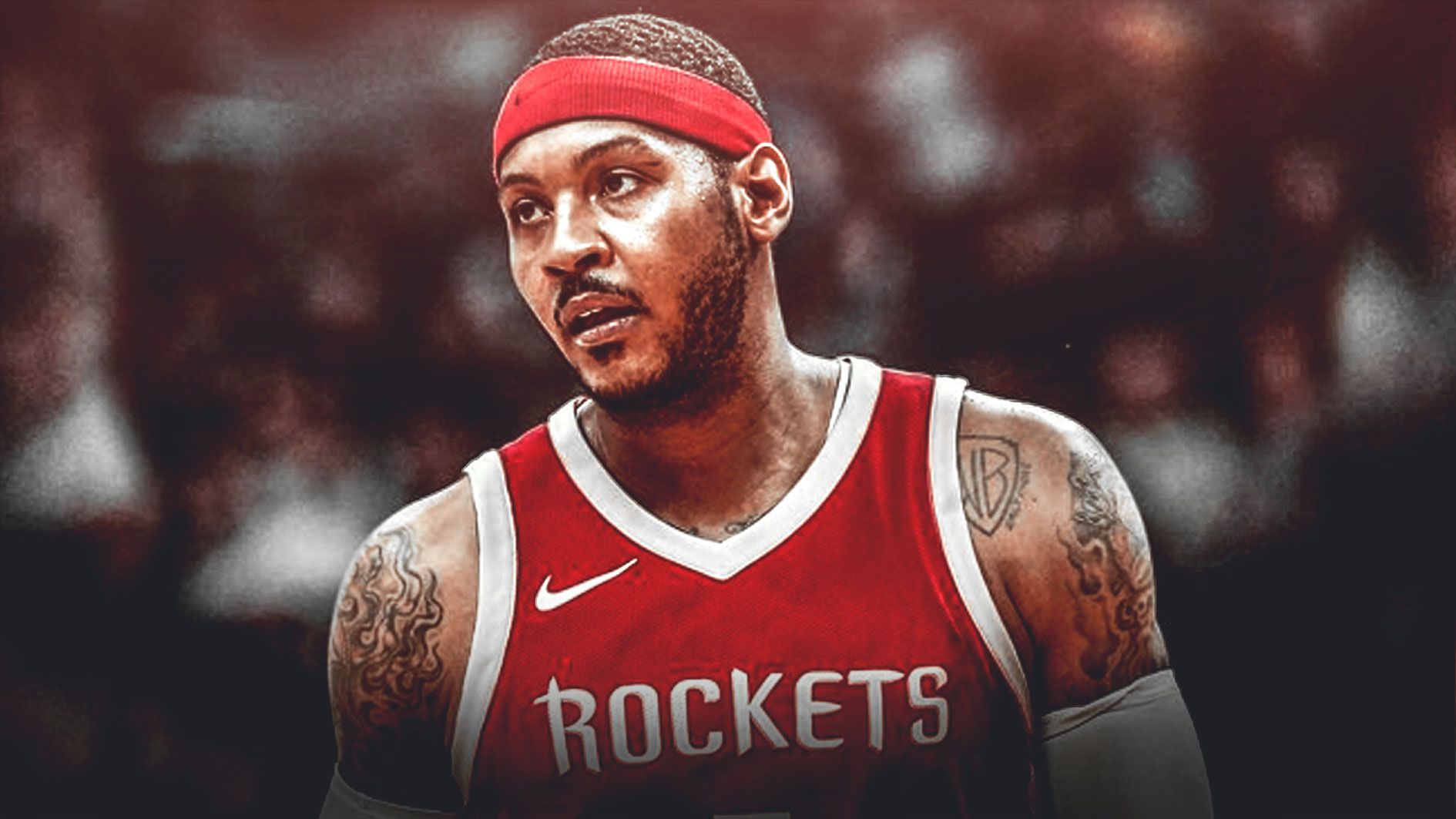 The 2019 free agency market has already sold its prized commodities but the shopping craze is still far from over. August is usually the time when players who are raring to prove they still belong in the league are left in the market - may it be veterans who people look as already washed up, or young unproven players trying to have another shot at testing their mettle in the big league. It’s safe to say that the market still has those kind of players under its sleeves, and we may see a lot of playoff-contending teams making moves to add more depth to their roster.

It has been just a couple of years ago that the 10-time All-Star was dropping 22.4 points per game for the New York Knicks. He was traded to the Oklahoma City Thunder after that season, forming what should have been a formidable trio with stars Russell Westbrook and Paul George. But Melo would turn in a disappointing season, scoring only 16.2 points per contest, the lowest of his career at that time. Of course, it was the first time in his career that he wasn’t the main bucket getter as Westbrook and George had more time with the ball on their hands. However, that wasn’t the worse part of his short stint in Oklahoma City. Despite them being highly-expected to make a deep postseason run, the Thunder would lose to Donovan Mitchell and the Utah Jazz in the opening round. Anthony averaged a measly stat line of 11.8 points, including only 21% from beyond the arc during that series.

Then Anthony would move on to play a grand total of 10 games for the Houston Rockets the following season, and the rest is history. After being axed from the Rockets a couple of weeks after that season started, the 35-year old vet is still out of a job. But that doesn’t mean that the NBA isn’t closing the doors on him. Despite his weaknesses on defense, Anthony can still score with the best of them. There are a number of teams out there who are in dire need for a scorer, especially one who can spark the second unit. Anthony has reiterated during a recent interview with ESPN’s Stephen A. Smith that he is willing to take a lesser role, which means that he is finally okay with an off-the-bench role.

Former NBA player and current analyst and co-host on SiriusXMNBA Brian Scalabrine says that the Miami Heat could be a potential destination for the scoring forward.

“Miami has four roster spots. And, they’ve got a lot of guys on low guarantees. Right there, there’s a need. If they want to do the development thing with young guys, I get it. But, that’s really not Miami’s forte. They like taking an older guy, like a Carmelo Anthony and saying ‘With our good culture, we’re going to turn him into what we feel like.’ I think Miami’s interesting … and because they’re lying in the weeds and you haven’t talk about it, I actually think there’s some traction there.”

The Heat will be entering the first season of the post-Dwyane Wade era, and they started things off the right way by acquiring a two-way superstar in Jimmy Butler. However, the Heat still lags behind perennial contenders in the Eastern Conference, and taking a chance on Anthony could be a low-risk, high-reward move. But this could be a very tricky thing to do for the Heat. With a bunch of massive contracts on their salary book, the Heat doesn’t have financial flexibility to sign Anthony. They have to unload some contracts just to accommodate Anthony, and that should be a very difficult move to pull off.

It has also been reported that Anthony’s camp has reached out to the Lakers and the Clippers.

It’s really a mystery why this veteran ball-handling wonder is still without a team at this point of the offseason. Crawford’s averages of 7.9 points and 3.6 assists per contest for the Phoenix Suns may be his lowest production since his sophomore year in 2002, but that doesn’t mean that he is all washed up. Crawford was still able to put up double-digit points in 21 games last season, including a strong finishing kick that saw him rack up 28 points against the New Orleans Pelicans, 27 points against the Houston Rockets and a stellar 51-point performance during the Suns’ season finale against the Dallas Mavericks. Crawford made history that night, becoming the oldest player to score more than 50 points in a game.

Like Anthony, Crawford has his weaknesses on defense. It should be the main reason why teams are passing up on the 39-year old combo guard. Still, the 6-foot-5 scorer should be able to log in quality minutes off the bench and even mentor any team’s young talented guards. Crawford sat down with Jeremy Mills on The Jeremy Mills podcast and points out that he remains optimistic of his chances of playing next season.

“I don’t think it’ll happen anytime soon, but I think it will happen. So, it’s just a matter of when. Last year prepared me for this year.”

Indeed, a lot of teams will come calling Crawford’s number even after the season begins. Playoff-contending teams usually look for veterans during mid-way through the season especially when unfortunate injuries happen to their top players. If we won’t hear of a team acquiring Crawford before the 2019-20 season begins, then it will be a sure thing that his name will resurface in March or after the February trade deadline when teams gauge the free agency market for more quality players.

Jeremy Lin literally has had a roller coaster of a career in the NBA. The scoring point guard was undrafted in 2010, but the Golden State Warriors took a chance on him by signing him for the season. He played 29 games for the Warriors that year, but only averaged 9.8 minutes per game, usually seeing action on the court during garbage time. But the “Linsanity” happened when Lin played for the New York Knicks the following year, establishing his name as a capable point guard in the league.

Lin would bounce from team to team after that year, playing for the Rockets, the Lakers, and the Hornets. His most productive year came during the 2016-17 season when he impressed with an all-around stat line of 14.5 points, 3.8 rebounds and 5.1 assists per contest for the Brooklyn Nets. The 6-foot-3 Harvard University product was poised to have a major career year the next season but he suffered a season-ending knee injury during the Nets’ first regular season game.

Now just a little over a month after winning a championship with the Toronto Raptors, Lin finds himself with no takers, citing his current state as the “rock bottom” of his career.

"But rock bottom just seems to keep getting more and more rock bottom for me. So, free agency has been tough. Because I feel like in some ways the NBA's kind of given up on me.

Lin only appeared in eight games during the Raptors’ successful title run. He may have gotten his first championship ring, but Lin believes he didn’t earn it, considering how he was a non-factor in that entire postseason. Lin is only 30 years old, and has a couple of years left before he enters the twilight of his career. He can still score, set up plays for his teammates, and play decent defense on the other end of the floor. But even if Lin doesn’t take a job at the NBA next season, there are still a lot of opportunities for him overseas. Sportando’s Emiliano Carchia reports that Euroleague’s CSKA Moscow were very interested in signing Lin.

However, it turned out that the team signed Baker instead. Carchia also reported that CSKA Moscow were actually in negotiations with Lin, but it fell through when the latter decided that he will wait for offers from NBA teams.

“The deal between Jeremy Lin & CSKA Moscow falls apart, I am told. The free agent guard turned down CSKA Moscow's proposal because he is not interested, at least for now, to sign in Europe. Lin awaits for NBA offer to come but if nothing happens, I wouldn't rule out China for him.”

It could have been intriguing seeing Lin don international threads for the first time, but we still have to wait for that to be a reality. Despite his deal with CSKA Moscow falling through, it’s still a positive thing that Lin’s talent is not overlooked.