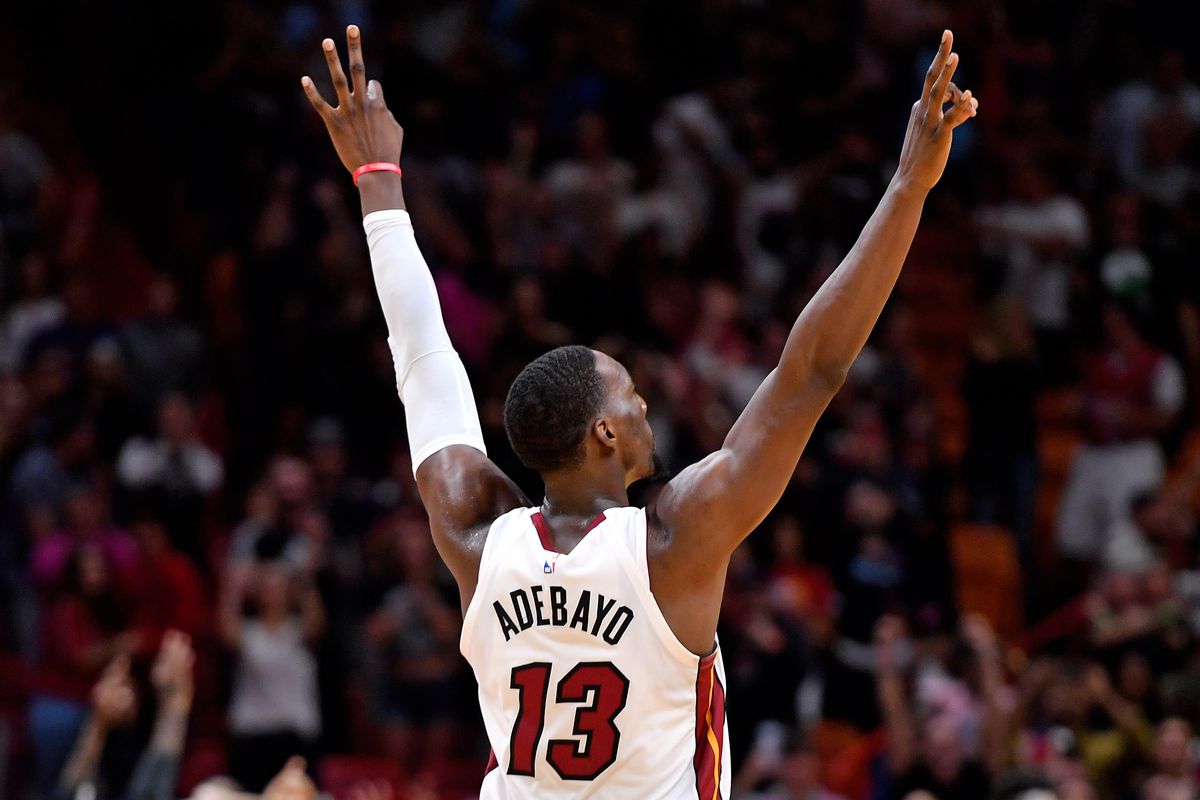 Right in the first year of the Miami Heat’s post-Dwyane Wade era, they have already found a budding superstar right inside their camp. Third-year big man Bam Adebayo has grown into an All-Star this season, posting all-around numbers of 16.2 points, 10.5 rebounds, 5.1 assists, 1.2 steals and 1.3 blocks per contest. Adebayo’s elite versatility on both offense and defense have him pegged as one of the best young budding superstars we have in the NBA.

The 22-year old center is also looking at a potential lucrative offseason as he is now eligible to sign a rookie-scale extension with the Heat. Of course, Adebayo can still forego an extension in the offseason so that he could become a restricted free agent in the summer of 2021. Doing that will allow him to see his value in the free agency market as other teams will be allowed to put out max offer sheets that the Heat front office has to match if they are adamant on keeping their 6-foot-9 Swiss Knife.

But during an Instagram Live session with Ashley Nicole of iHeartRadio, Adebayo reiterated that it is his ultimate desire to be a “Heat Lifer”, just like Wade and veteran teammate Udonis Haslem. Bam also emphasized that he wants to bring more championships to the basketball city of Miami, and earn respect on and off the court.

“Right now, my mindset is yes because I can’t dictate the future. If I could, I would like to stay here like [Udonis Haslem]. But you never know what happens in the future. Everybody just knew D-Wade was a lifer until he left because of situational reasons. You never know. But for me, I feel like I am. I feel like I would want to be a part of [one] organization like UD did just because I look up to UD.

I want to know what it feels like to win a championship. You hear the fans talk about it. You see when D-Wade walks in, the love he gets because he brought the city three championships. Him and UD, everywhere they go in Miami, somebody is stopping to take a picture because they got so much respect with what they’ve done on the court. I want to win. I want that type of love.”

Adebayo’s rise to a first-time All-Star this season also garnered him a solid candidacy for the Most Improved Player of the Year award. In his first two years with the Heat, he mainly served as a back-up for double-double machine and rim protector Hassan Whiteside, who is now with the Portland Trail Blazers after being swapped for sweet-shooting center Meyers Leonard.

Despite not logging in full-time minutes during that span, his skills level and mobility caught the attention of head coach Erik Spoelstra. Mid-way through last season, Spoelstra would field him in during the closing minutes. Adebayo would then start in the place of Whiteside in the second half of the year. This trend drew the ire of the disgruntled Whiteside, who would often voice out his belief that his double-double averages should be enough to earn him more playing time.

But Adebayo’s ability to switch onto guards in the defense and then keep up with their pace has more value in today’s small-ball, pace-and-space type of basketball. Whiteside may be the better shot-blocker, but there’s no doubt that Adebayo possesses better, smarter defensive instincts. Then there is also his versatility on offense, which has been a focal point for how the Heat run their plays.

“Dwyane came in, he was a no-nonsense guy, he went to work and he became a great player. And he had an attitude, and a competitiveness and killer instinct. Besides the talent, but he had this attitude that was above and beyond and I think that’s what Bam is.

Bam possesses this attitude about doing it the right way and doing it every day. He is a pleasure to coach and I think Spo (Erik Spoesltra) has looked at him with so much  respect that he has put him in a position to be successful, and Bam has shown right back to coach that, ‘I really appreciate your level of trust in me and I’m gonna deliver something for you big time.”

This tremendous work ethic has also injected a high boost of confidence in Adebayo’s game. He said that the Heat has a strong chance of beating Giannis Antetokounmpo and the league-leading Milwaukee Bucks should they meet in the playoffs. The Heat are currently sitting on the fourth spot in the Eastern Conference, so both teams can have a potential match-up in the semi-finals. Adebayo’s length, strength and lateral quickness make him one of the defenders with the strongest opportunity to contain the Greek Freak.

Coming off a very bumpy year that saw them put away an angered star and a head coach, the Minnesota Timberwolves are indeed headed to the right direction after making great personnel moves this season. They may have secured a long-term contract with main star Karl-Anthony Towns, but there’s no doubt that they still want to make him happier by providing him a co-star and a quality supporting cast.

After missing out on signing D’Angelo Russell last summer, they successfully manufactured a trade deal to acquire him while also dumping Andrew Wiggins’ hefty contract to the Golden State Warriors. Furthermore, they also landed young, excellent 3-and-D swingman Malik Beasley in a separate trade. Beasley is one of the league’s up-and-coming perimeter players, having played an important role in the Denver Nuggets’ rise to prominence in the past couple of seasons.

Most importantly, it has also become apparent that Beasley is a perfect fit for the Wolves’ team system. In the 14 games that he played for his new team, the two-way shooting guard is norming a career-highs of 20.7 points, 5.1 rebounds, 1.9 assists and a spectacular 43% clip from the three-point line.

With that said, Beasley is also entering restricted free agency after this season. It is an important decision for the Wolves front office to take, but all signs point towards a highly-likely extended partnership between the two camps. As per Dane Moore of the Zone Coverage, team president of basketball operations Gersson Rosas emphasized that the organization believes Beasley complements Towns and Russell.

“Malik has played in the league for four years. We’re big fans of Malik. We paid a very, very strong premium to get him here in Minnesota. But we’re excited. I think the small sample size we saw with him with the Minnesota Timberwolves showed his potential.

We’ve got a young group of guys that are around the ages of 22 to 26. His work ethic; his dedication; the taste of success in Denver; and now, he’s got a bigger platform to impact the winning at a higher level. He’s got a great couple of teammates in D’Angelo and KAT that complement each other well. So we’re excited. We’re excited about what the future holds.”

Selected 19th overall during the 2016 NBA Draft, Beasley logged in only single-digit playing time in his first two seasons. But it was in his third year that the 23-year old combo wing has realized his potential as a shooter and as a defender. Beasley was often appointed by the Nuggets as their primary stopper against other teams’ best perimeter players, and he has thrived in it.

Beasley emphasized that if the Wolves want to take the next step, they have to put in the work on the defensive end. He also went on to say that his priority is to become a better defender and improve his instincts on that facet of his overall skill set.

“It definitely takes chemistry, familiarity and going over our principles on the defensive end. Also, it’s a mental mindset, I believe, on the defensive end. I have to make sure me and the guys are really ready to defend every night. This is not about offense. We create offense for ourselves, we just got to defend. For me, I’ve been trying  to watch film on defensive guys.

How I can improve a lot, most of that is on the defensive end. I have great athletic  ability to do the things I need to do. I feel like, for me, it’s more mental…”

Along with Beasley, the Wolves also need to make a decision if they want to retain stretch big man Juancho Hernangomez. They landed the Spanish power forward in that same four-team trade deal that netted them Beasley’s services.