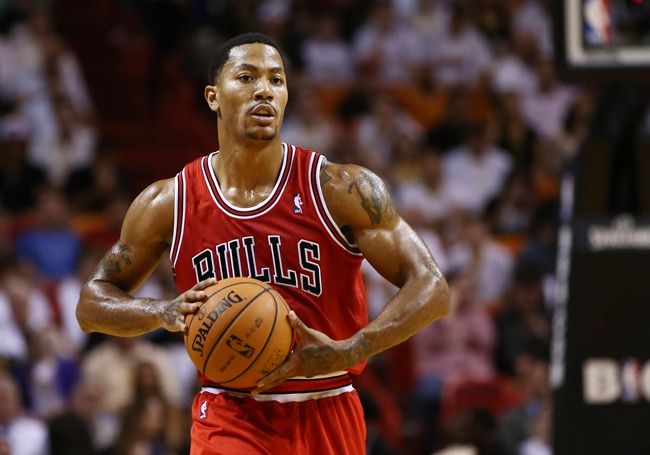 Bulls looking to improve point guard depth in the summer

One of the lottery-bound NBA teams in this year’s draft, the Chicago Bulls have the golden opportunity to add another elite talent to their young roster. With Zach LaVine, Otto Porter, Lauri Markkanen and Wendell Carter Jr. already locking up their respective positions, it is highly-possible that the Bulls would want an excellent point guard to complement the team’s outstanding perimeter scorers.

Murray State’s Ja Morant may be the best point guard prospect in the upcoming draft. But as of posting time, there are four teams that are below the Bulls in this year’s standings. It could mean that Morant will be off the board when the Bulls take their pick, forcing the team to just nab the best talent available. Chicago then could opt to look into the free agency class for their point general, and K.C. Johnson of the Chicago Tribune says that Minnesota Timberwolves combo guard Derrick Rose is a possibility.

“I wrote a column in late January advocating for this move that engendered plenty of reaction. My sense after writing the piece was that it wasn’t out of the question. Since then, though Rose has endured more injuries, which would make this less of a  possibility. There are other options in Ricky Rubio, Darren Collison and Patrick  Beverley.”

Rose is riding a resurgence in his career this year, posting outstanding numbers of 18.0 points, 4.3 assists and 2.7 rebounds per game. He is currently recovering from an elbow surgery that will sideline him for the remainder of the season, but he is expected to be ready come training camp next season.

Still, the Bulls are expected to field starting playmaker Kris Dunn next season. Dunn is averaging 11.3 points, 6.0 assists and 4.1 boards per game, but adding a veteran court general to the team should be helpful in improving their roster depth.

Coming off from a stellar 28-point outing that saw him miss only a single shot from the field, Golden State Warriors star Kevin Durant is making his case as the best player in the league right now. The 30-year old superstar now has two NBA championships on his belt, and his next mission could be cementing his legacy as one of the most transcendent players in league history.

And what better platform for that mission than the heralded Madison Square Garden of the New York Knicks? Stefan Bondy of the New York Daily News reported that the eminent belief in the league is that Durant is headed to the bright lights of New York.

“It’s hardly groundbreaking at this point, but throughout this season I’ve asked  several NBA executives, agents, scouts, assistant coaches about Kevin Durant. Most  believe he’s headed to the Knicks.”

Durant, who is producing 26.8 points, 6.5 rebounds and 5.7 assists per game this season, is set to head a stacked free agency class this summer. Among the teams primed to pursue him in the offseason are the Knicks, the Lakers, and the Clippers. While staying in Golden State is the most logical option for him if he wants to continue racking up the Larry O’Brien trophies, winning a championship in New York could be the greatest platform for him to cement his legendary status.

The New York Knicks pulled off quite a stunner before the trade deadline when they shipped young superstar Kristaps Porzingis to the Dallas Mavericks in exchange for the services of flamboyant point guard Dennis Smith Jr. and center DeAndre Jordan. But ESPN’s Zach Lowe reports that the Knicks wanted a different road for the Porzingis trade before the Dallas agreement.

“The skills didn’t translate right away. Fox shot 41 percent as a rookie and averaged just 4.4 assists per game. Sacramento moved up in the lottery again — to No. 2 —  and faced a pivotal moment: the chance to reorient their team around Luka Doncic. Rivals sensed the dilemma and made offers for Fox — including a template from the New York Knicks centered around Kristaps Porzingis that would have required Sacramento to either send something beyond Fox or take unwanted Knicks salary (or both), sources say.”

Fox has been a vital cog in the Kings’ surprisingly good run this year. The 6-foot-3 playmaker is making his case for the Most Improved Player of the Year award by posting borderline All-Star worthy numbers of 17.6 points, 7.3 assists, 3.8 rebounds and 1.7 steals per game, while shooting a much-improved 37% clip from beyond the arc. If the Kings have bitten on the Porzingis bait, the Knicks would still have wanted more young players like Buddy Hield or Willie Cauley-Stein.

Lowe also says that the chance at nabbing Marvin Bagley III was too much for the Kings, a great factor that forced them to stay put with their draft pick. Another factor could be Porzingis’ health as he is still recovering from a Torn ACL injury, a setback that could cripple a big man’s basketball career.

The Los Angeles Lakers are officially out of playoff contention this season, but veteran point guard Rajon Rondo still believes that the current make-up of their roster is championship-worthy. ESPN’s Dave McMenamin recently sat down with Rondo as the 32-year old playmaker pointed that it’s still defense that ultimately wins championships.

“We still didn’t have a full deck this year so you can’t really throw out that philosophy and say it didn’t work. Championships are won defensively. It’s a miss-make league. You can’t control, obviously, the shots you make. It helps if you got a lot of shooters, three-point makers. But you’re not going to outscore Golden State Warriors in a  seven-game series. The only way you’re going to be able to do it is get defensive stops, and I think we had that type of roster when we were healthy as far as guys that take pride defensively.”

The Lakers front office surprised everybody when they deviated from the philosophy of surrounding superstar LeBron James with a multitude of excellent shooters. They acquired Rondo and Lance Stephenson in last year’s offseason, two versatile defensive guards flawed with shaky perimeter shooting. The Lakers are ranked a lowly 29th in three-point percentage this season, an obvious weakness that has hampered their potential to challenge the Warriors in the playoffs.

While Rondo has been improving on his shooting woes this season (36% from deep), it remains to be seen if the Lakers will re-sign him for next year. Rondo is averaging 8.8 points, 7.7 assists and 5.2 rebounds per game, but his heralded defense hasn’t been as impressive in this stage of his career.

When the Toronto Raptors traded long-tenured star DeMar DeRozan in exchange for two-time Defensive Player of the Year and 2014 Finals MVP Kawhi Leonard, it was not without some worrisome outcomes in the future. Leonard will be entering unrestricted free agency this summer, and pundits have it that the 27-year old superstar is already headed for the Los Angeles Clippers.

But the Raptors have been achieving success this season, toppling Eastern Conference perennial favorites Philadelphia 76ers and Boston Celtics in the standings. That will be the team’s advantage over other teams, as well as the loyalty and trust that Kawhi already has for the organization, per TSN’s Josh Lewenberg.

“However, as they’ve gotten to know Leonard better, they have come to understand the other priorities that drive him on daily basis. That’s what their pitch will centre on: trust, familiarity, a commitment to maintaining his health and the shared goal of chasing a championship, as well as the extra year and contract worth nearly $50 million more than anyone else can offer.”

Leonard, who is posting career-high numbers of 27.0 points, 7.4 rebounds and 3.3 assists per game, has only played in 55 of the team’s 76 games this season. While he has not sustained any major injuries in that span, the Raptors front office and medical staff have been opting to rest him in some games so as not to risk any aggravated injuries on their prized superstar.