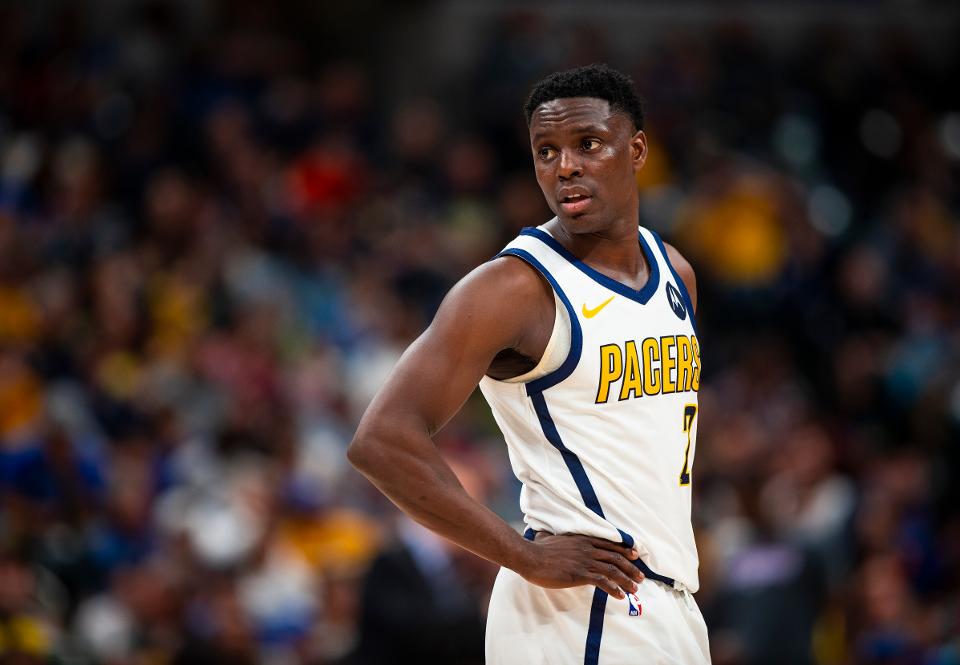 While veteran point guard Darren Collison isn’t really a household All-Star name, his announced retirement last summer was quite a shock to many. The 32-year old playmaker is still in tip-top shape to log in heavy minutes and fulfill even a starting role for any NBA team. However, ESPN’s Adrian Wojnarowski now reports that Collison is plotting his return to the league as he hopes to sign with either one of the two perennial contenders in the Western Conference.

“Veteran guard Darren Collison, who stunningly retired before free agency, is  considering a February return to the NBA -- with the Los Angeles Lakers and LA Clippers emerging as his preferred destinations, league sources told ESPN.”

Collison last played for the Indiana Pacers during the 2018-19 season. The pass-first guard started in all 76 games he played for the team, and normed averages of 11.2 points, 3.1 rebounds, 6.0 assists and 1.4 steals per contest. If he truly pushes for a comeback this February, there is no doubt that the veteran playmaker will attract a lot of interested teams, especially those in the playoff-contending ranks. A steady, natural ball-handler who can also play pesky defense on the other end of the court, Collison also put up an excellent 41% clip from the three-point line last season.

A sub-plot in this potential Collison comeback is that it could be another chapter of the free agency war going on between the Lakers and the Clippers. Reports have it that Kawhi Leonard shortlisted the Lakers as his preferred destination last summer. However, the two-time Finals MVP apparently doesn’t want to create another super trio in the league. He then opted to recruit Paul George to team up with him with the Doc Rivers-led Clippers squad.

Wojnarowski also added more fuel to the fire by reporting that there is a belief that the Clippers front office will aggressively pursue Collison so that he would not sign with the Lakers.

“The Lakers have been really looking for a secondary ball handler. He [Collison] is also another player that shoots the 3 at a high percentage rate. Part of the thinking in making sure you get Collison if you’re the Clippers is to keep him away from the Lakers.”

Should the Lakers successfully nab Collison midway through the season, it will be a huge boost to their second unit. Collison will be the primary facilitator in the Lakers’ offense when LeBron James rests, and he is also a surefire upgrade over the struggling Rajon Rondo. Most importantly, he could play effectively with LeBron, especially during closing time in the fourth quarter. James has always liked playing with point guards who can both space the offense with their long-range marksmanship and make the right plays on the defensive end. Collison surely has those two abilities, making him a perfect fit should the Lakers bring him in.

But if the Lakers management fail to recruit the returning point guard, Heavy.com’s Sean Deveney reported about a rumoured Plan B for the team. Deveney says that the Lakers have been targeting Orlando Magic sweet-shooting point guard D.J. Augustin.

“The Lakers have inquired about a number of potential veteran backup point guards and one potential target could come onto the trade market in the coming weeks:Orlando guard D.J. Augustin. The Lakers can’t trade a second-round pick until 2023, but the team does have rookie Talen Horton-Tucker, originally drafted by Orlando before he was traded to the Lakers, on hand.”

While Augustin does not possess the excellent playmaking skill that Collison has, he is still the better shooter. Augustin is coming off a 42% three-point clip last season, while averaging 11.7 points and 5.3 rebounds per contest. The Lakers’ guards this season have been underwhelming. Rondo is struggling with his shooting and turnovers, Avery Bradley isn’t as effective as he is expected to be, and Quinn Cook and Troy Daniels have been logging in minimal minutes. Either Collison or Augustin will be definite upgrades over those four names.

The Memphis Grizzlies have been adamant that they won’t buy out veteran defensive ace Andre Iguodala’s contract even before the season began. Despite rumors linking the Lakers and the Clippers to a pursuit of the three-time champion forward, the only way that they could nab Iguodala is when the Grizzlies buy out his contract. However, the chances of that happening is dimming. Eric Pincus of Bleacher Report wrote that the Memphis front office is now confident that they can structure a trade deal that will center on Iggy.

“"We will trade him, period," an executive with the team said. "We've gone far enough into the structure of deals with more than one team to say that [confidently]."

In other words, if teams like the Los Angeles Lakers (26-7) or Los Angeles Clippers (24-11) are hoping to get Iguodala on the buyout market, that's likely not going to happen.”

So if the Clippers and the Lakers are out of the picture, which team is more likely to engage with the Grizzlies in hopes of acquiring the defensive stalwart? Pincus also wrote that executives around the league believe that the Dallas Mavericks are the frontrunners to land Iguodala through a trade. However, Marc Stein of The New York Times already reported last December that the Mavericks front office is not “actively pursuing” Iguodala.

“The Mavericks continue to be linked to Andre Iguodala, but league sources say Dallas is not actively pursuing a trade for the Memphis swingman and does not plan to.

The Mavericks are fans of Iguodala and had interest during the summer, league   sources say, but the word here in Vegas at the G League Showcase is that Dallas continues to be measured with its trade targets even after its 18-9 start.”

After five straight Finals trips with the Golden State Warriors, Iguodala was shipped to Memphis last offseason. The Warriors organization made this difficult decision as they have to clear out cap space to re-sign Klay Thompson and Draymond Green, as well as acquire All-Star combo guard D’Angelo Russell.

Still, The Athletic’s Anthony Slater reports that the Warriors have maintained their interest in bringing back the 35-year old vet next season. With injured stars Thompson and Stephen Curry surely returning next year, Iggy can pursue another championship ring with the Dubs.

“For now, the Warriors are only curious spectators. Iguodala can’t rejoin them this season and wouldn’t, anyway. There’s no title to be won. But mutual interest remains in a reunion this summer.”

Iguodala, a 15-year veteran, has career averages of 12.1 points, 5.1 rebounds and 4.4 assists. An athletic swingman who has displayed his versatility on both ends of the floor, his trump card lies on his ability to play lockdown defense and be an effective anchor on that end.

It was no secret that Kevin Durant was ready to leave the Warriors camp after an unsuccessful trip to the 2019 NBA Finals. With the New York Knicks clearing out their cap space to sign two max free agents, they chased after the superstar scorer but failed in their pursuit. Instead, Durant signed with the Brooklyn Nets, joining the likes of Kyrie Irving and DeAndre Jordan in his new team.

Of course, there are plenty of personal reasons why Durant opted to veer away from the bright lights of the Madison Square Garden. Ex-Net and now Los Angeles Lakers swingman Jared Dudley shared one factor that turned off Durant on joining the Knicks, as per Bill Oram of The Athletic.

“The first thing I would be doing? I’d be getting rid of that practice facility in    Westchester. Nobody wants to live there, no one wants to commute there. You have to get as close to the city as possible. That’s why Brooklyn got Kevin Durant. I told DeAndre Jordan who told Kevin Durant: The practice facility is two minutes from (Barclays Center). They didn’t even know that. I lived in the city. It took me 12 minutes to get to the practice facility. That’s a huge bonus. People bash the Knicks,but I definitely wouldn’t bash the Knicks.”

Facilities are an underrated factor in every free agent’s decision on which team to choose. Players spend a huge chunk of their time in their respective teams’ practice facilities. Aside from the indoor basketball court where the team holds their scrimmages and reviews of their offensive and defensive schemes, practice facilities also include strength and conditioning rooms, video review rooms and the coaches’ office. So, it is not surprising that the Knicks’ Westchester training area became a roadblock for Durant to play for the dedicated fans of New York.