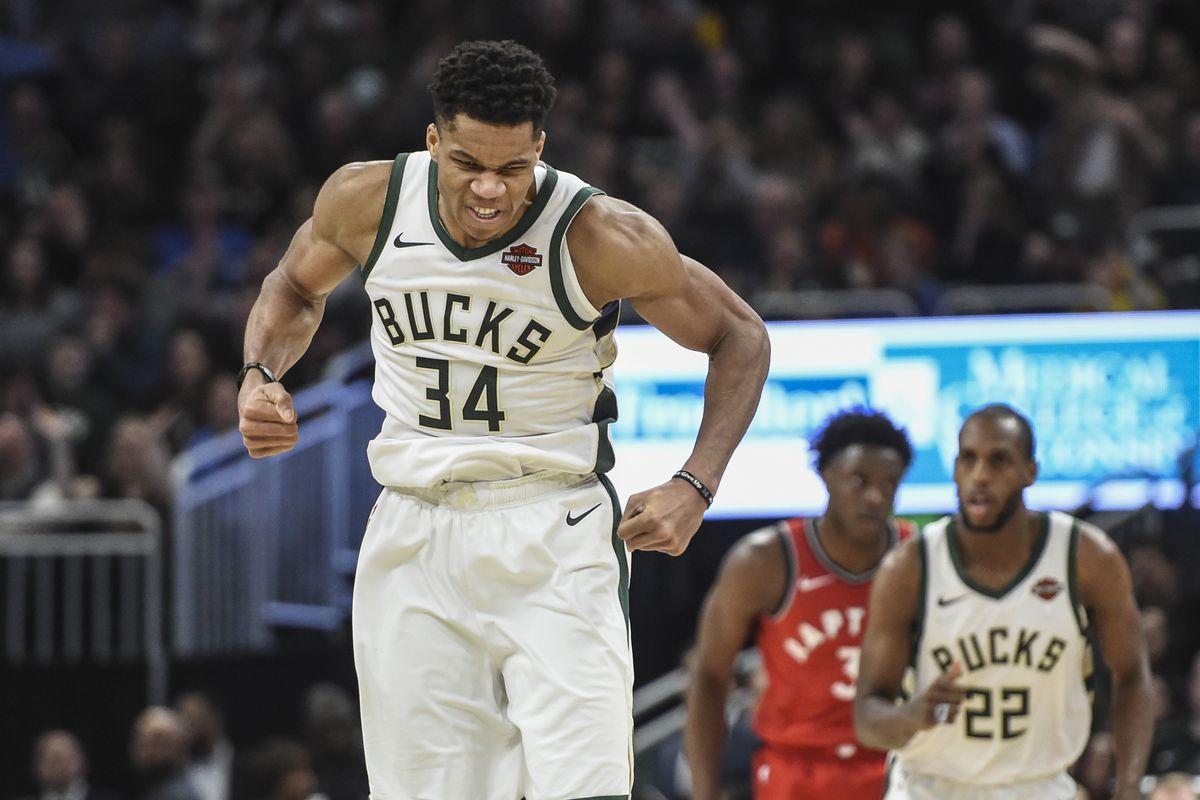 NBA Free Agency News: Raptors Sure To Chase Giannis In 2021

The Toronto Raptors may have lost Kawhi Leonard to free agency last summer, but they are not having their heads down. The defending champs now have the reigning MVP in their radar as reports surface about their plans to pursuit Milwaukee Bucks superstar Giannis Antetokounmpo. The Greek Freak will enter unrestricted free agency in 2021, and ESPN’s renowned insider Adrian Wojnarowski says that the Raps front office will go all-in on the 25-year old versatile forward.

“I think for Toronto, they look at this season and then they look at the summer of  2021, when like a lot of teams, they want to be in the sweepstakes for Giannis Antetokounmpo. You’re not going to see them do anything here that’s going to compromise their salary cap flexibility for the following year.”

If the Raptors aren’t planning on splurging on signing another top-tier player until the 2021 free agency season, then things will get a bit tricky next summer. Last year’s back-up point guard Fred VanVleet has been promoted to a regular starter slot this season. He ranks third in the team in total minutes per game, while averaging career-highs of 18.0 points, 3.8 rebounds, 7.0 assists and 2.0 steals. However, the 25-year old combo guard will become a free agent this summer and it’s almost a sure thing that he will demand a borderline max contract from interested teams.

On a more positive note, a couple of highly-paid players will come off the team’s salary book after this season. This year, Serge Ibaka is earning $23 million while former All-Star center Marc Gasol is being paid $25 million. Both big men will also enter free agency next year, leaving veteran star playmaker Kyle Lowry, recently maxed-out Pascal Siakam and young swingman Norman Powell as the only Toronto players garnering eight-digit salaries. Also worth taking note is the fact that Lowry’s two-year contract will expire in 2021.

Of course, the Bucks still have the upper hand on re-signing Giannis. Team co-owner Marc Lasry emphasized that the winning culture that they have built will be more than enough to retain their top-tier superstar, per Sam Amick of The Athletic.

“Whether it sounds dumb or not, I’m very comfortable with the relationship that we  have with everybody on this team. And I think at the end of the day, what players want is stable ownership. They want a culture which is focused on winning. They want a coach who they respect. They want to play in a city that they love. It’s what we all want.

Let’s be serious. You just want consistency, and you want to know that what you’re being told is reality. So I think as long as we do what we’re supposed to do, everything is going to be fine.”

Indeed, it will take more than an excellent pitch to pry Antetekounmpo away from Milwaukee. They are currently tied with the Los Angeles Lakers with a league-best 24-4 win-loss card. Their historic 18-game winning streak recently ended with a disappointing loss to the Dallas Mavericks, but that doesn’t take away the high level of talent and experience that the Bucks front office has surrounded Giannis’ unique skill set.

Antetokounmpo is norming a career-high 31.7 points, on top of 12.8 rebounds, 5.3 assists, 1.3 steals and 1.2 blocks per contest this season. If he succeeds in maintaining these numbers, the Greek Freak should be on pace to win his second MVP plum.

Ingram assured of a max contract next summer

The New Orleans Pelicans didn’t offer Brandon Ingram the rookie-scale max extension before the season began, paving the way for the young scoring forward to enter restricted free agency in the summer of 2020. During his own podcast show, The Lowe Post, ESPN’s Zach Lowe said that Ingram is sure to be offered a max contract.

“Oh he’s going to get the max. I don’t think there’s any question about that. By the way, I don’t fault the Pelicans for not extending him (on a rookie-scale extension).”

Ingram, 22, was acquired by the Pelicans through the Anthony Davis blockbuster trade with the Los Angeles Lakers last offseason. He is leading the charge for his new team, averaging a much-improved stat line of 24.9 points, 7.1 boards and 3.6 dimes per game. The 6-foot-9 lanky forward has grown to be a steady playmaker and an excellent defender, while still being the great shot creator that he has always been since his college days with the Duke University.

Pelicans’ newly-installed executive vice president David Griffin recently hinted out that the team will do every measure possible to retain Ingram for the years to come. Although the team is currently struggling with a lowly 6-22 record, the future is very bright for the Pelicans. They will have a fully-healthy Zion Williamson next season. Ingram and Williamson will be heading the team’s tremendous young core that also includes the likes of Lonzo Ball, Josh Hart and Jaxson Hayes.

On top of that, the Pelicans have a couple of valuable trade assets this season. As their current season is sure to go down the drain, reports have it that they have placed Jrue Holiday and Derrick Favors on the trading block. New Orleans will surely rake in future draft picks and even young quality players in exchange for those two veteran stars.

As for Ingram’s stance on his impending RFA situation next summer, the young forward also hints out that he’s here to stay. After a loss against the Utah Jazz, Ingram was seen waiting for his teammates in the tunnel towards their locker room. The fourth-year swingman told Dan Woike of the Los Angeles Times that through this gesture, he’s sending a message to his teammates that he’s here to stay.

“It’s something Tim Duncan used to do. Obviously, he has really high character. I know that if I’m doing that, I’ll have guys here that know that I still have their backs.  I’m still here, win or lose, never get too high, never get too low.

Ingram has started for the Pels in all the 24 games he played this season. His career-best season is a testament to his work ethic and character, especially considering that he was diagnosed with a potential career-ending blood clot injury on his shoulder last season.

D-Lo and Lakers were close to a reunion last summer

Now that the smoke has cleared on their failed partnership in the past, the Los Angeles Lakers almost offered D’Angelo Russell a multi-year deal last summer. The Athletic’s Anthony Slater wrote a very interesting column on Russell’s tenure with the Lakers, including this potential reunion.

“Russell only wanted serious bidders and, sources say, he had three: The Lakers —  wouldn’t that have been quite the reunion? — nearing a potential $100 million offer but in limbo until Kawhi Leonard made his choice, the Wolves, up over $100 million but still needing to create cap room to get to his max, and the Warriors, offering the full max in a complicated sign-and-trade involving Durant.”

Russell was drafted by the Lakers as the second overall selection in 2015. While D-Lo flashed his playmaking and scoring abilities in Hollywood, his stint with the team was marred with on and off-court issues. He was then traded to the Brooklyn Nets after a forgettable two-year stint with the Lakers. That is when his production flourished, paving the way for him to become an excellent leader for his new team.

True enough, Russell is now a far cry from the immature player that he was during his first two years in the league. Gary Vitti, the Lakers’ widely-known former trainer, emphasized that Russell has been handling his Lakers past in a very mature way.

“I think D’Angelo’s handled it perfectly. He looks back at the Lakers situation and, from what I’ve read he’s said, he hasn’t said anything bad about the Lakers. He’s said that was my past and I’ve learned from it and I’m moving on. That, believe it or not, is tremendous growth. If he wanted to, he could probably — especially with some of  the bad PR the Lakers have experienced the last few years — if he wanted to jump on the bandwagon, he could’ve done that. Yeah, when I was there, blah, blah blah. … But he didn’t do that.”

Russell, 23, has become the Warriors’ top scorer in light of the injuries to Stephen Curry and Klay Thompson. The lefty multi-dimensional offensive star is norming a stat line of 21.5 points, 3.4 rebounds and 6.2 assists per contest for Golden State this season. There has been persisting speculations that the Warriors front office will try to trade Russell for a more complementary fit next to Curry and Thompson. However, there hasn’t been any real traction to a possible deal as the Warriors are expected to wait out until after this season to gauge the league’s trade interest in Russell.