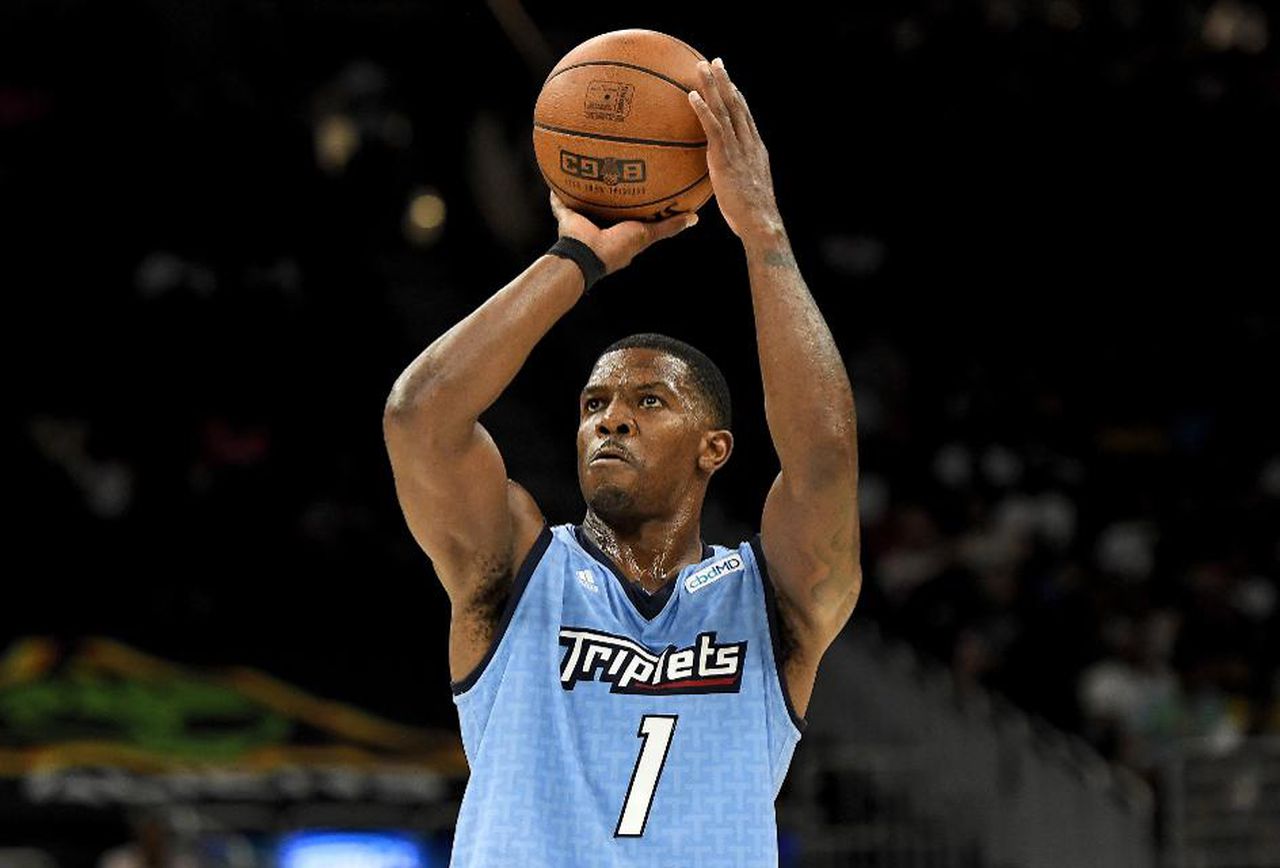 Veteran scorer Eric Gordon will be staying with the Houston Rockets after all. Jonathan Feigen of the Houston Chronicle has reported that Gordon and the Rockets have agreed to a lucrative four-year, $75.6 million contract extension, clearing out speculations that the former Sixth Man of the Year is still placed on the trading block.

“The Rockets on Friday reached agreement with guard Eric Gordon on the largest contract extension they could offer, a person with knowledge of the deal said.

With Gordon, 30, going into the final season of the four-year deal he signed with the Rockets as a free agent in 2016, the Rockets will sign Gordon to a four-year, $75.6 million extension, according to the individual familiar with the agreement. Including the remaining season on his contract, Gordon will earn roughly $90 million over the next five seasons.”

The 30-year old Gordon has been having the most efficient seasons of his career with the Rockets. He came off the bench to average 16.2 points, 2.2 rebounds and 1.9 assists per contest last year, while shooting 36% from beyond the arc and only incurring 1.3 turnovers every night. Gordon also upped his scoring to 17.8 in the postseason, while also increasing his three-point percentage to a 40% clip.

Interestingly, this extension comes after the Rockets front office made it clear a couple of months ago that they will revamp the roster. Veteran star playmaker Chris Paul, who was already traded to the Oklahoma City Thunder for Russell Westbrook, was a part of that trade plans, along with Gordon, young budding big man Clint Capela and PJ Tucker, per a tweet of ESPN’s Adrian Wojnarowski.

“Houston’s offering Clint Capela, Eric Gordon and PJ Tucker individually to teams w/ space to absorb salary. Rockets trying for best available first-rounder for any of those three, hoping to redirect pick to Philly in pursuit of Jimmy Butler sign-and-trade.”

However, all those plans seem to have changed after the Rockets successfully pursued the Westbrook trade. For now, that would be the smarter approach. With Westbrook re-uniting with former Thunder teammate James Harden, the Rockets now have two solid playmakers who are also very excellent in creating shots for themselves. Those attributes alone will gravitate the focus of the defense, potentially leaving a sharpshooter like Gordon on the wing or on the corner, waiting for a kick-out pass for the open three.

Gordon expresses how happy he is with his recent extension, and appreciates the fact that the Rockets ownership will do everything they can to win, per Mark Berman of Fox 26.

“It’s definitely exciting. I’m all about team success and me being a big part of that.They know my work ethic. They know my kind of leadership and what I bring to the table. Ownership wants to win. Now that we’re here for a long time, it’s easier to do  what’s necessary and right to win the championship.

It’s important because Houston is home. It’s great to know I’m [going to] be here for a  long time. It’s encouraging being part of a team that you like. A lot of people can’t say that. We always have a chance to win.”

There’s no doubt that in Gordon’s 11-year career in the NBA, his stint with the Rockets has been the most successful in terms of winning. They were so close to finally beating Stephen Curry and the Golden State Warriors and entering the Finals during the 2018 playoffs, but wilted in the end of Game 7 of that series when it mattered the most.

Coming off a disappointing postseason performance, the Rockets will be aiming to bounce back and topple the Western Conference’s powerhouse teams like the Lakers and the Clippers. During the offseason, they also signed defensive big man Tyson Chandler to log in quality minutes off the bench and mentor the developing Capela.

Iso Joe working out for contenders

The ESPN’s Dave McMenamin has recently reported that veteran shot creator Joe Johnson is indeed planning an NBA comeback, and will be working out for three contending teams. Johnson is coming off a successful championship run with the BIG3’s Triplets, even hitting the game-winning three-pointer for his squad.

“Fresh off an MVP and championship campaign in the BIG3, veteran swingman Joe Johnson is scheduled to work out for three NBA teams next week in attempt to get back into the league, sources told ESPN.

Johnson, who last played in the NBA in 2017-18, will audition for three Eastern Conference playoff teams from a year ago in the Detroit Pistons, Milwaukee Bucks and Brooklyn Nets, according to sources.”

Johnson, 38, last played for the Rockets during the 2017-18 season. In 23 games for the team, Iso Joe put up a stat line of 6.0 points, 2.8 rebounds and 1.7 assists, while playing 22 minutes per contest. Even though he’s already 38 years old, Johnson has kept his body in shape and his scoring touch is still better than most players in the NBA.

The seven-time NBA All-Star also confirmed to Marc J. Spears of The Undefeated that he is indeed receiving interest from teams and is planning to attend workouts for those interested teams.

“I am hopeful to get back, but I did not get in the BIG3 to get back to the ‘league. I had a great career. I enjoyed the process. The only thing that keeps the NBA fire in the belly is how it ended in Houston. That just does not sit well with me. So if an opportunity comes along and I feel that it is worth it, yeah, I take that chance.”

It was definitely a frustrating end to his Rockets’ stint in 2018. Johnson saw his role diminish during the team’s playoff run that year, playing only 6.8 minutes per contest. There was little knowledge of why Johnson’s minutes decreased, but his recent interview with Spears could shed some light.

“My mom was sick the whole time [in the 2017-18 season]. It was not even possible for  me to play even if teams were calling. With her being that sick, I spent a lot of time in Little Rock last year.”

Johnson’s mother, Diane Johnson, died on February 23 just this year. She was diagnosed with multiple myeloma, a cancer that targets bone marrow plasma cells, as per Spears.

Johnson also says that his recent successful stint in the BIG3 became a therapy for him in the wake of his beloved mother’s death. With the NBA training camp just a couple of weeks away from starting, it’s safe to say that Johnson will find a new home in the league in the coming days of this week.

It has been a busy summer for Jaylen Brown this summer, playing an important role for the Team USA’s campaign in the 2019 FIBA World Cup at China. The 22-year old Boston Celtics young star is just starting, and the upcoming 2019-20 season might just be his most productive yet. NBC Sports Boston’s Jacob Camenker predicts that Brown will receive a very lucrative deal when he enters restricted free agency next year.

“With the dearth of talent projected to be available on the market next offseason, Jaylen Brown could now garner significant attention as a restricted free agent. With fewer high-quality players to spend big bucks on, a talent-needy team with cap space could choose to make Brown a Godfather offer in the hopes that the Celtics won't be willing to match.”

This is the main reason why Brown could demand a gigantic offer from interested teams. A team will definitely put up a monster deal for Brown in a hopeful bid that the Celtics would hesitate to match and just let go of their young two-way star. Of course, it’s hard to imagine Boston taking that risk especially with Brown learning a lot from his international experience this offseason.

Brown, 22, racked up a stat line of 13.0 points, 4.2 boards and 1.4 assists per game for the Celtics last season. His three-point percentages also went down to 34% from a 40% clip during his sophomore year. It was definitely a step back from his impressive second-year averages, arguably a result of how dysfunctional the Celtics were last year. But with a fresh start this upcoming season, expect Brown to turn up the engine and produce a career-best campaign.