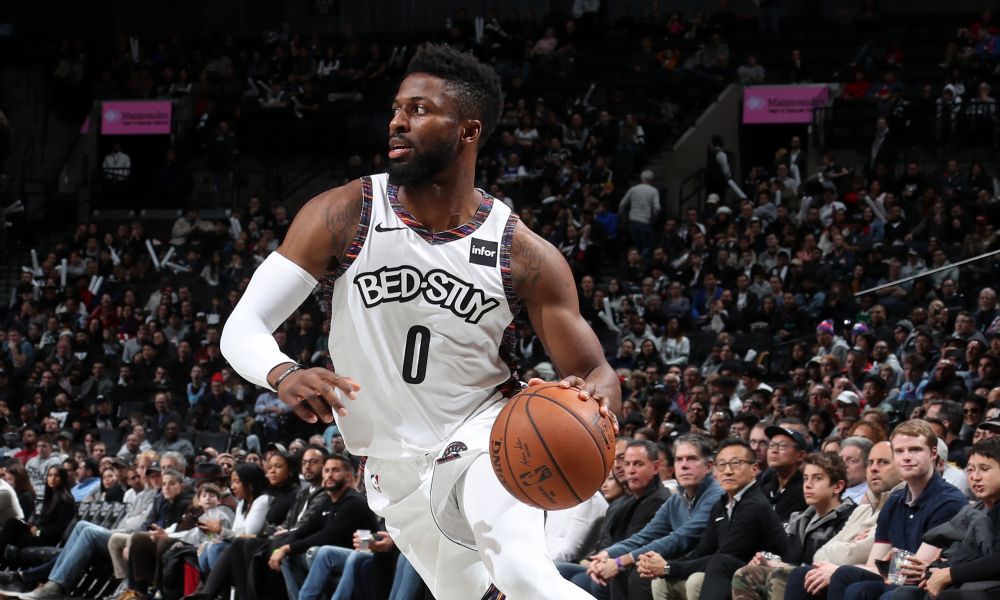 The Houston Rockets bring in another defensive stalwart in the name of David Nwaba to boost their championship hopes when the season resumes in late July. Nwaba, who went undrafted in 2016, played 20 games for the Brooklyn Nets before being waived last January.

In that measly sample size, Nwaba was able to come up with efficient numbers.  The 27-year old small forward normed 5.2 points and 2.3 assists per game for the Nets, while shooting an outstanding 43% clip from the three-point line.

Shams Charania of The Athletic was the first to report on the Rockets’ new signing, although the Rockets are making a cut on their current roster. Kelly Iko, Charania’s colleague in The Athletic, reported that the team will waive center Isaiah Hartenstein to further amplify their small-ball, pace-and-space offense.

“If the organization’s full-time commitment to small ball wasn’t the biggest indicator that Isaiah Hartenstein’s days as a Rocket were numbered, the surrounding factors— his previous 7/15 guarantee date being pushed back, the league’s new weeklong transactional period, and the pool of available free agents—certainly told a bigger story than anything.

A team source confirmed to The Athletic that Hartenstein will be waived from the    roster as the team continues with resumption preparations. With the Rockets roster  set already and lacking in flexibility to add a free agent during this week’s transactional period, the only way the team could have added a new face was to cut  one that was already on the senior squad.”

Getting rid of Hartenstein would leave the Rockets with only one traditional big man in Tyson Chandler. They have committed to a full-blown small-ball line-up since giving the starter center position to the 6-foot-6 PJ Tucker. Robert Covington, an excellent 3-and-D player they acquired through a midseason trade with the Minnesota Timberwolves, is placed at the power forward role.

Trailing Chandler in terms of length are the 6-foot-9 Bruno Caboclo and the 6-foot-8 veteran forward Jeff Green. Both players have the ability to man the two forward positions, but playing the center role is a new territory for them.

This trend in the Rockets system will also make it very difficult for Hartenstein to earn minutes in the rotation. Drafted 43rd in the second round of the 2017 NBA Draft, the American-born German center has only logged in an average of 9.5 minutes in his two seasons with the Rockets.

In the same column that he wrote, Iko emphasized that Hartenstein won’t be utilized that much in the season resumption. However, Iko also said that the Rockets aren’t closing their doors on the young big man.

“The reality of the situation is Hartenstein wouldn’t have played much in Orlando anyway. Recent addition Robert Covington arrived around the trade deadline but arrived head-first into the swing of the season. Houston will use this second training camp to build the roster, get everyone up to speed and on the same page. The franchise is also very high on Caboclo, for his two-way potential.

There’s a possibility that Hartenstein could return to the team in the future,  assuming he’s not claimed off of waivers by another team. I’d assume Houston doesn’t want another Gary Clark situation, in which the door was kept open for a return but was picked up by another team. There was earlier interest in the season from Memphis, but it’s unclear if that still remains.”

Having said that, it’s exciting to see how Rockets head coach Mike D’Antoni will employ the small-ball line-up in the playoffs. There are teams like the Los Angeles Lakers who have the traditional two-big man line-up on the frontcourt. The Denver Nuggets have All-Star center Nikola Jokic, a hulking big who should pose heavy problems on the Rockets’ defense. Chandler could always fill in for defense, but the question lies on how many minutes D’Antoni can give to the veteran defender without compromising their spacing on offense.

Much rumoured to be in the Rockets’ radar since the NBA announced the new transaction window for free agent signing, it is now reported that Tyler Johnson will be with the Brooklyn Nets in the season resumption. ESPN’s Adrian Wojnarowski was the first to report about this interesting development for Nets fans.

Johnson, who is at the tail end of the four-year, $50 million contract he signed with the Miami Heat in 2016, should be a solid addition to the Nets’ depleted roster. With Kyrie Irving and Kevin Durant sidelined for the rest of the season, the 7th-seeded Nets squad definitely needs another ball-handler.

In the 13 games that he played for the Suns last season, the lefty combo guard averaged 11.1 points, 4.0 rebounds, 4.2 assists and 1.1 steals per contest. However, his value to the Suns drastically declined this year after the team picked up all-around point guard Ricky Rubio in free agency last summer.

Interestingly, the Nets front office has always coveted Johnson’s skill set. In that summer of 2016 that he inked a multi-year contract with the Heat, he was actually a restricted free agent. The Nets offered him that $50 million contract, but Miami was quick to match the offer to retain Johnson’s services.

Fast forward to current time, it was not just the Nets who extended interest in him. Jonathan Feigen of the Houston Chronicle reported that the Rockets considered bringing in Johnson.

“The Rockets in preparation for next month’s restart of the NBA season are looking at several options for a roster move including signing free agent guard Tyler Johnson, a person with knowledge of the team’s thinking said Friday.

Johnson, a 6-4 guard, was waived by the Suns in February after the trade deadline. He was among the players the Rockets showed interest in signing in 2016 when the Nets signed Johnson to a four-year, $50 million contract that the Heat matched. He was dealt to Phoenix in 2019 for former Rockets forward Ryan Anderson.”

The Rockets instead went for a different route, signing David Nwaba, a defensive-minded perimeter player who actually logged in 20 games for the Nets this season. While Nwaba is more skilled as a defender, Johnson’s ability to create shots for himself and for his teammates should still be more valuable and more fit for Brooklyn’s current team needs.

With that said, the Nets could definitely provide big minutes for Johnson. Spencer Dinwiddie should still be their primary ball handler, but Johnson’s versatility will allow him to co-exist with Dinwiddie and move Caris LeVert to the small forward position.

The Nets have also been in the headlines for the past couple of weeks, primarily due to Irving’s firm voice against the season resumption. Wojnarowski wrote that Kyrie is leading a group of players who also have concerns towards the league’s plans of resuming the current 2019-20 campaign.

“So, yes, it surprised several of his NBPA colleagues that Irving -- lost for the season with shoulder surgery in March -- was simultaneously lending his voice to a far different discussion with rank-and-file union members on upending the league's plans for a 22-team restart at Disney World in Orlando, sources said.

On a call that included nearly 100 players and several stars on Friday night, Irving made an impassioned plea for players to make a stand and sit out the season's resumption in Orlando, sources said. Around 90 minutes in length, the call included several players suggesting they'd be willing to sit out the season -- and numerous more discussing social issues, league economics and, ultimately, a sense that they needed to be united in a decision.”

Irving cannot actually play in the season resumption even if he wanted to. He is still not medically-cleared to return to the basketball court due to the shoulder surgery he went through at the early part of the year. Durant is also not playing as he and the Nets’ medical staff are adamant in their decision last summer that the two-time Finals MVP will sit out the whole year and focus on his recovery from Achilles injury.