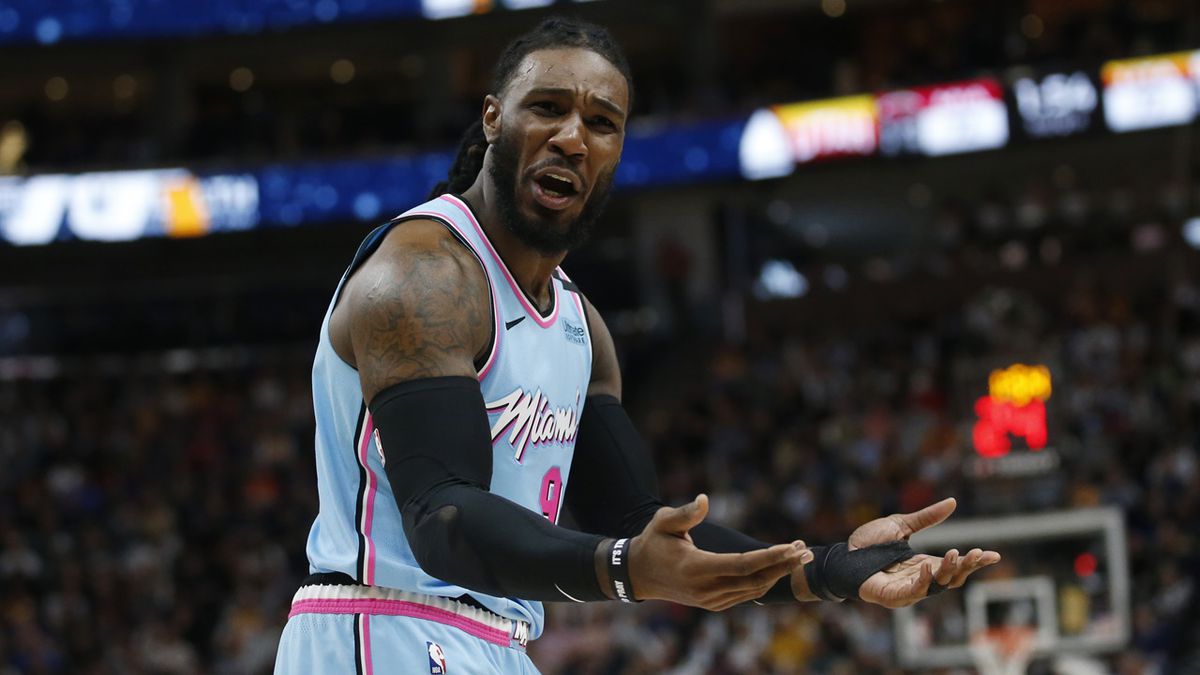 Andre Iguodala could have been hands down the top name in this list, but the Heat has already given him a two-year contract extension. But this list’s crown still stays in the South Beach as their newly-acquired 3-and-D vet Jae Crowder will become an unrestricted free agent in the offseason.

Along with his dependable three-point shooting and flashes of playmaking on the offensive end, it is on defense that Crowder does his most damage. Players who can effectively guard four different positions are widely-coveted around the league, so look for a bevy of teams to come knocking on Crowder’s door during free agency.

Lauren Gunn of SB Nation’s Mavs Moneyball wrote about Crowder’s time in Dallas, and how he cracked Rick Carlisle’s rotation during his rookie year.

“In Crowder’s first season, he played seventeen minutes per game and got to start sixteen games. We all know Carlisle and how conservative he can be with rookies, so seeing him give Crowder a shot said a lot about how much he believed in the rookie. Carlisle frequently praised Crowder, saying that he was a hard worker and a team guy.

Crowder developed into a valuable defensive wing with a decent jumper (streaky from three), but he sat behind Richard Jefferson, which is how he ended up becoming a piece in the trade for Rajon Rondo with the Boston Celtics.”

The question now lies on how far the Heat front office is willing to go to retain Crowder. Goran Dragic is also entering the free agency market, as well as two more of their rotational pieces in Meyers Leonard and Derrick Jones Jr. A Crowder re-signing should bolster their roster depth, but the Heat will not be very desperate as they have already secured Iguodala’s services for the next couple of seasons.

Just like Crowder, Harkless also possess the ability to defend both forward positions while also effectively switching out onto smaller and quicker guards. He has the mobility and smarts to go with his 6-foot-7 length, as well as a slightly reliable shot from the three-point line.

Harkless brings intangibles to the table, important contributions that are not really shown in the stat sheet. His long-range marksmanship may be a bit streaky, but Harkless rarely makes the wrong decisions with the ball. In a column written by Marc Berman of the New York Post, a Western Conference personnel told Berman that Harkless’ value is ever growing.

“He understood his role — mainly to guard one of the other team’s best perimeter players, sparing Kawhi [Leonard] and Paul [George] for parts of games. He is an excellent defender — especially when guarding against guards and smaller wings. In Portland and in L.A., he played with ball-dominant stars, so he was often tucked in the corner. But when he cuts, he can be effective getting to the basket.

I think there is a significant adjustment going from a situation where he had the ball in his hands a lot, with plenty of chances to find his rhythm, to one where he will inevitably have fewer opportunities. He fit in well with the group. But that adjustment takes time and it was unfortunately interrupted.”

Having said that, Berman also reported that the Knicks are bent on re-signing Harkless. It may not be another lucrative contract, but signs point towards the possibility that the defensive-minded combo forward is staying in the Big Apple.

Early this year, Roberson said that he is still not ready to play after two long years of sustaining consecutive major injuries. But with the playoff-bound Thunder returning in the season resumption, we could see Roberson finally don the threads and sneakers again and be the excellent defender that he has always been.

Of course, rust will be an issue for Robinson as he sat out everything in the past couple of years. That’s a long time of no competitive basketball, but the 6-foot-7 defensive ace has always had great instincts on both ends of the court. In an appearance on the Catching Up With The Family podcast, Roberson himself said that he is already past rehabilitation and it’s now a matter of regaining game shape and strength. (h/t CBS Sports’ Michael Kaskey-Blomain)

"I'm kinda past the rehab stage. I'm almost to the point where I should be playing, honestly. But I'm still taking it a day at a time until I get back into our medical staff's hands and get reevaluated. Just staying patient through it all and knowing that the light is right there at the end of the tunnel. It's definitely been a long journey and it's coming to an end."

The amount of interest he will attract in free agency will depend on how good he can play in the season resumption, if he ever plays at all. We should not forget that Roberson was a serious candidate for the Defensive Player of the Year award during the 2016-17 season. He still has glaring weaknesses on his offense, but his excellent defensive instincts are just hard to ignore in today’s switch-heavy defense.

Although his overall scoring average this season is below the double-digit mark, Bazemore normed 10.3 points and 5.0 rebounds in the 21 games that he played for the Kings. He also shot an outstanding 39% clip from the three-point line, and played an important role as a primary defender for the Kings.

It is also not a coincidence that Bazemore’s arrival has helped turn around the Kings’ season. He knows how to play his role as a defender, and he can also space out the floor really well. In a column written by Blake Ellington of SB Nation’s Sactown Royalty, Bazemore emphasized that the Kings may have quite a disappointing record but that doesn’t mean that their culture is not a winning one.

There is no doubt that Bazemore fits well with the Kings, so look for him to stay in Sacramento beyond this season. That is a sure thing if Bazemore agrees on a bargain deal. Remember that the Kings front office also has a big decision to make with Bogdan Bogdanovic’s impending restricted free agency, although reports have it that the team will do everything to match any offer from other teams.