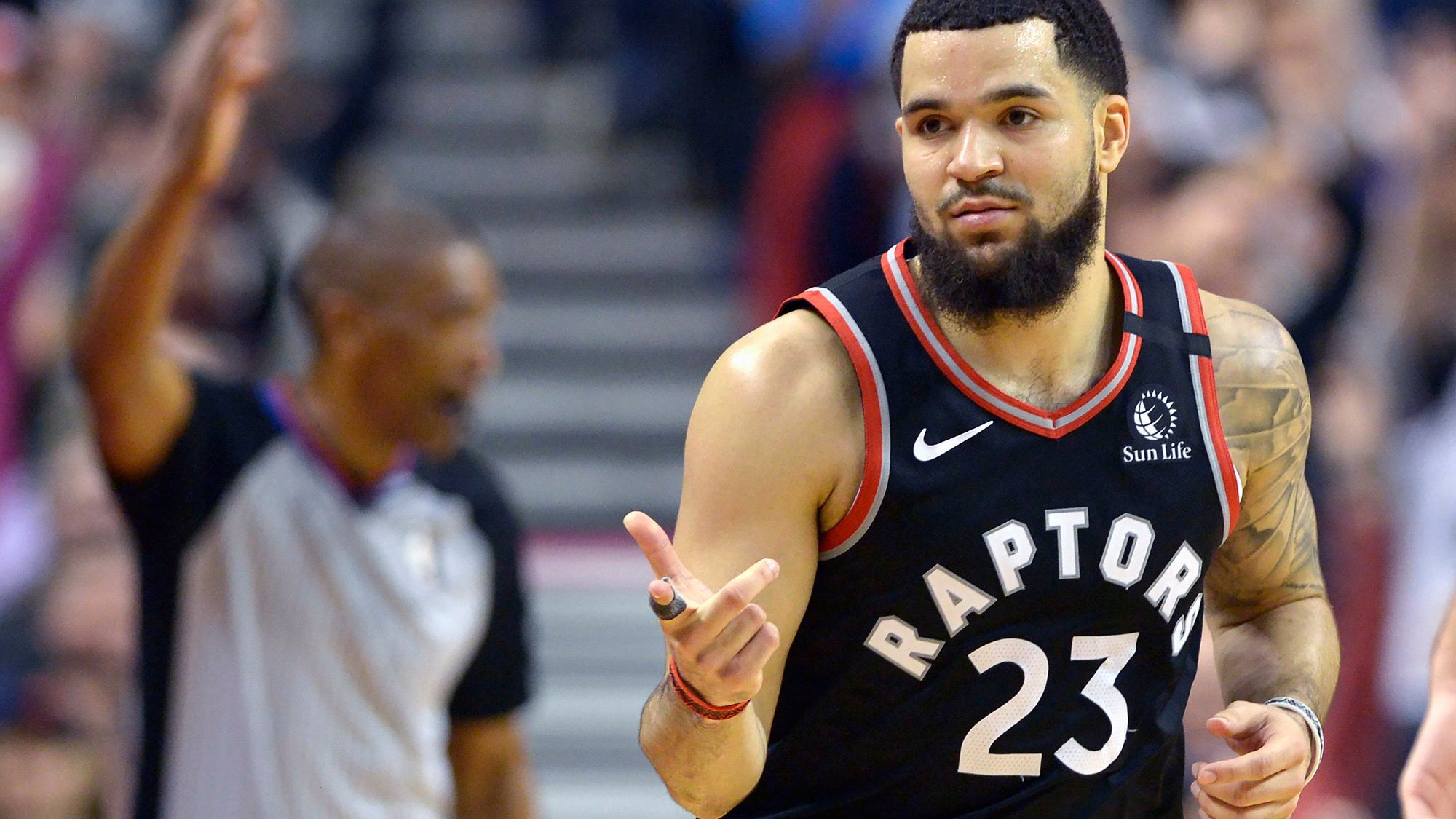 NBA Free Agency Report: Fred VanVleet to Get a Lot of Suitors With Strong Play in the Bubble

The Toronto Raptors managed to maintain their status as one of the title contenders this season despite losing Kawhi Leonard and Danny Green in free agency. One of the main reasons why the Raptors are staying relevant in the title race is the excellent showing of Fred VanVleet.

VanVleet averaged 17.6 points to go along with 6.6 assists and 3.8 rebounds in 54 games for the Raptors this season and is also making a lot of noise inside the NBA bubble. In Game 1 of their first-round playoff series against the Brooklyn Nets, the 26-year-old guard erupted for 30 points on 11-for-15 shooting from the field, including an impressive 8-for-10 clip from deep.

And because of his impressive play this season, the former Wichita State standout is expected to get a big payday in free agency. According to Brian Windhorst of ESPN, the four-year, $85 million contract signed by Malcolm Brogdon with the Indiana Pacers year would be the market for VanVleet. Windhorst believes that the sharp-shooting guard will have plenty of suitors in free agency.

"The Detroit Pistons and Dwane Casey, who used to coach VanVleet in Toronto,  opened a swath of cap space when trading Andre Drummond earlier this year," Windhorst said. "The New York Knicks and the Atlanta Hawks, two teams with cap space that could use a combo guard who can play on or off the ball, also are possible options."

Windhorst said that the Raptors will have some decisions to make, especially if VanVleet's stock continues to rise in the playoffs. Key big men Serge Ibaka and Marc Gasol would also become free agents in the offseason, but Windhorst thinks that both of them are likely candidates for one-year deals in the offseason.

Like Windhorst, Preston Ellis of Bleacher Report is also convinced that Detroit is a realistic landing spot for VanVleet in the event he decides to sign elsewhere. Ellis said that the Pistons could be the team that would offer a contract that would be too much for the Raptors to match because they need a point guard.

"The Pistons are desperate for help in the backcourt following the departure of Reggie Jackson and the imminent exit of Brandon Knight," Ellis said. "Though they could undergo a full-scale rebuild, it's unlikely they'd be able to do so with Blake Griffin on board."

Ellis said that if the Pistons keep Griffin and add VanVleet, it would be a good step towards relevance for Detroit. They also have another promising big man in Christian Wood, who is expected to get an attractive offer from the Pistons. It is also worth noting that the Pistons could improve their stock with a lottery pick in the upcoming draft.

Ellis said, though, that teams interested in acquiring VanVleet should also keep an eye on the Miami Heat. The Heat have been striking a lot of surprising deals in recent years, and they are certainly capable of catching another big fish in the offseason. He pointed out that Miami is the dark-horse contender for VanVleet if they let Goran Dragic walk away because the Raptors guard is much younger than the Slovenian veteran.

"Goran Dragic has had an exceptional season. However, at 34, he hardly fits the timeline of Bam Adebayo, Kendrick Nunn, Tyler Herro, and Duncan Robinson," Ellis said. "The Heat are said to be looking for a bigger swing in the form of Giannis Antetokounmpo, Bradley Beal, or Jrue Holiday. However, if they're looking for a sure thing who fits their timeline, they could make a move for VanVleet."

Goran Dragic Would Be a Great Fit for Los Angeles Lakers

The Los Angeles Lakers have been one of the worst offensive teams in the NBA bubble, but they are still in the hunt for the championship this season. But if they fail to win it all this year, Dan Favale of Bleacher Report said that the Lakers should prioritize signing a player who could provide offensive stability when LeBron James is on the bench.

The Lakers are undoubtedly hard to defend when James is on the floor, but it is no secret that they have been struggling without him as their facilitator. And if there's one upcoming free agent who could give James and the Lakers a lot of help, Favale believes that it would be Goran Dragic.

The Lakers will likely consider bringing Rajon Rondo back and sticking with Alex Caruso, but Favale pointed out that Dragic is a bigger threat than their current point guards. Kyle Kuzma has also shown that he could take over in offense when James is not on the floor, but signing Dragic, who averaged 16.2 points and 5.1 assists in 59 regular-season games for Miami this season, could make him a deadlier option in offense.

"Kyle Kuzma's sweet, sweet shooting in Disney might convince the Lakers they don't as desperately need another scorer. That'd be a mistake," Favale said. "Kuzma is doing a lot of his damage off the catch—which, for the record, is just what Los Angeles needs—and cannot double as table-setter. Dragic brings the entire offensive package: from-scratch scoring, playmaking, and floor spacing, all of which the Lakers still need in much, much heavier supply."

Regardless of the results of their title campaign this season, Favale is still convinced that the Lakers would be an attractive free-agent destination in the offseason. They have their taxpayer's mid-level exception, which might be enough to sign a player like Dragic, especially if the veteran point guard prioritizes winning over money.

The Los Angeles Clippers are also expected to become an attractive destination for free agents whether or not they win the title this season. The Clippers appear to be contented with their current center rotation of Ivica Zubac, Montrezl Harrell, and JaMychal Green, but Favale believes that they should strive for more in the offseason.

If the Clippers decide to shore up their center rotation, Favale thinks that the Clippers should go after Marc Gasol, who will be an unrestricted free agent in the offseason. Gasol is a winner, having won a title with the Raptors last season, and would be a good fit for the Clippers' system.

"Marc Gasol represents an appreciable defensive and passing upgrade over all the  Clippers' current center options," Favale said. "Contrary to Harrell and Zubac, he allows them to play five-out. And unlike Green and Morris, he does so without surrendering any size. Investing in what will be Gasol's age-36 season is too risky for certain teams. The Clippers aren't one of them."

Gasol averaged 7.5 points and 6.3 rebounds in 44 regular-season games for the Raptors this season. He is playing in the final season of his five-year, $113.21 million contract. The veteran center is being tagged as a potential ring chaser in free agency, which would give the Clippers a strong chance of acquiring him in the offseason.

The Charlotte Hornets are one of the teams who will have significant cap space in the offseason, which they can use to shore up their roster to at least contend for a playoff spot. There are several upcoming free agents linked to the Hornets, including Sacramento Kings center Harry Giles.

The Kings are likely to let Giles walk away to prioritize their other free agents like Bogdan Bogdanovic, Kent Bazemore, and Alex Len. If Giles becomes available in the market, James Bu of Swarm and Sting believes that the Hornets should make a run at signing him, saying that the 22-year-old would be a great fit to their young core.

"Giles is very suited to modern NBA basketball due to rare combination of   ballhandling and passing ability," Bu said. "Giles would immediately fit in with Borrego’s playbook. He can screen for Devonte’ Graham and Malik Monk in the pick and roll, he can run handoffs with Terry Rozier."

The former Duke University standout averaged 6.9 points and 4.1 rebounds in just 14.5 minutes per game in Sacramento this season. Knowing that he failed to make an impact this season, the young center is not expected to demand a big payday in free agency, making him a logical option for Charlotte.

However, Hornets general manager Mitch Kupchak told Rick Bonnell of The Charlotte Observer that they will not spend a lot for a free agent in the offseason. The veteran general manager said that they are focused on improving the team through the draft and minor trades.

"Even though we’ll have cap room, I don’t feel free-agency is the answer for us at this time," Kupchak admitted. "So that talent is going to have to come from the draft or a trade."

The Hornets would be in a good position to add another promising piece to their young core. They will have the eighth best odds to land the top pick in the 2020 NBA Draft. Charlotte will know their final draft position after the NBA Draft Lottery on Thursday.