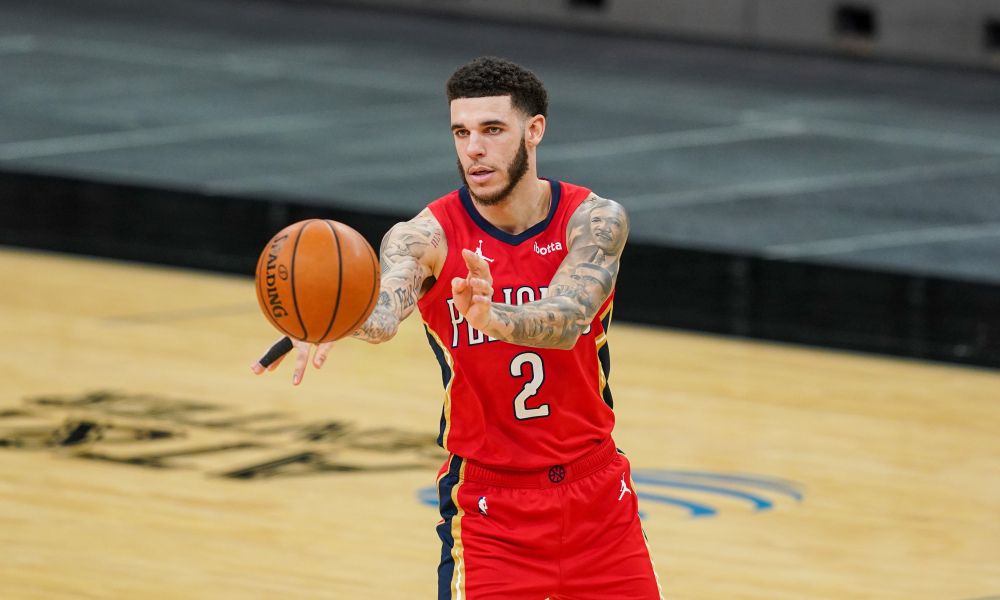 Lonzo’s first priority is to re-sign with Pelicans

With the New Orleans Pelicans again failing to book a coveted ticket to the 2021 NBA Playoffs this season, their sights are now focused on re-structuring the team’s roster around young and talented All-Stars Zion Williamson and Brandon Ingram. It is without a doubt that the future of the franchise is in the hands of those two versatile forwards, so this upcoming offseason will be about how David Griffin and the Pelicans front office will create a supporting cast that will fit those two stars’ unique skill sets.

Speaking of the Pelicans’ supporting cast, they have a big decision to make with Lonzo Ball, their 23-year-old starting point guard. Ball, who is on his fourth year in the league, will enter restricted free agency in the offseason. His stellar all-around play this season will certainly attract a lot of suitors, but there is no doubt that the Pelicans have the inside track on signing the combo guard.

In the 55 games that he played for the Pelicans this season, Ball was able to put up an excellent stat line of 14.6 points, 4.8 rebounds, 5.7 assists, 1.5 steals and 0.6 blocks per game. On top of those excellent numbers, Lonzo is also norming career-highs in shooting percentages. The 6-foot-6 point guard has produced a 41% overall clip from the field, including a 37% clip from the three-point line and a 78% clip from the free throw line. All of those three percentages are the highest marks of his young career so far.

As per Andrew Lopez of ESPN, Ball says that he has definitely improved his skill set, especially those areas that have proved to be his weaknesses in the past. The Pelicans guard also took the time to say that he would love to return to the team, and help Ingram and Williamson bring this squad to the next level, and hopefully to the NBA playoffs next season.

Ball also singled out Zion’s name, saying that he is a once-in-a-generation talent that he has never played with before.

"That's a conversation between me and my agent moving forward. But obviously I would love to be back. I built a bond here with the coaches and the teammates who are here. I definitely wouldn't mind coming back at all. I think my shooting picked up from all levels of the court. That was the main thing for me this year. My role was different this year. Kind of more of a 3-and-D role. I think I fit into it pretty well. I think overall it was a solid season for myself.

I think I'm a basketball player. Whatever the coach wants from me, I'm going  to go out there and do it to the best of my abilities. [Pelicans coach Stan Van Gundy] put me in a little different position this year than I've been in my whole life. But I think I made the most of it. And I think I had a pretty good year. He's a one-of-a-kind player as well. I've never played with somebody  like that. Like I said, I think we have the pieces. We just have to put it together. We're a young team. We're only going to get better. If we can keep it together, that'd be great. But I can't tell the future. I'll just wait for the call and see what happens."

Ball, who came in as a heavily-touted prospect out of the UCLA Bruins program, was selected as the 2nd overall pick during the 2017 NBA Draft. He was selected by the Los Angeles Lakers, who were rebuilding back then after the retirement of the late great Kobe Bryant the year prior.

Lonzo would immediately make his impact during his rookie year with the Lakers, evidenced by his astounding numbers of 10.2 points, 6.9 rebounds, 7.2 assists and 1.7 steals per contest. But it was true that his shooting and individual scoring lagged behind in his all-around skill set, and his numbers decreased in his second year in the league.

With LeBron James announcing his shocking move to Los Angeles during the summer of 2018, Ball found himself in a very tricky situation. He had to complement James’ play, and at the same time produce numbers that should be higher than those that he put up during his rookie season. But Ball’s long-range shooting was still unsteady back then, and it was obvious that he was not the perfect fit next to LeBron as the four-time Most Valuable Player would almost always handle the ball on the offensive end of the floor.

So Ball was shipped to the Pelicans as a major part of the deal that landed superstar big man Anthony Davis to the Lakers. Along with Ball, Ingram was also traded to New Orleans, as well as young defensive perimeter player Josh Hart. Ball was able to figure out his three-point shooting in his first year with the Pelicans as he produced an efficient 37% clip from beyond the arc.

It might still be early, but Ball has already shown an attitude of not giving up and bouncing back when it matters the most. During a game against the Golden State Warriors at one point this season, Lonzo backed up his words by putting up a career-high 33 points and knocking down one clutch shot after the other.

As per a separate column written by Lopez for the ESPN, Ball says that he believes in himself, especially considering the hard work he has put in throughout the years.

"I just knew I let my team down and I wasn't gonna do that two nights in a row," Ball said about sending the text to Williamson. "I know the type of  player I am and I believe in myself. I knew I wasn't gonna shoot 3-of-18 again. I just wanted to let Z know I was gonna be there with him tonight.

"I know what I can do on the court and I didn't step up to the plate last game. I wanted to be there for the guys tonight, especially Zion. He's going out every night basically getting 30 and 10 for us. For me to have the type of performance I had yesterday is pretty unacceptable, especially at this time of the year. I wanted to fix it."

Of course, re-signing Lonzo would not assure the Pelicans of a spot in the playoffs next season. They still have a lot of ground to cover, especially in terms of bringing in much-needed roster depth on their line-up. With the departure of veteran shooting guard JJ Redick, the Pelicans were stripped of two important things: shooting and veteran experience.

This is a very young team that is spearheaded by two very young players. Ingram and Williamson may be very talented players, but it is true that they still need a player who can perform under pressure, especially during the crucial stages of a game in the fourth quarter. It was during those clutch moments that the Pelicans seem to drift away from their game plan, and that has been the unfortunate story of their season.

Yet, it is the desire of the whole Pelicans squad to retain Ball and secure his services for the long run. As per Jacob Rude of the Lonzo Wire, Ingram points out to the fact that Ball is a generational talent that could help end the playoff drought in New Orleans and take them to a brand new level of play.

“I really hope those guys can be with us next year, of course,” Ingram said. “In my exit meeting, I talked a lot about those guys, especially Zo and how I think he’s a generational talent with his passing ability and the things that he sees on the basketball floor that nobody sees, his IQ, how he can manipulate    the game and on the defensive end, his anticipation. Josh Hart, how he can      knock down that three ball and on the defensive end, he can pretty much  guard everybody one through three. That’s something special to have. I’m hoping those guys can be with us next year but I also hope those guys can make a lot of money and feed their family.”

Aside from Lonzo, Josh Hart is also set to enter restricted free agency in the summer. Establishing himself as one of the best perimeter rebounders in the NBA, Hart has put up a decent stat line of 9.2 points, 8.0 rebounds, 2.3 assists and 0.8 steals for the Pelicans this season.