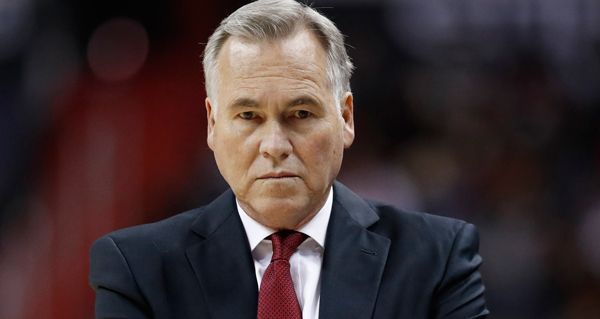 The Houston Rockets may have cleared up half of the team’s coaching staff in the past couple weeks, but they are still bent on retaining head coach Mike D’Antoni for the next few years. ESPN’s Tim MacMahon reports that the Rockets front office have sat down again with D’Antoni to continue negotiating a contract extension.

“The Houston Rockets and Mike D'Antoni have rekindled discussions about a   contract extension for the head coach and are nearing an agreement, sources told   ESPN on Saturday.

Rockets owner Tilman Fertitta has agreed to eliminate the buyout language that was the primary reason that D'Antoni and his agent, Warren LeGarie, ended talks on May 30, sources said.”

Just a week ago, reports surfaced that the Rockets have stopped negotiating with D’Antoni’s camp over some conflicts on the contract. D’Antoni’s current deal with the Rockets will expire in 2020. Houston’s semi-final exit in this year’s playoffs obviously frustrated the team’s front office, leading to multiple ousters in the coaching staff and a big decision to revamp James Harden’s supporting cast.

Before both camps renewed their contract talks, Rockets general manager Daryl Morey reiterated that the team actually offered D’Antoni a contract extension, per Jonathan Feigen of the Houston Chronicle.

“Rockets general manager Daryl Morey clarified Monday that the team’s offer to coach Mike D’Antoni for the 2020-21 season would never have paid him less than the $5 million base salary Rockets owner Tilman Fertitta had described last week.”

While Morey’s clarification on the issue at hand is true, MacMahon still says that there was an argument as to a potential buyout of D’Antoni’s new contract.

“However, the original offer included only $2.5 million in guaranteed money, due to a buyout in case the Rockets fired D'Antoni before the end of the season, or if they did not make the playoffs and terminated him after the season.”

Does D’Antoni deserve this extension? Is he the right coach for Harden and the Rockets? There’s no denying that the 67-year old head coach is a brilliant offensive tactician who has further empowered Harden’s unique skillset. In his three-year stint at Houston, the team has compiled a winning record of 173 wins against 73 losses. They were just a win away from returning to the NBA Finals last year, but failed to protect a double-digit lead in the Game 7 of the Western Conference Finals against the Golden State Warriors.

Still, there are some doubts as to how D’Antoni system would hold up against teams that do an excellent job on both ends of the floor. His Phoenix Suns team led by Steve Nash and Amar’e Stoudemire was a very good squad, but they also failed to top the West and enter the championship stage. One thing that the Rockets top brass could do is to complement D’Antoni’s offensive brilliant with a defensive-minded coaching staff. That way, Harden and the rest of the team would get the best of both worlds.

After a couple of months of interviewing for their top coaching spot, the Memphis Grizzlies front office has finally hired their new head coach in Taylor Jenkins, an assistant coach for the Milwaukee Bucks. Jenkins has built a very successful partnership with Bucks head coach Mike Budenholzer since their time with the Atlanta Hawks from 2013 to 2018.

Zachary Z. Kleiman, executive vice president of basketball operations for the Grizzlies, has high regard for Jenkins, per Teresa M. Walker of The Associated Press.

"Taylor has an excellent coaching pedigree, and we are confident he will lay the groundwork of developing the young players on our roster while having the elite basketball acumen and forward-thinking positive vision to be a high-level NBA head coach.”

Jenkins will have his work cut out for him at Memphis. After making it to the playoffs seven consecutive times, the Grizzlies have failed to enter the postseason in the past couple of years. The team has been slowly rebuilding the roster, with long-tenured star Marc Gasol shipped to the Toronto Raptors and star point guard Mike Conley about to be traded this summer. With that said, Jenkins himself emphasized that the Grizzlies front office knows it’s not easy to turn a losing franchise around and they are not putting tremendous pressure on the newbie head coach, per the Associated Press.

But there are plenty of reasons for Grizzlies fans to be optimistic about the team’s future. With the second overall selection in this year’s draft, Memphis has the opportunity to pick Murray State dynamic point guard Ja Morant. They will potentially roll out a deadly 1-2 combo of Morant and sophomore big man Jaren Jackson Jr, plus the assets they will receive when they trade Conley in the offseason.

Shams Charania of The Athletic has finally confirmed rumors that San Antonio Spurs assistant coach Ettore Messina has moved overseas to coach the Olimpia Milano. Charania also mentioned that Messina will be tasked to head the basketball operations of the team.

“Spurs assistant coach Ettore Messina has agreed on a deal to run basketball       operations and become the new head coach of Olimpia Milano, sources tell             @TheAthleticNBA @Stadium. Messina has been a lead assistant on Gregg     Popovich’s staff since 2014.”

With Messina’s departure, the Spurs have now lost two assistant coaches as Ime Udoka has also reportedly jumped ship to join Philadelphia 76ers’ Brett Brown’s coaching staff. Messina will now return to his coaching roots in Europe, where he won the EuroLeague Coach of the Year twice, and also led his team to four championships. Aside from his successful stint in the EuroLeague, Messina has also coached championship teams in the Italian League and the Russian League. He was inducted to the Italian Basketball Hall of Fame in 2008, and was selected as one of the 50 Greatest EuroLeague Contributors in the same year.

While it would be probable now that Messina will never land a head coaching job in the NBA, the stellar coach was never lacking in suitors. He interviewed with the Charlotte Hornets, the Milwaukee Bucks and the Toronto Raptors last year.

Just a couple of weeks after announcing the re-signing of head coach Ryan Saunders, the Minnesota Timberwolves have hired David Vanterpool as associate head coach, per ESPN’s Adrian Wojnarowski. Vanterpool served as an assistant coach for the Portland Trail Blazers this season, and has recently been a sought-after head coaching candidate.

Vanterpool is widely-known for his excellent knack on brilliant defensive schemes, along with his efforts on further developing the Blazers star backcourt duo of Damian Lillard and CJ McCollum. This move makes perfect sense for Minnesota, especially after they hired Pablo Prigioni to assist Saunders on the Wolves’ offensive sets, per Wojnarowksi.

It has been a whirlwind of changes for the Timberwolves top brass so far, beginning with the installment of Gersson Rosas as the team’s new president of basketball operations. Rosas has since announced his tenure with multiple changes in the coaching staff, though there are still no reports on how he will revamp the Wolves’ roster around superstar center Karl Anthony-Towns.