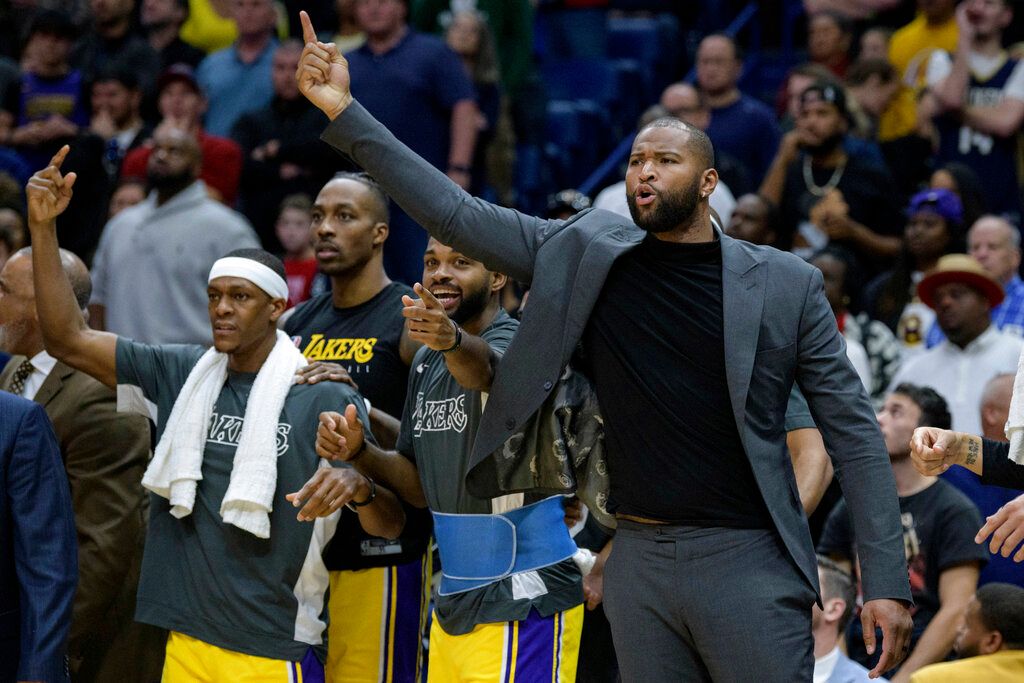 NBA Injury Report: Cousins Set To Reinforce Lakers In Time For The Playoffs

Versatile big man DeMarcus Cousins could be activated to the Lakers’ rotation just in time for the start of the postseason this coming April. In an interview during the NBA All-Star Media Day last weekend, Lakers head coach Frank Vogel announced that Cousins’ recovery from a Torn ACL injury is not hitting any road bumps and is currently “on track to get healthy by the playoffs.” Cousins, who played for the Golden State Warriors last season before joining the Lakers the following summer, suffered an ACL injury while working out in the offseason.

It is indeed an injection of excitement for Lakers fans as Cousins’ arrival would give them an instant offense off the bench. The former All-Star big man is already a proven excellent scorer, and has grown to become a solid playmaker as his understanding of the game continues to mature. It is just unfortunate that the prime years of his career have been derailed by successive injuries, starting with a ruptured Achilles injury he suffered in 2018 while still playing for the New Orleans Pelicans.

While the optimism is growing regarding Cousins’ eventual return to the court, Vogel emphasized that there is still no timetable for his big man’s full recovery, as per ESPN’s Dave McMenamin. The former Indiana Pacers and Orlando Magic head coach also reiterated that Cousins is still a long way to go before he completes his rehabilitation period.

"There is no date, and there's really no specifics on it in terms of, I'm not even sure where he's at with exactly what he's doing day to day. I just still know he's a long way away, but they've said they're not ruling out him returning. That's really all I can give you. I just know he's not close. As he starts getting close, it could be a review thing, because [the training staff will] come to me and let me know."

Luckily for the team, they have not gone through another major injury to their current active frontcourt players. Superstar big man Anthony Davis has missed only seven of the Lakers’ 53 games, while starting center JaVale McGee was sidelined for only two nights. Dwight Howard, the veteran and former All-Star defensive center they signed to fill in for the void that Cousins left, has been amazingly healthy as he has appeared in every Lakers game this season.

With that said, there is no assurance that Cousins will be given a significant amount of minutes even if he returns 100% healthy. With a starting frontcourt of Davis, McGee and main star LeBron James, young budding combo forward Kyle Kuzma has been relegated to the bench to lead the team’s second unit. That means that Kuzma and Howard are already manning the power forward and center positions, respectively. It is nearly impossible to think of a scenario where Cousins and Howard will play at the same time, so unless an injury to either McGee or Howard happens, there is no use for the Lakers to pressure themselves into inserting Cousins to the rotation.

But then again, this is a good problem for the Lakers moving forward. Cousins will serve as an excellent insurance card, although LeBron himself asserted that the team is prioritizing the big man’s health over anything.

"We want to continue to stay optimistic about his health. We don't want no setbacks, as he's had before in the last couple years. But his health is most important, and if we can get Cuz anywhere back to what he was capable of doing a couple years ago, it's a plus for us. But there's no pressure on him. There's no pressure on our ballclub to have him out there right away, or whenever that case may be. We want him to be healthy and have a great, clear mind and a great attitude, which he's done since he's gotten here."

With a stellar 41-12 record this season, why would the Lakers worry about the changing the current successful status quo? If the Lakers plan on further bolstering their line-up, the needs will lie on acquiring another capable shot creator to continue the flow of the offense when LeBron takes a seat on the bench or secure the services of a proven lockdown defender to guard the likes of Kawhi Leonard, Paul George or James Harden in the playoffs when things get testy and more physical.

Defensive point guard Kris Dunn’s presence on both ends of the floor has been valuable for the Bulls this season, With such a young group of talented players, the 25-year old Dunn has served a mentorship role for his team while putting up all-around numbers of 7.3 points, 3.6 rebounds, 3.4 assists and a career-high 2.0 steals per contest. But the tides would not just tilt on the Bulls side as Dunn suffered a sprained MCL in his right knee that will need four to six weeks of recovery.

The team announced this recent unfortunate development through their official page at NBA.com.

“Chicago Bulls guard Kris Dunn underwent an MRI and re-examination on Friday,Feb. 14 by Dr. Brian Cole at Midwest Orthopaedics at Rush. He will continue his current rehabilitation program of his medial collateral ligament sprain for the next 4-6 weeks before progressing to functional training. A determination will be made at that time if additional treatment is required.”

After being selected fifth overall in the 2016 NBA Draft, Dunn spent just one year with the Minnesota Timberwolves. His rookie season was a disappointment as he only logged in 17.1 minutes in the 78 games he appeared for the Wolves and accumulated a stat line of 3.8 points and 2.4 dimes. He came into the league with a reputation of being a solid defender, but he has glaring weakness in his offensive repertoire. Dunn only shot a lowly 28% clip from beyond the arc during his rookie year, while his overall field goal clip of 37% was stunningly bad.

Yet, many players find it very difficult to learn excellent defensive instincts. But Dunn has shown that he is quite natural at that facet of the game, something that the Bulls organization obviously loved when asked for him in that famous Jimmy Butler trade deal. Along with Zach LaVine and Lauri Markkanen, Dunn was shipped to Chicago in the summer of 2017. There, Dunn showed everyone that he has what it takes to be a future elite point guard in the league. In his first season with the Bulls, Dunn upped his production to 13.4 points, 4.3 boards, 6.0 assists and 2.0 steals per game, a positively far cry from the paltry numbers he normed during his debut season with the Timberwolves.

He ultimately maintained that production the following year, but the Bulls are still lacking in team success. As the team continued to inject an abundance of young blood this season, the fourth-year combo guard also assumed the role of a mentor for Chicago’s talented but inexperienced guards Coby White and Ryan Arcidiacono.

Bulls head coach Jim Boylen expressed his remorse on the situation and said that the team will sorely miss Dunn’s effort and hustle, as per Shannon Ryan of the Chicago Tribune.

“When a guy is out we try to focus on what a guy does well, what a guy does for the team. Kris Dunn does a lot of things that don’t show up on the stat sheet. We miss those things.

We’ll figure out who we’re going to start tomorrow and we’ll see how that goes. We had two good days of practice trying to get our legs back, trying to blow the rust out but also try to develop the things we need to do better.”

Dunn’s absence will be felt by the struggling Bulls squad, who is now on a frustrating seven-game losing skid. They are current sporting a 19-37 record and are 5.5 games behind the Orlando Magic for the last playoff spot in the East.