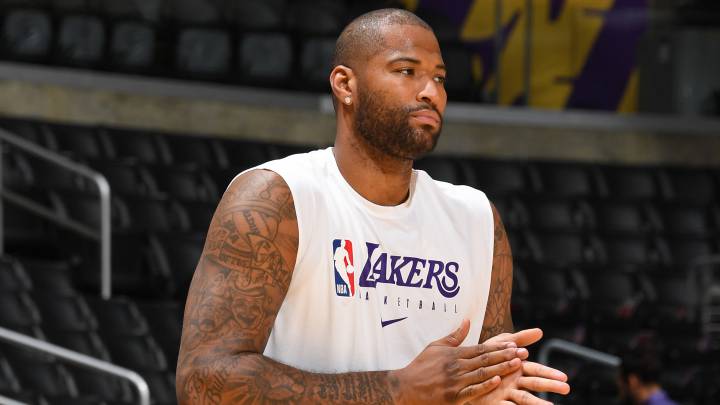 There were rumors last week that free agent big man DeMarcus Cousins have decided to scratch off the rest of the season. However, it is now being reported that the four-time All-Star is still undecided on potentially signing with one of the 22 teams invited for the season resumption to be held in Orlando.

In a column that Tania Ganguli wrote for the Los Angeles Times, Cousins’ agent Jeff Schwartz reiterated that his client “hasn’t ruled out either option” regarding playing in Orlando or continuing his injury rehabilitation process.

Cousins, who has sustained consecutive major injuries in the past couple of years, inked a deal with the Los Angeles Lakers last summer but did not play a single game this season. The Lakers decided to waive him at the middle of the season to free up a roster spot for an active player, but it is believed that the team remain the frontrunners for Cousins’ services in case he decides to play.

Should Cousins pick the route for a return, there will be tons of interest for him. Shams Charania of The Athletic reported that “multiple teams have expressed interest” in the former All-Star. In an appearance on a Get Up episode hosted by Mike Greenberg, ESPN’s Adrian Wojnarowski  said that Cousins has been working out during the NBA’s lull time and that he is one of the most interesting names to watch in the new transaction window.

“There’s not a deep pool of players, of talented players, who could come in and make an impact, Greeny. Here’s an interesting name to watch here in this transaction window that starts at noon today, runs for a week, DeMarcus Cousins. He’s been working out at the P3 facility in Santa Barbara, rehabbing that knee injury from preseason last year before the Lakers had to waive him to create a roster spot. Cousins is going to be … he and his agent Jeff Schwartz, I’m told, they’re going to be very careful about where they might commit. There’s teams interested, but they’re going to have to find the right situation for him to come back now. Because they can give him another six months of rehab and preparation for next season, wouldn’t rule him out with a team this year. But it’s got to be the right team, the right situation or he just waits until training camp next year with a new team.”

Truth be told, Cousins is still a very versatile big man whose skill set perfectly fits today’s pace-and-space offense. The 6-foot-10 center can score inside as well as he can from the outside. His playmaking is also underrated, and he is not a bad operator on the defensive end either.

Among the teams who are interested in bringing in Cousins is the Washington Wizards. John Wall, his former college teammate in Kentucky, has been recruiting him to play for the nation’s capital for years now. The 9th-seeded Wizards are among the Eastern Conference teams invited to Orlando. With Davis Bertans reportedly sitting out the season resumption, there is a spot in the roster for Cousins.

Still, the bets are on the Lakers’ side. Eric Pincus of the Bleacher Report mentioned in his column that a former NBA executive believes that Cousins’ good working relationship with LeBron James and Anthony Davis makes him a viable option for the Western Conference frontrunners.

“So is he a possibility for the Lakers?

A former executive said of Cousins and the Lakers, “That’s the only team. He respects [LeBron James], and he’s [Anthony Davis’] boy. [Other teams] don’t want that distraction. There’s a small window of time to play, and you can’t let up.”

Of course, there are still other squads who are in need of a multi-dimensional big man like Cousins. The Dallas Mavericks lost their starting center Dwight Powell to an injury last January, and Cousins could definitely work with another sweet-shooting big man in Kristaps Porzingis.

The Miami Heat is always known for stacking up veteran talent, and they have been playing two big men in their starting frontcourt. An all-around stalwart like Cousins could definitely slot in alongside All-Star Bam Adebayo.

As for the Wizards, a partnership could be a far cry. Chase Hughes of NBC Sports Washington emphasized that both parties’ priorities are conflicting as of this moment.

“The free agent would be for the short-term. And, because of that, they can definitively  rule out center DeMarcus Cousins, according to a person familiar with their plans.

Cousins has often been linked to the Wizards in rumors over the years and just last week John Wall, his good friend and college teammate, told the Undefeated he was lobbying for Washington to sign him. Cousins tore his ACL just over 10 months ago and, if signed, would be more about taking a long-term flier, hoping he can regain his form when healthy.”

Minnesota Timberwolves team president Gersson Rosas has provided a positive update on Towns’ wrist injury, a setback that had him sidelined in the team’s last twelve games before the suspension of games.

In an article written by Chris Hine of the Minneapolis Star Tribune, Rosas said that Towns’ recovery from his wrist injury is indeed progressing. This is indeed a piece of good news especially Towns, who has been through a lot after his mother succumbed to COVID-19 last April.

“On Wednesday, the Wolves held a virtual media availability to discuss their season ending and how the organizaiton has responded to the death of George Floyd. On the call, President Gersson Rosas again declined to give specifics on Towns’ wrist, but said the organization feels “positive” about how Towns’ wrist is progressing.

“At the right time we’ll make a formal announcement of where things are at, but to be fair out of respect for Karl and what he’s living through right now, we want to make sure and give him his space and his opportunity to work through things moving forward,” Rosas said. “Big picture, we feel positive about that situation and when the time is right we’ll share more details on the specifics of that.”’

Hine also mentioned in the article that Towns and the Wolves front office decided to let the wrist “heal on its own without opting for surgery.” The 24-year old superstar only played 35 out of the 64 Minnesota games this season. He is posting career-highs in points and assists with 26.5 and 4.4, while pulling down 10.8 rebounds per game and norming a stellar 41% clip from the three-point line.

Before the wrist injury that he suffered last February, Towns already missed 18 games due to a knee injury. It is another down year for the Timberwolves, although they racked up a couple of very valuable pieces before the trade deadline. They scooped up D’Angelo Russell from the Golden State Warriors through a trade, while also acquiring young 3-and-D stalwart Malik Beasley from the Denver Nuggets.

As for Towns, it is truly admirable how active he still is in pursuing the people’s fight against social inequality issues. He is seen at the forefront of protests against police brutality, and joined the likes of former NBA player Stephen Jackson, actor Jamie Foxx and teammate Josh Okogie.

"We need each other now more than ever," Okogie wrote on Instagram. "I am immensely disgusted in the amount of pain and suffering that my fellow black brothers and sisters have to endure until change happens. We can no longer be alienated and we can no longer normalize the injustices that this system of oppression feeds us. No more lives need to be lost."

Towns and the Timberwolves will spend several months more off the NBA court as they are one of the eight teams not invited to the season resumption in Orlando. But with one of the worst current records in the league, the Wolves have a solid opportunity at landing a Top 3 pick in this year’s draft. With Russell, Towns, and Beasley as their key cogs, this young Wolves squad should make huge strides next season.