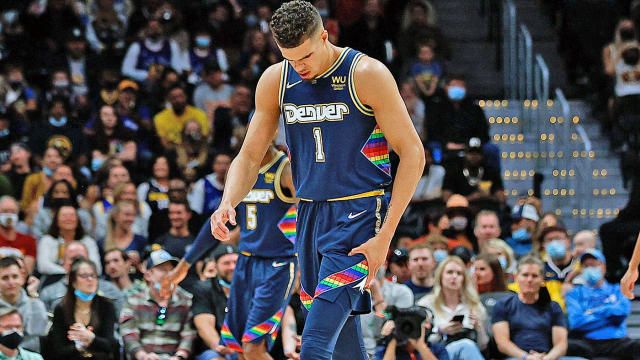 It seems like injuries are always hindering the Denver Nuggets’ stars and their pursuit of their lofty ambitions in the playoffs. As per a report by Senior NBA Insider Adrian Wojnarowski of the ESPN, it has become apparent that Michael Porter Jr. of the Nuggets will be going through a lower back surgical procedure, and may miss the rest of the 2021-22 NBA Season. This is definitely a frustrating development in the Nuggets camp, especially with star point guard Jamal Murray yet to log a single game for them in their current campaign.

It could also be noted that Porter, who was one of the most highly touted prospects entering the 2018 NBA Draft, missed his entire rookie year due to a bothersome back injury. Even though Porter was arguably a Top 5 talent in his class, most NBA teams passed up on him because they were concerned about the condition of his back injury. As a result, Porter saw a total of 13 names get selected ahead of him, before the Nuggets took a chance on him and selected him with their 14th overall pick.

Porter has only played in nine games this season, while logging an average playing time of 29.4 minutes per contest. However, there is no doubt that he is feeling the effects of his bothersome back injury as he is only putting up a stat line of 9.9 points, 6.6 rebounds, 1.9 assists, and 1.1 steals per game, including a lowly set of shooting percentages that consist of a paltry 36% overall clip from the field, a horrendous 21% clip from the three-point line, and a very low 56% clip from the free throw line.

Having said all these, this potential season-ending injury for Porter could spell some dark times for the Nuggets. As per a column written by Dan Devine of The Ringer, he mentioned that while there is no denying that Porter is one of the most talented young players in the league right now, it is also true that his back problems are obviously limiting his efficiency and overall impact to the game.

MPJ quickly flashed his tantalizing talents, scoring in bunches while fighting to win Michael Malone’s trust on the defensive end, and eventually earning a rotation role on a Nuggets team that finished third in the West during the  pandemic-shortened 2019-20 season. He built on Denver’s conference semifinals trip in the bubble, cementing himself in Malone’s starting lineup and finishing third in Most Improved Player voting after averaging 19 points and   7.3 rebounds per game on scorching .663 true shooting. Porter stepped his game up when pressed into duty as a second option alongside eventual MVP Nikola Jokic following the devastating loss of Jamal Murray to a torn ACL, averaging 23.5 points per game on 56/49/85 shooting splits during the regular season, and scoring 52 points on 32 shots in games 5 and 6 of the shorthanded Nuggets’ first-round playoff victory over Damian Lillard and the Trail   Blazers.

A lower-back tweak limited his effectiveness as the Suns swept Denver out of the  second round, but Porter’s performance in a larger role was enough to convince president of basketball operations Tim Connelly to commit to him as a pillar of  what the Nuggets hope will be a perennial contender in Colorado. The creeping and unavoidable concern now? That, as the surgeries and lost court time continue to mount, Porter might not be able to shed the shell—that his once-boundless potential  might begin to bump against cruel physiological limits.

Porter, who just turned 23 years of age last June, is currently on his third year with the Nuggets. During his first season in the NBA after that major back injury in 2018, Porter showed glimpses of his talent on the offensive end of the floor, although he only put up a stat line of 9.3 points, 4.7 rebounds, 0.8 assists, 0.5 steals, and 0.5 blocks per game. Still, he showed that he can make all kinds of shots, even those that he had to launch with a defender right in his face.

Porter would go on to display that talent in his sophomore year and he even turned it up a notch. During his second year with the Nuggets, Porter had a breakout season as he was able to come up with a stat line of 19.0 points, 7.3 rebounds, 1.1 assists, 0.7 steals, and 0.9 blocks per contest, including a very efficient set of shooting percentages that consist of a 54% overall clip from the field, a 45% clip from beyond the arc, and a 79% clip from the free throw line. It was apparent right there and then that Porter has the tools and the skill set to become a multi-faceted offensive player, and an excellent centerpiece of the Nuggets’ future.

That is the main reason why the Nuggets front office became extremely confident of what Porter brings to the table, and they gifted his efforts with a lucrative five-year, $172 million contract extension that will kick in during the start of the 2022-23 NBA Season. With his excellent knack for scoring and his unique ability to play different positions while standing at 6-foot-10, that was surely a good investment on the part of the Nuggets front office. With how basketball has become a positionless game, players who could fill in multiple roles and play a balanced game on both ends of the floor are valuable assets, and the Nuggets saw that in Porter.

But of course, this Porter injury will definitely hurt the Nuggets’ chances this season. They may still have the reigning Most Valuable Player in Nikola Jokic, but it is also true that the team has to endure and overcome injuries to their key players just to get out of the stacked Western Conference. Along with Porter, Jamal Murray, who is still out with a knee injury, is still recovering from an ACL injury and there is still no exact timetable for his return. Other players in the Nuggets’ injury report are PJ Dozier, who is done for the season due to an ACL injury, and JaMychal Green, who is listed as day-to-day due to an elbow injury. However, even with all the injuries, Devine said in his column that he does not believe that the Nuggets will be going in for a tank this season, especially with Jokic putting up another outstanding performance this season, something that they do not just want to go to waste.

I don’t see the Nuggets deliberately going into the tank, though. Jokic is an MVP who was playing even better than last season when he sprained his wrist, carrying the Nuggets to respectability and a winning record even amid all the other injuries; so long as he’s ambulatory, Denver won’t be bad enough to plummet all the way to the bottom of the league. If more injuries crop up, though,  and Jokic begins to strain from the weight of carrying an even larger workload  than he already is, it could keep the Nuggets down around 10th place, potentially opening the door for a team that has struggled through the first quarter of the season—the post–Luke Walton Kings? The re-Zion-ed Pelicans? The plucky young Spurs or Thunder?—to sneak into the play-in chase.

Whatever the spate of injuries means for Denver in the short term, though, pales in comparison to its ramifications for the future. Through smart scouting, determined player development, and carefully considered moves, the Nuggets built a bona fide beast, constructing a roster around Jokic capable of winning a   championship; remember, after snaring Gordon from Orlando at the 2021 trade deadline, Denver ripped off eight straight wins, blowing opponents’ doors off by nearly 14 points per 100 and looking for all the world like a team that had put its final piece into place.

With Porter, Dozier, and Murray out for a significant amount of time, the Nuggets will rely on the able shoulders of Jokic and hope that they could receive consistent contributions from their supporting cast. All-around small forward Will Barton is putting up a tremendous stat line of 16.2 points, 5.3 rebounds, 4.3 assists, and 1.0 steals per game, while Aaron Gordon and Monte Morris are also putting in double-digit scoring averages.

The Nuggets are sporting a record of 10 wins against 10 defeats, good for the 9th spot in the conference. After winning their last assignment against Bam Adebayo, Kyle Lowry, Duncan Robinson and the Miami Heat, the Nuggets will then finish the rest of their current seven-game road trip with tough matchups against the Orlando Magic, the New York Knicks, the Chicago Bulls, the New Orleans Pelicans, and two more games against Dejounte Murray, Keldon Johnson, Derrick White, and the San Antonio Spurs.