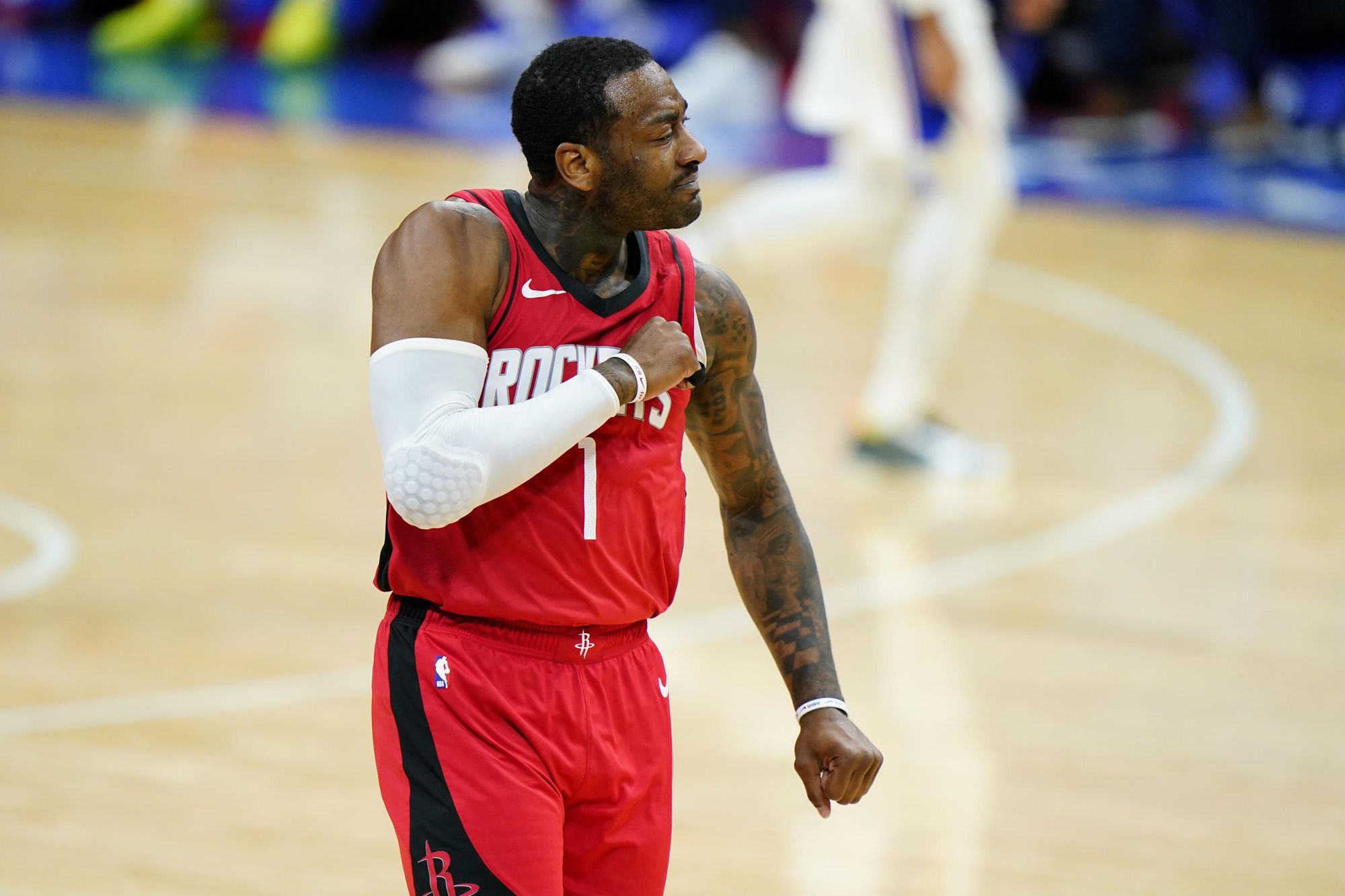 NBA Injury Report: Houston Rockets Star John Wall To Sit Out The Rest Of The Season

Rockets shut down Wall for the rest of the season

Houston Rockets star John Wall’s 2020-21 NBA season may have come to an abrupt end. The former All-Star point guard has suffered a hamstring strain injury, which could be enough to force him to sit out his team’s remaining games this season.

It is indeed an unfortunate end to Wall’s first year with the Rockets. After missing the entirety of the last NBA season due to a major Achilles injury, the Washington Wizards shipped him to Houston via the blockbuster trade that also landed All-Star point guard Russell Westbrook in the nation’s capital.

As per Tim MacMahon of ESPN, Wall has sustained  a Grade 2 hamstring sprain, and that usually takes about three weeks to recover from. The Rockets only have eleven games to play this season, so it is logical for the team to shut down Wall for the rest of the year, especially with them not in the hunt for a coveted ticket to the playoffs anymore.

According to sources, Wall's injury is a Grade 2 hamstring strain, which has a typical recovery time of approximately three weeks. With the Rockets eliminated from playoff contention, the team has no intention of rushing Wall back.

Wall, who has already notched five appearances in the NBA All-Star Game, is currently putting up an all-around stat line of 20.6 points, 3.2 rebounds, 6.9 assists and 1.1 steals per game. However, his shooting percentages dipped drastically this season, which is understandable because it has been almost two years since he last suited up in an NBA game.

Wall is only shooting a lowly 40% overall clip from the field, which is the lowest output of his career. He is also only putting up a 31% clip from beyond the arc, while logging in 32.2 minutes per contest. Still, Wall is actually performing beyond expectations. Prior to this season, many people expected him to mightily struggle, but Wall has definitely shut down his critics.

Wall’s on-court speed is again on display, and he is still one of the best playmakers in the league. His season-ending hamstring injury may have been unfortunate and not the fitting end to his return, but it is also true that the veteran playmaker has done a great job of remaining healthy for much of the Rockets’ campaign this season.

It also concludes his first year with the Rockets, a tumultuous string of events that he had to overcome in just the span of several months. In an interview with Fred Katzof The Athletic, Wall looked back at the time when he found out that he was going to be traded to the Rockets, something that he pointed out to as a very emotional day in his life.

“It was funny because I was supposed to (do a photo shoot) in the City Jerseys on Monday. And I was just like, I ain’t feeling — I just don’t feel like I’m gonna be here. In my mind, I feel like it’s gonna happen. Like, they gonna do something, because it just kept lingering for so long. And I’m like, if it was supposed to not happen, all you had to do was (be) like, ‘I appreciate you all calling for him, but John ain’t tradeable. We keeping him.’ That’s the same as if anybody was calling for Brad (Beal), because we know everybody is calling for Brad. They like, ‘Nah, he’s not tradeable. Brad is off the market.’ Once I realized they weren’t saying that (about me) and conversations kept going, I was, ‘OK, it’s gonna happen.’

With Wall as the latest addition to the Rockets’ health woes, the team’s injury report now includes veteran point guard D.J. Augustin (ankle), Sterling Brown (knee), Dante Exum (calf), Eric Gordon (groin) and David Nwaba (wrist). The Rockets have been plagued with tons of injuries on their roster this season, and it is no surprise that they have been dwelling in the bottom cellar of the stacked Western Conference standings.

On top of all these injuries, the Rockets are also dealing with a lot of new faces on their roster. First, they have a new coach in Stephen Silas, who has been in the NBA coaching circle since the 2000-01 season. Silas is the son of the famous Paul Silas, who was a fixture of a head coach in the league for a very long time.

After the Rockets lost Mike D’Antoni in the offseason, the team then hired Silas as their new head coach this year. Silas has not achieved much collective success in his first year as a head coach, but it is also true that he has been thrown in a situation that will prove to be very difficult to overcome even for long-time head coaches in the league.

As per Kelly Iko of The Athletic, Rockets general manager Rafael Stone emphasized how impressed he is of Silas’ performance this season. Stone said that Silas has met every expectation, and that he has always been consistent in the principles and in the system that he is pushing forward for the team to adapt into.

After the statement that Stone said, Iko also chimed in his thoughts as he said that Silas had to go through a lot of roster changes and also a change in the team’s collective vision and goals.

“Stephen’s been exactly who we’d hoped he’d be. He’s been great. The challenges, I don't think either of us foresaw. We’ve had an eventful year. One of the things we’re looking forward to is him getting a chance to implement his offense and defense with a combination of veterans and younger players. Hopefully, we get some consistency healthwise so he can get a sense of how our guys can do what he wants and can be successful in this. Very happy with Stephen as a person; he’s the best you can hope to work with. As a coach, he’s very resolute. His messaging to the team is consistent.”

The job Silas signed up for during the offseason and the job he has heading into  April are two very different things. It’s been a challenge for him to implement his style on both ends of the floor because of the lack of consistency on a day-to-day basis. Between the mounting losses and the hungry, engaged fan base, Silas’ name wasn’t all that popular for a while. But from the looks of it, he’s the man for the job and the ideal candidate to lead the team during a rebuild.

As for Wall’s future with the team, there is no doubt that he could be a fixture in this Rockets organization. Wall is just turning 31 years of age this September, and it seems like he has already overcome the major Achilles injury that forced him to sit out much of the past couple of years. He has started in all of the 40 games that he played for the Rockets this season, so there is a huge chance that he may still be part of the Rockets’ future even beyond this current campaign.

Wall, the first overall selection in the 2010 NBA Draft, spent nine seasons with the Wizards. It is with the Wizards that Wall grew into a household name in the league as he put up a career-best in 2016 when he averaged 23.1 points, 4.2 rebounds, 10.7 assists and 2.0 steals per contest. He would still notch another All-Star appearance the next season, but it was during the 2018-19 campaign that Wall would suffer a major injury that put an abrupt stop on his steady climb into one of the league’s elite two-way superstar point guards.

But with the consistent performance that he showed with the Rockets this season, the near future looks bright for Wall. Wall is still on his current contract for the next two years, although he can opt out of the deal in the summer of 2022. However, he is not expected to opt out of that deal, especially now that he is earning at least $40 million every year.

In the same column that Katz wrote for The Athletic, Wall also looked back on his time with the Wizards, and he expressed his regret that their partnership did not come to a good and fitting end. Wall reiterated he should have been more involved and aware of the Wizards front office’s plans before he was traded to the Rockets.

“I felt like I deserved the honesty and respect because I’ve been there for 10 years. I’ve been through the bad times, when we had shitty teams and when we had good teams in D.C.,” he continued. “I never turned my back on the organization. I played through damn near every injury that a lot of people wouldn’t have played through. I  played through broken hands in the playoffs. I think I did everything I could and  gave everything I had, heart and soul to the organization on and off the court.

“Then everybody kept telling me, ‘No, it’s not true. Don’t believe it. Don’t believe it.’ And I’m like, I know Houston probably called them first. But it’s part of the business. Why wouldn’t you call if somebody wants to be traded? You know what I mean? And it’s not nothing, just having conversations. And that’s all I wanted. If  you’re having conversations, that’s cool, I get it. Nobody could ever tell me the truth about it.”

As for the Rockets, there is no doubt that this has been a very disappointing year for them. They are currently sporting a lowly record of only 15 wins against 46 defeats, which is the worst win-loss slate in the league today. With all the injuries that they currently have on their depleted roster, it is not a secret that the Rockets may have to finish the season as the worst team in the NBA.

After their recent double-digit loss at the hands of Nikola Jokic and the Denver Nuggets, the Rockets will go up against the Minnesota Timberwolves, the Milwaukee Bucks, the Golden State Warriors, the New York Knicks and the Philadelphia 76ers to round out their very tough five game home stand.