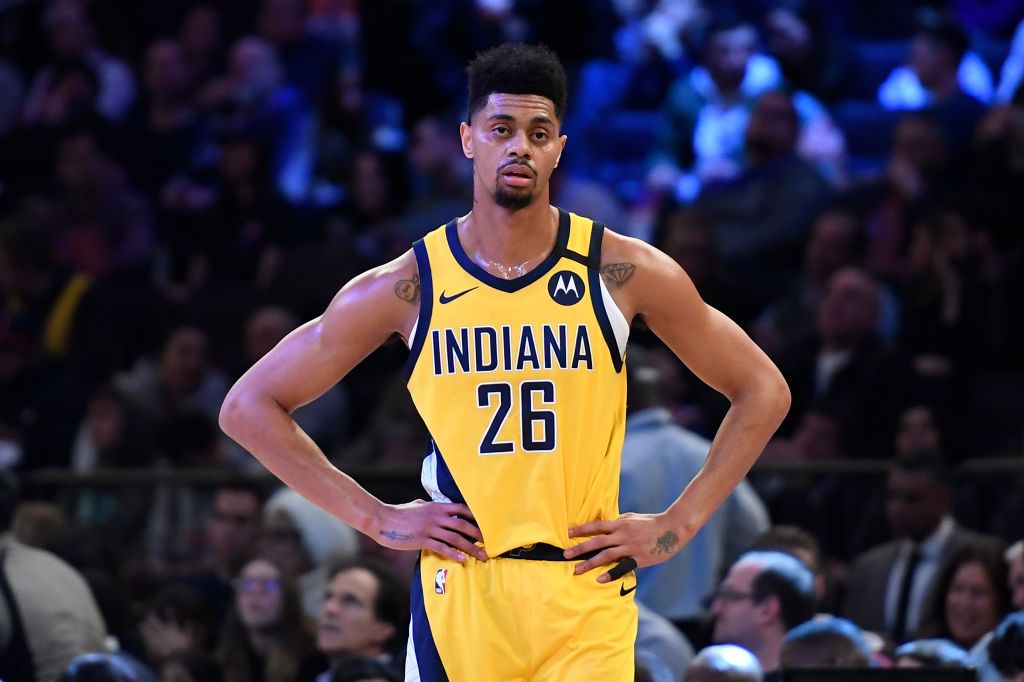 The Indiana Pacers suffered a huge blow as shooting guard Jeremy Lamb could be sidelined for the rest of the season. During a dunk attempt in the Pacers’ match-up against the Toronto Raptors last Tuesday, Lamb was fouled and landed very awkwardly on the floor. The veteran gunner was still able to hit two free throws before finally limping off the court. The results of his X-rays and MRI revealed a plethora of major injuries on Lamb: a torn ACL, a torn lateral meniscus and a lateral femoral condylar fracture. With all these injuries that Lamb sustained in that awkward fall, it is really mind-boggling how he was still able to get up on his feet and make those free throws.

Pacers back-up point guard T.J. McConnell was obviously downhearted by the situation, saying that he and his teammates had tears in their eyes when they heard the news from Lamb himself, as per Scott Agnes of The Athletic.

“Your heart just breaks for Jeremy. I was in utter shock when he came in and told us. I was not expecting that at all. Then all of us got up, went to comfort him in the training room. It was a pretty hard moment, all of us were pretty emotional tearing up a little bit. It was just really hard. You could tell it was hitting him pretty hard as it should. It was a difficult moment for sure.”

This is an absolutely heartbreaking setback for the team as Lamb has assumed a very important role in their rotation. He has filled in quite nicely in Victor Oladipo’s absence, tallying an all-around stat line of 12.5 points, 4.3 rebounds, 2.1 assists and 1.2 steals per game. Lamb has started in 42 of the 46 games he played this season, and has been relegated to a sixth man role due to the recent return of Oladipo to the active line-up.

Lamb’s timetable for a return to the court is yet to be determined. With two more injuries on top of his ACL injury, it is probable that he could be sidelined for more than a year. Of course, medical technology has been very helpful in shortening the recovery period of athletes from particular injuries. But there is no denying that it looks like Lamb will have a very long recovery process.

This setback may be very frustrating, but Oladipo knows that his teammate will bounce back from it. ‘Dipo just returned from a year-long injury layoff in which he rehabilitated his knee, and he knows that Lamb’s patience and determination will be put to test, as per Nathan Brown of IndyStar.

“We go through life, and when tough things happen, we say ‘I can’t imagine what you’re going through’, but I know exactly what he’s going through. I know his head is kinda all over the place. He’s just gotta embrace the process and trust it. He’ll come back just fine.

Without the scoring punch that Lamb provides every night, the Pacers will rely on their starting backcourt of Oladipo and Malcolm Brogdon to shoulder most of the workload. Sitting on a 34-23 record, the Pacers have positioned themselves in the sixth seed in the Eastern Conference. They have bounced back from the Raptors loss with a massive 39-point victory over the Charlotte Hornets.

The Grizzlies’ impressive athletic forward Brandon Clarke has sustained a right quad injury that keep him sidelined for at least two weeks. The young high-leaping big man suffered the injury during the team’s recent loss at the hands of the Los Angeles Clippers. Clarke even said that he felt two pops in his leg before calling it a night three minutes into his appearance in that Clippers game.

The 6-foot-8 rookie expressed his disappointment, lamenting how much the team needs his services with starting power forward Jaren Jackson Jr also out with an injury, as per Evan Barnes of The Commercial Appeal.

“I knew I had probably strained the muscle or something. It was disappointing, really. I knew my team needed me because obviously Jaren’s (Jackson Jr.) down.

It’s tough not being able to play with the guys. Obviously, I’m sad not to be able to have that fun for a while. I’ve been having a good season, so it’s a little bit upsetting, but that’ll just make the comeback even better.”

Clarke, 23, is having one heck of a debut season. Fulfilling a crucial role off the bench, Clarke is putting up decent averages of 12.0 points, 5.8 rebounds and 1.4 assists per contest, including a solid 62% overall clip from the field. He eclipsed the 20-point mark thrice this season, including a 27-point outing against the Portland Trail Blazers where he missed only two of his 14 shots.

Indeed, Clarke has been both effective and efficient when fielded on the court. Despite logging only 21.7 minutes per game, he has been contributing in a high level of production on both ends of the floor. Grizzlies first year head coach Taylor Jenkins says that it is disappointing to lose one key cog after the other, but emphasized that injuries are unavoidable in this league.

“There’s no magic recipe. We’ve got to roll with the guys we got, the depth that we’ve always trusted all season long. It really starts with just focus on our habits. No matter who’s out there, we got to play at a higher level. We got to play better.”

Unfortunately, the Grizzlies are not performing at their best as of late. They won four of their last five games before the All-Star break, but that proved to be the team’s last hurrah so far. After the break, Memphis lost each game in their four-game road trip. They go back home to a tough back-to-back schedule against the streaking Sacramento Kings and the West-leading Los Angeles Lakers.

Cavaliers young combo guard Dante Exum has sustained an ankle injury that will keep him out for a significant amount of time. The Australian hooper played only six minutes in their last assignment against the Miami Heat before he sprained his ankle and exited the game. The Cavs went on to pull off an upset victory over the Heat, although losing Exum depleted their line-up yet again.

Chris Fedor of cleveland.com wrote an update on Exum’s status.

“Meanwhile, backup guard Dante Exum, who exited Monday’s game with a sprained ankle, will miss an “extended period of time.”

According to Bickerstaff, Exum was using a crutch to get around Wednesday morning and there’s still some swelling in his ankle. Matthew Dellavedova will slide into Exum’s spot in the rotation.”

After spending the first four years of his career at Utah, the Jazz traded the 24-year old guard to the Cavaliers as an integral part of the Jordan Clarkson deal. Clarkson has been exceptional for the Jazz, and Exum hasn’t been shabby either. As a Cavalier, Exum even had a 28-point performance against the Minnesota Timberwolves, while making all of his four attempts from three-point territory.

Despite the early struggles of not being able to meet the expectations set for him, the former lottery pick still has the potential to be an impactful role player in the league. He can guard multiple positions with his lengthy 6-foot-6 frame, and he also has the mobility to go with it. For Exum, it all boils down to improving his consistency on both offense and defense, especially in terms of his shooting and decision-making.