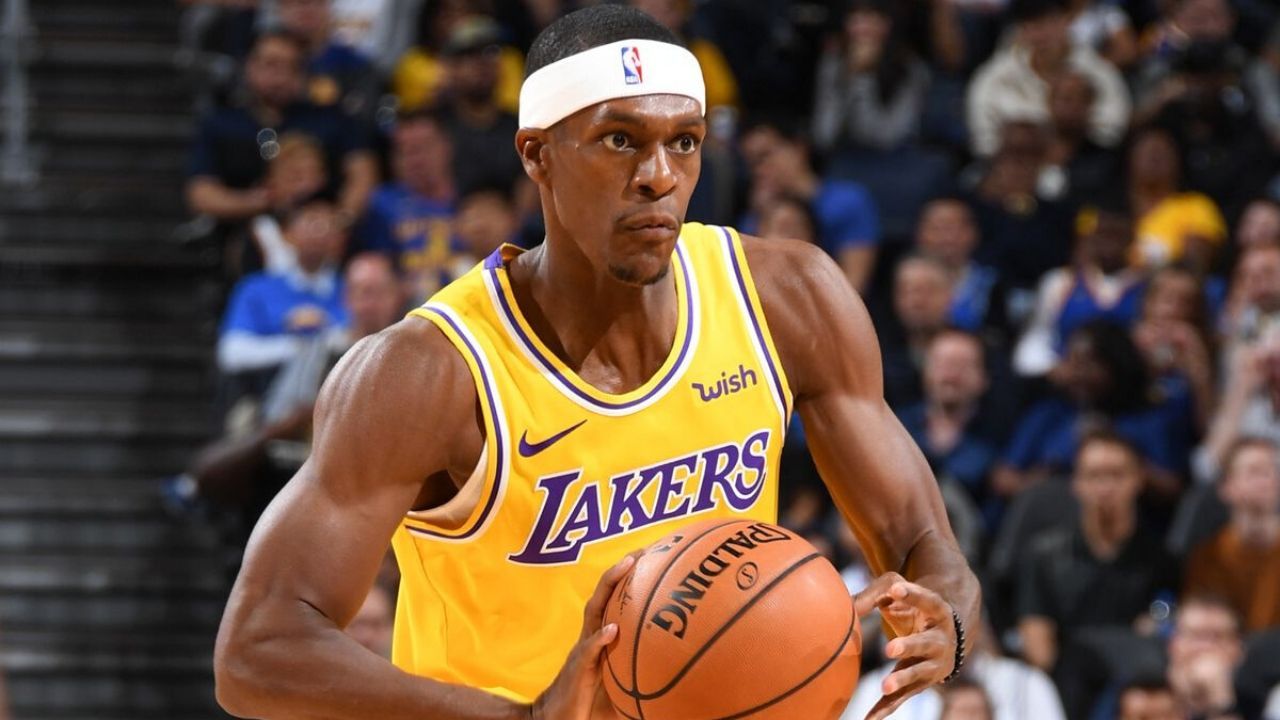 An unfortunate development for the Lakers made waves in the social media as veteran point guard Rajon Rondo sustained a thumb injury in practice. ESPN’s Malika Andrews and Dave McMenamin jointly reported on this disappointing setback for both Rondo and the Lakers.

Rondo will undergo surgery to repair the fracture this week, the team said.”

With Avery Bradley already opting to sit out the season restart at Orlando, Rondo’s absence is indeed a huge blow for them. Rondo may have been less efficient this year, but he is still the team’s main playmaker when LeBron James takes his rest. The veteran guard is also norming all-around numbers of 7.1 points, 3.0 rebounds and 5.0 assists off the bench, excellent indicators of Rondo’s value on the court.

Having said that, the Lakers are adamant that an injured Rondo can still be of essence for the Western Conference frontrunners. Head coach Frank Vogel told reporters that he will be allowing Rondo to help out on the coaching staff. After all, Rondo has always been known for his court smarts and vision, two important attributes for any aspiring coach. McMenamin has the report on this Vogel’s idea.

The 34-year-old will leave Orlando, Florida, to undergo surgery and begin      rehabilitation, according to Vogel. The point guard, known for his lofty basketball I.Q., will be welcomed as an unofficial member of Vogel's coaching staff while he's out, much the same way former Lakers coach Luke Walton incorporated Rondo into his staff when he was injured last season.

"We've been doing a lot with our outside-the-bubble staff, coaches, video guys," Vogel said. "[Such as] Kurt Rambis being able to observe practice over Zoom, be a part of coaching staff meetings over Zoom. I will definitely offer that type of insight or participation to Rajon if that's something he's interested in."

Vogel would also emphasize the team’s belief that Rondo will be able to come back in the middle of their playoff run. With a recovery timetable of six to eight weeks, Rondo will surely miss the rest of the regular season and maybe the entirety of the first round of the playoffs.

Without the playmaking duties that Rondo provide, it remains to be seen who among the Lakers backcourt players will fill in for the task. It is a sure thing that the team will not put too much burden on LeBron in the first few games, especially with the fact that players just had a few months of lull time.

It is also unsure if the Lakers could still bring a new player to add to the roster. LeBron’s former teammate at Miami, Mario Chalmers, recently offered his services to the Lakeshow. But Rondo’s absence could also be the golden opportunity for the Lakers’ other guards to step up. Alex Caruso should be the next man up, along with sharpshooter Kentavious Caldwell-Pope.

Then there’s also the fact that the team recently brought in scorers in JR Smith and Dion Waiters. Smith is the better shooter and defender, while Waiters is arguably the better shot creator and playmaker. They both present unique abilities to the Lakers, so Vogel has a good problem in his hands.

While talking to reporters last week, Vogel admitted that he is yet to make a solid decision on who between Smith and Waiters is he going to give more playing time to. (h/t SB Nation’s Silver Screen & Roll)

“Obviously both of them are super talented, and they can play and they can  contribute, and they can help. But we have a great deal of depth even without Avery on our team at the wing spot... Obviously with LeBron handling a lot of times as the  point guard, you can play a lot of shot-making wings with him. So we’re going to have versatility. I don’t know exactly where they’re going to fit in to a rotation, whether it’s going to be both of them, one of them, neither of them on certain nights, those answers will play out over the two, three weeks of training camp, scrimmages and seeding games. But they’ll have opportunities in those seeding games to show what they do, and how they fit into this group.”

The Lakers will be having themselves a very tough first assignment in the bubble as they go up against Kawhi Leonard and hometown rivals Los Angeles Clippers. Lakers stars LeBron and Anthony Davis were much-talked about in social media platforms as of late, mainly due to their decision to forego placing social justice messages on their jerseys.

But Lakers fans should not need to worry about this as the two stars can make their own personal decisions. Moreover, they are still the same beasts on the court and their primary focus is to win the championship.

After undergoing surgery on his right knee, it was reported that Oubre would not play for the Suns in the season restart. But there is now a growing possibility that the lefty versatile forward will don the sneakers and threads again this season. As per Duane Rankin of Arizona Republic, Oubre said that he is already ready to go physically but it is all about how he would approach the return from a mental standpoint.

Oubre suffered the knee injury during a Suns’ victory over Donovan Mitchell and the Utah Jazz last February.

"It's a mental thing. I'm more 90% mental, 10% physical. I'm strong, of course. I'm continuing to get stronger each and every day, but mentally, it's a lot thrown at me in a short amount of time for me to get out there and resume high level of playing as everybody expects of me.

I don't want to sell myself short. I don't want to sell the people who are across my chest and on the back of my jersey short. So therefore I have to continue to push myself (to the limit) each and every day to come back stronger than I was before or else I'll be doing myself a disservice. I understand a lot of people want to see me play, but at the end of the day, you'd rather see Kelly Oubre come (back) on top of his game than Kelly Oubre being mediocre. That's just where I'm at."

The setback couldn’t come at a worse time as Oubre was performing at a career-best pace this season. He is norming career-highs of 18.7 points and 6.4 rebounds per contest, along with a decent 35% clip from the three-point line. He has been a cornerstone for the Suns this season, and his absence should be a huge disadvantage for the squad.

Still, the Suns’ priority moving forward should be Oubre’s long-term health. The break could have given him the much-needed time to recover, but it is also true that the players are lacking in conditioning. Things cannot be rushed right now, especially in regards to Oubre’s case.

However, Suns head coach Monty Williams also put it out there that Oubre is looking great physically. He hinted out that the team is just waiting for the medical staff to give Oubre the thumbs-up for him to go out there and play.

He looks great. Kelly's one of those freak athletes. His body is durable. Looks great. He's got his bounce, but there's still some other benchmarks that I think he's got to pass before he can get back on the floor and start to scrimmage 5-on-5. I'm sure there's some layers – 1-on-1s, 3-on-3s, 5-on-5 – and catch up to where the other guys are."

If Oubre is given the green light to play, he can suit up for the Suns when they face the Washington Wizards for their first task in the Orlando bubble.