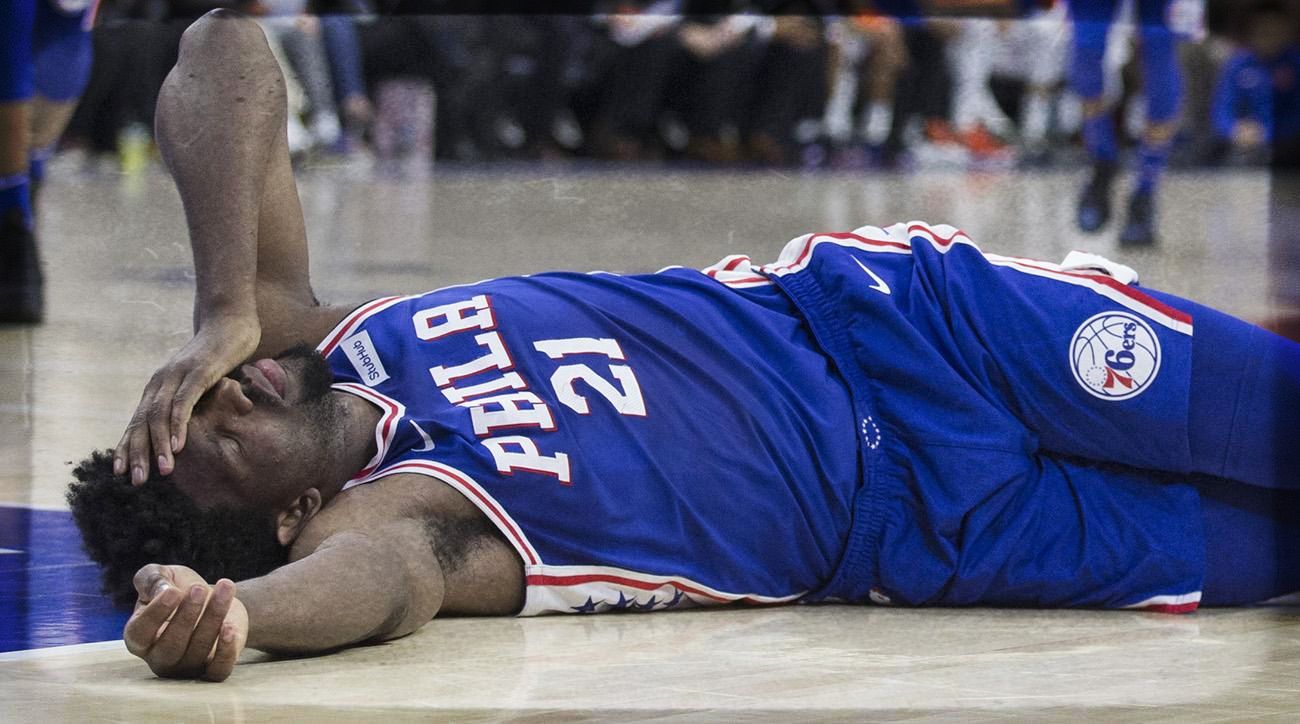 Drafted 3rd overall during the 2014 NBA Draft, Embiid didn’t play in the league until the 2016-17 season because of multiple knee and foot injuries. This is the reason why Sixers fans held their breath when the team recently sidelined the All-Star center, citing ‘knee soreness’ as a primary reason. But the good news is that Sixers head coach Brett Brown said that Embiid has actually returned to practice, and will be out there on the playing court soon, per Dave Uram of the 94WIP Sports Radio.

“He just doesn’t feel like he’s ready to go. He really does feel restricted with some of  his movements. There’s a little bit of soreness I think still. You could see in this  practice environment that he hasn’t played for a while. It is what it is.”

“I can tell you what I saw today in practice,” Brown said, “you could tell that he has  not played basketball in a while.”

Embiid, who is posting incredible averages of 27.3 points, 13.5 rebounds, 3.5 assists and 1.9 blocks this season, has missed the team’s last five games. While the knee injury is not really a significant one, Embiid cited ‘preservation’ as a cause for his absence, via ESPN’s Tim Bontemps.

"It's all about long-term preservation and making sure I'm ready not just for the playoffs, but also for the next 15 years. Knowing the team, what we've been through, and knowing me and I like to push everything, I like to play through anything. We   just felt like it was better to preserve.”

The Sixers are currently standing at the 4th spot in the Eastern Conference, facing a possible powerhouse first-round match-up with fifth-seeded Boston Celtics.

The 21-year old Ball, who is averaging 9.9 points, 5.3 rebounds and 5.4 assists this season, hasn’t played a game for the Lakers since they lost to the Houston Rockets last January 19. Initial reports predicted that Ball will miss at least a month due to an ankle sprain, but the sophomore point guard is still to return to playing duties. Spectrum’s Mike Trudell says that, “Ball will require more time to recover from a bone-bruise that is related to his ankle sprain and will be re-evaluated in about a week.”

With the Lakers in the midst of the most important stretch of their season, Ball’s defense and playmaking are sorely missed by the team. LeBron James himself sounded off on Ball’s absence, per the Los Angeles Times’ Broderick Turner.

"We obviously miss another ballhandler, another playmaker. A guy that's very, very good defensively. With his ability to get a steal and pressure the offensive point   guard and then push the pace for us, get into our early offense. So we miss that a lot."

The injury was a very unfortunate circumstance for Ball, who has been hitting his offensive stride before he was sidelined. Not really known for his scoring, Lonzo stepped up on the defensive end when LeBron got injured, hitting multiple three-pointers and racking up more assists than ever. It’s no secret that the Lakers’ weakness lies in their team defense, and it’s not a coincidence that the team is struggling on that end while Ball is on the sidelines.

Thompson has missed the Warriors’ last two games against the Philadelphia 76ers and the Boston Celtics. While his MRI results returned clean, Klay is expected to be a day-to-day decision for a return to the active roster. Warriors head coach Steve Kerr says that the All-Star shooting guard sustained a minor knee injury during a recent loss to the Orlando Magic, per CBS Sports.

"He hurt it during the [Orlando] game; he banged his knee on the floor. It didn't  really hurt him until [Friday] morning. It's inflamed enough where it doesn't make  sense to play him tonight, and our docs will check him out [Sunday] when we go back."

Thompson, who is putting up 22.0 points and 3.9 rebounds per game this season, is actually not on the official injury report. There’s still a high possibility that he could suit up for the defending champs when they face the 2nd-seeded Denver Nuggets on Friday.

Arguably the most consistent frontcourt player for the depleted Pacers team, the extended absence of Sabonis could hurt them in this stretch and cost the team the 3rd spot in the East. Sabonis is still recovering from an ankle injury, and has missed Indiana’s previous four games. Pacers head coach Nate McMillan confirmed that the Lithuanian big man is yet to re-join the team in practice, per CBS Sports.

"Normally we try to get guys into a practice before they play, but it really depends  on the schedule. He hasn't done anything with the team, no activity. He hasn't been running."

With star shooting guard Victor Oladipo already ruled out of the season, the Pacers can’t afford to lose another key player to a long-term injury. They are currently holding on to a 42-23 record, with the Sixers closing in on them in the standings. The Pacers are only a half-game ahead of Philly for the 3rdseed in the East.

How good would the Thunder be if they had Roberson active on the roster this season? The defensive ace sustained a major knee injury last season, forcing him to sit out that year. Things turned out worse when Roberson suffered another setback in his recovery last October, forcing him to opt for a knee surgery that has kept him out until today. His ability to defend positions 1-4 has been widely-talked about across the league, and it’s a shame that the Thunder could not benefit from his services this season.

However, NewsOK’s Maddie Lee brought positive light on Roberson’s recovery last week, saying that the combo forward is making significant progress and could even return to the active roster come playoff time.

“Andre Roberson sifted along the 3-point line, launching shots after shootaround   Tuesday. He wore a black sleeve over his left leg, compressing the knee that he’d had multiple operations on since rupturing his patellar tendon 13 months ago. Thunder coach Billy Donovan reiterated Tuesday that he does not have a timetable for Roberson’s return, but the team is optimistic that he could be able to return at some point this season.”

Fortunately for the Thunder, the excellent performances of young forwards Terrance Ferguson and Jerami Grant have given them enough cushion to take the blow of losing Roberson. The Thunder is currently sporting a 39-25 record this season, good for the 4th spot in the stacked Western Conference and a possible homecourt advantage at least in the first round of the postseason.

Bagley’s recent knee injury is as a wrong timing as it gets. The Kings are in the middle of bolstering their playoff hopes and the rookie forwards is in the midst of the most productive stretch of games of his maiden season. Shams Charania of The Athletic reported on the latest update on Bagley’s condition:

“Kings rookie Marvin Bagley III has a sprained left knee and will be re-evaluated in   1-to-2 weeks. Sigh of relief after a scary injury for Bagley.”

The 19-year old Bagley is averaging 13.9 points and 7.2 rebounds for the young Kings team this season. He has been playing his best basketball in February, putting up a career-high 32-point outing in a win against the Phoenix Suns, and a double-double of 28 points and 14 rebounds in a two-point defeat against the Golden State Warriors. The Kings have been one of the most surprising teams this year, sporting a 32-31 record and are only three games behind the 8th-seeded San Antonio Spurs in the West.

VanVleet has been the most reliable sixth man for the 2nd-seeded Raptors. His ability to make plays at both ends of the floor and his 37% clip from beyond the arc have boosted Toronto’s already-excellent roster depth. But he has missed the team’s last eight games due to a thumb surgery he underwent in February 13. Charania reported on that setback.

VanVleet is posting career-highs of 10.5 points, 4.6 assists and 2.7 boards this season. His extended absence has prompted the Raptors to sign buyout candidate Jeremy Lin, while they also shore up their frontline with the acquisition of Marc Gasol from the Memphis Grizzlies.

While it could be safe to assume that VanVleet will be back in the playing court in a couple of weeks, it remains to be seen how he and Lin co-exist on the backcourt.