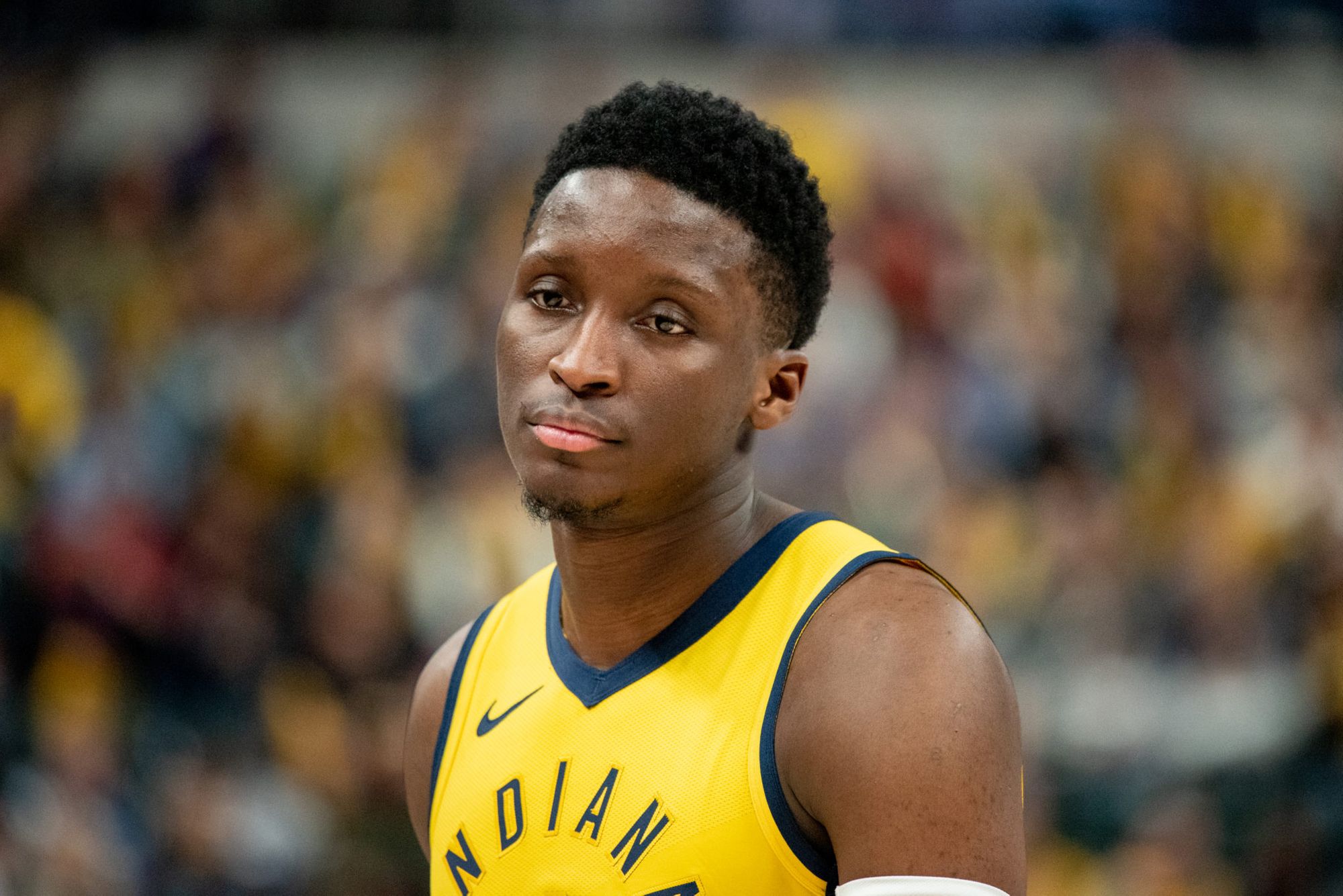 Pacers will field in Oladipo during scrimmages

All signs point towards Indiana Pacers star guard Victor Oladipo playing in the season restart. With the resumption of games just nine days away, Pacers head coach Nate McMillan said that they are planning to field in their All-Star shooting guard in the team’s upcoming tune-up game against Damian Lillard and the Portland Trail Blazers on Thursday.

As per ESPN’s Eric Woodyard, McMillan emphasized that he doesn’t seen any restrictions within the Pacers roster, and that includes Oladipo.

Indiana Pacers guard Victor Oladipo is still reconsidering his decision to opt out of  the NBA's restart, but coach Nate McMillan expects to see him in the lineup for the team's first scrimmage this week.

"I do. He's going through the practices and he's looking good," McMillan said. "Our  first scrimmage is Thursday and we'll see how our guys feel and get them minutes accordingly. Right now, there is no restrictions on anyone."

After the team initially announced that Oladipo will be sitting out the restart, the two-time All-Star sent shockwaves to Pacers fans when he emphasized that it has always been his plan to get into competitive shape and play in the restart.

‘Dipo only played 13 games this season, a result of his year-long recovery from the major injury he sustained last year. He was getting into his groove when it was halted by the fact that the NBA suspended the games last March. It was understandable why Oladipo hesitated to play in the restart, considering that there is a high chance that he might re-aggravate the injury that he just recovered from.

But Oladipo emphasized that he is still evaluating where his body will stand, and how ready he could be when the games officially start. In the same column written by Woodyard, the 6-foot-4 two-way star reiterated his competitive desire to always help his teammates on the court and win.

"At the end of the day, the only thing I'm concerned about is my team, my knee and being able to make sure that I can perform and help them at the highest level possible in this organization right here. So, that's all I'm focused on. I'm taking it one day at  a time, reassessing it every day and from there I'll make my decision.

In the 13 games that he played this season, Oladipo is putting up a decent stat line of 13.8 points, 3.2 rebounds and 3.0 assists. The seventh-year guard is also struggling to be efficient with his shots as he is only norming an overall 39% clip from the field, including a lowly 30% from the three-point line. Both of these percentages are his career-lows, definitely a far cry from his All-Star self.

Still, Oladipo’s presence would be a big boost for the Pacers. They are already without the injured Jeremy Lamb, their main scoring punch off the bench. This is also a golden opportunity for the Pacers to try out the backcourt partnership with Oladipo and point guard Malcolm Brogdon. If they would click as a tandem, ‘Dipo’s future could be safe in Indy. It’s worth noting that he is set to become an unrestricted free agent in the summer of 2021, prompting speculations that he could be traded next season.

The New York Knicks may not be playing in the season resumption at Orlando, but they are still busy making their own moves for the future. As they continue to be open in their list of head coaching candidates, Marc Berman of the New York Post reported that Tom Thibodeau is already doing some work analyzing Knicks’ videos and films.

The former Chicago Bulls and Minnesota Timberwolves head coach is believed to be the leading candidate for the job, and it seems like Thibodeau believes in that too. Berman wrote that Thibs is already waiting for a job offer, which gives Knicks fans the hint that the team’s front office is highly considering the 62-year old coach for the position.

“While five of the Knicks’ 11 coaching candidates are in the Orlando bubble game- planning for the NBA restart, others such as Tom Thibodeau are waiting on Knicks president Leon Rose’s decision a different way.

Thibodeau, considered the leading candidate, is passing away the time poring over  Knicks game film as he awaits a possible job offer, according to an NBA source.”

Thibodeau’s last coaching stint was with the 2018-19 Wolves squad. He spent almost three seasons in Minnesota, before the widely-documented Jimmy Butler fiasco eventually led to him being fired.

But Thibs’ finest days as a coach was with the Bulls. He helped groom a young Derrick Rose into an MVP-caliber player, and built a defensive-minded Bulls squad that made the playoffs year in and year out. Thibodeau compiled an excellent coaching record of 352 wins against 246 defeats in his eight-year head coaching career. Before he was hired by the Bulls in the summer of 2010, Thibodeau was an assistant coach since 1989, fulfilling the role for the Timberolves, San Antonio Spurs, Philadelphia 76ers, New York Knicks, Houston Rockets and Boston Celtics.

In that same column written by Berman, Thibodeau’s comments during a B.J. Armstrong-hosted podcast was also included. The heavily-credentialed coach talked about the NBA’s evolution to a pace-and-space offense, and how efficient it could be when employed correctly.

“The game never stays the game — it’s always evolving. What wins still goes back to who you are as a player and what you do well. If you’re a great 3-point shooter, you try to get as many of those shots as you can. If you’re a good driver, get in the restricted area. A guy like [Jimmy] Butler, when we got him to Minnesota, I knew we’d have a great offense because of his penetration and decision-making and his very   high-percentage shots.

It’s playing to your strengths and playing smart. You want to shoot a high-volume shots like the corner 3. It’s how do you create those shots. Figuring out what your players do well and finding a system that will work effectively for them gives you the best chance of winning. What gets misconstrued, if you take the wrong shots, low- percentage shots, it compromises your defense. It’s not the high volume [of 3’s]. It’s the             efficiency of the high volume.”

But the Knicks’ coaching search is not just confined to one name. A young coach in Kenny Atkinson has propped up the radar and is slowly climbing to the top of the list. Atkinson led a young Brooklyn Nets squad to the playoffs last year, but was surprisingly fired this season. In spite of that unfortunate development, there is no denying that Atkinson is still highly regarded within the league.

The time is ticking for the Knicks as team president Leon Rose reiterated last month that they are aiming to have a coach in place at the end of July. In an interview with MSG Network’s Mike Breen, Rose said that they looking for an excellent leader and player development coach. (h/t ESPN’s Malika Andrews)

"We're looking at a lot of different people with a lot of different mindsets,     philosophies. And for me personally, this is educational, and I need to make sure that we go through this process and we dot every 'I' and cross every 'T' in order to make the right decision.

We want to find the right leader that can develop our young players as well as hold everyone accountable. And take us from development to becoming a perennial winner. We also want someone that we think will be collaborative with the front office and someone that when you're in that huddle and when you're looking at that coach's eyes, every player who's looking at him knows that person is driving the ship and  going to get the job done."

Aside from their coaching hunt, Rose and the rest of the Knicks front office have an important decision to make regarding their roster. They have a solid shot at landing a Top 5 pick in this year’s draft, and many experts predict that they will trade up the draft just to be able to select the 6-foot-8 point guard LaMelo Ball.