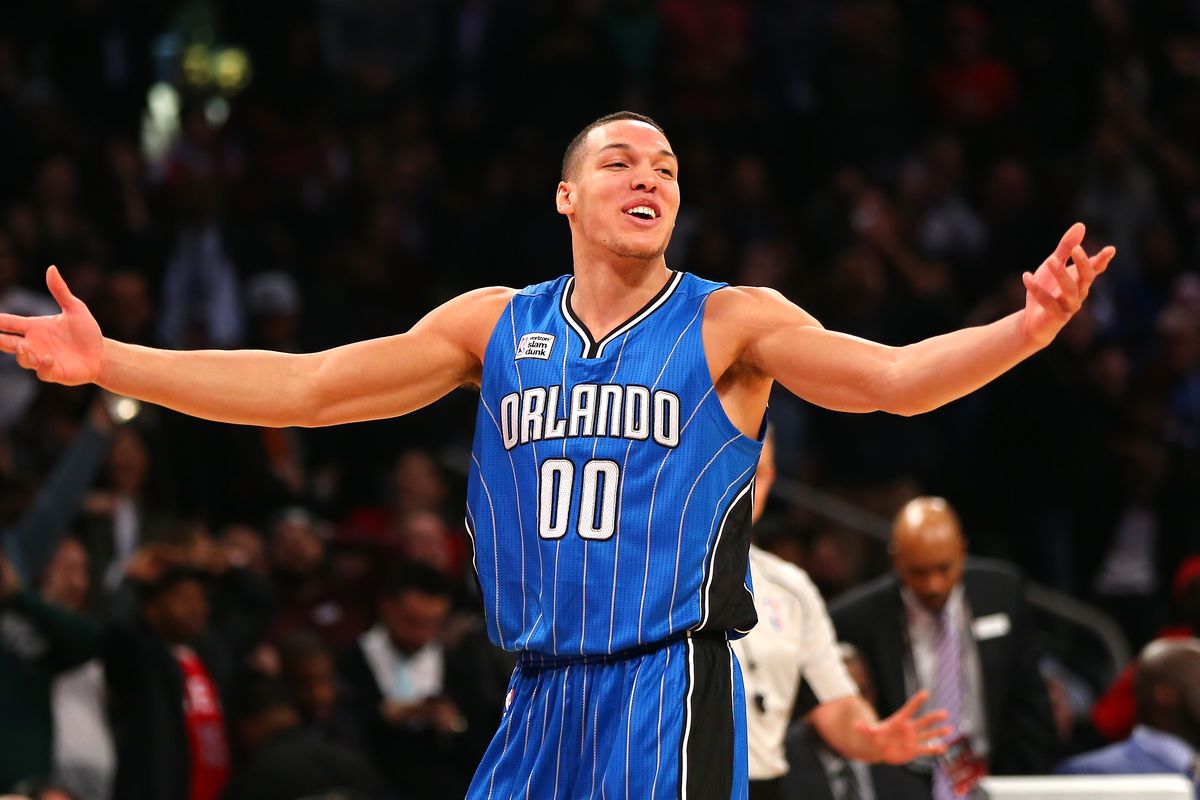 The Dallas Mavericks are reportedly looking for a third star to pair with Luka Doncic and Kristaps Porzingis. They have the option to trade for one this offseason or wait next year when several free agents become available in the market. They are reportedly eyeing Giannis Antetokounmpo next year, but it remains to be seen whether or not the two-time Most Valuable Player will consider signing with the Mavericks.

Antetokounmpo is expected to stay with the Bucks for the entirety of next season, which would put interested teams on wait-and-see mode. The Mavericks are reportedly eager to add a marquee player to compete next year, which means they need to look for a deal that would not hurt their cap space in next year's free agency. According to Sam Quinn of CBS Sports, one logical option for the Mavericks is Orlando Magic forward Aaron Gordon.

Gordon has been mentioned in numerous trade rumors, although the Magic have yet to show intention to trade the athletic forward. Quinn said that getting Gordon would put the Mavericks in a win-win situation because the 25-year-old forward would address the defensive void of the Mavericks. The former Arizona standout is versatile enough to guard faster forwards in the league, which was a problem of Porzingis last season.

"A bigger-ticket item on this front would probably be Aaron Gordon," Quinn said of Dallas trading for Gordon. "He'd fill the voids on defense and in terms of front-court athleticism, but brings that extra dash of ball-handling and passing that Rick Carlisle loves in his role players."

Quinn added that acquiring Gordon will also not hurt their chances of landing a bigger fish in free agency next year. The high-flying forward still has two years left in his contract. But in the event the Mavericks get a verbal agreement from Antetokounmpo or another major free agent in 2021, Quinn said that Dallas will not have a hard time trading him. If they fail to land a marquee free agent, Gordon would still be a factor for them in the seasons to come.

"He expires in 2022, but is obviously enormously tradeable if Dallas needs to create space," Quinn said. "His salary declines by almost $2 million for the 2021-22 season. If Dallas makes a splash trade this offseason, this is the sort of player to target: a non-star that fits their needs, their timeline and their cap sheet. The Mavericks could  move him if Giannis gives the thumbs up. If not? They could hold onto him, use their significant non-max cap space elsewhere and still feel great about their future."

Aside from Gordon, the Mavericks are continuously being linked to Los Angeles Lakers forward Danny Green. The Mavericks were very interested in Green last year when he became a free agent, but the Lakers beat them in the race for the veteran forward. Green might be available in trades this offseason, and Quinn believes that he would be a great addition to the Mavericks without hurting the cap space for 2021.

Green averaged 8.0 points and 3.3 rebounds for the Lakers last season, and drew flak for his inconsistencies in the playoffs. The Lakers might look for another scorer this offseason in the hopes of successfully defending their title next season. Quinn said that the Mavericks might be able to acquire Green if they offer Tim Hardaway Jr. to the Lakers. Hardaway averaged 15.8 points and 3.3 rebounds per game last season.

"Here's the easiest trade on the board: Hardaway for Danny Green," Quinn said. "Dallas pursued Green in free agency last offseason but came up short. The Lakers need a third scorer. Green's shooting numbers declined last season, but he has historically been quite good behind the arc, and remained a defensive difference-  maker last season. Both are on expiring deals."

Quinn also added that the Mavericks should keep an eye on Patrick Beverley. The Clippers are reportedly looking for an upgrade at point guard, which could make them decide to part ways with Beverley. If Beverley becomes available, Quinn thinks that he would be a great addition to the Mavericks, and the defensive-minded point guard is unlikely to hurt their chances of landing a big-name free agent next year.

Meanwhile, Zach Lowe of ESPN revealed that the Mavericks are also being tagged as a possible landing spot for Utah Jazz center Rudy Gobert. The veteran center could provide a huge defensive presence for the Mavericks, as he is known as one of the best defensive players in the league. However, Lowe thinks that it does not make sense at all for the Mavericks because Gobert is too expensive.

"Several rival executives have pitched the Mavs as a trade destination for Rudy  Gobert, who is eligible for a supermax," Lowe said. "I get the thinking -- a rim-running center to stabilize Dallas' shaky defense -- but I can't get there. Devoting $65 million combined to Gobert and Porzingis when the latter needs to play a good chunk at center is not optimal."

It could be argued that Gobert might eventually become an attractive piece in a possible sign-and-trade for Antetokounmpo next year, but Lowe believes that a possible rebuilding team like the Bucks would rather have Porzingis than the Jazz center. Lowe added that if they Mavericks want to add another marquee player without hurting their cap flexibility, they should consider trading for Victor Oladipo.

Oladipo has been a favorite topic of trade chatters this offseason after reports previously indicated that he wants out of the Indiana Pacers. While he has already denied that he wants a trade, Oladipo is expected to be mentioned in rumors moving forward because he is a tradable asset. Oladipo could become a free agent next year, which means the Pacers might decide to trade him instead of losing him for nothing.

The Dallas Mavericks are also being linked to a possible trade for New Orleans Pelicans guard Jrue Holiday. Recent reports indicated that the Pelicans are already shopping Holiday, and they are getting interests from title contenders. It is no surprise that contending teams are pursuing the veteran guard because he has the skills to make a difference for teams who are expecting to go deep into the playoffs next season.

According to William Guillory of The Athletic, the Mavericks are one of the teams that have a "strong chance" to acquire Holiday. Guillory thinks that Holiday would be a good fit with Luka Doncic in the backcourt. He also pointed out that the Mavericks could offer Seth Curry and Tim Hardaway Jr. to the Pelicans, but they might need to look for draft assets to convince New Orleans.

"The Mavericks need a third guy like this, and he’s the exact type of playmaker on both ends of the floor," Guillory said of Holiday. "I don’t know what a deal looks like here, but it might have to include someone like Tim Hardaway Jr. and Seth Curry. Mavs fans may bristle at this, but THJ gives cap relief a year earlier and Curry gives the Pelicans some real value in return. Mavs owe two future picks to the Knicks, so finding future picks in a trade package could be tough. I’d say the Mavs getting involved in talks is highly likely."

However, the Mavericks will not go unchallenged because Guillory thinks that the Brooklyn Nets are also a team to watch in the race to acquire Holiday. The Nets are also looking for a third star to pair with Kyrie Irving and Kevin Durant, and Guillory feels that Holiday is a great fit. The 30-year-old superstar could play off the ball and still be effective, especially on the defensive end of the floor.

And as for the tradable assets, the Nets have a lot to offer, which might be very enticing to the Pelicans. Brooklyn could offer one or two of their young players and future picks. Guillory thinks that the Pelicans would prefer getting a young player with oozing potential, considering that they are relying on their young core led by Zion Williamson and Brandon Ingram. Guillory also cited the front-office connection between the two teams.

"The Nets will likely try to keep LeVert out of any trade talks that they can, but he is another talented young player Pelicans executive vice president David Griffin could  put in a core that includes Zion Williamson, Brandon Ingram and Lonzo Ball," Guillory said. "Pelicans assistant general manager Trajan Langdon came to New Orleans after serving under Sean Marks in Brooklyn, giving the Pelicans some insight into the Nets’ situation."

Holiday is coming off a strong year after posting 19.1 points to go along with 6.7 assists and 4.8 rebounds per game last season. He might be the odd man out in New Orleans because of his age, but it is also worth noting that new Pelicans head coach Stan Van Gundy is a defensive-minded coach, which might be a factor on whether or not the franchise will decide to trade away Holiday, who is one of the best perimeter defenders in the league.