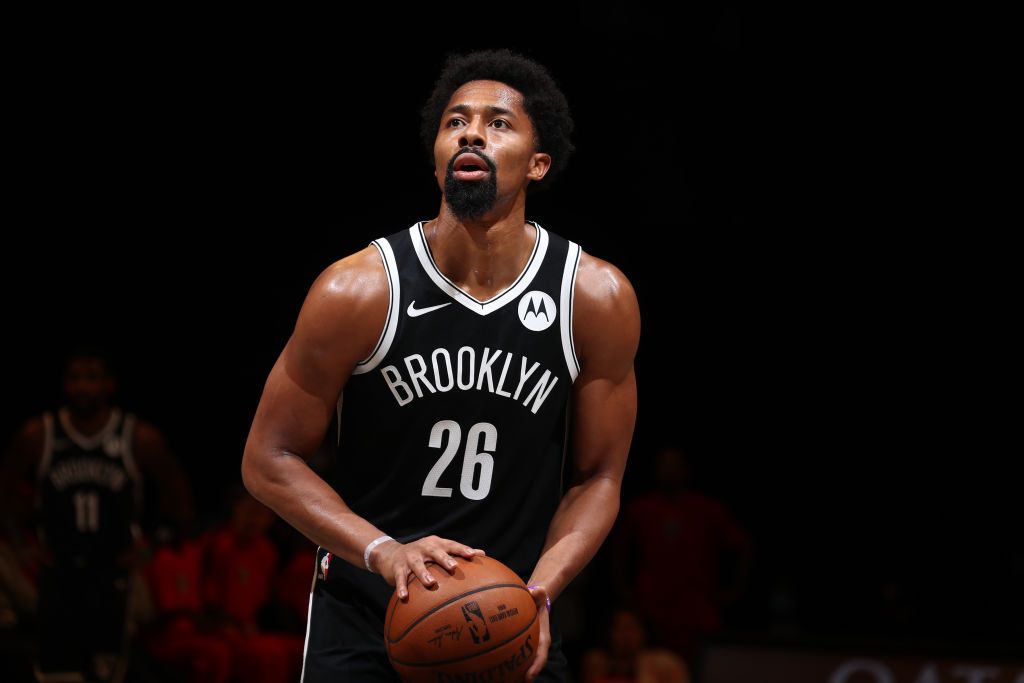 Dinwiddie may be on the move before trade deadline

Combo guard Spencer Dinwiddie may not have the golden opportunity to play alongside the Brooklyn Nets’ new superstar trio. Dinwiddie, who has emerged as an excellent scoring guard in the past couple of years, has logged in only three games for the Nets this season. He is currently on the mend as he recovers from an ACL injury that will force him to sit out the entirety of the 2020-21 season.

Dinwiddie, who spent the first two years of his NBA career with the Detroit Pistons, has been with the Nets for the past five seasons. He is coming off a career-best year in which he put up impressive numbers of 20.6 points, 3.5 rebounds and 6.8 assists per contest, an outstanding stat line that garnered him consideration for a coveted All-Star appearance.

With Kyrie Irving missing most of the season last year, along with the fact that Kevin Durant redshirted the campaign to recover from an Achilles injury, it was Dinwiddie who held down the fort for the Nets and pushed them to a playoff ticket. But with those two superstars now healthy, plus the arrival of former Most Valuable Player James Harden, Dinwiddie is now an expendable trade asset for the Nets.

With that said, ESPN’s Tim Botemps joined fellow ESPN insider Adrian Wojnarowski to talk about Dinwiddie’s dimming future in Brooklyn. Via The Woj Pod podcast, Bontemps emphasized on the Nets’ need for more defensive presence, and that they could get that by shipping Dinwiddie before the trade deadline, which Wojnarowski eventually agreed upon.

Bontemps: “While Spencer is a really good player ... who could eventually be part of that team going forward .., If they could add a piece that would help this this year, especially if it’s a good player who could help them on the defensive side of the Court. I think they have to look at doing that.”

Wojnarowski: “Spencer Dinwiddie in Brooklyn. There are teams that would like to get his Bird Rights. He’s out for the season with a knee injury but you trade for him now and then you can re-sign him. You might be a team without space or a team who just thinks we’ll use his Bird Rights to sign him to a longer term deal in the off-season. I still think the Nets could get something for him before the trade deadline next  week.”

With Irving, Durant and Harden all in town, it’s perfectly understandable why the Nets front office would approach this season on a win-now mentality. They are fresh off the signing of six-time All-Star Blake Griffin, who was released by the Detroit Pistons via a buyout agreement.

It is also true that the Nets have been bringing in tons of new faces to solidify their roster depth. They auditioned veterans like Iman Shumpert and Andre Roberson, an effort to possibly fill in for the role of a lockdown defender. However, both of those names are already removed from the line-up.

The Nets also brought in lefty gunner Tyler Johnson, a combo guard who can score and make plays for his teammates. Johnson also plays decent defense on the other end of the floor, and he brings in intangibles and hustle to the table. However, Johnson is still not the versatile defender that the Nets can count on to stop the opposing teams’ perimeter stars.

On top of all these, the Milwaukee Bucks recently completed a trade for P.J. Tucker, one of the most coveted defensive-minded stalwarts in the trade market. As per Michael Scotto of Hoops Hype, it is almost a sure thing that Dinwiddie will be declining his player option with the Nets to enter unrestricted free agency this offseason. Scotto pointed out that shipping Dinwiddie would net the Nets a quality role player, instead of just letting him walk for nothing in free agency.

Dinwiddie can be obtained for a role player off the bench who can contribute this season as Brooklyn chases a title and a future second- round pick, league sources told HoopsHype.

According to executives around the league who spoke with HoopsHype, the belief is a team that is over the cap would make the most sense to trade for Dinwiddie because the team would be able to monitor his rehab progress from a partially torn ACL and acquire his Bird Rights, which would allow him to be signed while going over the salary cap. Should the Nets retain him past the trade deadline, which Brooklyn is open to doing if the right deal doesn’t come along, they’ll have the flexibility to work out a sign-and-trade this offseason with his agent, Jason Glushon, and another team.

So if the Nets front office indeed pursue an avenue where they will eventually move Dinwiddie before the trade deadline, which names will the team target in potential deals? Aside from a lockdown perimeter defender, the Nets would also want to bolster their frontcourt depth.

DeAndre Jordan is not the ultra-efficient big man that he was during his Los Angeles Clippers days, while sophomore center Nicolas Claxton is still a young talent who needs more experience to come up big, especially during the more important games in the playoffs.

In a discussion by Alex Schiffer and John Hollinger for The Athletic, Hollinger himself mentioned numerous names which the Nets could potentially target in trade negotiations that will involve Dinwiddie.

Well, the Nets have millions of reasons to pursue a trade of Dinwiddie for somebody who makes less money rather than adding somebody in a buyout who increases the payroll. They also would likely prefer to have that roster spot for a participating player. So I do think they are incentivized to look at Dinwiddie trades.

I’d say Mason Plumlee and J.J. Redick are two of the more plausible targets for Brooklyn in terms of sending Dinwiddie out and bringing back a player. The other two that come to mind for me are 1) trading him to Indiana for Doug McDermott, which would save the Nets several millions in luxury tax and bring back a Joe Harris Lite shooter off the bench, or 2)   trading him, Timothé Luwawu-Cabarrot and Shamet to Orlando for Evan  Fournier and Khem Birch, which would have the opposite financial impact but return a more threatening offensive player and a defensive center.

Mason Plumlee, who is putting up career-best averages of 10.2 points, 9.5 rebounds and 3.6 assists per game for the Detroit Pistons, will be a solid addition to the Nets’ frontcourt. Plumlee is an outstanding rebounder, and he also has the court smarts to be a decent playmaker on the post or off the elbow.

On the other hand, JJ Redick has long been rumoured to be interested in a move to the East Coast. The New Orleans Pelicans veteran shooting guard is only logging in 18.6 minutes this season, his lowest average since his third year in the league. He is still shooting a decent 36% clip from the three-point line, but it’s already obvious that the best years of his career are already behind him.

Will the Nets trade for JaVale McGee?

As mentioned before, one of the weaknesses that the Brooklyn Nets want to cover is their depth in the frontcourt. Aside from the possibility of trading for Detroit Pistons’ Mason Plumlee, another name being floated around is that of Cleveland Cavaliers veteran big man JaVale McGee.

McGee, who won the 2020 NBA championship with the Los Angeles Lakers, is now on his first year with the Cavaliers. The 33-year old veteran center is currently putting up 7.8 points, 5.0 rebounds and 1.2 blocks per contest. These are very efficient numbers considering that he is only logging in a limited amount of playing time for the Cavaliers.

As per Alex Schiffer of The Athletic, he emphasized that a potential addition of McGee would make perfect sense for the Nets. However, he also pointed out that the team might not have the assets to entice the Cavaliers to let go of McGee. That means that the Nets might have to wait for the Cavaliers to possibly buy out McGee’s contract this season.

If he gets bought out, absolutely. I’m not sure the Nets have the assets to land him in a trade unless another team is involved. JaVale McGee makes  more sense to me than Andre Drummond because he has extensive playoff experience, three championship rings and is a stretch five instead of a traditional one like Jordan. He gives the Nets more options down low than Drummond would and has played with Durant in Golden State when Nash was there. McGee can handle the ball and isn’t limited to guarding bigs the way Drummond and Jordan are. If he is traded, his $4 million contract would also fit quite nicely into one of the Nets’ two exceptions and make him a low-risk, high-reward addition.

Having said that, it is clear to everyone that McGee is still highly-valued in the trade market. He already has a couple of championships under his belt, and he has grown to have a decent jumper in his bag of tricks.

On top of all these, McGee is a high-level role player who rarely commits mistakes and errors in terms of positioning himself on offense. He does not take tough-contested shots, and that is indicated with his high field goal shooting percentages.