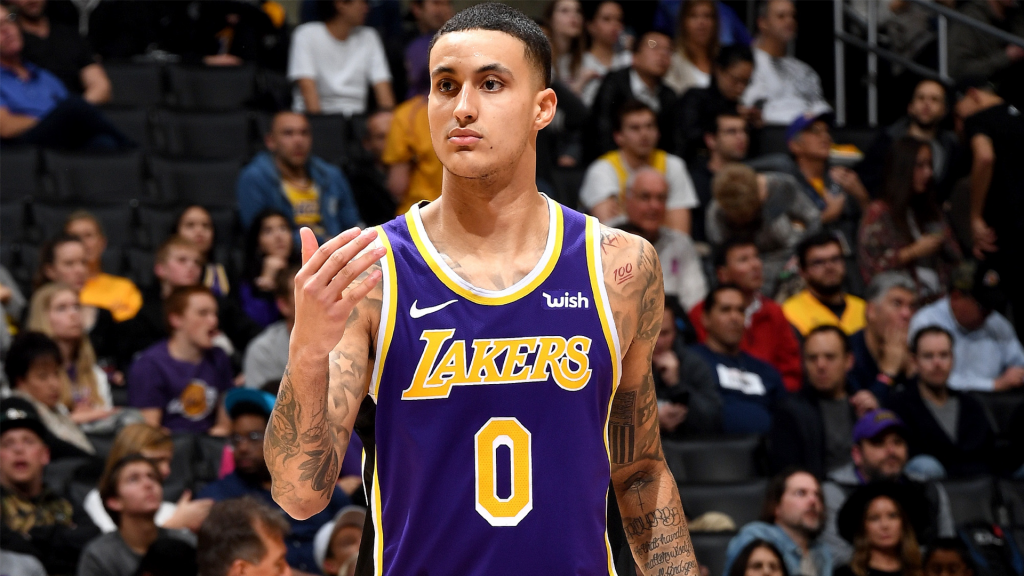 The Los Angeles Lakers finally pulled off a blockbuster trade for superstar big man Anthony Davis this offseason. The Lakers gave up a lot of excellent assets in the deal, letting go of scoring forward Brandon Ingram, playmaker Lonzo Ball and defensive ace Josh Hart. Fortunately for Kyle Kuzma, the Lakers held on to him as they believe that the young budding forward could be the perfect complementary piece for the duo of Davis and LeBron James.

Kuzma should be happy he is still a Laker next season, but he definitely felt a wave of disappointment upon learning that he will be parting with his close buddies. Still, the 24-year old gunner says that he’s glad that his friends will get to show off their true potential and even told ESPN’s Ohm Youngmisuk that Ingram, Ball and Hart were all excited to go to the New Orleans Pelicans.

"It's like 3 a.m., I'm asleep, he ran into my room and damn near threw water on me. For those guys, especially speaking of Zo, BI, they are best when they have the ball in their hands. It is kind of tough when we get vets that are ball-dominant guys. So it  kind of stunted their growth.

They were excited. It’s a little bit less pressure. They didn’t [actually] say that. But obviously being in L.A., there’s more pressure. They can be themselves now. They can go to New Orleans and develop into the superstars they were supposed to be.”

The Lakers’ desire to acquire Davis was never a secret. They almost completed a deal with the Pelicans before the February trade deadline last season, a package that also involved Kuzma moving to New Orleans. It was a back-and-forth negotiation that eventually hit a dead end, prompting the Lakers front office to set their sights for a big offseason this year. The fact that the LeBron and the Lakers didn’t clinch a playoff spot only increased the team’s desire to trade for a generational talent, something that Kuzma says the Lakers front office prioritizes more than spending more time on developing and unlocking the potential of their young assets.

"Really, they told all of us. They didn't want to trade none of us, obviously. We were a great young group of guys that had a lot of promise. Anytime you got three, four young guys as a core in the NBA, you don't want to trade those guys. But you have an opportunity to get a generational talent, stuff is bound to happen."

It has been a busy offseason for Kuzma as well. Along with the roller-coaster ride of the Lakers revamping their roster again, the 6-foot-9 forward is also training with Team USA for the golden chance to represent the nation during the 2019 FIBA World Cup at China. He is also coming off a stellar sophomore season. Even with LeBron manning the ball most of the time, Kuzma still upped his averages to 18.7 points, 5.5 rebounds and 2.5 assists per contest. The only knock on his game last season was that his three-point percentage drastically dropped to only 30%, not a positive stat for someone expected to space the floor especially with LeBron and AD attracting the defense to the paint.

But Kuzma will still maintain a very positive mindset entering next season, even saying that he is capable of being the Lakers’ third star.

"I don't feel no pressure, but I believe that I am capable of being that superstar. I put  a lot of work in. My progress through my journey shows that I can be there. I developed every single year, dating back to college, and I don't see that development  stunting at all.

It will be a challenging season ahead for Kuzma and his teammates. There’s a lot of pressure for the Lakers to succeed and the failure to win the championship should be considered a bust. LeBron isn’t getting any younger, and the fact that Davis is set to become an unrestricted free agent in 2020 should have the Lakers franchise going all-in for the coveted title.

Heat still believes they can manufacture a Wall + Beal deal

The Miami Heat are known for doing everything they can to contend for the playoffs every year, and this season is definitely not an exception. They pulled off a heist when they got two-way superstar Jimmy Butler to commit to the team, while finding a gem in the draft with the selection of sharpshooter Tyler Herro. Apparently, the Heat are not yet satisfied with the current make-up of their roster as they are still in pursuit of Washington Wizards’ star backcourt duo of John Wall and Bradley Beal, per Barry Jackson of the Miami Herald.

“What about the other scenario, with the Heat taking on both Wall and Beal with the understanding that Miami wouldn’t need to give up nearly as much quality in return?

As we reported in early July, that scenario has been seriously discussed inside the   Heat and there’s sentiment to do that, because of how much the Heat loves Beal and because of the internal belief that Miami can get Wall back to All-Star level following   his ruptured Achilles, which is expected to sideline him this upcoming season.”

Of course, the Heat’s priority is still to acquire Beal. It has been their goal to pair Butler with another top-tier star, and the 26-year old Beal is their main target. The 6-foot-5 combo guard put up a career year last season, netting 25.6 points, 5.0 rebounds and 5.5 assists per contest for the Wizards – all career-high numbers. Both Beal and Butler have shown that they can play off-ball, negating any concerns that sharing the rock could be an issue for these two stars.

But with the Heat’s lack of financial flexibility and the inconvenience of not having future draft picks at their disposal (which they have already shipped during recent trades), a straight swap for Beal is almost impossible. Beal is just entering the peak of his career so it’s a natural occurrence that the Wizards would want a bevy of first-round draft picks as return for the services of their All-Star guard. It’s also expected that the Wizards might ask for every young, high-potential asset that the Heat has on their roster – Herro, Justise Winslow and Bam Adebayo. It’s hard to imagine the Heat giving up everything for Beal, especially considering that Beal can enter unrestricted free agency in 2021 if his partnership with Butler and the Heat won’t work out.

That leaves the option of adding Wall to the package as the most feasible way for the Heat to nab Beal. But there’s no doubt that Wall is a risk to take. He only played 32 games during the 2018-19 season, and 41 the season before that. Wall’s Achilles injury could be more serious than the Wizards would like other teams to know, and it’s possible the 28-year old speedy point guard won’t be able to return to his All-Star form.

But if there’s an NBA franchise whose culture and winning history can ignite a star’s downward-spiralling career, it would be the one in Miami.