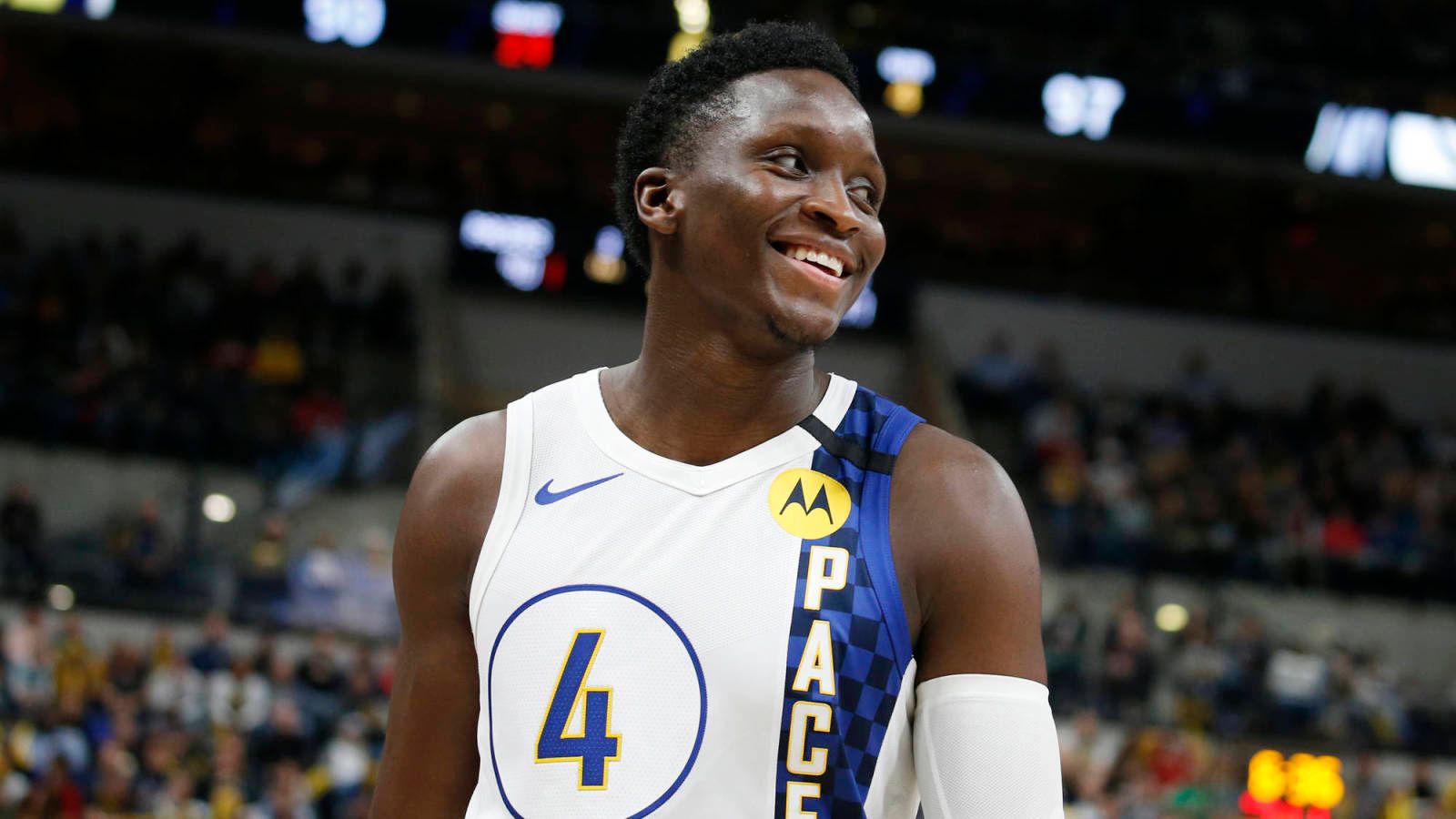 The New York Knicks are entering a new era with a revamped front office and coaching staff. The Knicks hired new team president Leon Rose and new head coach Tom Thibodeau in the hopes of turning the fortunes of the franchise around. However, it remains to be seen whether or not the Knicks will finally make noise in free agency or the trade market after several failed attempts over the past several years.

Following their first-round exit in the 2020 NBA Playoffs, Indiana Pacers guard Victor Oladipo became a subject of trade rumors. Oladipo reportedly wants a change of scenery after a disappointing year in Indiana this season, which came after a long recovery from a torn quad tendon. Although Oladipo has already denied the trade rumors, Marc Berman of New York Post believes that it might not be enough for the Knicks to stop chasing the All-Star guard.

"Putting together a package for younger Pacers’ guard Victor Oladipo is expected to be a higher priority," Berman said of the Knicks' plan. "Reports have surfaced — and have since been denied — that Oladipo prefers a change of scenery. What’s paramount in the Knicks’ potential interest is GM Scott Perry drafted Oladipo while with Orlando and still is enamored. Once Perry falls in love, it’s permanent."

The Knicks have the cap room to trade for a player with higher salary compared to the player that they will include in the package. It is also worth noting that New York has seven first-round picks in the next four NBA Drafts, which would be valuable in possible trade talks.

Berman mentioned a possible package that would send the 2021 and 2023 first-round picks of the Dallas Mavericks, Julius Randle, or Frank Ntilikina to the Pacers for Oladipo. He said that this offer could make Indiana say yes to a deal, but he pointed out that it might not be worth it for New York based on how Oladipo performed this season. He was an All-Star for two consecutive seasons but averaged just 14.5 points and 3.9 rebounds in 19 games this season.

Oladipo was also mentioned as a possible option for the Dallas Mavericks, who are expected to retool their roster and improve the supporting cast of Luka Doncic and Kristaps Porzingis. Tim Cato of The Athletic was one of the writers who campaigned for it several months ago, but he is also now cold of the idea of bringing in Oladipo in Dallas because of the way he played inside the NBA bubble.

"I’ve increasingly divorced," Cato said of adding Oladipo as the third star in Dallas.  "It’s not star power. Doncic and Porzingis at the top of the team is perfectly viable. It’s specific issues, like another ball-handler and the aforementioned wing defense, that will elevate this team to the next level. Oladipo doesn’t shoot well enough. He had one good season beyond the arc that I don’t believe he will replicate again."

How About Bringing Chris Paul to the Big Apple?

Aside from Oladipo, the Knicks are also being linked to veteran point guard Chris Paul, who might become available on the trade market this offseason. It is understandable that Paul is being mentioned as a possible target for the Knicks because of his previous relationship with Leon Rose, who was his former agent.

Not only that, Paul has shown this season that he still has gas left in his tank and can carry a rebuilding team. No one gave the Oklahoma City Thunder a chance this season, but Paul and his cast silence their doubters. OKC finished fifth in the Western Conference standings and pushed the James Harden-led Houston Rockets to a deciding Game 7 in the first round of the 2020 NBA Playoffs.

Paul averaged 17.6 points to go along with 6.7 assists and 5.6 rebounds for the Thunder this season, but his impact is beyond his stats. His leadership helped the Thunder succeed even with a relatively young roster around him. However, one knack on a possible Paul trade is the massive deal of the 35-year-old superstar, as he has two years left in his contract worth around $85.57 million.

Berman said that the Knicks should stop thinking of bring Paul to the Big Apple for the sake of making a big move. He said that a trade for Oladipo would even be better than making a deal for Paul. He concluded that Leon Rose should not "let emotions get in the way" in terms of dealing for his "favorite former client" in the league.

"The Knicks would still be bottled up cap-wise in the summer of 2021 with Paul’s $44.2 million wage," Berman said. "Oklahoma City fired Donovan to get on with a rebuild and should be highly motivated to deal Paul. Randle has to be in any deal with Smith just to get salaries close enough to work, but nobody believes they’d have to also give more than one future first-round pick (Dallas’ 2021), even if Paul was second team All-NBA."

If the Knicks really want to make an impact trade, Berman said that they should reach out to the Philadelphia 76ers about a possible trade for Joel Embiid, who is also another former client of Rose. He thinks that a package including two 2021 first-round picks could entire the 76ers. However, it is worth noting that 76ers new head coach Doc Rivers is set to roll the dice on the superstar tandem of Embiid and Ben Simmons at least for next season.

According to Berman, one realistic option for New York is Paul George. He believes that there is a chance the Clippers would part ways with George after several teammates expressed frustration over the way he handled himself during the playoffs. The fact that team owner Steve Ballmer appears willing to clean the house also won't help the cause of George in Los Angeles.

"Owner Steve Ballmer reportedly was so incensed, he threatened to trade everybody and fire all the coaches. Rivers was the first casualty," Berman said. "The Knicks desperately need a starting small forward since Marcus Morris was dealt to the Clippers. Because of his low-energy defense, Kevin Knox may only become at best a sixth-man scorer. This might be the deal in which the Knicks have to put either RJ Barrett or Mitchell Robinson on the table."

However, giving up assets in a trade for George would be a very risky move for the Knicks. The 30-year-old forward still has two years left in his four-year, $136.91 million contract. However, he holds a player option after the 2020-21 season, which means he could become a free agent in 2021. Several teams are already preparing to make a splash in the 2021 free agency, which means New York might eventually lose him for nothing.

Detroit Pistons Should Keep No. 7 Pick in Draft

The Detroit Pistons are being mentioned in potential trades before the 2020 NBA Draft, which is scheduled on November 18 barring any changes. Detroit owns the seventh pick in the draft, which could put them in a position to add one of the top point guards in the draft like Killian Hayes and Tyrese Haliburton.

However, there were also reports linking the Pistons to a possible trade with the Cleveland Cavaliers. In the suggested deal, the Pistons would send the seventh pick in the draft in exchange for Cavaliers incoming second-year guard Darius Garland before the November 18 Draft.

But according to James Edwards III of The Athletic, the Pistons should just roll the dice with their first-round pick instead of trading Garland. He said that trading for Garland is not a bad idea, but the Pistons needs a guard who is more of a playmaker than a scorer. The Pistons already have a scoring guard in Derrick Rose, who had some sort of a resurgence last season after averaging 18.1 points and 5.6 assists per game.

"Killian Hayes and Tyrese Haliburton are both projected to be available then, and both carry the size and passing ability the organization seems to covet for the position," Edwards said. "Darius Garland, while only 20, is a score-first point guard who doesn’t appear to make players around him better. Of course, that could change with time, but I’d rather take my chances on developing a rookie who, contractually, is further down the timeline."

The said deal would make more sense for the Cavaliers than the Pistons because it will give them an opportunity to draft a young player who does not play the same position as Collin Sexton, who made big strides this season. Sexton averaged 20.8 points to go along with 3.1 rebounds and 3.0 assists this season, while Garland posted 12.3 points and 3.9 assists per game this season.

Cleveland also owns the fifth pick in the 2020 NBA Draft and are projected to select either Israeli prospect Deni Avdija or Obi Toppin, who was the 2020 National College Player of the Year and Consensus first-team All-American awardee this year. Adding the 7th pick to their fold would give them another promising prospect or they can package the 5th and 7th pick for a marquee player, who could speed up their rebuilding process.