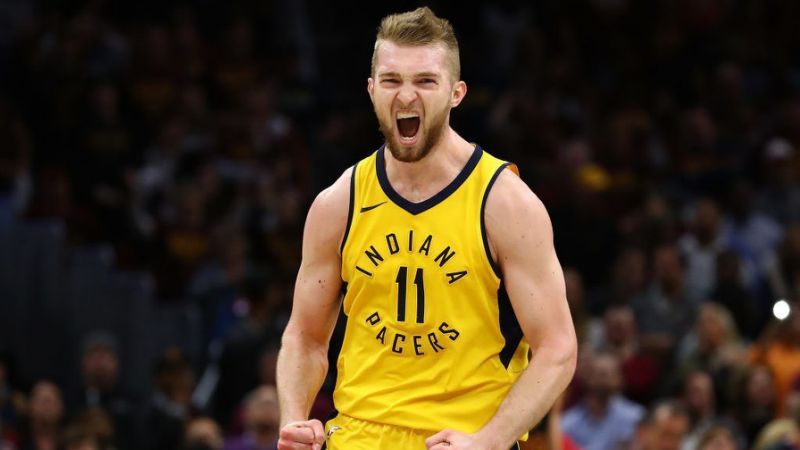 Just a couple of weeks ago, trade rumors regarding Indiana Pacers young budding combo big man Domantas Sabonis swirled on social media. There’s no denying that the Lithuanian star has All-Star capabilities, not to mention that he is only 23 years old. But there are still questions as to how he can effectively mesh with Myles Turner, another promising center on the team. Although Sabonis has the advantage in terms of his already-developed low post offense, he and Turner almost play a similar inside-outside game.

However, those trade speculations were quickly shot down by the Pacers front office. Sabonis has now signed a four-year, $77 million contract extension, as per a report from the ESPN. Here’s Sabonis’ statement after the extension:

"I'm very excited to remain with the Pacers, this is where I wanted to be. I appreciate the organization showing their confidence in me; and I'm ready to be part of what's going to be a great year for our team."

Sabonis is coming off a near double-double season that saw him produce 14.1 points, 9.3 rebounds and 2.9 assists per contest. A lefty big man with a solid mid-range touch combined with a good playmaking ability, Sabonis’ overall skill set perfectly fits the pace-and-space system that we have in today’s basketball. In the 74 games he played last season, he only started in five nights. However, the Pacers have made it known that they will begin putting Sabonis in the starting line-up this season and have him alongside Turner in the frontcourt.

Chad Buchanan, the Pacers’ general manager, told the Indianapolis Star that shipping Sabonis away was just a last resort for both camps.

"There's talk going on between all 30 teams constantly, 12 months out of the league. It  was never our intention to trade Domas. It was an absolute last resort, something he  didn't want, we didn't want. I know that came out as a possibility but that was never our intention. Never even a remote possibility for us. An absolute last case, worst-case scenario."

The Sabonis-Turner frontcourt duo performance should make or break the Pacers’ case for playing them in the same court at the same time. In their first game of the 2019-20 season against the Detroit Pistons, both big men already showed out what they can do. Sabonis pulled off a double-double outing of 27 points and 13 rebounds, while Turner turned in a stellar all-around game of 25 points, 9 boards, 2 steals and 3 blocks. Behind their two big men, the Pacers had a solid chance to win as they entered the final period with a three-point lead. But their defense crumbled a bit as the Pistons ran them off in regulation, dealing the Pacers their first loss of the year.

“I really thought they played well together. They’re both low-ego guys, so you could see they pass really well back-and-forth to each other, and they both defended at a high-level.”

Of course, the Pacers are playing without injured superstar guard Victor Oladipo. There’s still no timetable to Oladipo’s return, but there are speculations that he may come back as early as December. Sabonis and the Pacers will try to bounce back against the Cleveland Cavaliers this Saturday, and will have the chance to get even with the Pistons on Monday.

Miami has been shopping Waiters since last year

The Dion Waiters drama saga has hit a new low, and this could be the tipping point that may make or break his relationship with the Miami Heat. The flamboyant combo guard has been suspended by the Heat during their season opener against the Memphis Grizzlies. Heat’s president of basketball operations Pat Riley released a statement on the Waiters suspension, as per the ESPN.

"There were a number of unacceptable incidents this week, culminating with his unprofessional conduct on the bench last night. As a consequence, I feel we had to suspend him."

It’s such a shame for the Waiters-Heat partnership to turn out like this. Waiters, who was signed by the Heat to a lucrative four-year, $52 million contract in 2017, could have been the team’s starting shooting guard this season. But the Heat’s coaching staff apparently takes more liking to rookie wings Tyler Herro and Kendrick Nunn especially now that they are giving defensive ace Justise Winslow more freedom with the ball to develop his playmaking skills.

Still, this issue isn’t something new for Waiters. Last season, the Heat also punished him through a fine when he voiced out his frustrations on his role, per Barry Jackson of the Miami Herald.

“[Expletive] patience! I want to play. I’ve been patient long enough. What do I got to be patient for? Come on man. I’ve been patient. I think everybody knows that. It’s time. What are we waiting for? If I’m out there, play me.”

A combo guard who has the excellent offensive skills to be successful, Waiters averaged a decent stat line of 12.0 points, 2.6 boards and 2.8 assists last season. However, Waiters only played 25.9 minutes per game that year, his lowest since his stint with the Cleveland Cavaliers during the 2014-15 season.

Another recent update to the situation that makes it more interesting is the fact that Waiters will not join his teammates when they embark on a two-game road trip against the Milwaukee Bucks and the Minnesota Timberwolves. While it was reported that Waiters will only serve a one-game suspension, his absence in the road trip should be a cause for more questions down the road.

Furthermore, the Heat has been trying to trade Waiters for a year now. It’s safe to say that the 27-year old guard doesn’t pack a high trade value, making it hard for Miami to find a suitable trade partner. But with this situation at this early part of the season, it won’t come as a surprise if the Heat gets more aggressive and just look at a Waiters’ trade as a salary dump move.

Despite the fact that the 34-year old All-Star point guard is starting the season playing for the Oklahoma City Thunder, it doesn’t change the team’s stand on exploring trade possibilities for Chris Paul. The Ringer’s Kevin O’Connor recently reported that the Thunder is still bent on shipping Paul, although the franchise may find it really hard to gauge the veteran’s value in the market.

“Finding a new home for Paul will be tough. He’s 34, has an injury history, and is owed $124 million over the next three years. That deal is terrifying. Paul can help himself and the Thunder out by excelling this season. All it takes is one team to bite.”

Aside from Paul’s declining performance, he also packs a very massive contract that should prove to be too much for other teams. For the Thunder, they could try working out Paul’s chemistry with his new teammates but it’s hard to fathom how their roster will make noise in the stacked Western Conference. They have lost their first two games of the season, although Paul had an outstanding debut as he finished 22 points, 8 rebounds and 3 assists during their five-point loss at the hands of the Utah Jazz.

Moreover, the Thunder is more inclined on developing the team’s younger point guard, Shai Gilgeous-Alexander. Paul’s presence on the line-up could be helpful in mentoring Gilgeous-Alexander, but he could also eat up on the young guard’s usage rate on the floor. If the Thunder keeps on losing more games at the first half of the year, it should be expected that they will turn the corner and begin a full rebuild.

Among the rumoured trade partners that the Thunder could engage for Paul’s services are the Heat, the Wolves and the San Antonio Spurs.